Halloween is upon us. This year, instead of investing in a cheap costume you’ll use only once, why not drop the dress-up budget on a costume that will keep on giving… one that doubles as outdoors gear. Spurned by a Gear Junkie Twitter follower who commented on a Kokatat dry suit looking like a perfect Halloween getup, we present here a few options, a half-dozen Halloween costume ideas culled from the Gear Junkie archives that can do trick-or-treat!

In the top image, from left to right, we have the retro-grunge look going with Burton’s GORE–TEX-based U.S. Snowboarding Team 2010 Olympic uniform; the Sea to Summit Packable mesh suit (click and scroll down) with Permethrin treatment, good for flies and scaring small children; and I/O Bio Merino’s Pilot Suit, a base-layer union suit that’ll wick sweat, insulate, and keep you looking like a Ninja running through the night. Here is the unconventional — but fully surf-ready! — RDT Star Trek wetsuit; Spock ears not included. The uber-cozy — and Mount Everest ready! — Eddie Bauer First Ascent men’s Peak XV Down Suit (click and scroll to end) offers a marshmallow-man look with the added advantage of extreme high-wind protection above 8000 meters. And for speed on the ski slopes as well as that happy All American Skinsuit look outdoors on October 31, the Spyder 2010 Winter Olympic Skier Speed Suit is a viable costume option you might consider hard. The Canada Goose Snow Mantra Parka is in the running as the World’s Warmest Winter Coat. It has a large tunnel hood with a coyote-fur ruff and a certain disembodied look that comes only with a parka stuffed inches thick with pounds of goose down insulation. Tip a boat in cold water and your core temp can immediately plunge. The Kokatat GORE–TEX Front Entry dry suit will keep you safe — and it can swing a superhero theme on Halloween night.

Another Goose option, the exclusive “Yuki Expedition” parka from Canada Goose is a cousin of the Snow Mantra, though tweaked with some rare style by Japanese-born fashion designer Yuki Matsuda. It costs $1,750 but immediately qualifies in the crossover costume category with its touted “eastern sensitivity and a street-funk orientation.”

During testing, the Osbe Proton ski helmet, at left above, got continually compared to the namesake character of the movie Robocop. It might be a stretch (and a risky use of a pricy helmet), but with a little creativity the helmet could come close enough to recreating the fictional character. Just add some kind of shiny shirt and pants. 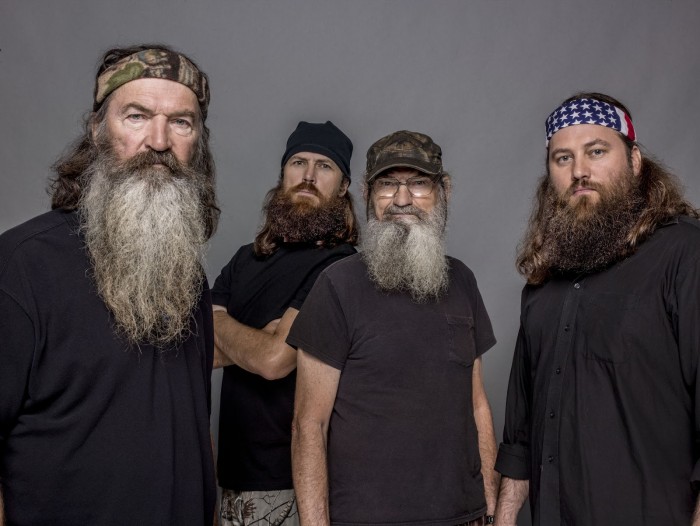 The dudes from Duck Dynasty are easy fodder for Halloween costumes, so long as you’ve got some spectacular facial hair (or a great fake beard). Just add a black shirt and camo hat or American flag bandana. Round out the costume with a duck call and you’re good to go. Last, for the minimalists out there, Vibram offers an idea via two buff naked athletes tattooed and scrawled upon with observations about “natural running movement and the maladies of the running shoe industry.” Scariest of all? Look at their feet. “Fingers for toes,” trick or treat no doubt.