Pour water through a small slit in back. Then put this hat on and feel the cooling effect as water sloshes around while you run. 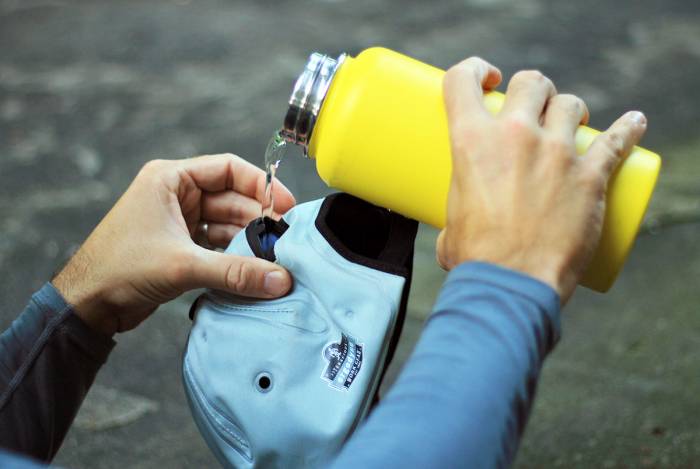 The cap works as a cooler for the head. Cold water moves around inside a thin shell, putting a heat-reducing effect right against your skull.

Founded in 1983 Minnesota-based Ergodyne is a major brand for workers on job sites. As such, this hat is marketed to people in construction, landscaping, and anyone standing or working outside in the sun.

We tested it because the design is unique and the brand is beginning to look at products for outdoors enthusiasts.

For outdoors recreation, the hat was effective on very hot days, but less so when the temps were below about 80 degrees. It creates a dome of coolness and protection from the sun when it’s blazing outside.

At $66, it’s expensive. And for outdoorsy types, the applications are limited to more stationary (less aerobic) pursuits, like fishing and boating.

You can feel the evaporative effect in a subtle way, and the hat is akin to a damp washcloth draped on your skull.

Ergodyne explains that the cooling process activates by water and airflow — body heat and the surrounding air cause water within the hat to evaporate, cooling the wearer down.

The hat’s material is somewhat stiff, and the effect is strange. Liquid sloshes a bit like a waterbed up there, which you can feel as you walk.

Cooling Hat: How It Works

The Dry Evaporative Cooling Cap uses a patented technology that differentiates it from competitors’ cooling caps. There is an interior membrane that serves as both sponge, absorbing the water, but also as an evaporative, moisture-wicking material that helps push the water outward.

Ergodyne’s shell material is a unique weave that allows moisture to escape from the inside, but does not let any moisture to enter from the outside. It has a similar makeup as Gore-Tex material, a brand representative noted.

For a different take, and to put the hat through the reviews wringer, I also tested it while on trail runs this summer. One time, when the mercury moved above 90 degrees, I slipped a couple ice cubes inside.

As it turned out, with ice inside I needed to remove the cap because my head was too cold! It felt like an ice cream headache at first. After the ice melted a bit, the cap was set for the hot day.

Not for Every Day

On humid days the design proves less useful, as the evaporative effect decreases. Ergodyne added large vent holes, but the rest of the material is non-breathable.

That material makes the hat clammy when you trail run or exert on a mountain hike. Thus, it’s not made for high-aerobic pursuits.

You’ll notice the feel differs, thanks to an “industrial-grade” nylon that’s durable and stiffer than a normal hat. It weighs about 5.5 ounces when filled with water, which is heavier than a mesh hat but lighter than other cooling caps on the market.

Who should buy this cap? If you’re in hard-core heat standing around, add some cold water to the zip-shut valve and you’ll get some immediate on-the-head relief.