KUIU’s Limited Edition Women’s Collection could have hit the mark, but the lack of true outerwear is apparent and the inherent message speaks for itself.

The hunting industry is not exactly known as the most progressive or forward-thinking industry. But moves are consistently being made in the right direction. With brands like Sitka Gear, First Lite, and Prois Hunting creating complete lines of hunting wear for women, many looked to KUIU to follow suit.

So KUIU answered with a limited-edition women’s collection. Read on for our take on the matter.

A Mission in Question

KUIU’s mission to create the lightest, most advanced hunting gear on the market misses one giant point in the world of progress: considering your audience and hunting demographics at large.

Originally, this goes back to an on-the-record quote from the late Jason Hairston in a Men’s Journal piece in which he stated the following:

Hairston’s legacy lives on, as he certainly played by his own rules — much to the joy and chagrin of others. He was an incredible hunter, an elite athlete, and a take-no-prisoners personality that found a great deal of success making true mountain gear for hunters.

And according to KUIU marketing director Patrick Mayer, this particular quote was tongue-in-cheek. Mayer told me this over a phone call we had this past June. He’d responded to an Instagram photo I posted. I called the brand out on its lack of support for women hunters and its weak stance on public lands. And within a few minutes, I was on the phone with Mayer and his social media manager. It was an impressive turnaround.

We heard each other out, but not without argument. KUIU has its own take on conservation — on that we agreed. And Mayer’s response to the pushback on women was that they did, in fact, have a limited-edition women’s coat in stock. We ended the conversation as amicably as people can under some fundamental disagreements, and Mayer sent me the coat they had in stock.

Editor’s note: Although Hairston also founded Sitka, he left the brand before it launched its high-quality women’s line. 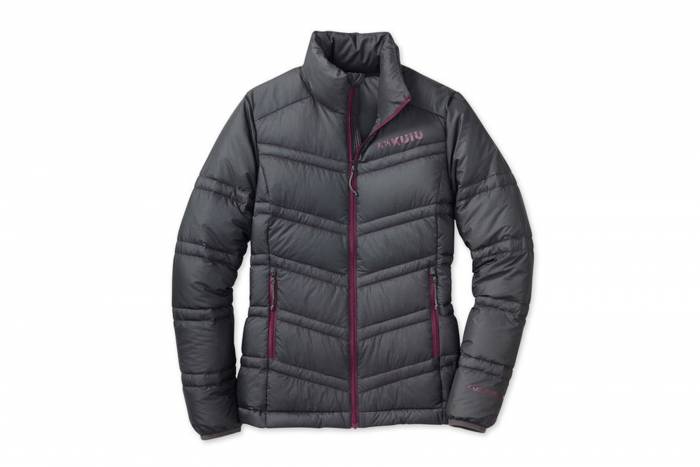 The original piece in the brand’s limited-edition women’s line is the Women’s Super Down Ultra, and it came out in a crew and hooded version in 2017. It’s meant to be a layering piece, and at sub-7 ounces, it’s the perfect piece for cold summer nights in the backcountry or an extra bastion of warmth beneath true outerwear.

The jacket might not be water repellent, but the down is. And I’ve worn it in multiple conditions to my own satisfaction. My favorite way to wear the piece is as a double layer against cold nights in my sleeping bag. My only technical gripe? The zipper was a bit flimsy.

This brings us to KUIU’s new line.

The Medium Is the Message

This whole line whispers of something that I felt within the first coat. It’s a layering piece that won’t actually get you through a hunt.

The brand added a down vest, a crew-only Versa Insulated jacket, and a base camp sweater, in addition to a line of T-shirts, hoodies, and other shrink-and-pinked cotton wear.

Where’s the rain gear? Where’s a pair of durable pants that can hold up in brush and snow? Even kids get a hooded version of the Versa that can actually get you into the field. Why just a crew?

Give me a women’s version of the Talus Hybrid Pant paired with something like the Kenai Ultra Hooded Jacket, and I’ll actually be able to get it done in the field. We’ve got the buying power, and we’ve got the numbers. What’s the issue, my dudes?

If KUIU is attempting to keep women out of its line of vision, there’s no better way to do it than by creating a line with no true outerwear. And outerwear is what KUIU does best. Unfortunately, there’s not a single piece in the collection that would keep me hunting in the hills in any sort of weather.

I mean, it might keep me warmer, but that’s probably just to save my hunting partner from my “I’m sooo cold” complaints.

That, my friends, is tongue-in-cheek.

But the Message Speaks for Itself 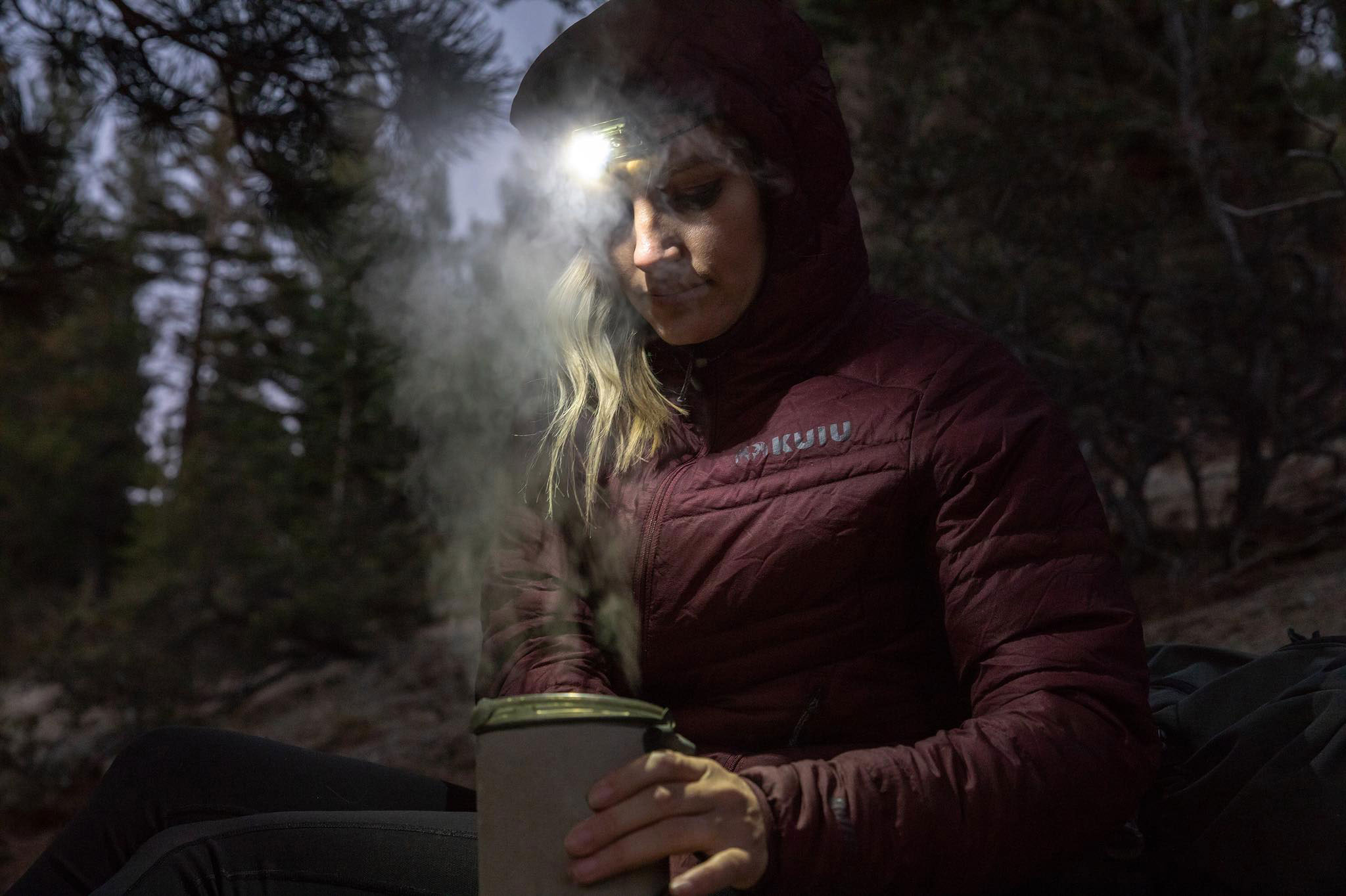 This whole attempt really didn’t have to be that bad. Okay, KUIU tried. I like the down coat for a few uses. And while the lack of true outerwear is an issue, it’s not that big of an issue. It certainly wasn’t newsworthy, maybe worthy of an eye-roll. The collection itself wasn’t the true kicker for me.

She lets you hunt, she hunts with you, and she lets you buy KUIU. Don’t be selfish and get your significant other the same gear that you rely on the most. These items are limited edition and will only be in-stock for a short time, so get them while you can. Plus she will look good and be incredibly comfortable.

Those words launched the page of the “Women’s Collection” on KUIU’s site. KUIU changed the copy after a couple days. But the message was out.

If there’s a more backhanded way to besmirch the female hunter, it would be implying that women hunters can’t be aspirational. And KUIU as a brand has already accomplished that. Now they’ve relegated us to controlling significant others who will “look good” and “be comfortable”! OMG! Yay!

KUIU makes good gear at affordable prices. It has a business-to-consumer model that significantly cuts cost to the end user. I know plenty of hunters that are diehard #KUIUNation, and it’s because the gear holds up. It creates outerwear for harsh country with the mountains in mind. I know women that wear the men’s gear because it works. The jump into women’s gear seemed to be a no-brainer.

When Mayer and I talked, he clued me in that KUIU was working on this extended women’s line. I held out some hope for change. Maybe I’d be seeing some badass women representing yet another quality brand in the hills in affordable gear. I thought perhaps I’d be seeing women featured on its beautiful and entirely male-dominated Instagram feed. They’d be chasing Dall sheep and going after big dreams under western skies.

Alas, this new attempt at a women’s line is the opposite of that. Instead, it seems to provide the perfect scapegoat for the KUIU crew to say, “See? We did it. Are you happy now?”

The short answer from this hunter is no. Not only did you fail to create a women’s line with any sort of hunter in mind, but your message doubly affirms the disrespect. The mustard hath not been cut. Do better next time. Or don’t do it at all.

Up Next: Compost Your Jacket? PrimaLoft Launches Biodegradable Synthetic Fabric