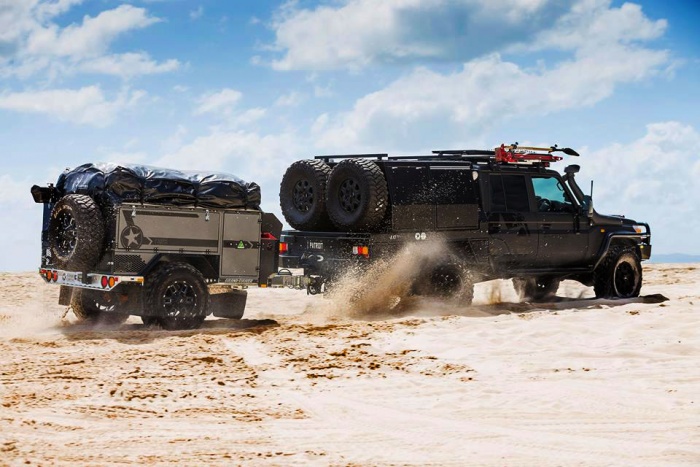 If your idea of a camping vacation involves an engine snorkel, or if you think near-vertical rock faces look like parking spaces, this, my unhinged friend, is the trailer for you.

Being stranded in the jungle would be a bummer, but if you were driving around in this, it would definitely be less of a bummer, and you probably wouldn't get stranded at all. Read more…

With the launch, U.S. customers can order two of the brand’s trailers, the X1 and smaller X2. Sadly, Patriot’s overland trucks (see above) are still an ocean away.

The flagship trailer in the Patriot stable, the X1 offers the most space and standard features within the brand.

For living: A pop-up awning and tent contain a lofted king-size fold-out mattress. Integrated tent poles pitch the bug screen and canvas tent walls. Plus, the awning and walls that encase the kitchen and storage area feature LED lighting for moving around at night.

There’s no bathroom, but the X1 does have an outboard hot-water shower. And the hidewaway kitchen is comprehensive: Pull out trays reveal a 5.7ft.³ fridge, two-burner gas stove, kitchen sink, stainless steel workspace, cutlery drawers, and wet storage. 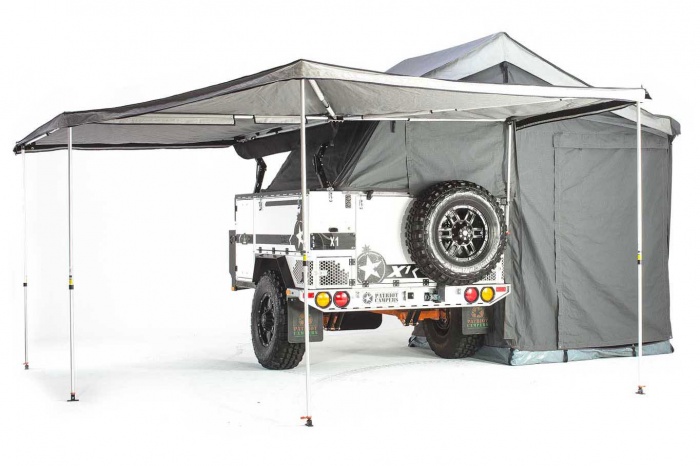 Plus, it can carry up to 1,200 pounds of gear and equipment—two-thirds its own weight. Despite being rugged, a full monocoque aluminum body keeps the total weight under a ton. 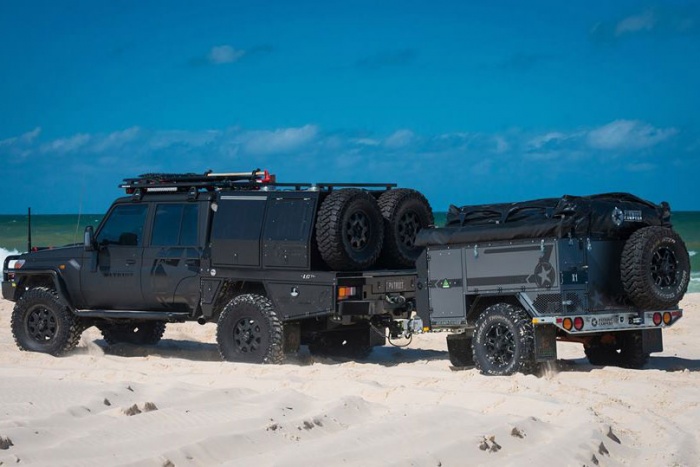 Once parked, the adjustable air suspension lowers the X1 from drive (crush) mode to camp mode. And the whole shebang draws power off of two 120-Ah batteries with solar-compatible charging.

For thriftier overlanders, the X2 offers a smaller, scaled-down version of the X1. It’s designed more for weekend excursions, hauling gear instead of housing a family, and being less of a burden on the budget.

For living: Unlike the X1, there’s no awning standard. Instead, the deck fits various aftermarket roof-top tents, or it can be used to carry watercrafts, bikes, and/or tents.

The gas stove is standard, but hot water and shower are optional add-ons.

For driving: The X2 remains capable despite its smaller stature. It sports 18 inches of ground clearance, a 35-degree departure angle, and independent coil suspension.

Exploration Outfitters has the X2 starting just under $21,000.

Patriot Campers offer a lot of versatility and capability in a relatively lightweight, compact package. Its reputation translates to a hefty price tag. But if you can afford it these make for a stout off-road camping companion.

Especially since it’s no longer a world away.

Up Next: If You Can Afford A Yacht, Check Out This Mercedes Overlander

Saving…
If You Can Afford A Yacht, Check Out This Mercedes Overlander
Hitch-Mountable: ‘Rooftop’ Tents, Down To Earth
×