Didn’t think skiing could get any cooler? Watch Frédéric Fugen jump out of a helicopter at 21,000 feet with skis and a parachute on.

Frédéric Fugen is a French skydiver, wingsuit pilot, and BASE jumper who just cranked skiing up a notch or two. Fugen competed for France’s national freefly team, winning the first of many World Championships in Brazil in 2004. And for 5 years after that, his title remained undefeated.

Frédéric Fugen is innovative. He’s always looking for more extreme ways to jump out of airplanes, helicopters, and off of cliffs. He’s been lauded as one of the most talented skydivers, BASE jumpers, and wingsuit fliers on the planet. And now he’s taking those sports even further by combining them with skiing.

In this short, thrilling clip, you’ll see what we mean. Fugen jumps out of a helicopter somewhere around 21,000 feet above the ground, free-falling with skis on, pulling some tricks as he descends, and pulling his parachute as he careens toward the blue and white mountains below. His chute deploys and he paraglide-skis onto the La Clusaz slopes in the French Alps.

It’s one of the most insane things we’ve ever seen at GearJunkie. Frédéric Fugen is pushing the limit. 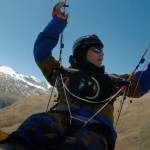 Paraglide Skiing Across the Swiss Alps: 'A Sam Anthamatten Story'

Spotlight on Sam Anthamatten as he makes an attempt to paraglide from Zermatt to Obergabelhorn's north face. Read more…