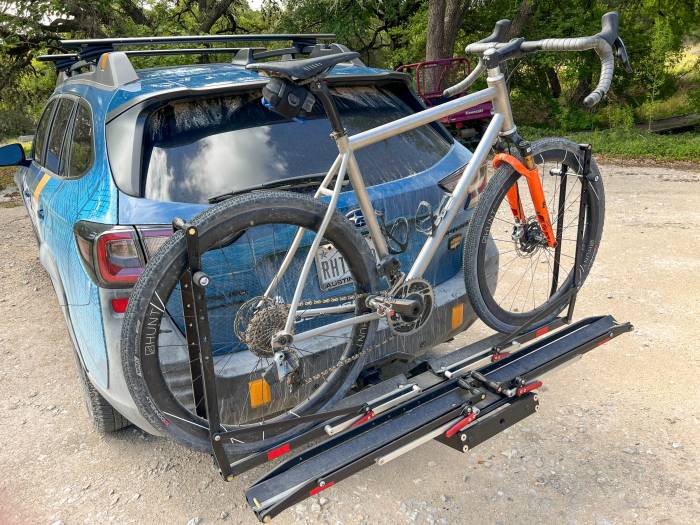 The 1UP USA 2-inch Super Duty Double hitch rack is hands down, the burliest bike rack I’ve ever used. And I’ve had a bike rack on my car for over 35 years.

Since 2001, 1UP has quietly strived to make the best and most durable bike racks right here in the USA, and it’s apparent that the brand refuses to cut corners. Extruded aluminum construction, stainless steel hardware, and the anodized finish portray engineering and manufacturing choices aimed at strength and longevity over all else. Everything resists corrosion and rust, and every part bolts on, making replacing components not only possible but easy. And when you pick up a 1UP rack, you feel the robustness and quality; my 2-inch Super Duty Double hitch rack weighs 47 pounds — nothing flimsy here.

I tested the 2-inch Super Duty Double over 6 months, and it was mounted to a Subaru Outback Wilderness. My daily commute involves 2 miles of rough and rocky dirt roads. I made several forays into other jarring landscapes, including washed-out mountain passes in New Mexico. The rack secured high-end road, gravel, and mountain bikes during the test period.

In short: The 1UP USA 2-inch Super Duty Double hitch rack is the most rigid and durable bike rack I’ve ever used. The bomber materials, construction, and replaceable parts will allow it to outlast the vehicle to which it’s mounted. And the bike securement system, which uses two wheel arms, ensures bikes last just as long. Bicycles cannot become free with anything short of a catastrophic wheel or rack failure, and nothing touches the frame, fork, or componentry — saving their finishes from wear.

1UP bike racks may look plain and understated, but even a casual visual inspection reveals undeniable quality. Extruded aluminum dominates the hitch rack; the only non-extruded part is the welded 6061 T6 billet aluminum hitch bar. Closer inspection reveals stainless steel hardware, down to the springs for the levers that release the wheel arms from the ratcheting mechanism. The only plastic components are one bushing to allow freer movement into the folded position and the reflectors.

Only two bolts on each wheel arm are not stainless steel; they are Grade 5 yellow zinc. These bolts connect each wheel arm to the bike tray and the bolt that secures the tire spools. Engineers specified this material for these particular locations to prevent galvanic corrosion. Also, these bolts are the ones most likely to be replaced over the life of the rack, and zinc bolts cost much less than stainless bolts.

All the aluminum, other than the wheel trays, is protected by anodization. The wheel trays are powder-coated (1UP offers silver and black finishes).

Every 1UP 2-inch Super Duty Double rack component is replaceable with hand tools. The only real wear components are parts of the ratcheting system that holds the wheel arms in place, and they only require turning a few bolts to remove and replace.

1UP created the double wheel arm system, which is now widely used by others. Two bent arms engage and apply inward and downward pressure to the tires. Nothing touches anything other than the tires, sparing commonly fragile finishes on carbon frames, forks, and wheels. The rack accommodates wheels from 16 to 29 inches in diameter, tires up to 3.1 inches wide, and a 54-inch wheelbase.

Mounting a bike on the rack couldn’t have been easier. I just opened the wheel arms, placed both wheels on the bike tray, and closed the arms until I saw the tire deform slightly. I could open the wheel arms with a single hand while holding the bike with the other. Once I had one wheel arm in place, I could let go of the bike completely.

The ratcheting mechanism and notched bar secured the arms against the tension created by squeezing the tires. At first, I would put as much pressure on the tires as possible, thinking that this would make them more secure. But after a few uses, I realized that smashing the tire to the rim isn’t necessary. A small tire deformation was all that was required.

This was the first bike rack I used that didn’t touch the frame, fork, or rim (no wheel straps), which was a relief since the bikes I ride are usually not mine and are on the higher end of what brands offer.

The front wheel oscillated in strong winds about the steering head axis, but there was no physical way for the bike to release other than a catastrophic rack or wheel failure. Some found the movement unnerving (including those driving around me), but again, there was no way for the bike to release. The oscillation was much worse with road tires than with wider gravel or mountain bike rubber. 1UP does offer a plastic snap-on “wheel saver” that cradles the tire to reduce the wheel movement, but I didn’t test them during this review, nor did I feel they were necessary.

The wheel arms have a series of holes that accommodate locking pins. So each bike can be locked at each wheel. It was the quickest way to lock a bike to a rack I’ve used, as there was no cable pull out and thread. It was also visually apparent that the bike was locked at both wheels (wheel locking pins sold separately). The rack can also be locked to the hitch with a shorter version of the same locking pin, which 1Up includes. The brand also sells other security options.

The 2-inch Super Duty Double folded so that the wheel trays were vertical and could also be set at an angle in between so I could open my hatch without completely folding it out. This allowed me to open the rear hatch without entirely unfolding the rack and made reaching into the back of my car easier.

The 1UP 2-inch Super Duty Double was flat-out rigid; by far the most rigid bike-carrying system I’ve ever used. I live over 2 miles down a rocky dirt road. I’ve seen less substantial racks with 14-pound superbikes sway and vibrate so badly that I’ve gotten out several times to ensure the rack was secure in the hitch and that nothing had broken.

No such worries with the 1UP. Looking in the rearview mirror never enticed me to slow down. And following others with the same rack reinforced the confidence that the 1UP has no equal in rack rigidity. The corner expander ball eliminated all twisting, rattling, or any other motion of the hitch arm within the hitch receiver. And the extruded aluminum construction provided stoutness I’ve never experienced on a vehicle bike rack.

1UP rates the 2-inch Super Duty Double for off-road use with 225 pounds of total carrying capacity (50-75 pounds per bike). This puts it squarely in e-bike territory. And in my opinion, it’s straight-up overbuilt for carrying other bikes.

I jumped on my 1UP hitch-mounted bike rack to test the hitch arm interface and overall stiffness, and I felt the 300-pound-rated hitch would break before any part of the bike rack would fail. This is one of those products where my eyes didn’t deceive me; indeed, the rack felt as burly as it looked.

The cost of all this rigidity and robustness was the weight. At nearly 50 pounds, it may be cumbersome for cyclists who attach and remove their hitch rack often.

In addition to replacing parts, the bolt-together construction of the 1UP 2-inch Super Duty Double has another advantage: modularity.

Up to two more bike mounts can be added for a total carrying capacity of four bikes at up to 50 pounds each. A cargo tray can also be added, which takes the spot of one bike tray with a rated load depending on how many bike mounts are in use (75-125 pounds). Logically, these additions would add weight to an already heavy hitch rack.

1UP also offers spacer kits so the wheel arms can accommodate tires wider than 3.1 inches. License plate holders, with or without LED lights and also be added. And for those heavy e-bikes, 1UP has a matching ramp.

1UP even makes a matching bottle opener (a must-have) and custom anodized kits to add dashes of color. The brand sells many other rack accessories as well.

Final Thoughts on the 1UP USA 2-Inch Super Duty Double

At an MSRP of $680 for silver and $730 for black, the 1UP 2-inch Super Duty Double bicycle hitch rack is a significant investment, but the pricing is similar to other high-quality double bike hitch racks. Regardless, do you know what else a considerable investment is? Your potentially $10,000+ bicycles. Also, factor in the probable liability should a bike launch off the rack.

I have jettisoned two bikes off of lesser racks. I didn’t own either bike, which would have made it worse should they have been destroyed. One was a $13,500 road bike that broke free on the dirt road right outside my house. Luckily it landed flat on its side with no real damage. Incredibly, I didn’t even have a scratched brake lever. My luck dumbfounded me. 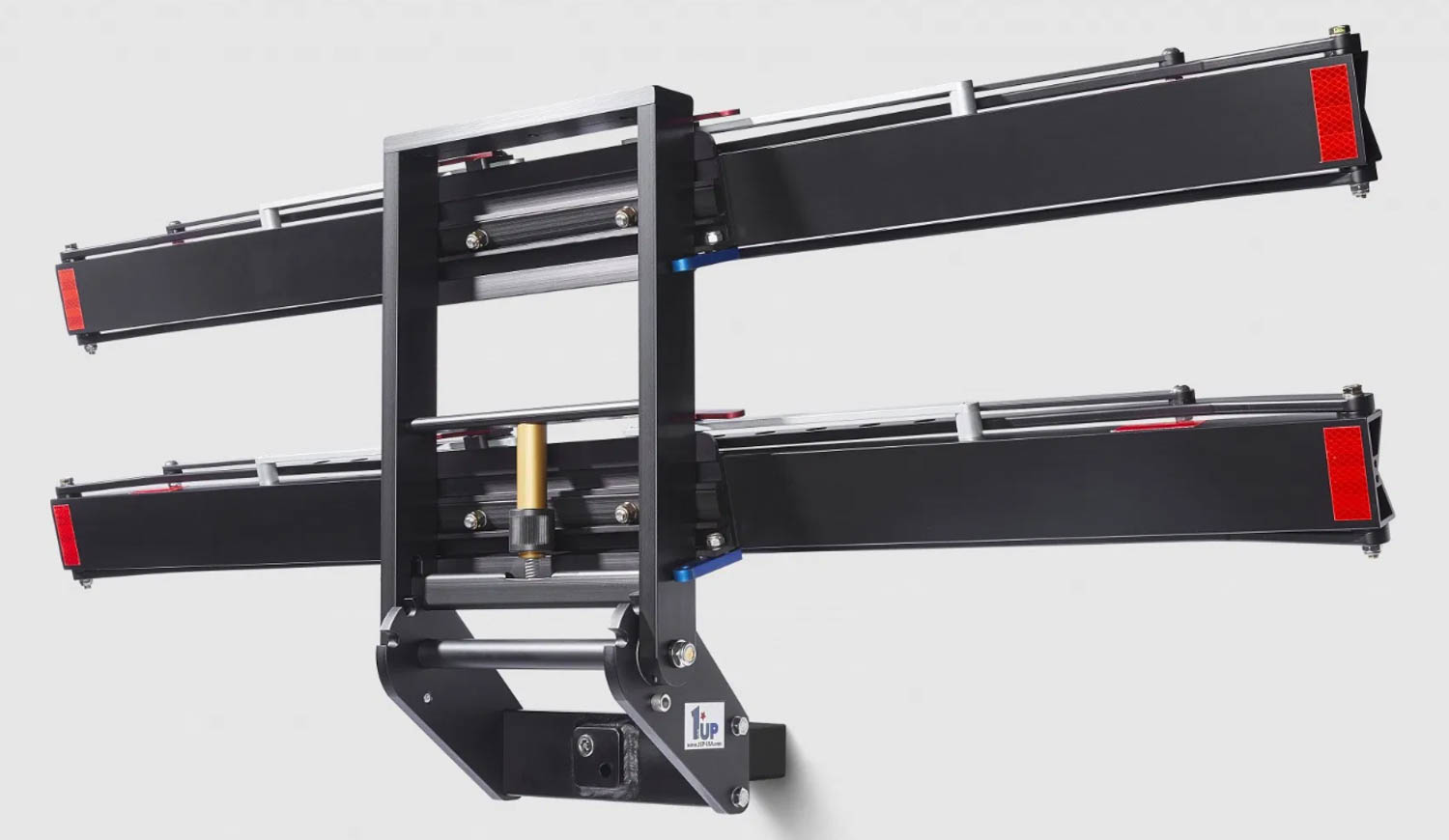 The other was an $8,000 mountain bike. I was on a one-lane country highway, and fortunately, by the time I stopped, the bike was dangling by a rear wheel strap off the side of the car. The factory roof rack, rear derailleur, and derailleur hanger got damaged. But the overwhelming concern was I had traffic behind and beside me. If that wheel strap had snapped, or the bike had flipped into the oncoming traffic lane, the potential liabilities could have been massive.

1UP designed the Super Duty Double to be “rugged and no-hassle.” I found this to be precisely the case. The rack was much stiffer, stronger, and more robust than I imagined. I’ve never owned or used a bike rack that’s even close. And the double wheel arm system was tops in bike retention while causing the least amount of fumbling when getting the bike on or off the rack.

The wheel oscillation in high winds was visually concerning to some but was not indicative of the bike’s security. And the considerable heft of the rack might prove troublesome to those who constantly attach and remove their hitch rack. Finally, for some, the understated looks may be a turn-off.

But I know that this will be the last hitch rack I will own. As long as 1UP USA stays in business and can supply parts, I never see this rack going anywhere but on my car. And after my bike-launching experiences, I’m done relying on fortune to defend bicycles and other drivers from harm. The longevity and bike security make the initial investment in the 1UP 2-inch Super Duty Double more than appropriate for me. 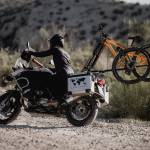 Can you carry a bicycle on a motorcycle? Yes, you can! Let's look at motorcycle bike rack options, pricing, and considerations. Read more…