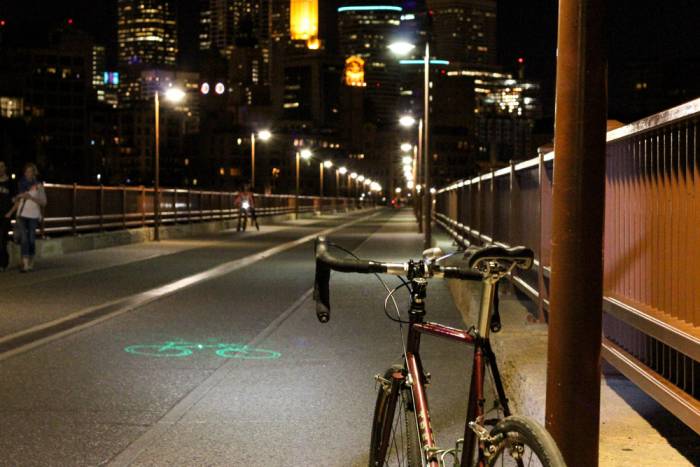 A laser beam projects the image of a bicycle on the road ahead. That is the unique concept behind the Laserlight by London-based Blaze. 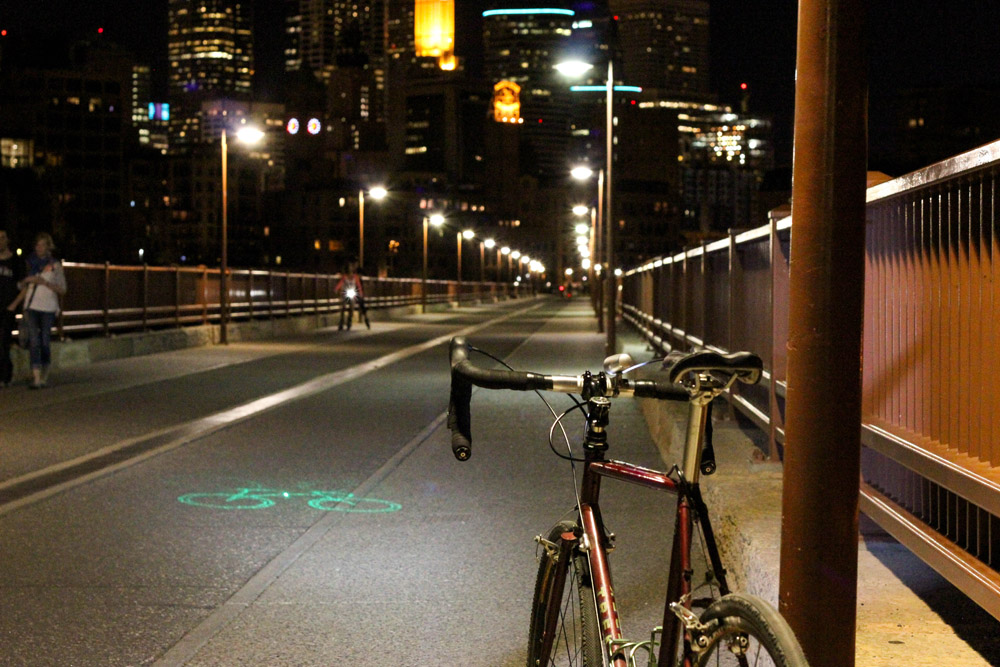 For the past few weeks, I have put the Blaze light to a test riding in the dark of night in Minneapolis. It is built for city environments where traffic and bikes mix.

My first test: I watch with amazement as a laser-generated biker bobs and shifts, superimposed on a dark road ahead. Cars streak past, their headlights igniting the road.

Blaze built the Laserlight to keep you more visible biking in the dark, calling it the “safest bike light on the market.” That is a bold statement, and it was the concept I planned to put to the test. (See my mixed feedback below.)

For that price you get a bright (300 lumens) light with a rechargeable battery. Its run time varies from two to 29 hours depending on the power setting, and whether the laser is on, off, or flashing.

The green laser feature is a side benefit the brand touts can “make your presence known, alerts drivers to your approach, and lets you be seen when you’d be otherwise invisible.”

It does do some of that. But after a couple months testing I was not completely sold on the laser function.

People in cars can see you a bit better with this setup. But the laser light is not particularly effective — on more than one occasion, while waiting at an intersection, I had cars actually turn past and run over my tiny green bike without seeming to notice.

Other bikers definitely did notice the projection. I got lots of strange looks and questions. The green glowing bike, which blinks and skips around on the road, is also a bit hypnotizing while riding on a dark night.

The company designed the laser to alert drivers of your presence. Coming up along the side of a truck, for example, the laser shines ahead, ostensibly warning of your arrival from a blind spot.

Beyond the laser, the light worked great, as stated with up to 300 lumens of brightness at its max. This is enough for most urban environments.

I love the solid build, and the handlebar mount is among the best I’ve seen. It is waterproof, and the light recharges via USB and holds its power for hours of use.

Anything that can make you more visible on the road, in my opinion, is a good thing. But at nearly $200, and with mediocre laser effectiveness, the first-generation Laserlight could use an upgrade.

–See more about this product at Blaze.cc.