Home » Biking » ‘No BS Bike’ Launching As Quiver Of One

Coastline Cycle Co., a new brand led by an industry veteran, is launching a do-all bike they say breaks the mold of marketing-led design. “The One” is a bike that simply rides and works well without compromise.

Twitter founder Jack Dorsey famously said, “make every detail perfect and limit the number of details to perfect.” To this end, 20-year bicycle industry veteran Chad Battistone is launching Coastline Cycle Co. with only one bicycle, aptly named the “One.”

The One is a belt drive, dropper post bike conceived 10 years ago, which has evolved as new technologies have become available. It is designed for dependability and versatility, capped with high-end parts that will work well on urban commutes, trail rides, and many places in between. Some say it looks like a commuter bike, some a mountain bike. But the notion that this bike should be “used in a certain way or you’re doing it wrong” is something against which the founders of Coastline rally.

Coastline One: Bike Designed For Versatility

While efficient and comfortable transportation is at the heart of the Coastline bike, we have ridden it and can report that it is a bombproof marauder of street, dirt, and rock.

“It’s a bicycle!” Battistone exclaimed. “We don’t want to tell anyone what to do with our bicycles; We want them to tell us what they are doing with them.” It’s not a value-play. It’s not a high-end race bike. It’s just good, solid design.

The bike has a number of standout features that make it durable and reduce required maintenance, but the big one is the Gates Carbon Belt Drive wrapped around an internally geared rear hub. 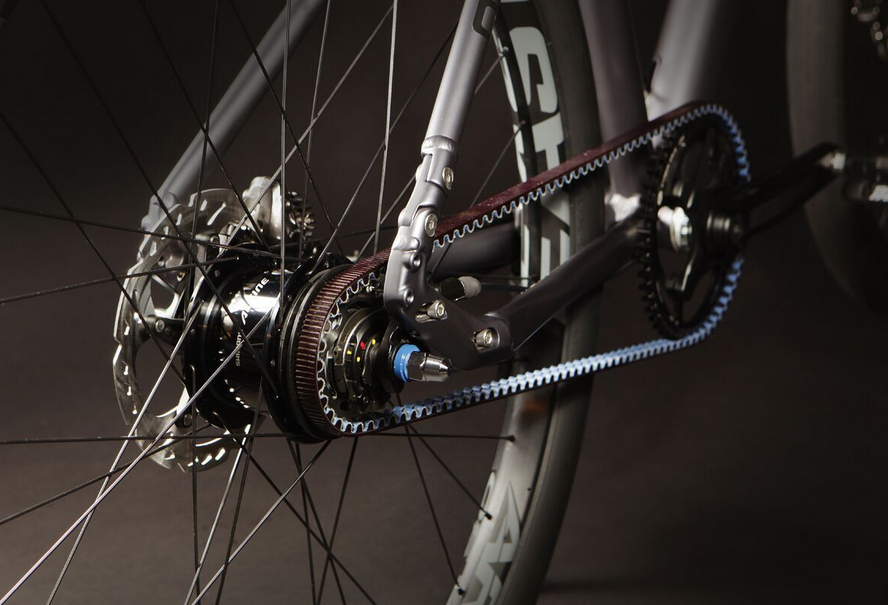 Shimano and Race Face parts, a threaded bottom bracket, disc brakes, and a high qualiity aluminum frame create a strong, arguably overbuilt, crusher of all that which rolls beneath it.

Coastline ‘The One’ Bike Review

My test ride found the bike to be quiet, solid, and lots of fun. The dropper post was great on the trail, and even just when hanging out talking, or waiting at a stop light. The frame was beautiful, with nice smooth and strong welds and a lot of attention to detail.

The brakes — which range from baseline Shimano hydraulics to Shimano XT depending on the model — performed flawlessly.

Even the MRP fork impressed. Founders Chad and Brady are both good riders and meticulous perfectionists, and it shows in the selection of parts for the bike.

It’s not a featherweight. We weighed the bike with tubes and pedals at 27.8 pounds, about five pounds heavier than a carbon race MTB without a dropper post.

Jack-of-all-trades. As with any bike that aims to do many things well, it does not do one particular thing perfectly. With the 100mm of quality suspension up front and the stiff and predictable frame and wheels, (all iterations of the bike have 32 spokes) the bike is solid on the trail. The long rear triangle takes the sting out of jarring hits. The slack front end keeps handling predictable and arguably slow, which lends itself to comfortable commuting. You won’t keep up with your buddies on their road bikes, and you’ll probably want to switch out the slicks for knobby tires to ride much off road. But the beauty is that you’ll be able to ride both road and trail at a modest rate on a single bike, something many will love.

One downside to the internal hub: We’d prefer the ability to dump multiple gears when approaching a steep hill, but the rear hub is one click for one gear. Otherwise, the Shimano geared hub system is a proven system that is durable and works well.

We foresee the One ridden by non-spandex-wearing, savvy bike lovers who want a bike that can both rip around city streets and modest trails. Riders of this bike will realize that although it was not built to hit any particular price-point, you get more for your money buying from a company like Coastline that sells direct to consumer, especially when using the Kickstarter promotion.

That said, you won’t have the support of a bike shop, so plan to break out the wrenches for regular maintenance or pay to have a shop do the work.

Coastline is launching as a direct to consumer brand, a business model that can save consumers money, but is often criticized for its role in undermining the viability of local bike shops. With a planned launch on Kickstarter beginning March 1, prices range from around $1,000 for a rigid belt drive single speed to $2,400 for an 8-speed internally geared bicycle equipped with an MRP suspension fork.

But a beautiful bike that cuts through all of the BS is needed for the rider who wants a bit of everything in a single bike. It’s executed very well here, and we predict there will be happy Coastline Cycle riders on both coasts, and everywhere in between.

Up Next: Understated Cycling Kit: Kitsbow Hits The Road