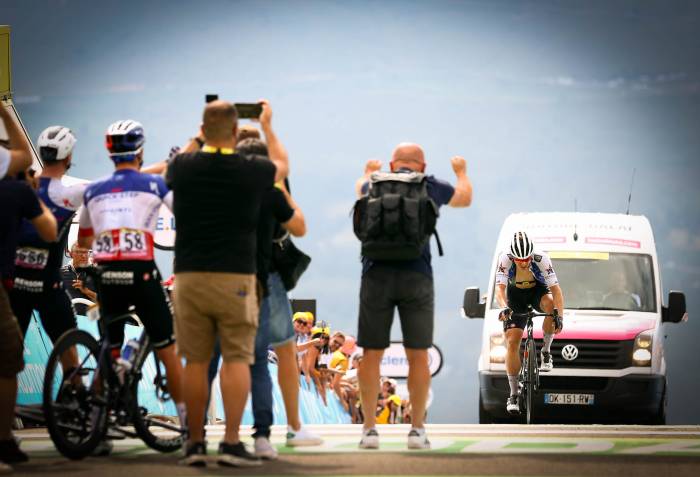 Team Quick-Step Alpha Vinyl team sprinter Fabio Jakobsen almost lost his life 2 years ago in the Tour of Poland. This year at Le Tour, he survived an altogether different challenge.

Jakobsen was sprinting for the win on a very high-speed downhill finish in 2020 when another rider forced him into the right-side barriers. The former Dutch National Champion burst through the metal fencing at 50+ mph. He then collided with a race official, breaking the bystander’s ribs but potentially saving his own life.

The video shows the explosive impact and is harrowing to watch, especially for anyone who’s crashed in a road sprint.

A “Wolfpack” teammate, Florian Sénéchal, was one of the first to attend to the fallen sprinter, lifting his head to clear his airway of the accumulating blood. On-scene TV coverage showed Sénéchal crying, fearing the worst for his friend. Another team’s doctor coordinated trauma care until a helicopter arrived.

Jakobsen had incurred significant brain trauma, and doctors placed him in an induced coma at the local ICU to spare his brain further contusion-induced damage. The horrific crash also produced hairline fractures to his skull, damage to the nerves servicing his vocal cords, a broken palate, loss of parts of his upper and lower jaw, a fractured thumb, bruised shoulder, and significant cuts to the face. Jakobsen would lose 10 teeth.

In late 2020, Jakobsen told the Dutch newspaper AD he felt like he was dying in the hospital bed, struggling to breathe, fearful of choking on the trachea tube.

“I kept losing consciousness, slipping in and out. Every time I thought, ‘this is it, now I am going to die.’ This happened 50 maybe, 100 times. I didn’t die, but it felt like that. These were the longest days of my life. I’d rather ride three Vueltas a España (the tour of Spain) in a row than spending one more day in the ICU.”

Jakobsen underwent multiple surgeries to repair the massive damage to his face, which included bone transplants to his jaw.

The most pressing injury was the damage to the nerves innervating his vocal cords. Jakobsen would require a complete recovery in this area to breathe with enough efficiency to return to professional cycling.

One positive thing about Jakobsen’s brain injuries is that he cannot remember the crash. In the 2020 AD interview, he stated, “My luck is that I don’t remember the crash. I have no nightmares about [it], and I am not afraid of crashing [because of it]. I will only know whether I won’t be afraid to sprint again when I am back in that bunch. I know that if I want to come back, I can’t sprint with fear. A scared rider hits the brakes.”

Having worked in motorsports for over a decade, I have heard similar from athletes suffering concussions while motorcycle racing. It’s the only positive I can take from this kind of trauma.

Jakobsen recovered to return to the pro peloton, and this year marks his first participation in the Tour de France. Remarkably, he won stage 2 in Denmark, narrowly besting Wout van Aert (Jumbo-Visma) and Mads Pederson (Trek-Segafredo).

If riding in the fast, roiling pack scared him, he didn’t show it.

Instead, Jakobsen showed his physical recovery from his accident and his mental return to the high-stakes game of professional road sprinting. The emphatic win would cap any athlete’s return to sport, but Jakobsen and the Wolfpack would deliver more feel-good results 2 weeks later when the Tour de France hit the Pyrenees.

Jakobsen is a pure sprinter, lightning fast at the end of flat stages but possessing the polar opposite physical attributes of most climbing specialists. Climbers tend to be the lightest team members, hired on to hide in the pack until the roads head skyward.

In a climb, sprinters often relegate themselves to the back of the group with the goal of making the stage’s time cut. Missing this cut results in omission from the remainder of the race.

Remember, this time cut is based on the winning time of the best climbers in the world. Jakobsen floundered at the back on climbs with other sprinters preceding this week’s foray into the Pyrenees.

He made each day’s time cut with the help of his team. But the Pyrenees climbs would be a much steeper task.

Riders and teams feared this day — 81 miles from Saint-Gaudens to Peyragudes, ascending three intermediate climbs before attacking the final 5-mile climb at a 7.8% grade, with the last 500 m at an utterly savage 13%.

Jakobsen would have to survive the time cut to continue to contest one of the tour’s most coveted prizes — the final sprint on the Champs-Élysées on Sunday. Jakobsen is undoubtedly a contender.

Stage 17 proved brutal for everyone, particularly for the sprinters. Jakobsen found himself alone on the final climb at the very back of the race. Team bosses ordered his teammates to leave him so they wouldn’t miss the time cut.

Race footage shows a lone figure, obviously struggling to turn the pedals. The infamous “broom wagon,” which “sweeps” riders who abandon the course, looms behind him. A Quick-Step Alpha Vinyl team car creeps on his heels, team directors willing the sprinter to wring every ounce of energy from his body to beat the ticking countdown clock at the finish line.

His progress is painfully slow. Fans cheer at the top of their lungs, sending all their energy to the underdog. TV announcers state that he sadly won’t make it despite his heroic effort on display — despite how far he’d come already.

But the Wolfpack was waiting for him. The same team at the crash, the same person that held his head while he lay on the ground at the Tour of Poland, struggling to breathe.

Jakobsen made the time cut by the narrowest of margins: 15 seconds.

#TDF2022, Stage 17. Fabio Jakobsen kept himself within time limit by 15 seconds. He did a sprint on runway to stage finish. (link to video via @RenaudB31) pic.twitter.com/NOl8HJGUXK

Watch and listen to the play-by-play. It didn’t look like Jakobsen would make it. Although his effort was evident, his forward progress seemed eternally slow. But what the announcers could not see or call was heart.

The crash. The painful therapy. Overcoming doubt and fear. And the power of the team. The Wolfpack ushered Jakobsen over the other climbs; they led him out on his winning sprint. Now it was his turn. And he delivered.

Why We Love Sports

Stage 17 ended with a sprint between Tadej Pogačar (UAE Team Emirates) and Jonas Vingegaard (Jumbo-Visma), with Pogačar surging to win by a slim margin. It’s a compelling story on its own: the two top dogs mano a mano at the finish of one of the most challenging days in this year’s Tour de France. An easy headline.

But I’ll argue that the stories at the very back of the Tour de France are often better. And not just in that moment or on that day. Lurking below the surface and beyond the results are storylines that can cast humans in a light that I find rare these days.

And they can remind us that we can be noble and sacrifice for others for the good of a team — and make those efforts for reasons other than results.

This is the post-race interview with a tearful Sénéchal, the Wolfpack member at Jakobsen’s side after the fearful 2020 crash.

“Chapeau, he is my friend.” No further commentary is required.

Jakobsen must make the time cut today to continue his fantastic story and contest the final Tour de France sprint in Paris. I don’t know if he will do it. But I do know he’s a winner, along with his Wolfpack. Long live sport. 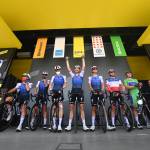 Riders who claim the yellow, green, polka dot, and white jerseys in the Tour de France may get all the glory, but the race is a team sport. Read more…