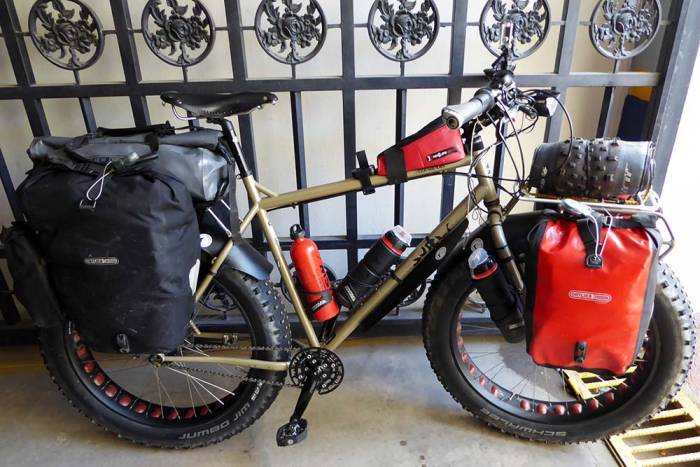 You wouldn’t take a dump truck on a cross-country expedition, so why pedal over a thousand miles on the bicycle equivalent?

According to Bernard Wragge-Morley, a 62-year-old business owner from the U.K., because it’s stable, easy to handle, and he and his travel companion/wife aren’t in any hurry.

“We never race anywhere, typically cycling 60 to 90 km a day, stopping often and enjoying places and the people we meet.” 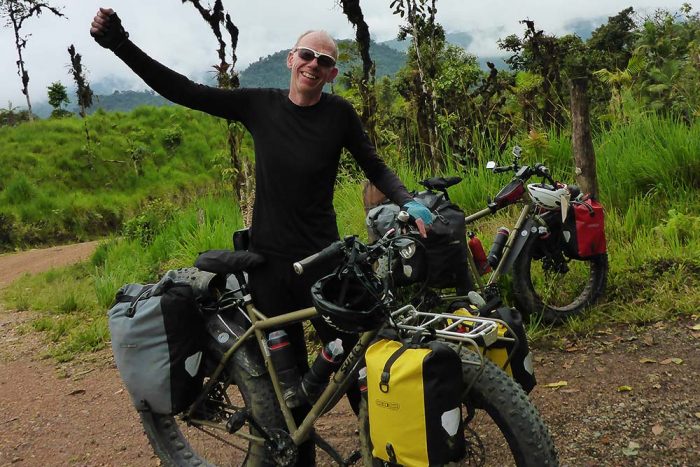 Wragge-Morley and his wife, Sarah, just completed a bike tour through Colombia and Ecuador on fat bikes. In all, they went 1,200 miles through the Andes, cloud forests, and “The Lost City.” It was their most recent long-distance, self-supported tour, and the pair’s first on 5-inch treads.

We caught up with Bernard on his way back home, via Australia, to learn a little more about the unusual setup and what did or did not work.

The Wragge-Morleys didn’t jump into fat-bike touring. The pair logged over 35,000 km (almost 28,000 miles) on mountain-bikes previously. But they developed a taste for fatties during a Great Divide tour through the States.

Wragge-Morley found Surly was the easiest fat-bike frame to obtain in the U.K., so he nabbed a couple Moonlanders and set to work on making them long-haul truckers (figuratively speaking).

He built up everything: headset, wheels, and drivetrain. The whole build was made for touring.

“I went the whole hog with 120 mm tires, front and rear racks, Rohloff gearbox and Schmitt Son 28 Dynohub, and Busch & Müller Lumotec U sense light,” he wrote on his blog.

He made a couple of special modifications, one to the torsion bar to permit rear-wheel adjustment, and another to the front rack. Beyond that, Wragge-Morley assembled the bike with his chosen components (see below) and set off.

Wragge-Morley gave us a rundown and review of his full setup. Below are his thoughts on riding almost 2,000 miles on a 44-lb. Moonlander loaded with more than 57 pounds of gear.

We had to get used to the different handling of the Fat Bikes. With front panniers, they had to be proactively steered at low speed, but having some weight at the front makes them much easier to handle on steep climbs as the front wheel stays firmly on the ground.

In every way, they are a very stable ride. When we take all the luggage off for a quick local explore they suddenly seem very responsive. I am really pleased that I built these and brought them with us. It was very much a step into the unknown.

Most of the distance we rode was on tarmac and we didn’t find the fat bikes a significant disadvantage. There is more rolling resistance with the Schwalbe Jumbo Jim tires than the Marathon, which are designed for touring, but that is mostly down to tread pattern, not size. I could not find a touring-specific tire 120 mm wide. 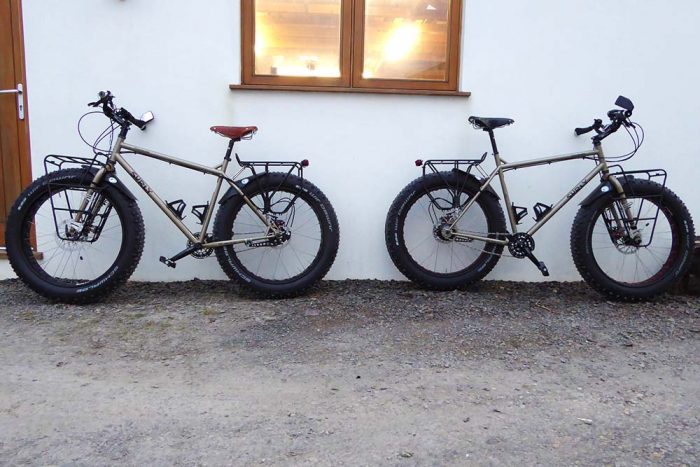 So far they have performed very well. They were in their element on section from Charala to Duitama. The first 17 km was all uphill. The road surface was loose stone of irregular shape, mostly 75 mm or larger, with base rock, ridges, and steps often 100 mm or more.

The fat tires rolled over it all. It was a hard ride even on the fat bikes but we were able to ride it all. They also dealt well with the soft muddy sections which surprised me. The sandy mud cleared out of the tires really well and as we were moving slowly we did not get any aquaplaning.

We had five punctures on the first part of our journey on the road from Cartagena via Santa Marta to Bucaramanga. One from a thorn and the rest from broken wire of truck tires. As soon as we left the main road for the tracks the punctures have stopped. One of the brand new tubes I fitted in Cartagena had a manufacturing fault next to the valve and blew the first day.

These performed without fault.

This, of course, performs the same as they have since 1886: brilliantly.

This is the first time we used these on a touring bike. They performed really well under all weather conditions. We only performed minor adjustments to compensate for wear about once every two weeks. Despite the heavy loads and steep, very long descents, often in wet weather, the first set of pads were only half worn after 1,500 km. Stopping power remains constant under all conditions.

I swapped over to the VDO M3 odometer as I found the Cateye M8s I used only lasted about one year before corrosion stopped them from working. Also, the cage on the Cateye holds water and can stop working in heavy rain. The VDO is much better designed and works well.

These unfortunately are a disaster! They cannot cope with a small amount of moisture. I chose them because they have good focused light output and a built-in USB charger. I fitted these before our trip to ride the Great Divide. One of the lights failed in heavy rain. 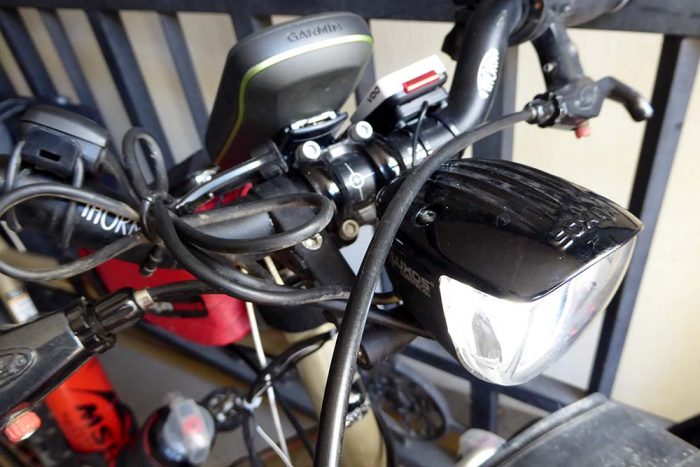 I fitted them to the fat bikes and one light was faulty on delivery, again replaced. Then both the new ones failed in the rain on our Scottish Isles trip. Again both were replaced free of charge. On the third day of this trip we had a tiny shower and the light on my bike failed again! They need to change the design of the remote switch.

This is the first time we used front bags. To begin with, even on the road, we had terrible trouble with the front bag bottom clips coming out from the rack and the bags bouncing. After our experiences in Romania, we always add a velcro strap around the top bar and a second bottom clip to the rear bags to keep the bags from bouncing off over speed bumps and level crossings. 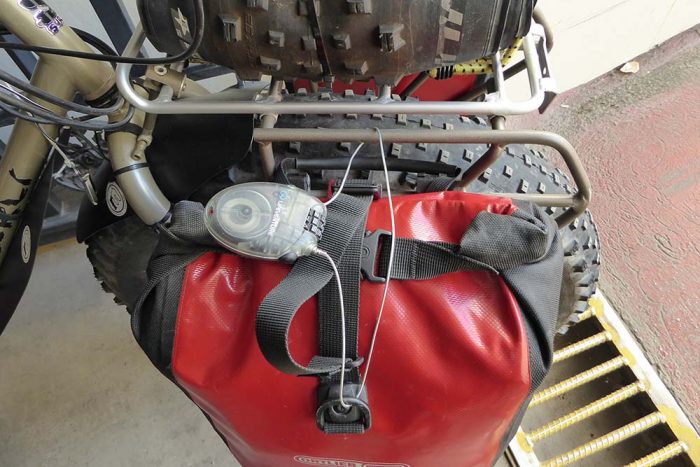 To fix the front bag problem, I bought more velcro and sewed some straps to tie the bottom of the front bags in. This solved the problem. I don’t understand why, but the bags with the least weight in them were the first to bounce out. We only have 2.5 to 3.5 kg in the front bags. It is quite noticeable in 40-degree Celsius heat, the plastic on the bags becomes quite pliable. With all the velcro and locks, it is a pain getting the bags on and off the bikes. but at least they stay on while we ride.

Also, I used the extra small bags added to my rear panniers to carry tools and locks so they are easily accessible. On this trip, they come off regularly so I had to take them off and put them in my food bag on the rear rack. I have not had any problems with the small bags on the previous 30,000 km.

This is a fabulous piece of kit and I wouldn’t leave home without it. I keep it in my top bag where it is out of sight and works perfectly. Garmin just bought Delorme. I hope the technology only flows from inReach to Garmin and not the other way round. 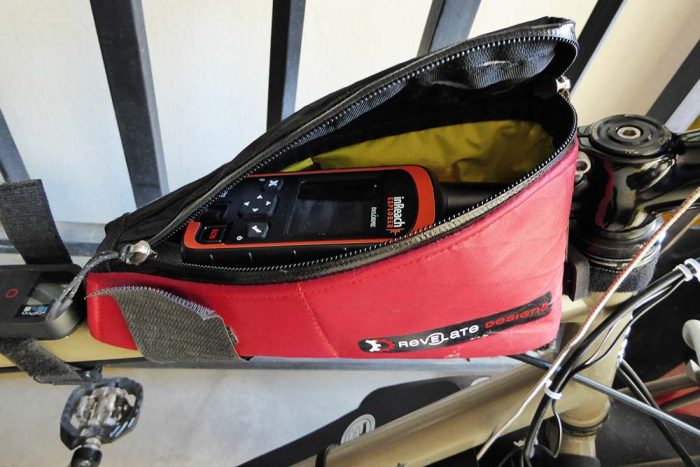 We don’t want the Inreach to output some arbitrary position instead of the last accurately known one.

I think (hope) that I have a Friday-built 600t and the performance of mine does not reflect the typical performance. I replaced my 450t last year as the screen was failing after many years of good service. So I thought I was upgrading going to the 600t. It has a much better screen and similar battery life.

However, the two most import parts — the GPS receiver and the tracking software — are very poor. On the average 60-km journey it loses all satellites at least three times. This is either due to poor antenna or receiver. It is possible they compromised the design to incorporate the dual satellite systems.

The 600t also regularly takes more than one attempt to boot, the other day it took 10! I gave up a few days ago and now use the 450t.

When the GPS receiver on the 600t loses lock, the tracking software continues to log all the points. This adds lots of useless km to the track.

The GPS in my Samsung phone works better, but unfortunately, they are not sufficiently waterproof. The 450t performs much better as a GPS and never let us down. The software is better written as well. The only reason to keep using the 600t is the better screen. Garmin said they will exchange or replace the 600t.

This is an excellent piece of kit. Five USB outputs, three high power. It Works off any voltage: 100 V to 240 V 50 or 60 Hz. I bought this on Amazon but I can only find a four and six port version now.

This charges up to four AA or AAA batteries from a USB port. This latest version is excellent.  Each battery is individually charged and monitored. I have modified these to cover the discharge button so that I can store the spare batteries inside while transporting them without having to worry about an accidental discharge. The black one is better than the earlier red one.

We have used these to lock our panniers to the bikes. While they will not withstand a serious attack it prevents a snatch and shows we have some security. After all, any knife will open a pannier in seconds. One of the eight locks broke after nine weeks and two of them no longer retract.

Up Next: Pedals Over Pills: Studying Cycling And ADHD In Schools