When complete, Garda By Bike will wrap 87 miles around Lake Garda, allowing riders to “fly” above the water’s surface. 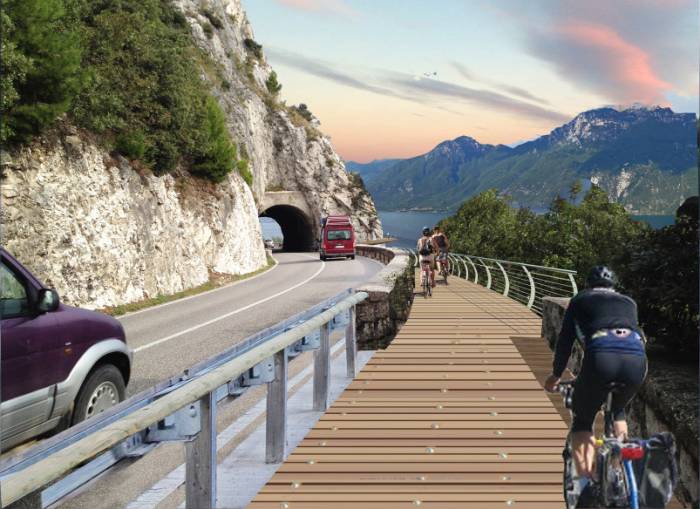 Beginning this summer, you can ride on one of the most ambitious bike paths ever created. Located in northern Italy, the nearly 400,000-square-mile Lake Garda already attracts plenty of tourists. But public works design firm ATT of Salò is in the process of adding some stunning bike infrastructure. The 140-km path will jut out of the cliffside and “float” above the water.

Though the project won’t be completed until 2021, nearly half of the construction is complete. And after Garda Outdoors released sweeping drone views of the progress, CNN Travel reported that the first 3-mile section will open to the public this summer.

According to the Garda Post, the massive bikeway will cost more than $122 million to complete. When finished, it will connect three Italian provinces: Trentino in the north, Verona in the southeast, and Brescia in the southwest. 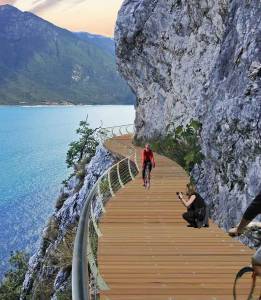 The 3-mile section to open for public use this year stretches from Brescia’s Limone sul Garda to the southern border of Trentino.

Chicco Risatti, mayor of Limone sul Garda, has high hopes for this summer’s opening. He publicly proclaimed the bikeway “will be the most spectacular cycle path in Europe.”

The cycleway aims to cater to cyclists at all levels. But according to Cycling Weekly, “some sections will be trickier than others with alternative transport available on some of the hillier parts, including the option of traveling by boat.”