Years in the making, a startup company sees its ‘wearable motion measurement tool’ as the next big thing for biking (and beyond). 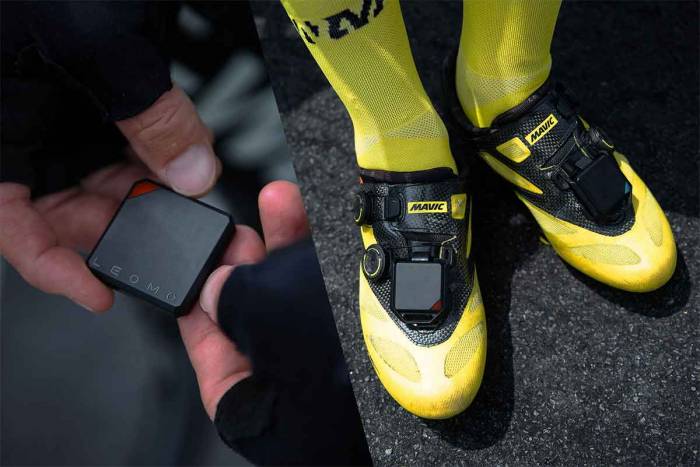 A drone hovers, filming the action. Cyclists race past, rocketing around a giant track. It’s a Thursday night in Los Angeles, and I’ve been invited to witness a product purported to be substantial for the future of the sport.

The venue is the VELO Sports Center and its 250-meter indoor wood racing track. The company is LEOMO, Inc., an upstart selling what it calls the “next frontier of wearable technology.”

LEOMO believes the next step is something called motion analysis. At a high-level, this term refers to the assessment of body movements to build and display data for improving efficiency during sport.

The company’s debut device, called the TYPE-R, is a multipart package with a handlebar-mounted touchscreen and five small sensors. Gyroscopes and accelerometers measure a wearer’s motion and form, giving real-time feedback on foot position, leg angle, pedaling “dead spots,” and pelvic tilt on a bike seat.

After a demonstration, I configured the kit to go for a ride. LEOMO contracted Foxconn, the huge Chinese manufacturer that makes iPhones, to produce the TYPE-R product. As such, each piece is refined, including a beautiful color touchscreen and square sensors you arrange on your body.

Like little tiles with LEDs in the corners, the sensors affix on your shoes, each knee, and on the lower back. Medical-grade adhesive patches make them stick to skin. It takes only a minute to arrange these pieces, and you don’t notice them while riding.

Bluetooth syncs the sensors wirelessly to the handlebar-mounted main unit. Begin riding and the TYPE-R is immediately gaging every pedal stroke, ankle bend, and body position on the bike.

Readouts roll across the display in realtime. Multiple fields and swipeable screens provide data in percentages and degrees. Ostensibly, a rider can gauge performance with a glance at the handlebar-mounted unit, adjusting for efficiency as she or he rides.

The totality of metrics is saved. You download it later, spotting issues in form, discerning trends in your motion, good and bad.

I rode a few laps on the velodrome before getting assessed. “Pedal one lap then go into the drops,” a coach shouted, instructing for a drill. 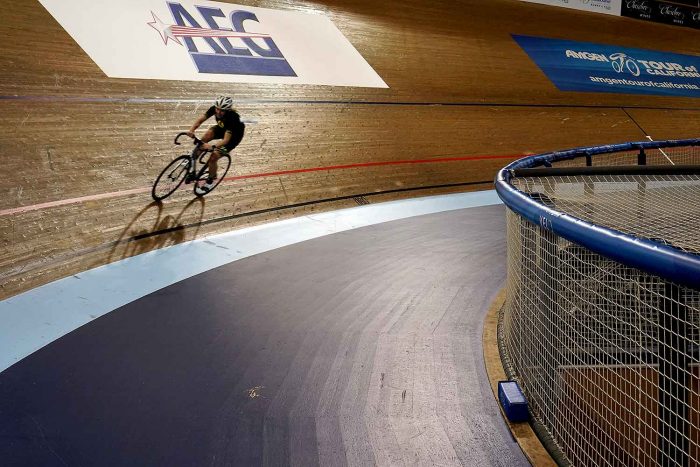 The indoor wooden track, which is the largest of its type in the country, splayed like a varnished floor, tilting and then cutting sharp to the left as a banked swoop. I rode fast on a fixed-gear bike, no shifting and no brakes.

My bike tires gripped on the wood, centrifugal force keeping my angled frame upright and accelerating. The LEOMO gauges did their thing, soaking in X-, Y-, and Z-axis information and pushing it to my screen.

Before pedaling off, a coach had encouraged I monitor pelvic tilt while riding. I tried to glance at the screen between banking turns. The numbers flashed, but it was difficult to comprehend.

Motion: A ‘New Frontier’ For Cyclists?

LEOMO plans to sell its first units to coaches who work with elite and professional riders. The TYPE-R will cost $399 for this crowd, and then its price will increase as the company opens for anyone to purchase.

Early adopters will be tasked to decipher motion data somewhat on their own. This is a new field. Unlike heart rate, watts, and other physical metrics, there is scant research or consensus on optimal pelvic tilt, “leg angular range,” and other data points the LEOMO units offer. 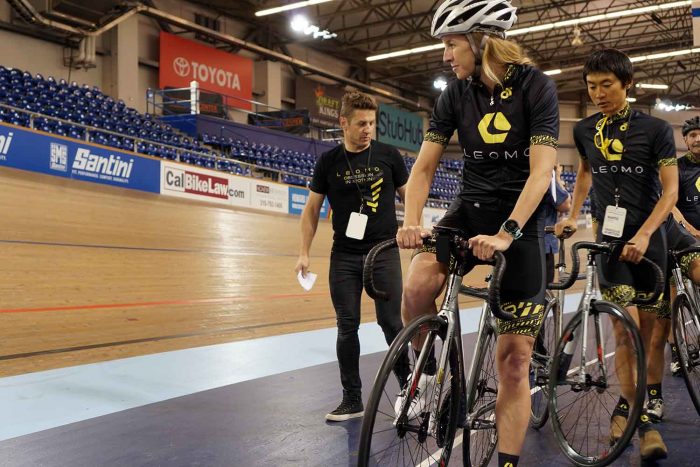 The company is working to demystify the output. Indeed, the product announcement coincided with an ancillary launch of something called the Institute of Motion Analysis.

A research body, the Institute of Motion Analysis will be comprised of “some of the world’s leading sports scientists, exercise physiologists, coaches, physical therapists, and biomechanics experts.” Their task will be to recognize the role that motion analysis can play as a tool for measuring physical performance (and then build a system to make it universal to read and apply).

LEOMO is making a big bet on motion. It’s well-funded and has hired top cycling coaches and has a multitude of coders and engineers on staff. Based in San Diego, and with roots in Japan, the company employs 28 people on a mission to make motion analysis the next big thing.

Beyond biking, LEOMO cites swimming, running, and even team sports like football as candidates for motion measuring. Refining technique for efficiency, speed, or safety could be a standard practice in years to come.

But for now LEOMO is focused on the bike world. The TYPE-R is touted to reveal a litany of difficult-to-discern metrics, flaws, and inefficiencies. These include “dead spot scores” in a pedal stroke, heel movement while pedaling, seat position, thigh movement, and more.

After my laps on the track a coach gave me the top-level breakdown. He flipped through screens of data, charts and lines distilled to represent my motion on the machine. 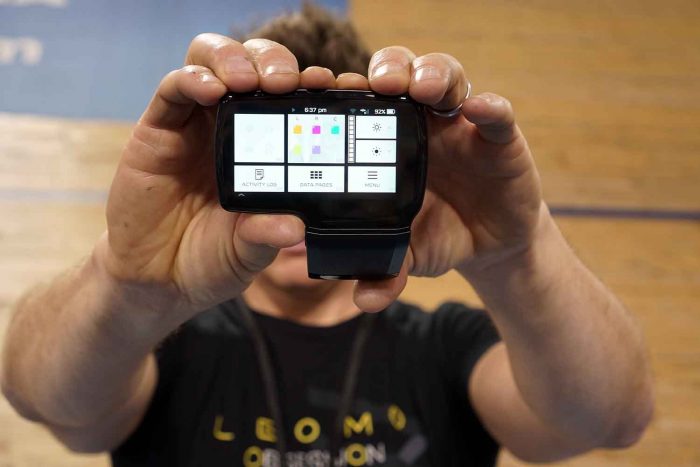 The coach paused while reading the data. He pointed to a pelvic-angle metric, noting my stats were similar no matter if I gripped the top of the handlebars or went into the drops.

It was a quick and ad hoc takeaway. But the data point illustrated a weakness in my style — no matter where my hands were on the bars my spine position remained the same. This forced me backward on the seat, an unwitting move of millimeters that compromised muscle efficiency.

LEOMO TYPE-R: What Is The Market?

LEOMO has an aggressive vision with its debut device. Beyond the motion measuring, the unit has GPS tracking and is ANT+ compatible, making it usable with power meters and heart-rate straps. “The head unit alone will give many high-end bike computers a run for their money,” LEOMO brags.

It is an admirable piece of hardware. And LEOMO has invested in coding more than most startups in the space. Co-founder Kunihiko Kaji explained to me the intricacies of eliminating “noise” for its gauges to work. He said his team spent “months and months” making the algorithms that power the product.

Will motion measurement see adoption in the cycling world? If it can take off anywhere, road bikers are a good place to start. Accustomed to spending money on bikes and ancillary gear, the demographic may glob toward a new tool for improving fitness and technique. 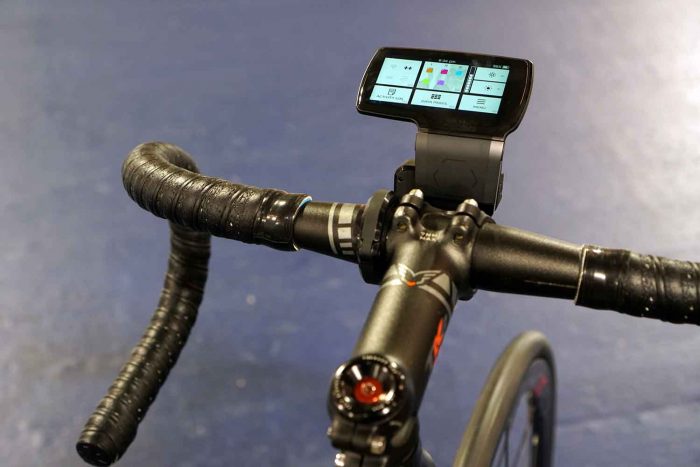 Much like power meters a decade ago, motion devices are a burgeoning area. It took a few years, but now power meters are ubiquitous with serious cyclists; LEOMO insists its trajectory will map the same.

Elite athletes will likely take to something like LEOMO. In a realm where seconds matter, any advantage can be huge.

Anyone suffering from an injury could be a candidate. And bike-fitters likely will perk up when learning about a device that quantifies physical/mechanical relationships.

We’ll be watching LEOMO as it launches to the public this summer and seeks customers and supporters of its vision for “wearable motion measurement tools.”

Up Next: Could A Drone Be The Future Of Pollination?

Saving…
Could A Drone Be The Future Of Pollination?
Crash-Proof: ‘Indestructible’ Drone Springs Back To Shape
×