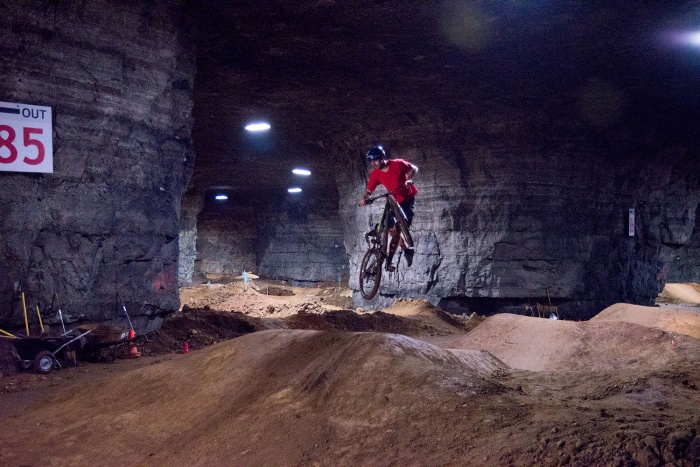 Editor’s note: This article was originally published in 2015; it’s updated here after a subsequent trip to Louisville, KY., as a part of our ‘Great Urban Outdoors’ project with YETI.

As I pedal into the darkness, motion activated lights flash on. Around me, six-foot jumps, rocky turns, and steep cavern walls become illuminated. It’s a mountain bike playground, and I have it nearly all to myself. Where to start?

We traveled there to showcase the unique urban opportunity it offers in the burgeoning Louisville MTB scene. What first started as a limestone mine, the Mega Cavern founders turned it into a tourist attraction complete with excellent mountain biking.

On location for a YETI video shoot, we also learned all the ways Louisville is growing to accommodate bikers. Dedicated commuter paths, a 100-mile loop, and a newly-opened skills park are a few of the recent developments.

Together, with the Mega Cavern, Louisville positions itself as an urban mountain biking destination.

We first rode the Mega Cavern on a Thursday afternoon, and it was nearly empty. A couple out-of town BMX riders spun laps. Trail builders crafted new jumps in a distant section of the cave.

More of a single-track rider myself, I took to the flow style berms trails with tame jumps. My first couple of run throughs were clunky. I stopped occasionally, missed turns, and didn’t ride efficiently.

But I kept riding, and as I learned which turns to take and what lines to follow, my thrill blossomed. I suddenly envisioned myself spending a lot of time down here.

I darted into pump tracks, hit steep berms, attempted whipping my back tire out, and popped up to a line of jumps. The runs are long and tiring, but rewarding.

It’s definitely a skills-focused course, and it’s just my style. It emphasizes the fun parts of mountain biking.

After nearly 15 minutes of riding, I had hit more jumps and berms than I would in an hour of riding the singletrack near my home in Minneapolis.

A near-infinite amount of trail combinations gives riders plenty of variety in the cave. After I got the hang of the style, I wanted to stay in the cave all day.

The literally hidden gem progressively gets more and more fun the longer you ride it.

Cave Features: What To Expect 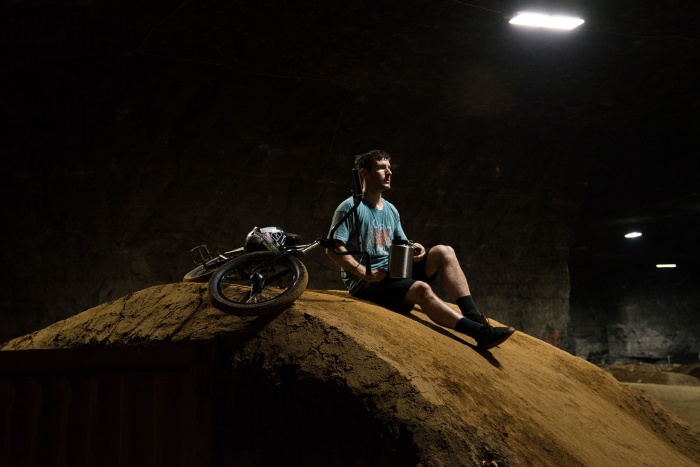 While the cave suits mountain and cross bikes well, it really shines for dirt jumping and BMX. It’s rare to find well-made dirt jumps and they are in abundance in the Mega Cavern.

Instead of the bouncy full-suspension I rode, next time I’d opt for a hardtail or totally-stiff bike without shocks. Energy transfer is the name of the game, and every bump or push of the shocks wasted precious forward momentum.

Rain, snow, or sleet, the Mega Cavern is open for business just a few miles south of downtown. But expect some damp spots when its particularily humid outside. 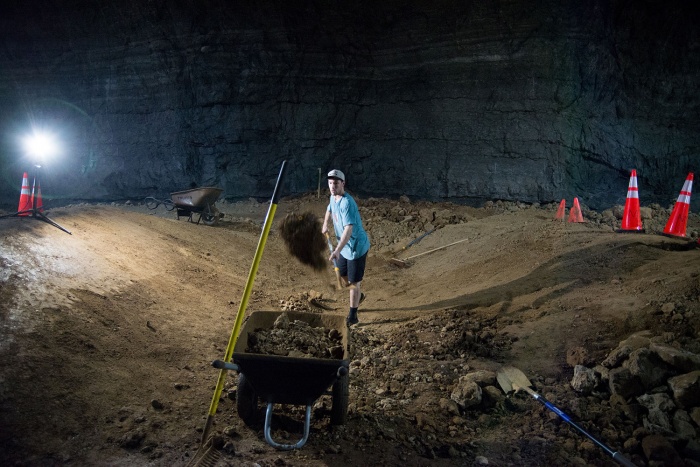 Outside of the cave, we spent a morning riding with Derek Fetko, shop co-founder of On Your Left Cycles. From his shop, we rode to Cherokee Park, 10 minutes away.

As the sun crested over the horizon, we were dropping into gorgeous single track. He chose a dramatic line, one that lead through mist and dew-laden fields before disappearing into the forest. It looked like the place where you would want to get lost.

He was quick to give a rundown on the latest developments of biking in Louisville.

He mentioned the Lousiville Loop, a 100-mile route, was nearing completion and would offer riders the century experience without leaving city limits.

For top notch singletrack, hit the Parklands. Situated on the outskirts, the rural-vibe park offers more than 47 miles of bike trail across a beautiful 4,000 acres.

Within the Parklands, there’s the recently finished Silo Center (opens September 17) that offers two pumptracks, flow style singletrack, and a massive wall ride. Be sure to ask the workers there how the trails got their names. (Hint: One involves lighting, a barn, and bacon.)

Needless to say, we left wishing we had more time to spend in Louisville. We saw just the tip of the iceberg, so much left to explore.

The city may not have mountains or steep canyon walls, but it’s not trying to. Louisville shines in taking advantage of what’s there. And in the case of the Mega Cavern, its a used limestone mine.

Head to Louisville and the Mega Cavern for a unique biking experience. And don’t forget to sample one of Kentucky’s greatest offerings: Bourbon!