Singer. Poet. Long distance cyclist. Conservationist. If ever there was a “renaissance man,” it is Ben Weaver, a musician who recently circumnavigated Lake Superior by bicycle with guitar and banjo in tow. 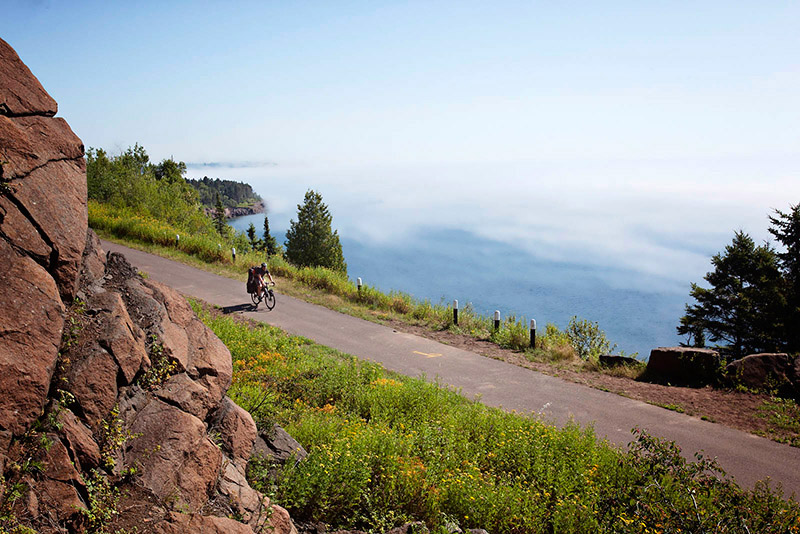 The ‘Surrounding Water’ record tour was not your average traveling-musician gig. This summer, Weaver geared up and biked around the world’s largest lake, instruments in tow, stopping to play at 12 venues in the United States and Canada.

Produced in partnership with the Great Lakes Commons, the tour had a goal to “engage audiences in a broad conversation about the state of freshwater” with songs, poetry, and local shows.

It was also one badass bike tour, covering 1,400 remote miles ridden over 16 days.

Weaver’s tour focused on the preservation of fresh water, illustrated at every turn by the world’s biggest freshwater lake as he rode through Minnesota, Ontario, the U.P of Michigan, and a stretch of Wisconsin to complete the giant loop. 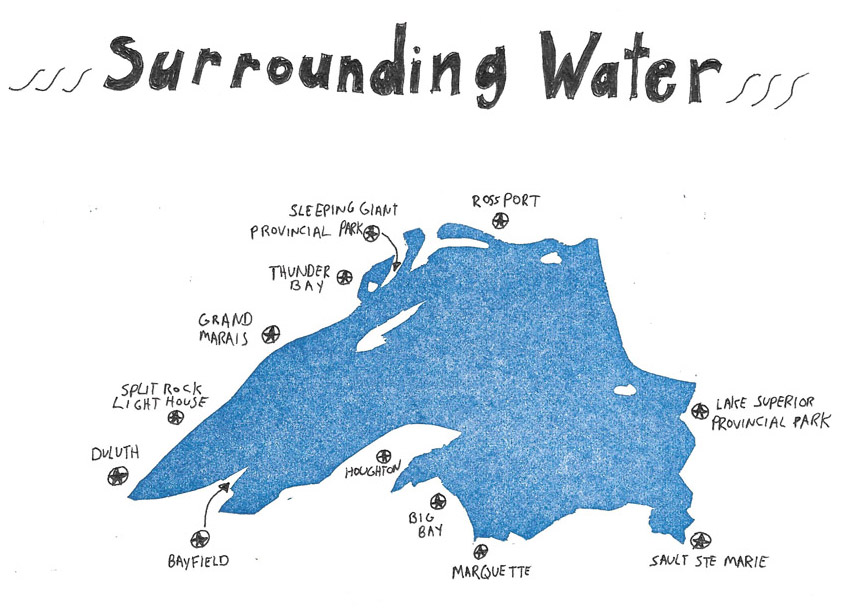 “The hardest part of planning a trip that combines riding and performing is estimating in advance how many miles could be ridden each day,” he said. “To still arrive on time and in shape to perform that night is a challenge.”

Besides the physical and mental challenges you cannot predict the weather, road conditions, elevation, or wind. There isn’t a lot of room for error.

“My route was decided in two ways at two separate times,” Weaver said. “First, at home when I had the idea for the trip; this part of the routing was largely dictated by what communities had organizations I could and wanted to partner with.”

The second part of the routing was stringing these communities together in ways that allowed him to see as much of the Lake Superior and the surrounding land as possible.

Weaver chose a Salsa Marrakesh with bags, racks, and mounts to haul copious equipment, including a guitar and a banjo. The bike was set with a triple-ring drivetrain with bar-end shifters, cowchipper handlebars, Schwalbe Marathon Plus 700x38C tires, and a very worn Brooks C17 saddle. 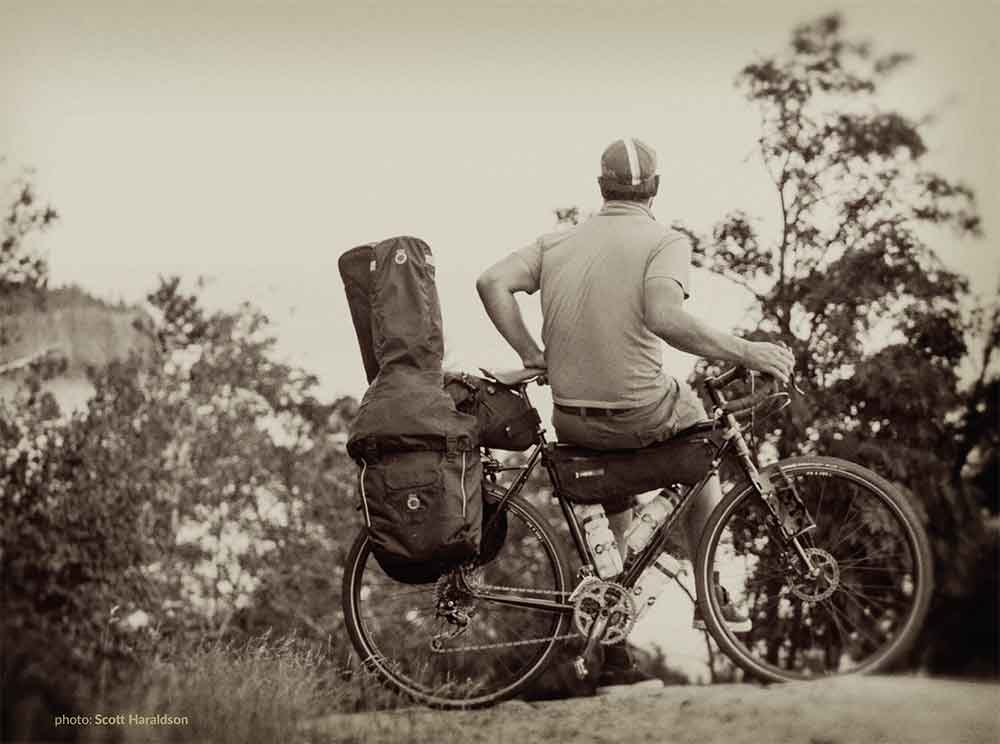 Bags included a custom banjo-carrying softside case from (who else) Banjo Brothers; the Revelate Tangle Frame Bag and Viscacha Seat Bag; and Salsa Anything Cages with Salsa dry bags.

“Pay attention to is how the weight is distributed on the bike, making sure that it is even side to side,” Weaver said. “This is a nice thing about the evolution of bikepacking bags, because you have even more options for how to carry things enabling the weight to get spread out over your bike. You are not just limited to front and rear panniers anymore.”

Weaver continued, “Put the important things on top, like raincoat, tools, first aid kit, maps. I have friends who make lists of what is in each bag so they can quickly find the items they need, when they need them. I never rode with a backpack before, but I used the Granite Gear Kahiltna this trip. It allowed me to carry 3 liters of water on my back, which was key for the 100 plus mile stretches I did in Canada.” 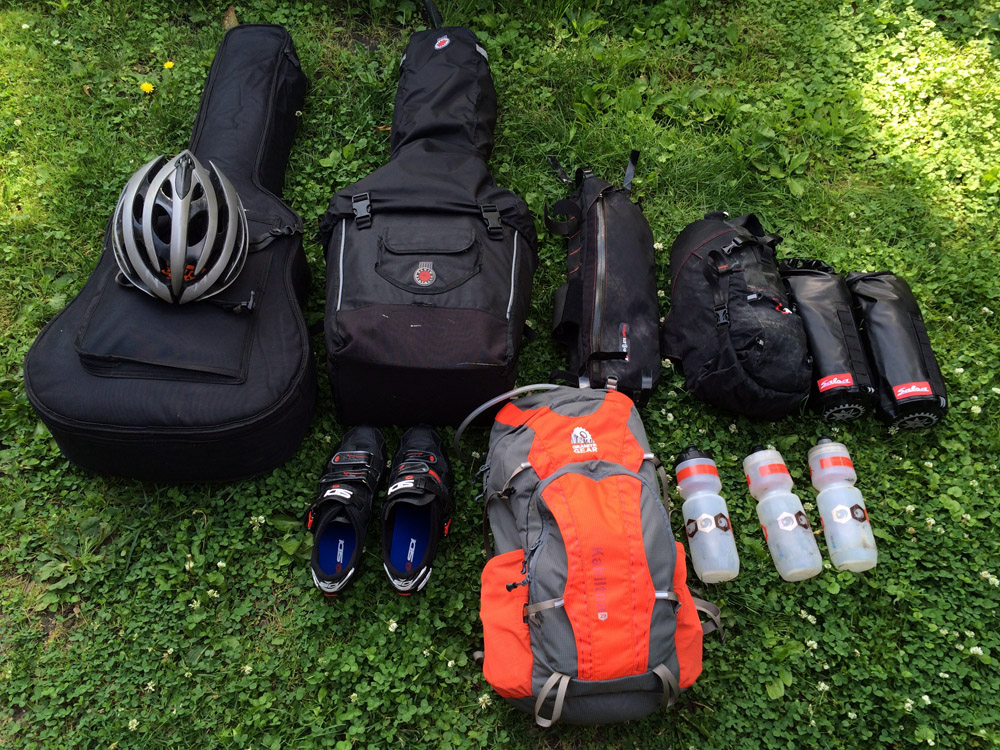 What Weaver usually carried in a handlebar bag, he moved to the pack and this freed up the cockpit of the bike.

“Folks often asked me what it was like to ride back to back 100+ mile days wearing a pack,” he said. “Honestly, it was so comfortable half the time I forgot it was there.”

Performing 13 shows in all, Weaver played a range of venues, with many shows unplugged and acoustic, taking place in outdoor spaces or quiet indoor rooms.

He prefers to cultivate reciprocity, engaging the audience with questions, or encouraging them to ask him questions while performing. “I would rather stand on the floor in front of my audience than on a stage above them,” he said.

Weaver partnered with multiple organizations to get the word out on his tour. The groups included: Great Lakes Commons; Friends of the Land Keweenaw; Save the Wild UP; MN Land Trust; MN Historical Society; Yellowdog Watershed Preserve; Sierra Club; and Canadian Provincial Parks.

Duluth to Bayfield, Wisconsin, on the morning of the first day, Weaver was met with an obstacle when he discovered, by chance, repairs to the Bong Bridge closed the bike lane which takes you from Minnesota to Wisconsin. Forced to turn around, the trip went from a modest ride of 75 miles to well over 100 miles.

Making his way around St. Louis Bay from Minnesota into Wisconsin, he went through a tiny town called Oliver. During his unexpected traverse though the St. Louis River estuary and surrounding wetlands, Weaver crossed an incredible train bridge where he said “the light was filtering through the steel framing in stunning geometric patterns of gold.” 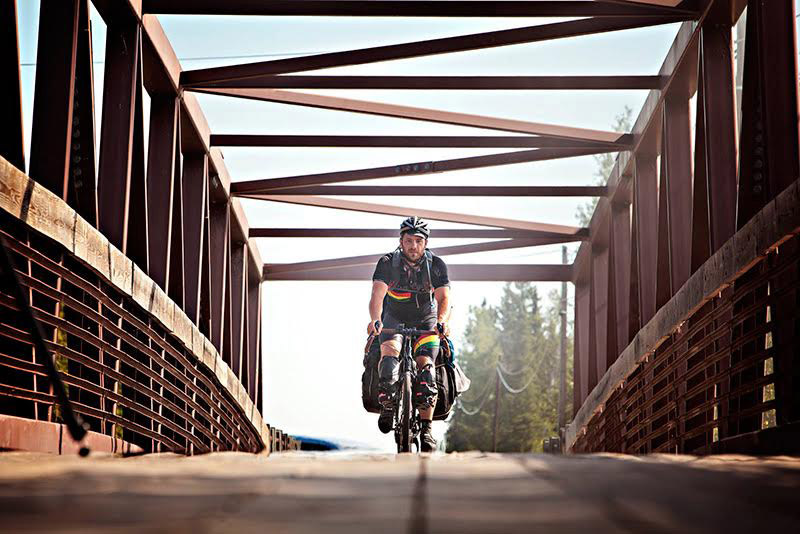 The key takeaway: many cyclists would be flummoxed by such a major change in itinerary, even if they weren’t hustling to perform a show that night, but Weaver is almost always more calm and maybe even welcoming of these unexpected diversions.

Why? He knows from experience that dealing with uncertainty and inconvenience are not bugs, but features of living an adventurous life. Instead of fighting these obstacles, embrace them for even more rewarding experiences.

Hardest Part Of The Trip?

“The hardest part of any trip always seems to be coming home. I talk about it every time. But ‘hard’ may not be the right word — there is an idea that when a route is finished, the trip is done, and coming home is the final stamp on the doneness of that specific journey.” 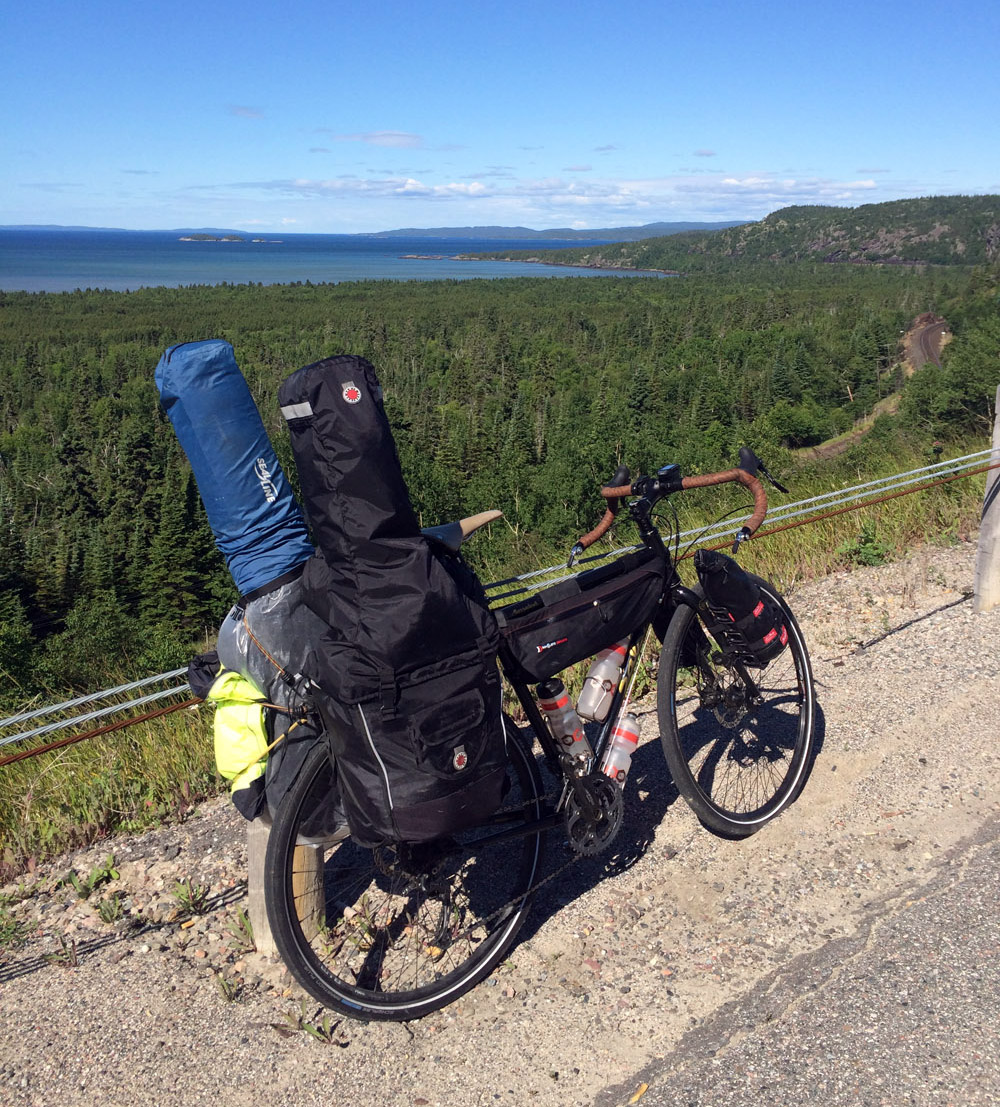 He continued, “We have to return to jobs and bills; the more oppressive parts of life. My recent ride around Lake Superior shed some light onto a new perspective of coming home and I have found myself walking away from the idea that the trip ends when you get home. We never come back the same people, and we continue to change even after we settle back into whatever routines resemble home. The trip breathes and lives itself out in our daily lives. It kindles new perspectives that lead to different choices about where we spend our time, our money, and our energy. In many cases we use these resources towards planning the next trip.”

–Ben Weaver plays this week, on October 3rd, in Minneapolis at the Cedar Cultural Center (416 Cedar Ave). The performance will feature songs, conversation, stories, photos, and videos from Ben’s Surrounding Water trip. There will also be local bicycle and food partners with offerings and contributions. Tickets are $12 in advance, and also available at the door if not sold out. Buy tickets here.