Pivot updated the Trail 429 last year, making substantial changes in its bestselling line. But I didn’t believe the chatter about it being a formidable climber while still being a downhill crusher — until I rode it.

I am a realist; I know the “quiver of one” claim usually means the gear isn’t great at anything. But man, oh man, did this bike shove those assumptions down my throat. I was giddy going up and ecstatic on the descents. The Pivot Trail 429 had me at “DW-link.”

We tested the bike over 4 months, covering terrain from Texas to Colorado. We rode hardpacked and fast XC trails with punchy climbs and rocky descents and bombed 10-minute-long all-mountain downhill runs.

In short: If the terrain is unknown, and you can only bring one bike, the Pivot Trail 429 is a top choice. You can reach the top of the climb with the energy and ability to bomb the descent and do so repeatedly. The Pivot Trail 429 delivered on all counts, proving to be a versatile one-bike wonder. 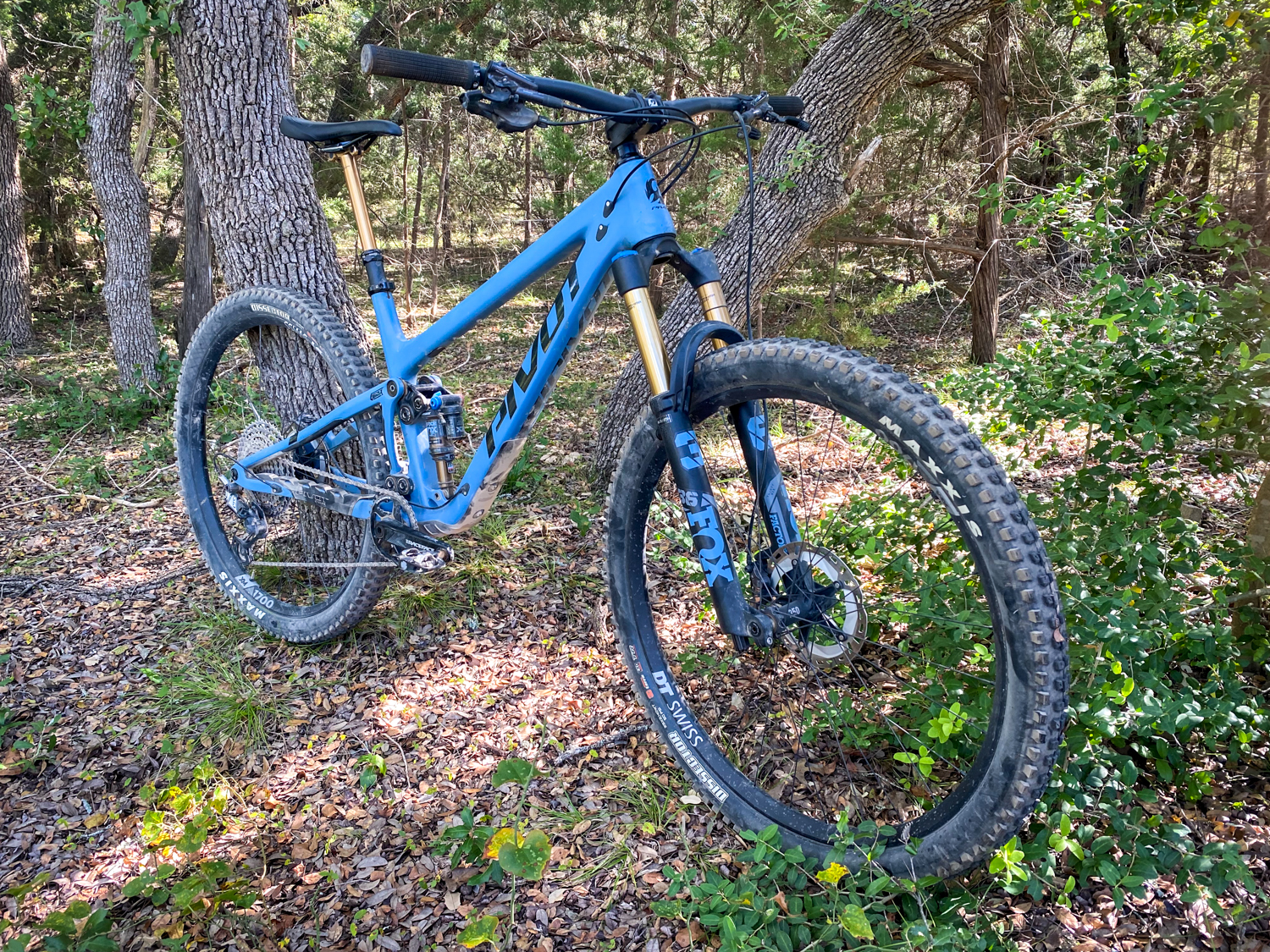 Our review sample was the third iteration of the 429 with plenty of notable changes. Lighter is righter, and Pivot shaved a claimed 300 g off a medium-size frame by upgrading the carbon fiber. This mass loss is impressive, as Pivot gave the geometry the trendy lower, longer, and slacker treatment.

The brand increased the reach on a medium frame by 16mm and reduced the head angle by 1.3 degrees (but steepened the seat tube 1.0 degrees). 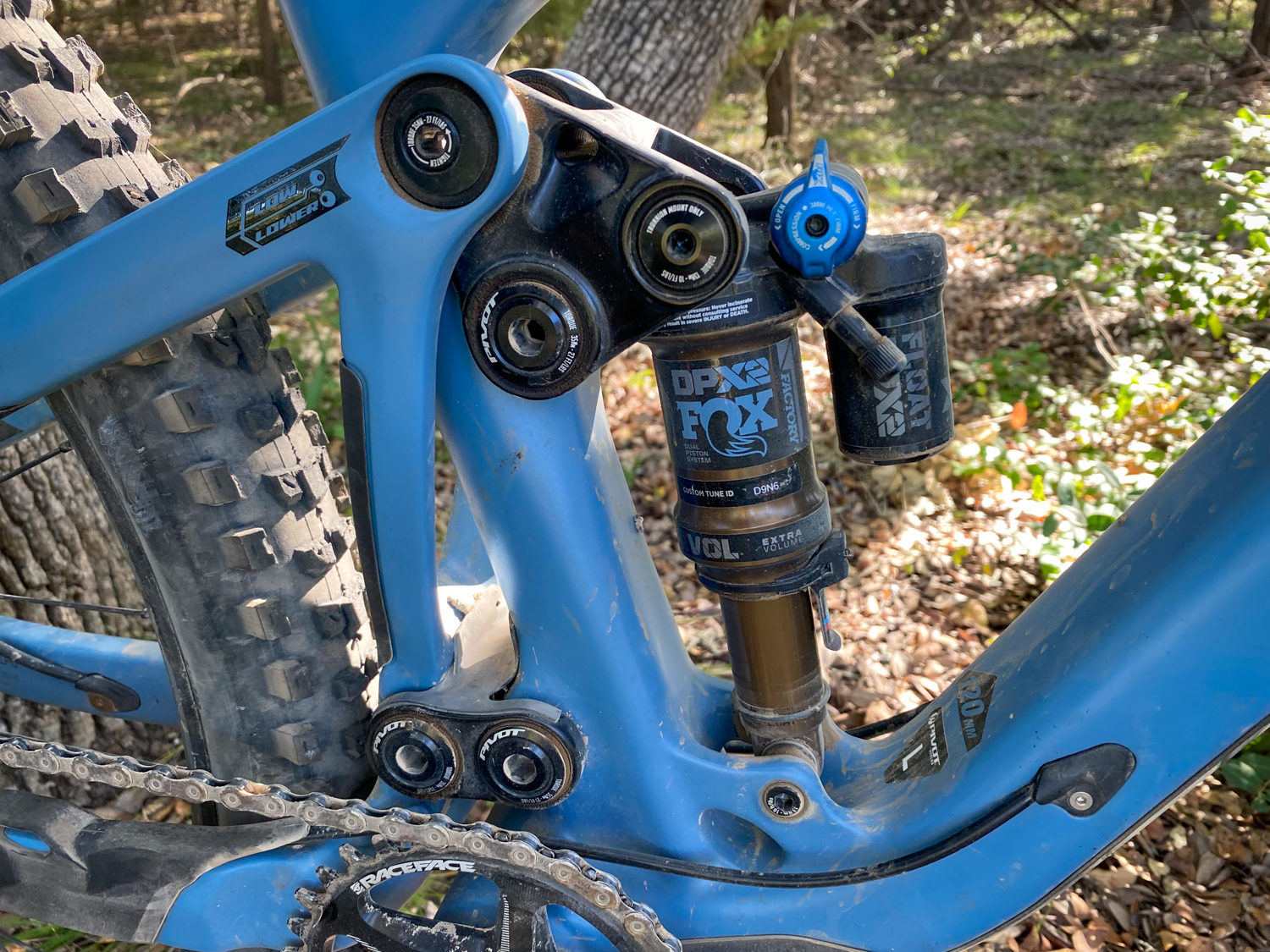 In the “lower” setting, it drops the bottom bracket by 6mm and slackens the head and seat tube angles by 0.5 degrees. The new shock orientation allowed straighter frame tubes and lower standover clearance. It also allows longer dropper posts and a larger water bottle capacity. 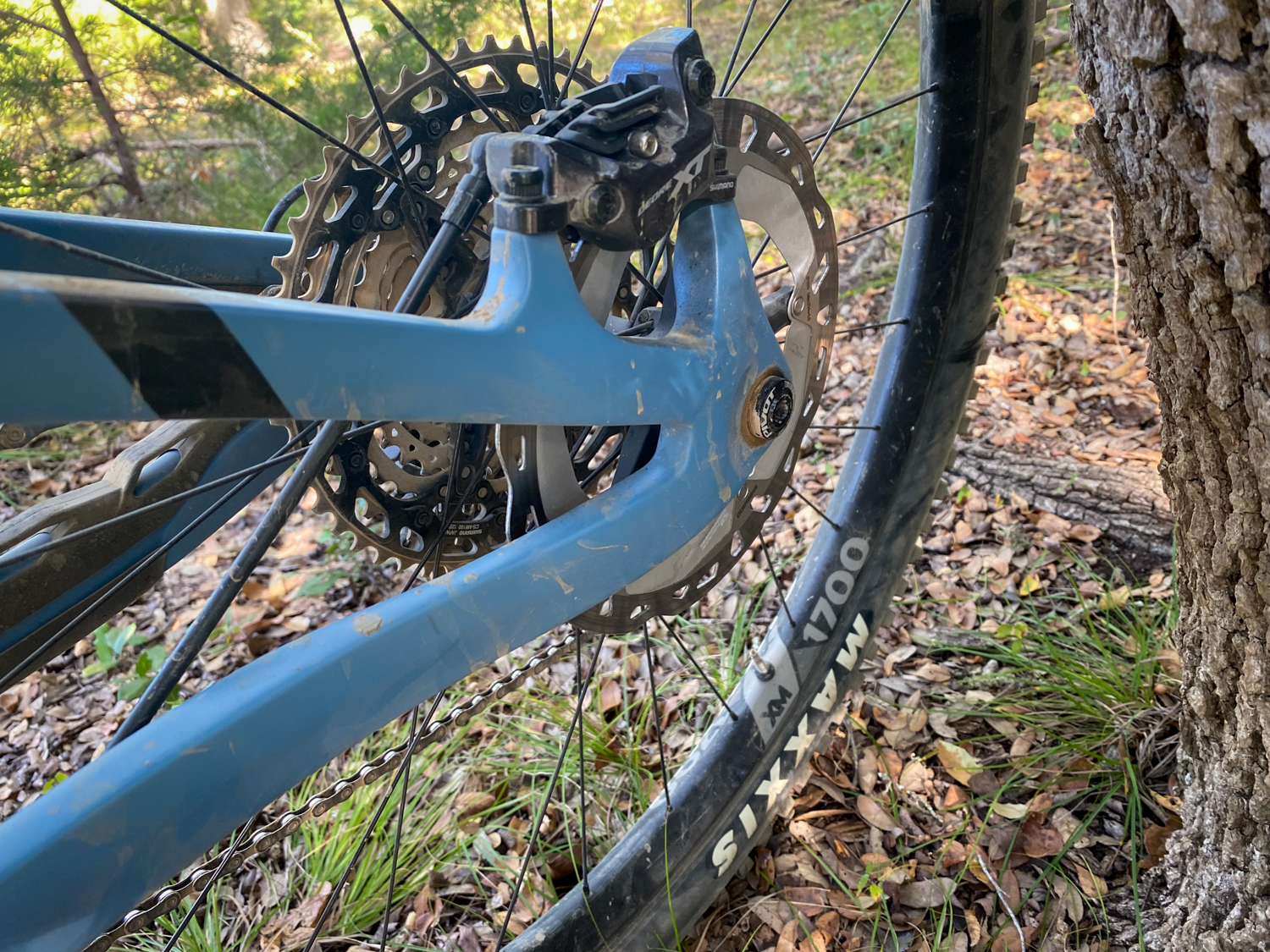 The new frame always mates with 29-inch wheels, but it is compatible with 27.5-inch hoops on its Super Boost hub spacing. A rider could also run a 29-inch front x 27.5-inch rear “mullet” setup. Pivot provides a taller stack and lower headset cup for running 27.5-inch fronts. Pivot states that the tire clearance is 29 x 2.6 inches or 27.5 x 2.8 inches.

There are five total frame sizes that Pivot claims covers riders from 4’11” to 6’7″. The press-fit bottom bracket is PF92, and all cable routing is internal with access via bolt-on ports. Threaded tabs accept a chain guide, and the direct mount for the rear brake is for 180mm rotors only.

A water bottle fits in the front triangle on all sizes, and another one can go under the downtube. A third set of bottle cage bosses lives on the bottom of the top tube for a multitool or similar accessory.

Both Shimano and SRAM component choices exist within Race, Pro, and Team levels. Then, the Pro and Team tiers have options for “Enduro” versions that replace a 130mm Fox 34 fork with a 140mm Fox 36 Grip2 unit.

You can find the 14 models listed (with upgrade options) on the Pivot Trail 429 site. MSRP ranges from $7,199 to $13,999. A frameset with a Fox DPS shock and RaceFace Next R carbon crankset lists for $3,949 for those wishing to build on their own. Pivot offers two frame colors: Pacific Blue and Silver Metallic.

Our test model was a large Pro XT/XTR Enduro with the standard DT Swiss XM1700 wheelset, which lists for $7,599. 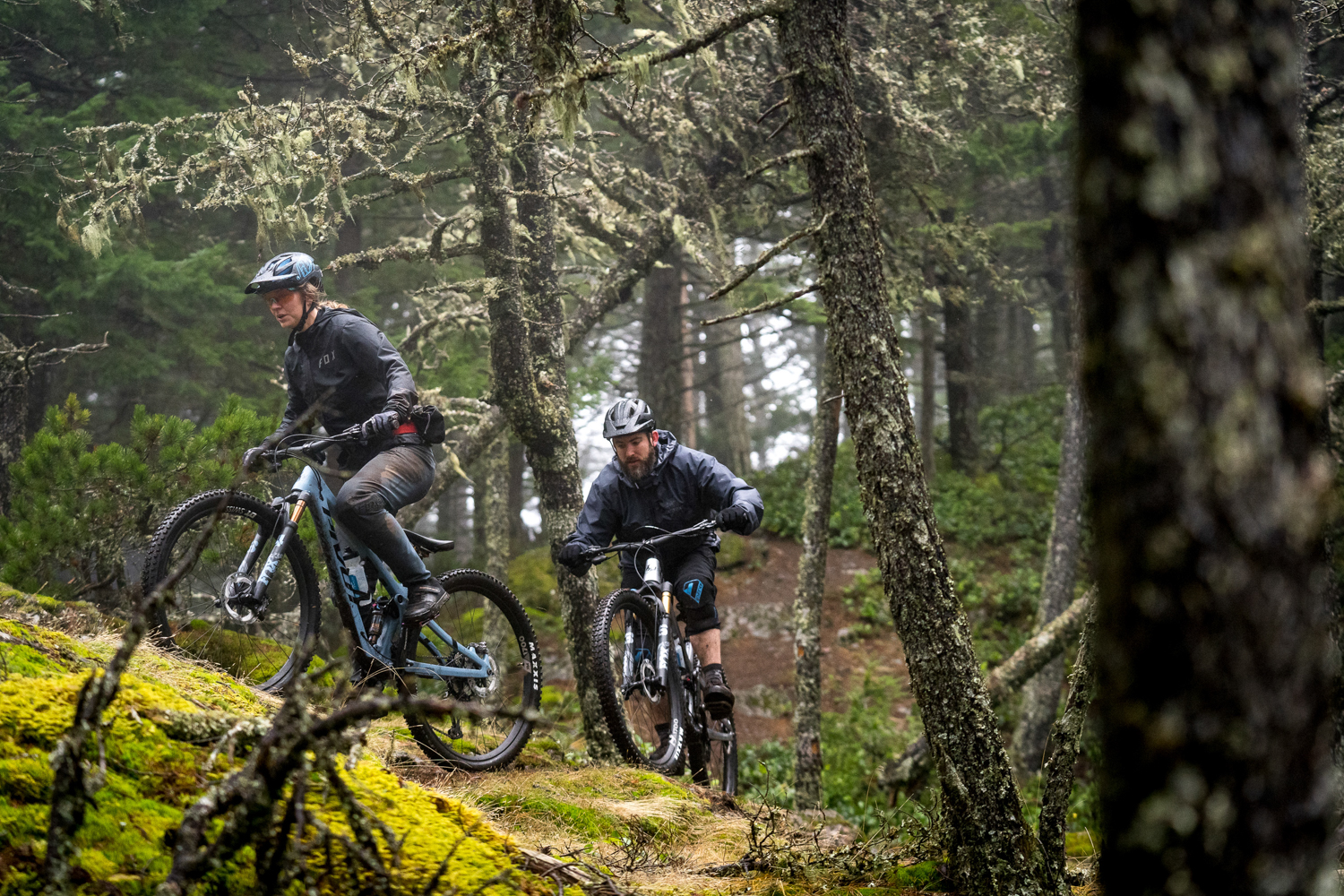 The pedaling efficiency was the first powerful impression the Enduro version Trail 429 made. The suspension felt supple and very active to and around the sag point. But punching the pedals beyond that resulted in immediate forward momentum. I was super surprised.

The extended front and its relative slackness pointed to a bike that’s geared toward going down. But man, the very first rocky climb revealed that Pivot nailed the DW-link suspension so that it converted as much of my oomph to rear-wheel torque as possible. I never felt the need to run the rear shock in anything but the open position except on pavement.

Climbing out of the saddle proved the geometry and cockpit dimensions for my 6-foot-tall frame to be on point for almost mindless, at-the-limit efforts. I didn’t have to be overly careful about my body position or weight distribution to keep the rear wheel hooking up and driving the bike.

Our test bike weighed a verified 28 pounds, 15 ounces, which Pivot delivered with tubes and no pedals. This figure doesn’t impress me when I compare it with the race-oriented XC bikes I ride the most. But it is light considering the Trail 429’s overall obstacle-eating capabilities. This added to the climbing prowess compared to other trail bikes.

The rolling downhills on cross-country loops strewn with rocky limestone ledges up to 2 feet tall were no problem for the Trail 429. And in most cases, it was too much bike in the Enduro form.

A few visits to the lift-served bike park in my area (yes, Texas has a ski lift) further revealed that the bump compliance of the chassis at speed matched its excellent uphill performance.

The Pivot Trail 429 demanded thoughtful line selections in rougher sections but rewarded the efforts with a ride that belied its suspension travel limits. Once I established my lines, I bombed confidently down intermediate trails at a speed that seemed out of range for a “trail” bike not too long ago.

The frame’s lateral stiffness elicited immediate chassis responses from leg and foot inputs made while leaned over in chop. The resistance to front-end twisting made bar inputs efficient and predictable.

I’m not a big gap-hucker or big drop fan. I like to go fast on flowy trails, and airtime is limited to dirt obstacles with good landings and rocky or tree-rooted descents that don’t involve drops much over the bicycle’s wheelbase.

The Trail 429 was all the bike I needed for this type of riding, and I could take it on XC-type trails without feeling I was giving up too much everywhere else.

Finally, the Pivot Trail 429 had the correct characteristics to remain comfortable over long days on the trails. I could see bikepacking on this rig on terrain too rough for my gravel bike. The suppleness around the suspension’s sag point and the larger air volume of the tires contributed to this perception. 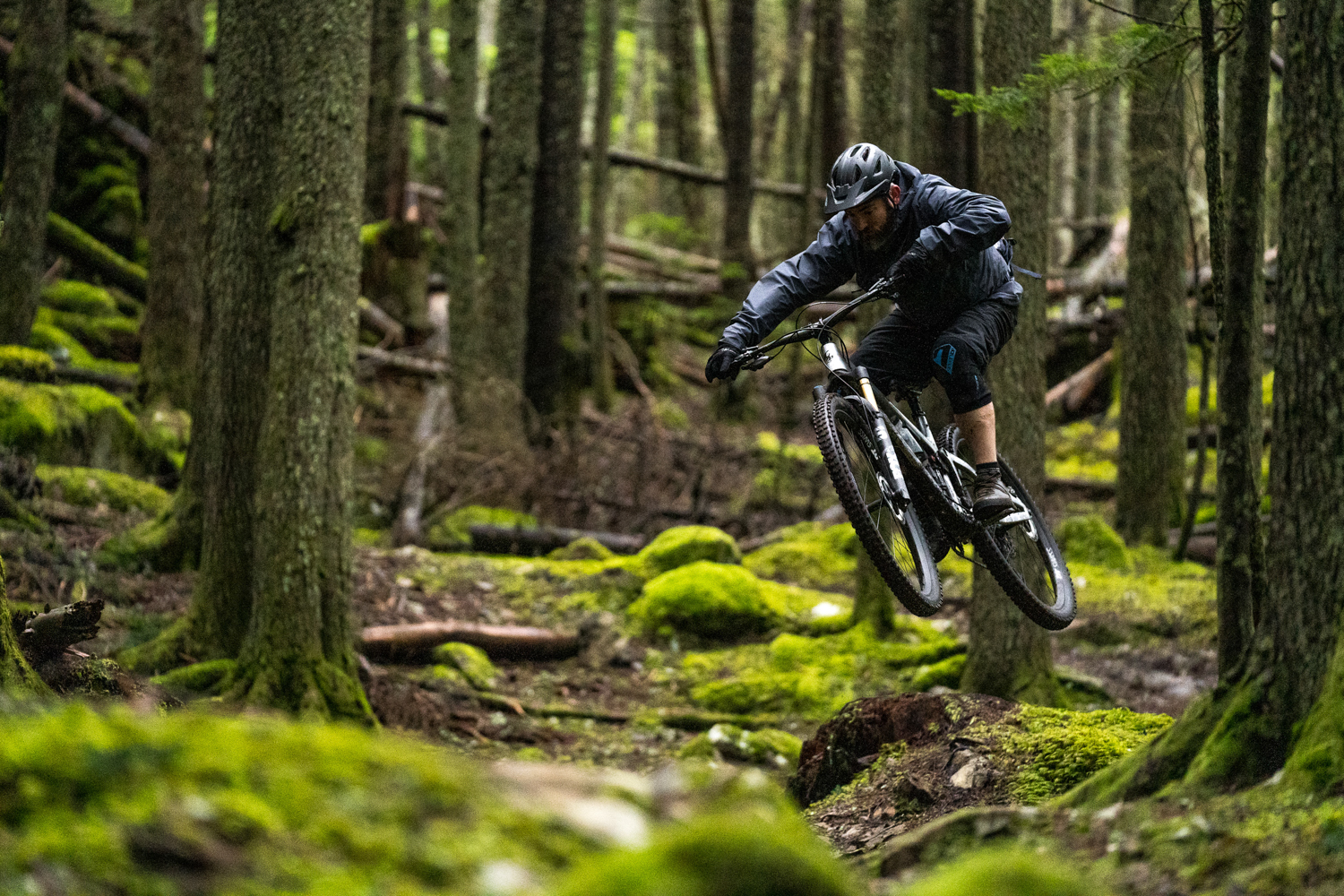 As I get older, I want less … everything. I have been fortunate to have several mountain bikes to test at once. But being responsible for all the bikes also means lots of maintenance time. And the hassles of schlepping multiple bikes on road trips. Finally, no way I could afford to buy all of them.

I’ve always said, don’t compromise on equipment and get the right tool for the job. But this bike proved that there could be a happy medium. If you’re not racing XC or are a DH specialist, but like to see elevation profiles that look like sawteeth, this bike can go up and down in style.

Indeed, if I were going on a road trip where I wasn’t sure of the terrain, this machine would be at the top of the list. There are lighter bikes and more plush rides, but the Pivot Trail 429 is incredibly versatile, making it a single bike with a high grin factor.