Home » Biking » Riding The Radweg: How To Tour Germany By Bike

Got a wänderlust for touring Europe by bike? Southern Germany might have your fix. With over 120 routes threading 5,000 miles of dedicated bike paths, there’s something for everyone. Here’s what you should know before you go.

Dotted with fairytale castles, medieval bergs, and half-timbered homes spilling with geraniums, Bavaria is a choice place to visit. And bike routes, or Radwegs, spaghetti across the region, offering a virtually car-free experience for those traveling by bike.

With a few days to spare between testing bikes in Italy and attending Eurobike, I bridged my time with a spur-of-the-moment ride along Bavaria’s southern Radweg, the Bodensee-Königssee bike route.

Here are a few observations I made that might inspire a trip of your own or make your planning a little easier.

Fahrrad–or Rad for short–is German for bike; Radweg simply translates to bikeway. Over the years, Bavaria’s quiet farm byways, remote gravel roads, and strips of pavement paralleling the highways have grown into a collection of official bike paths, connecting city to city. 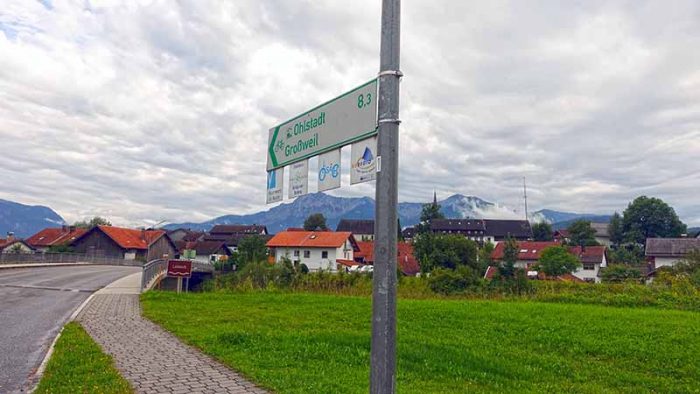 Routes are generally signed with a small bike icon (and an arrow pointing you in the right direction). They typically mark the next city or two en route and, occasionally, will flag if it’s part of the larger Radweg network.

Routes can be as short as 10 km and as long as 500 km (6-300 miles). Most of the routes connect, making travel by bike an enticing way to see the country.

The Bavarian Cycle Network has done a spectacular job of mapping Bavaria’s bike routes, and offers both free paper maps (order by mail) and GPX downloads for the top 10 bicycle tours.

Having neither, I simply Google-mapped my daily destination and selected bike appropriate routes. It nearly always put me on the official route or got me pointed in the right direction. 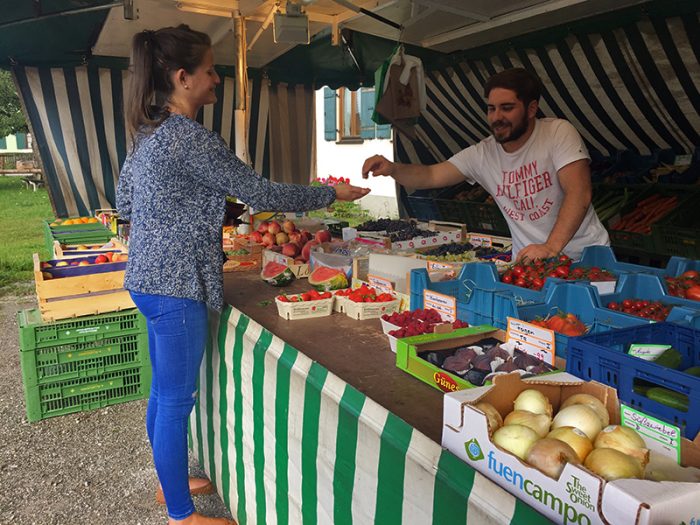 Unlike the more populated regions of the north (and outside the capital city of Münich), Bavaria is largely agricultural and quaint. Food, supplies, and a bed at a Gasthaus (bed and breakfast) can be found nearly every 10 miles or so. That said, they almost universally prefer cash over card. And because it’s agricultural, you’ll want to stop along the way to enjoy the bountiful harvest which is often sold at road-side stands for cash only.

Although English is compulsory in German schools, being rural, many (if not most), spoke little of it. This put my limited high school German to task. Google translate carried the rest.

Seems silly to mention this, but even more silly not to: bring your device. I used it to navigate, translate, post updates on social, Strava my route, and regularly stay in touch with family.

Most carriers have an international travel pass that will extend your current home talk, text, and data service for as little as $10 a day.

Here in North America, appliances run on 110 volts. Europe runs on 220. You can still power your devices with the different voltage, but you’ll need an outlet adapter for a flat two-prong plug to fit into the European pin-style outlet.

Universal adapters can be purchased to meet all your travel needs; the higher end versions will include a lithium battery to hold a reserve charge. I carried my own extra portable charger, which was invaluable to keep my phone charged while navigating by phone (which drains the phone’s battery quickly). 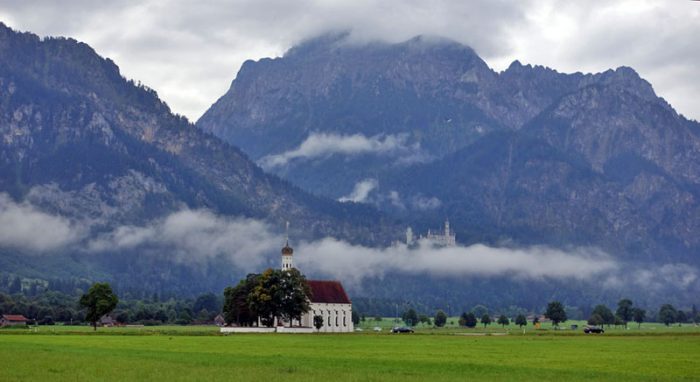 The best way to access Bavaria’s Radweg system is to fly into Münich, Bavaria’s capital. The MUC airport can store your bike box for about €8.00 a day. The Münich central train station, the Hauptbahnhof, can store large luggage for €5.00 at their ‘Cloak-Room’ (Gepäckaufbewahrung). Warning, the train station lockers are cleared after 72 hours. The Cloak-room will hold items for longer. 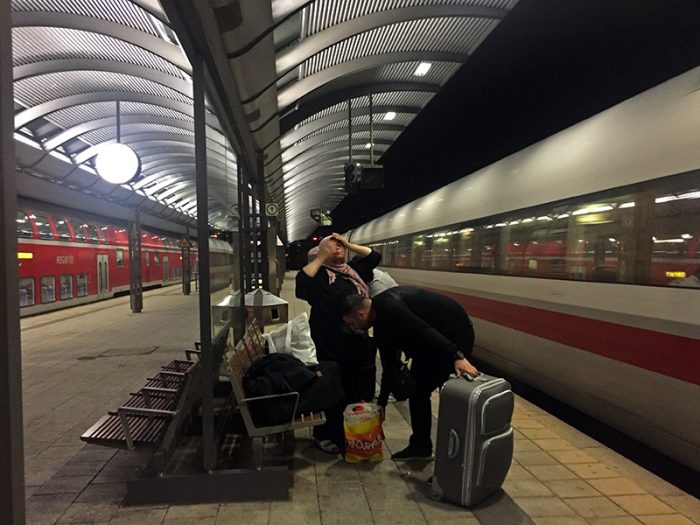 The Radweg system departs immediately out of the MUC airport, but Europe has a fantastic train network that makes it easy and efficient to get out of town quickly. Furthermore, they have room for bikes. Trains also make bailing on the route or skipping over sections an easy option. I took a train from Friedrichschafen to Münich–a three hour ride–for just €29.00.

9. Be Prepared For Rain

It’s Europe, it’s green, it’s going to rain. I brought a compact rain jacket and pant pair as backup and was happy to have it when the sky unleashed for a full day in the saddle. Summer temperatures were a humid 70˚F (even while raining), so cycling in a wool jersey could be a suitable option for a day, but for the long term, bring a rain kit and waterproof bags.

10. Castles Are Nice, But Visit The Churches 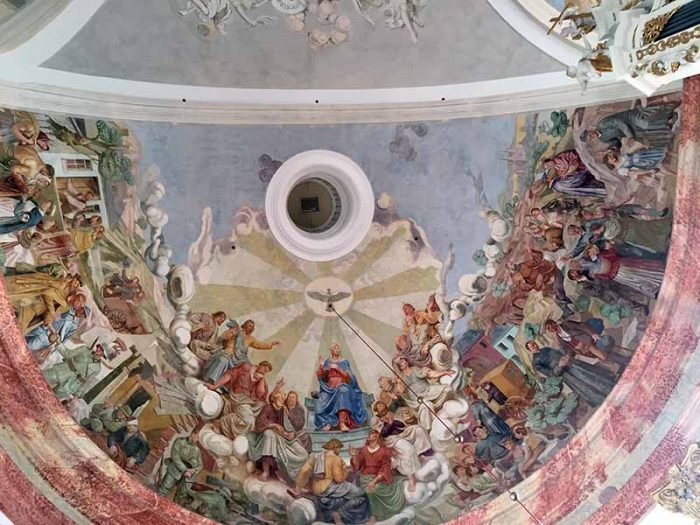 The Bodensee route has a fine pair of castles outside of Füssen, including Neuschwanstein, which inspired Disney’s own fairy tale castle, (for more castles and medievalry, check out the Romantic Road Radweg, from Würzburg to Füssen).

But for a real taste of art and architecture, stop by the churches. Bavaria has a rich Catholic history and even the smallest city churches are finished with spectacular paintings, ornate woodwork and gold trim. Best of all, they are open all the time and free of charge.

One word: Oktoberfest. Germany’s climate is prime for growing hops, so beer (or bier) flows like water and can be cheaper than soda. For a refreshing drink after a long day in the saddle, treat yourself to radler…a blond lager (usually a Pils) blended 50/50 with lemonade, limonada or grapefruit.

Heads up though! The radler goes down exceptionally smooth, leaving you promptly asking for a second.

Bavarian’s take pride in wringing out the beauty in nature and have a keen sense of woodsman-ship. There’s nary a roadside without a hand-hewn crucifix shadowed under an ornate shingled eave.

When not carved with artisanal craftsmanship, wood can be found stacked in meticulously designed piles–like, everywhere–drying in preparation for winter fuel. It was so pervasive that it became my “Wilson”, a comedic companion to help pass the miles. 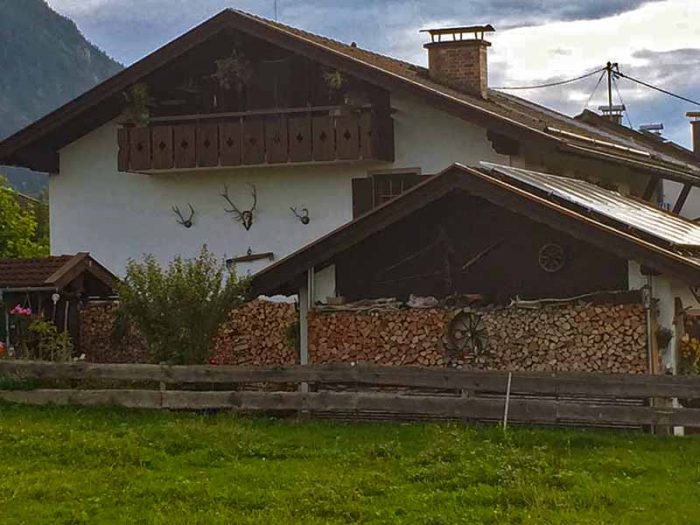 Pressed for time, I crushed my 200 mile route in two days, leaving me just enough time to snap a few shots and get an (occasional) bite to eat. I’d certainly endorse slowing it down and spending some additional time exploring the cities. With so much to see, you could easily cover 40-50 miles a day and plenty of time to take in the culture.

Considering your own bike trip to Bavaria? Additional information can be found at Bayern Information, Bodensee-koenigssee radweg, and Bikemap. 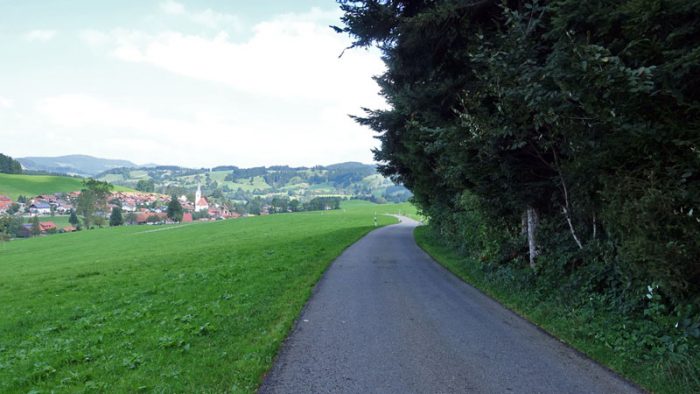