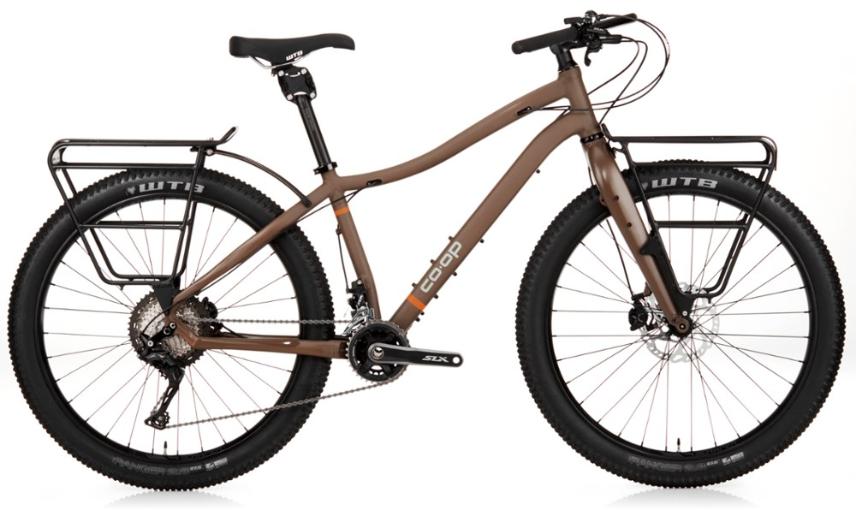 Like a line of stubborn marching ants, assembled media and REI product designers pedaled through the scorching sun of Arizona’s Sonoran Desert. Their mission (and mine): Put the brand’s purpose-built bikebacking bicycles to the test.

For two-and-a-half days, I rode nearly 100 miles along the Arizona-Mexico border. Over bone-jarring washboard gravel and tire-swallowing sand – and even a steep, giggle-inducing mountain descent – I got the feel for Co-op Cycles’ “Unimog” of touring cycles, the ADV 4.2.

While similar bikepacking setups are not new – see Salsa, Surly, Santa Cruz, and others – the ADV 4.2 presents REI’s take on the full adventure bicycle. And with it, REI aims to be a one-stop-shop of sorts with the ADV line. It already provides all the camp necessities, now it wants a bicycle built to carry them all.

Ask Ian Eburah, creative director for REI, who hailed it as the Unimog of adventure bikes after the legendary off-road vehicle. The comparison is apt, although maybe a bit of a stretch. 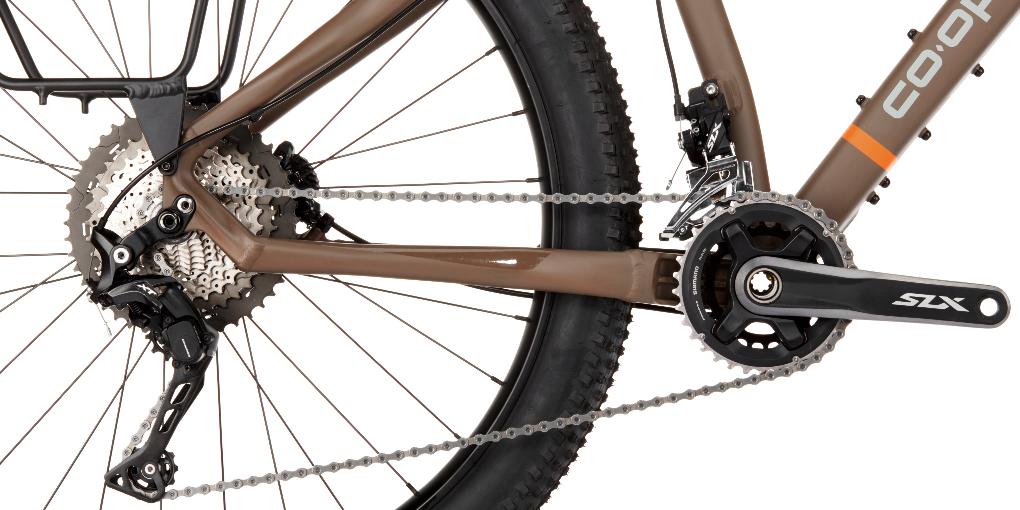 In short: With REI’s branded bicycle reboot now complete across all its offerings, Co-op Cycles aims to turn an outdoor outfitter into a bona fide bicycle retailer. The ADV 4.2 represents the top shelf of Co-op Cycles’ all-terrain touring offerings. And though its $1,899 price tag is not for the faint of heart, the 4.2 offers enough features and performance to back it up. Especially for those putting long miles on unpredictable, unfriendly terrain. 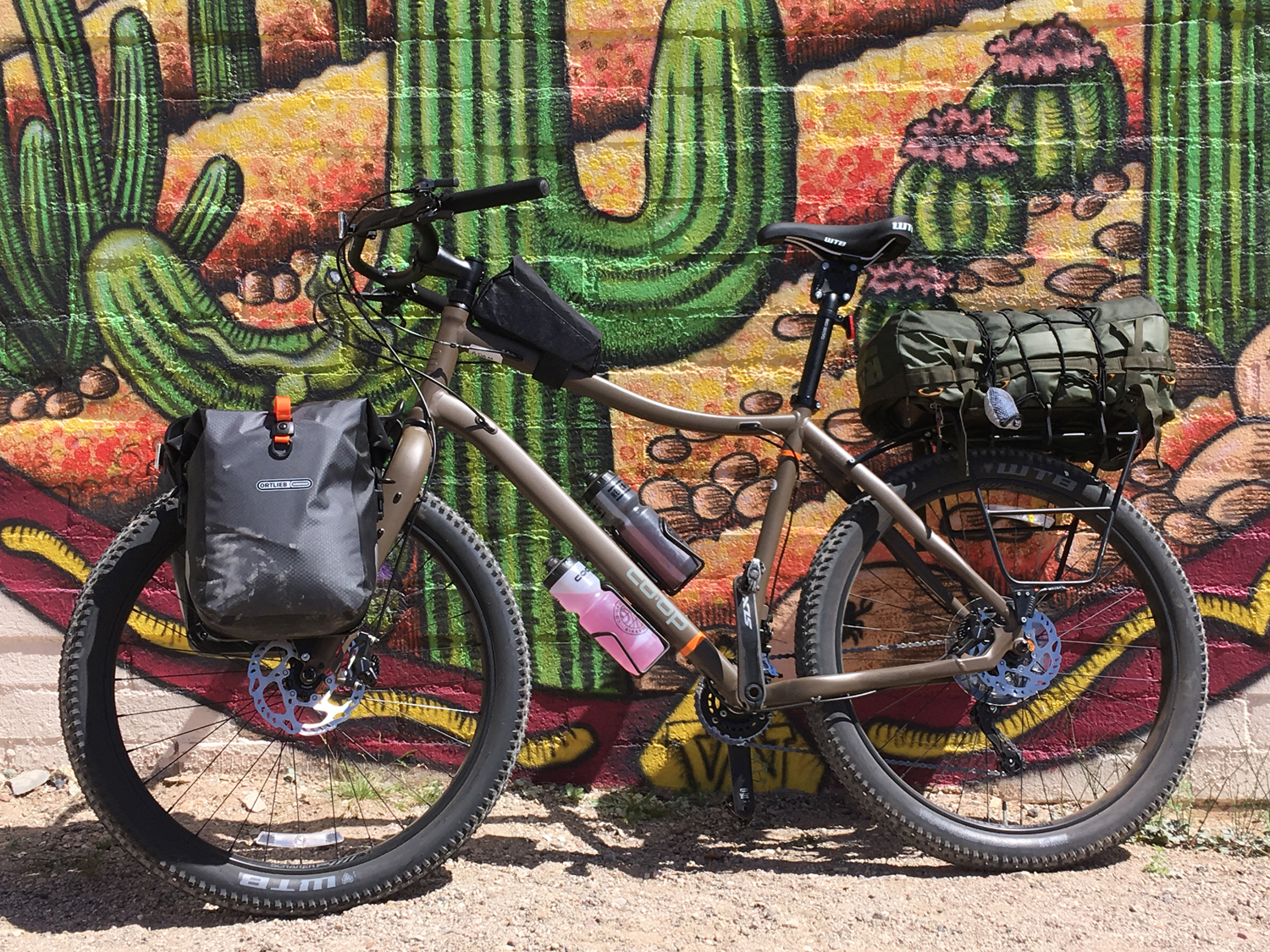 For the money, the ADV 4.2 provides a standard 6061 aluminum frame/fork with internal routing, Shimano SLX hydraulic disc brakes, 22 speeds, Jones H-Bar, 27.5-by-2.8-inch tires – with clearance for up to 3 inches – and thru axles.

In addition, you have mounts galore for adding racks, panniers, extra bottle cages, and lashing together almost anything else you need the bike to carry. And my personal favorite, the ADV 4.2 comes equipped with a Cane Creek Thudbuster shock-absorbing seat post. It isn’t quite as burly as a suspension fork or frame, but it effectively gives the bike enough chops to tackle some butt-bruising terrain.

While the 4.2 doesn’t boast exceptionally long chainstays (455 mm) or slack geometry (71-degree head tube angle), it rides bigger than it looks and is very stable.

When I first stepped aboard the ADV 4.2, it felt like sitting in the driver’s seat of a Greyhound bus. The sweeping jones bar and 640-mm effective top tube (size XL) had me feeling like I towered over the red Arizona dust under my tires. 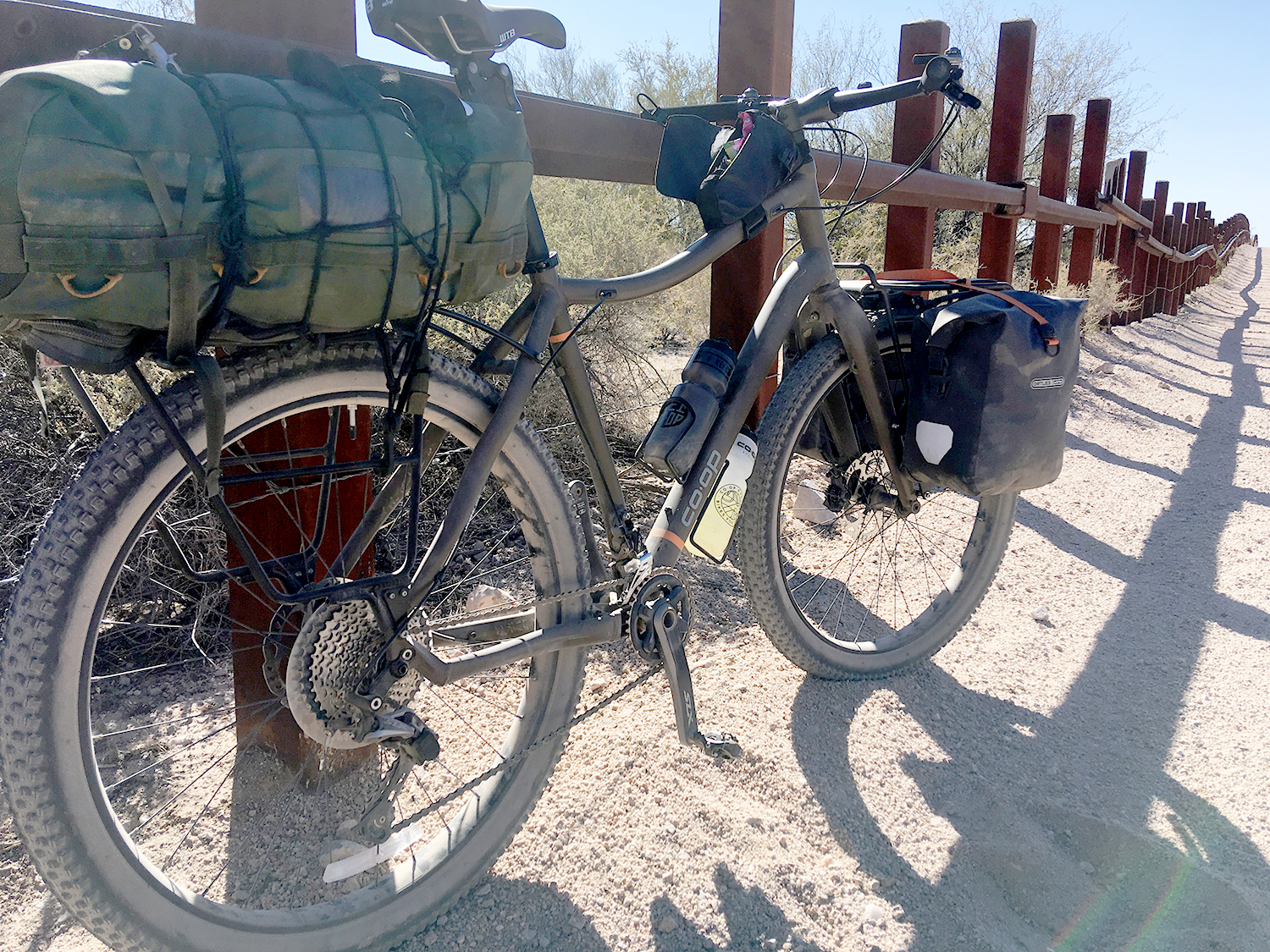 My first inclination, along with some others, was to try cranking a wheelie (because machismo). But this bike had none of that. It feels like it sucks itself to the ground. It’s a bummer for doing tricks but great for carrying loads across the desert.

I packed a one-person tent, sleeping bag, camera, a couple changes of clothes, sleeping pad, provisions, and miscellaneous extras onto the bike. Two Ortlieb panniers on the front rack a duffel strapped onto the rear rack carried my gear. I also added a top tube bag for nutrition along the way and two bottle cages along the down tube. In total, I estimate I added about 40 pounds of gear.

The bike handled the loads well. Of course, how you pack your gear for a bikepacking trip is crucial to the handling of the bike. But the 4.2’s stance and rider position make it highly stable, whether carrying loads low in panniers or high on a rack.

I don’t love that the 4.2 runs aluminum throughout. I typically prefer a lighter carbon option or “flexier” steel build. But with 6061, REI aimed for a compromise between weight and cost. And while the frame material isn’t a standout feature, REI designers clearly thought about how else to improve the riding experience. Enter the plus-size tires and Thudbuster suspension.

Our route took us along desert dirt roads otherwise traversed only by the Border Patrol’s Ford Raptor pickups. While Raptors chew up and spit out miles of rumbling washboard dirt, bikes (and riders) don’t fare so well with that abuse. And make no mistake, there was jostling and jouncing aplenty.

But with some air bleed from the 2.8-inch tires, the ADV 4.2 absorbed a fair amount of shock. And the Cane Creek Thudbuster swallowed the real jolts that rang through the frame. The result, again, was like riding a bus. It wasn’t a smooth ride, but the vehicle bore the brunt of the abuse. The rest was just a bouncy, but not painful, ride.

After about 70 miles of bumpy but relatively flat terrain, we unburdened the ADVs to see how they rode “naked.” I took the lightened touring bike for a 20-mile loop into Diablo Canyon and Estes Canyon. There, I not only got (and had) to use the full 22-speed gear range, I also saw just how capable the ADV 4.2 is on more mountain-like terrain.

Steep climbs were manageable. If there’s a downside to this bike, it’s that it doesn’t attack well. Obviously it’s not set up for time trials, but going up steep hills, even without extra carriage, is a chore. The wide Jones bar and geometry do not cater to hopping out of the saddle and powering up hills. So you have to lean on the gears.

Fortunately, the 2 x 11 setup hauled me up. Then, on the descent, this bike sang. Pavement on the climb turned into hard, rocky trail. And it was steep. While it felt like a bus touring, the 4.2 Shimano Deore hubs spun like a dynamo on the descent. And without extra bulk weighing it down, the tires and Thudbuster gobbled up the terrain, keeping the bike surprisingly nimble. 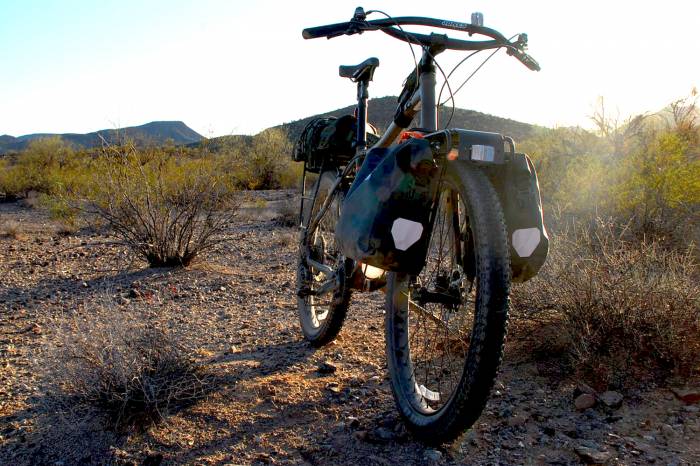 At first, I thought the ADV 4.2 was like an RV. It felt like a bus and was built to take you and all your gear outside city limits. But after riding it on a host of terrain and topography, with and without bikepacking gear, I understand it’s much more like a pickup truck with a cabover camper.

Fully loaded, the ADV 4.2 is a well-equipped recreational vehicle. It rides big and handles stable. But peel off the excess and, like any pickup, you can take it almost anywhere. It’s not meant to go fast, but it can. It’ll carry as much or as little as you need, so it’s a fit for off-grid bikepacking getaways or trips to grocery store.

All that fun comes at a cost. At $1,899, it’s not a bike everyone can afford. And brands like Salsa, Surly, and Santa Cruz make awesome bikes – with varying combinations of more affordable or more performance-minded features.

But with the ADV 4.2, REI enters the market with a totally respectable offering. It’s less aggressive than other all-terrain bikepacking setups, but it stores more muscle and speed than expected.

And of course, unlike its competitors, the ADV 4.2 retails alongside everything a bikepacker would want for a well-equipped adventure.

Up Next: First Ride: Rocky Mountain Thunderbolt Is Lightning on Trails