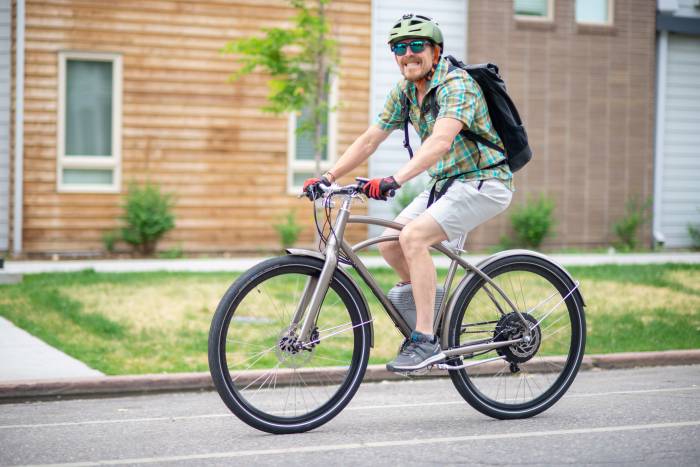 The electric bicycle is gaining traction in the U.S. And after riding a Vintage Electric e-bike for the last month, I know why.

Early morning sunlight filters through leaves. The gold rays bounce off my sunglasses and helmet as I silently spin pedals.

This is like no bike riding I’ve ever experienced. And to think I’m wearing long pants and a dress shirt, it’s one heck of a fun way to start a workday.

E-Bikes: What They Are

You’ve probably read about electric bikes by now. They’re booming in popularity, making it into every realm from commuters like this Vintage Electric, all the way to full-suspension mountain bikes.

And you’ve probably heard all kinds of controversy around them. That they’re ruining mountain bike trails or considered “cheating.”

I’m not here to argue any of those points. I’m looking at a specific aspect — the commute.

Commuter e-bikes come in many makes and models. This one has “pedal assist,” meaning the electric motor kicks in only when you pedal.

And for commuting, an e-bike is decidedly awesome.

Why? First, they’re screaming fast. I’m not kidding about that 30 mph figure above. In my month of commuting on this demo bike, I usually rolled along between 25 mph to the *maximum-allowed top speed of 28 (*for the “Speed Pedelec” category). But with some additional pedal power I was able to push it to 30. In a city, that’s traffic speed.

Second, e-bikes can park anywhere you park a normal bike. Just pull it up to a bike rack and lock it. No parking woes.

Other positives are the abilities to use most bike lanes, avoid a lot of traffic, and have virtually no fuel bill.

The modest exercise, fresh air, and silly smile from the fun are definite bonuses too.

I’ve ridden both bikes and motorcycles a lot in my life. And riding the Vintage Electric puts the rider in a slightly odd position between the two.

I think this is an important distinction and key to safe riding.

Most cyclists aren’t very familiar with what it’s like to roll along at 30 mph. It’s awesome fun, but with that fun comes a lot more danger than with your average 15-mph commute.

And cars definitely don’t know how to react to a cyclist cruising along at 30 mph. I found myself covering the brake a lot as cars inched out at two-way stop signs before realizing I was moving way faster than your typical biker.

Thus, I adopted my motorcycle motto into e-bike riding: Ride as though you’re invisible – because you pretty much are.

Beyond speed, there are a lot of other minor differences about riding an electric bike. I’ll try to give a quick rundown of my notes here.

Compared with a typical road bike, the Cafe is heavy! I didn’t get a chance to weigh this one. But I carried it up and down my basement stairs, and I’d guess it at about 70 pounds. You don’t feel that when biking thanks to the electric motor, but you definitely do feel it when moving the bike around your house.

This leads to an important question about range.

You don’t want to ride this with no assist for more than a very short limp home. I rode it a few blocks without assist and it felt like pedaling a school bus.

So your range is critical. The Cafe has a really good battery life indicator. In more than a dozen rides, I was able to easily keep power flowing between charges by dialing back the assist when I got below 25 percent power remaining.

The brand claims a range between 20 and 60 miles. And while this seems very broad, it’s probably accurate because of this next point.

While biking, you can toggle up and down on assist, from 1 to 5. With assist set at 1, the bike accelerates slowly up to an easy ride at about 18 mph. Set it at 3, and you accelerate pretty quickly and roll along easily spinning at approximately 22-27 mph on the flat.

Pump that bad boy to 5, and rocket off the line like a mini Tesla! You’ll hit 30 in less than 10 seconds on the flats and climb steep hills at 25 mph. YEE-HAW!

But put it at 5, and you’ll eat through the battery pretty quickly. It’s hard to judge range for this reason. But overall, the 20- to 60-mile range seems pretty accurate in my testing.

If you have a heavy, super fast bikes, you better be able to stop. Thankfully, the Shimano hydraulic disc brakes coupled with regenerative braking works very well.

I had one particular close call: A person parked on the right, digging around in their car, quickly spun into the bike lane without looking. I was doing about 25, and slammed on the brakes, skidding to a stop just feet from the frightened person.

Again, drive like you’re on a motorcycle, because you’re moving like one. Fortunately, the braking works great, and even helps juice the battery up a little.

Suspension would be nice.

To me, this is a possible flaw in the design. The bike is so fast and heavy, it really can jar you as a rider when you hit any significant bumps.

Remember, you’re riding a fully rigid bike that weighs upwards of 70 pounds at 30 mph. Unlike a road bike, you can’t bunny hop this bad boy when you come to a set of railroad tracks! So you roll over them, fast, and the entire rig pounds through the bumps.

Here, a short suspension fork would really help. The jarring was tolerable, but I suspect all the shock would eventually beat up the bike. All those components get hammered during big hits.

I rode the bike for about a month and had no problems with durability. But that would be a concern for me over a longer period.

Console and lighting are simple.

The interactive touch-point is simple. A single button turns the bike on and off.

Two other buttons operate all other functions. They dial up and down assist levels. They also turn on and off lights.

The bike comes equipped with a nice, bright headlight. It also has a nice LED taillight under the seat. Turn them both on or off by pushing and holding one button.

I’d personally like to see them always-on, like a motorcycle. At the speeds you ride this thing, you should run lights during the day.

The Vintage Electric Cafe has a 750-watt torque-sensing drivetrain. This is all powered by a removable 15-pound battery housed right above the bottom bracket.

The battery removes and installs easily. Just pull the little pin, lift hard on the leather strap, pop it loose, and slide it off the rail. Installation is in reverse, and super easy once you do it a couple times.

The battery charges from dead in two hours. Just plug it via a charging unit into any wall socket.

I did this at the office each day, giving me plenty of juice to ride to and from work without getting below about 75 percent battery power (on an 8-mile roundtrip ride).

One gripe: The battery charges via a pin-socket system protected from moisture by a rubber stopper. I lost that rubber stopper within about a week. For a vehicle that costs as much as a decent used Toyota Corolla, you shouldn’t be able to misplace a piece that easily.

So, Why Should You Buy?

Getting down to brass tacks: Should you buy one?

I strongly considered buying the demo bike. I liked it that much. But I decided against it due to the recent purchase of another vehicle. And really, this gets down to price.

The Cafe costs $4,000. That’s no small investment. As I noted above, you can buy a pretty darned nice used car for that much dough. Shoot, you can get a serviceable used Ducati Monster for the same money.

But these are different beasts, and I think the Cafe has its place. And for some, it will definitely be worth the cost.

If you live in a city and want to get around quickly, easily, and with zero parking concerns, the Cafe is a great option. It opens up parking at bike racks – just make sure to buy a top-notch lock. Park it in your apartment at night (but stairs suck). Wheel it right into your office and have transportation dialed.

For folks in a big city who don’t want to own a car, or for those who just want a way to commute without driving their full-size pickup into the city, this one is a solid option.

I ultimately really enjoyed commuting on the Vintage Electric Cafe. It could fill a big niche in daily life. If bikes like this caught on, traffic congestion could become much less of an issue around city rush hour.

If you get a chance, throw your leg over one of these. It’s not perfect, but it could be a great tool in mitigating commuters’ daily grind.