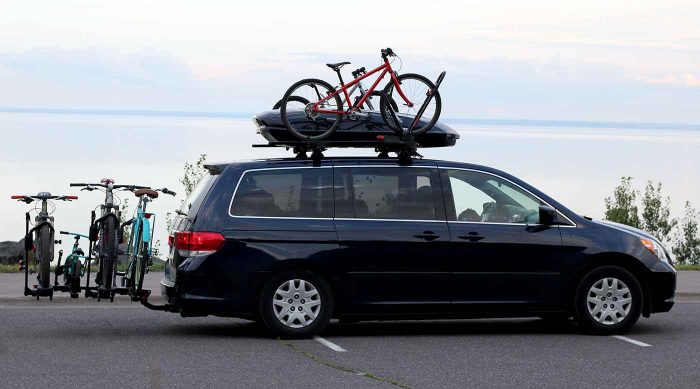 With the campsite booked and the bikes tuned, we were ready for a weekend of day hikes, singletrack, and campfires after dark. But first we had to fit all the gear in the van.

This was no small feat. The interior looked like a Tetris game of smart stowage, including a trunk area stacked to the ceiling and sleeping bags stuffed under seats. The dog sat on the floor, contently leashed for the ride.

Bikes and other bulky gear went on the exterior. A cargo box, tray mounts, and a hitch-rack on back made the haul possible with the right products in place.

We turned to Yakima for a roof system. The brand’s aerodynamic, teardrop-shape JetStream bars on top, with add-ons, combined with a four-bike hauler on back would get the job done. 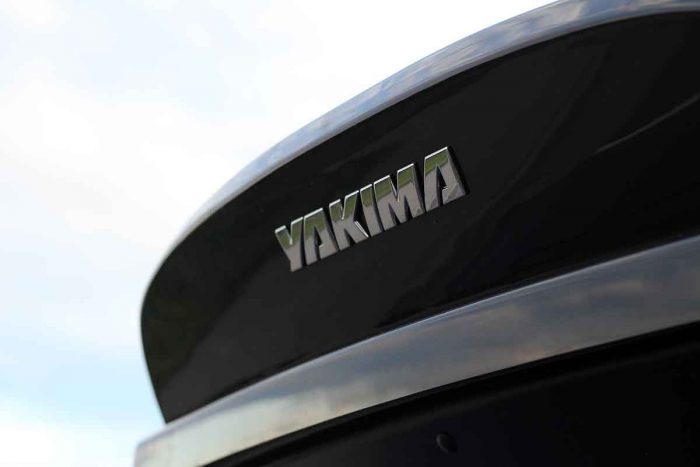 The no-brainer first step was a gear box. The ShowCase 15 added its namesake 15 cubic feet of cargo space on the roof. It was easy to install and could be used on round, aero, factory, and square crossbars.

I liked the push-button latch that locked the box closed. It was simple to use when balancing halfway out of the van and reaching for gear.

It opens on either side and swallowed our tents, shoes, bike helmets, camp chairs, and all the other things that didn’t fit inside. At $679, it’s a lux hauler, made in the USA, and should last for years.

Like all Yakima boxes, the ShowCase is made of a thin and tough ABS plastic. Its shiny finish and streamlined design allow it to blend with the automotive aesthetic on most trucks and cars. The model we picked, the ShowCase 15, measures about 80 inches long by 36 inches wide, allowing for a bike mount on either side.

Yakima’s FrontLoader racks ($189 each) let you leave the front wheel on a bike mounted on the roof. We put a pair on the minivan and hoisted the kids’ rides high. 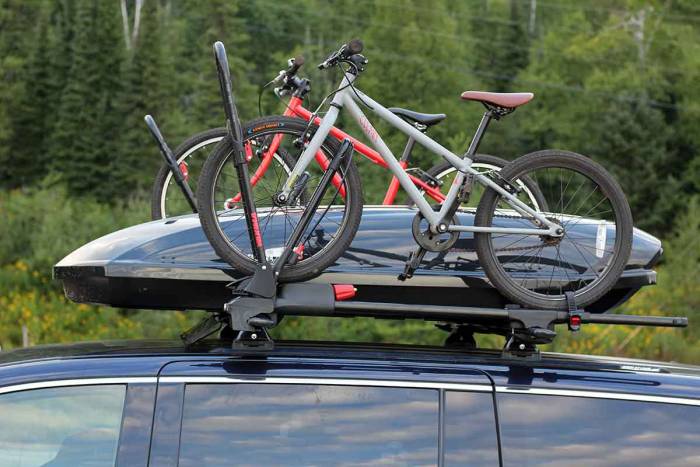 The FrontLoader design clamps the rear wheel to the tray and cradles the front wheel in two adjustable arms. There is no contact with the bike frame, so you don’t worry about rubbing and wear on a painted metal surface.

They are made to adapt to just about any bike, including road, mountain, and semi-fat (up to 3-inch tires). The kids’ bikes fit, though we had to crank the main screw mechanism to its smallest setting to tighten onto the smaller wheels. 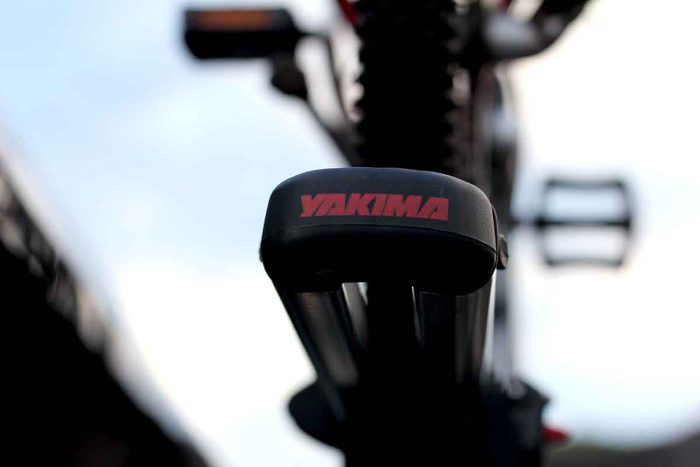 This system holds the bike upright when loading — a nice feature while we adjusted and secured the rack mechanism.

Overall, the FrontLoader offered no-fuss functionality, held bikes securely in place, and allowed them to go off and on in seconds.

The final piece of our family-hauling puzzle, on the back of the minivan, was a massive four-bike mount.

These two racks link together and plug as a large unit into the trailer hitch. All kinds of arms, buckles, locks, cables, hinges, and pins are involved in the octopus-like contraption. It’s heavy and hard to fold up and down with one person, though it’s a breeze with two.

The on-and-off was quick enough with Yakima’s arms and crank-to-tighten tray buckles.

One important tip: Be careful with bike handlebars on this setup. Wide bars on a bike mounted in the first tray can hit the rear window of a van. It took a bump in the road and a clear smack for us to realize we needed to remove my wide-grip mountain bike from the first position on the rack.

Unfortunately, the HoldUp amalgam blocks your licenses plate when folded up, and probably the back camera on many vans.

But it takes a beast to haul the eight wheels and four bike frames for which it was made. The max load is 240 pounds, which is more than enough for almost any combination of bikes. 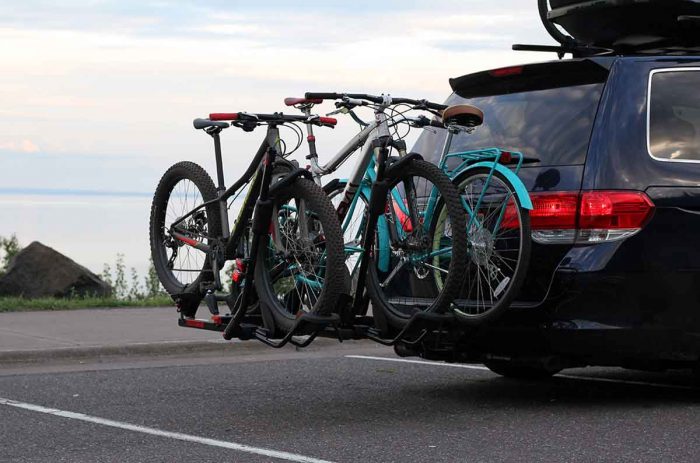 We’ve traveled a couple thousands miles with the HoldUps and so far, it’s driven like a dream. Just be sure to correctly mount the bikes and jigger the safety pin into place on the arm.

Overall, the Yakima setup was a key to moving kids, bikes, and gear far from home and into the woods. The components are not cheap. But we required a specialized setup and huge capacity for all the toys and the extra gear my family sees as requisite for camp.