Yeti introduced the SB115 as a strong contender in the new category of down-country bikes. We put the SB115 to the test for this review.

Down-country bikes, a new category of doped-up mountain bikes with cross-country geometry and nearly enduro spec, are the hot trend for 2020.

Light and fast, with short suspension and relaxed enough geometry that you can hop, drop, and rail, they’re the flip side of the coin from the megatravel 29ers that nabbed riders’ attention over the past couple of years. Without sacrificing weight, a down-country bike — like Yeti’s SB115 — has enough travel to hit most trails, without the weight penalty of a bigger bike.

Yeti SB115: A Bike That Loves to Party 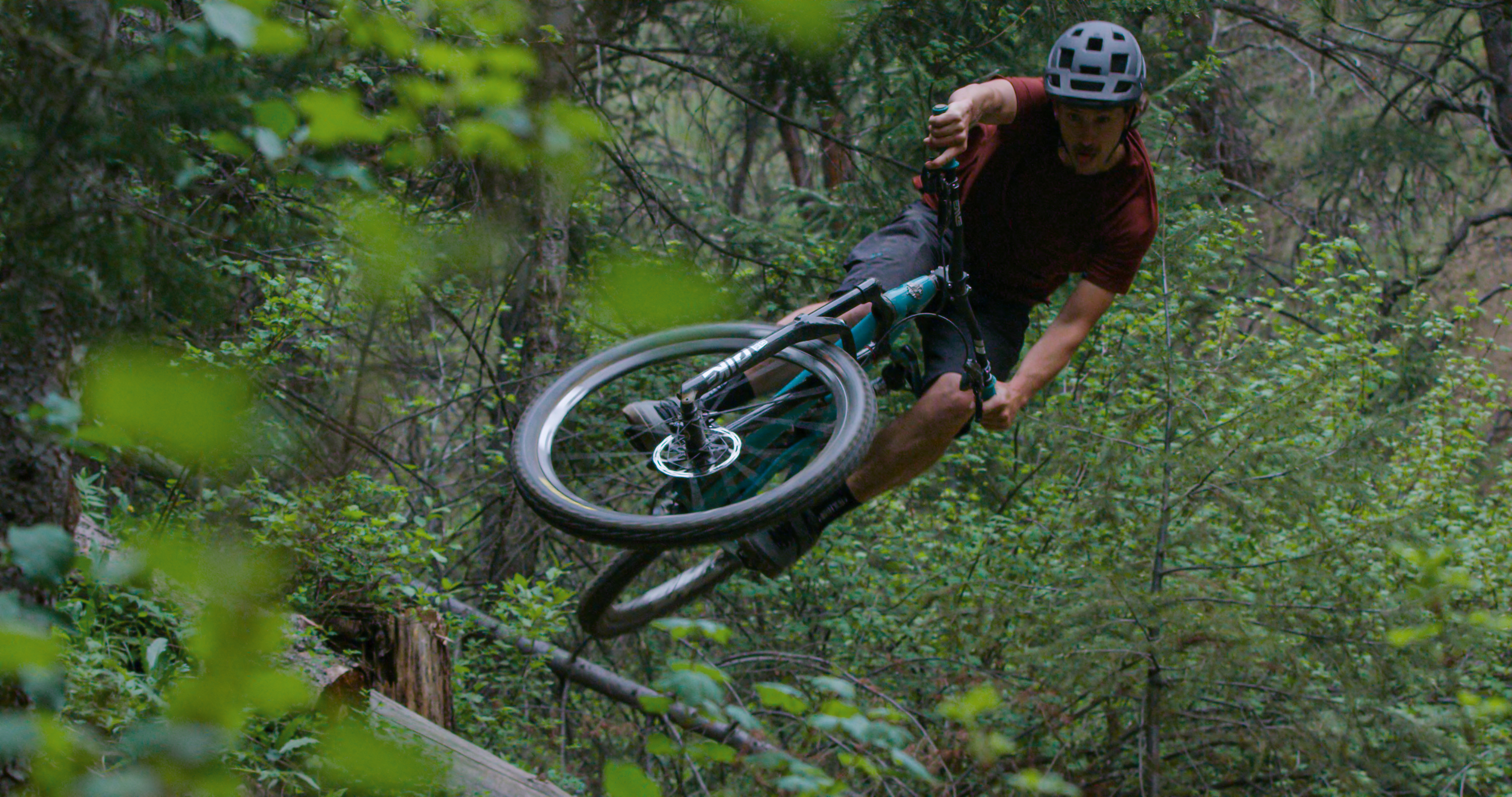 Yeti’s new SB115, which we’ve been riding for the past month, is a party animal. It has a 67.6-degree head angle, particularly suited to when the party goes uphill as well as down.

The 27-pound, short-travel 29er SB115 has 115mm rear travel and 130mm front travel. It has the geometry of the brand’s BC Bike Race-winning 100mm travel 29er. More squish makes it less teeth-rattling than the SB100 and easier to maneuver in more terrain, without sacrificing speed and agility on climbs.

If you’ve followed Yeti Cycles, you know the brand likes to “Lunch Ride” models — adding more suspension to an existing bike to make it more capable in more terrain. Functionally, consider the SB115 a Lunch-Rided SB100 that doubles as a replacement for the now-discontinued SB4.5. And honestly, that SB4.5 may have been the first down-country bike, although the category didn’t exist at the time.

Think of down-country bikes as a ride with the frame, weight, and geometry of a cross-country bike. Then, sass it up with wide bars, big tires, and more suspension to help it punch above its weight class on fast, techie descents. And — this is key — all without compromising the climb.

When the SB100 launched, riders started swapping their 120mm forks for 130mm and 140mm, which inspired Yeti to take a look at the SB100 and what it could become. Though the SB100 doesn’t use the full stroke of the rear shock — many bikes don’t use their full rear travel — it wasn’t possible to just give it a longer shock stroke.

The bike also needed new pivots to keep the suspension intact, and a new link to keep the geometry efficient and lively, so the SB100 Lunch Ride became a new model instead. The bike also got new Switch Infinity hardware — a threaded version with a washer and locking nut on the inside and the same protective fender used in the SB100.

The SB115 takes what Yeti learned from making big-travel 29ers and the short-travel SB100, and packing the best climbing and descending features of both into a rowdy but not ridiculous ride.

Whether you love uphills, or you ride them to get to the downs, this bike will take you places. No one wants to feel spent before the day’s big downhill. Because this bike is so light and efficient climbing, it helps you save energy while you’re pedaling uphill. There’s no bobbing, no need to lock the shock, just your power translated through the pedals into forward motion, even when the up is punchy, rocky, and technical. 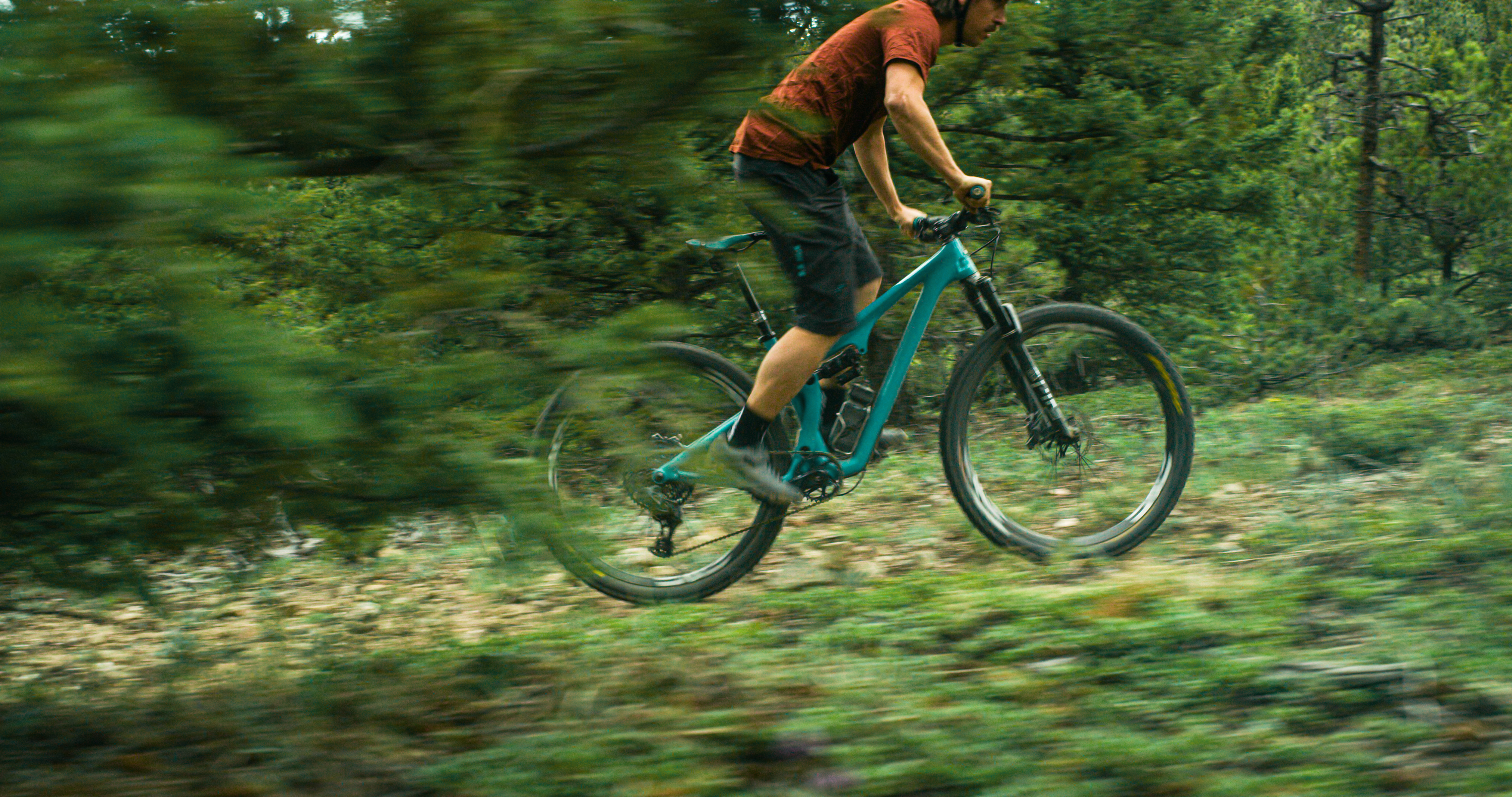 When you top out and it’s go time, you and the SB115 will be ready to rally — just drop your saddle and roll. While this bike isn’t as slack as Yeti’s SB130 or SB150, it’s designed for fast, technical descents, whether you’re carving berms or straight-lining a rock garden.

Though the head angle is within half a degree of the SB100, it’s more capable on the downhill because it has more suspension. Twenty-five miles of east coast single track in, I was smiling until my face hurt.

Want air? So does the SB115. Where the SB100 has a somewhat serious wheels-on-the-ground personality, the SB115 likes to hop, whip, and sail through the air.

It slithers through tight corners like a snake, both up and down. On an old-school climbing trail that had been rerouted because its hairpin turn was so tight, I cruised through then crushed a machine-built jump line, pedaled back up through the hairpin turn, and swooped through berms, rock hops, technical rolls, river crossings, and more before climbing another 750 feet of technical vert home.

The SB115 isn’t a mini enduro bike. It was responsive and energetic, with enough suspension and Yeti magic that it kept us from getting into trouble when the downhill went from rolling to raging. It smoothed out the trail, but we still felt the trail — in a good way. 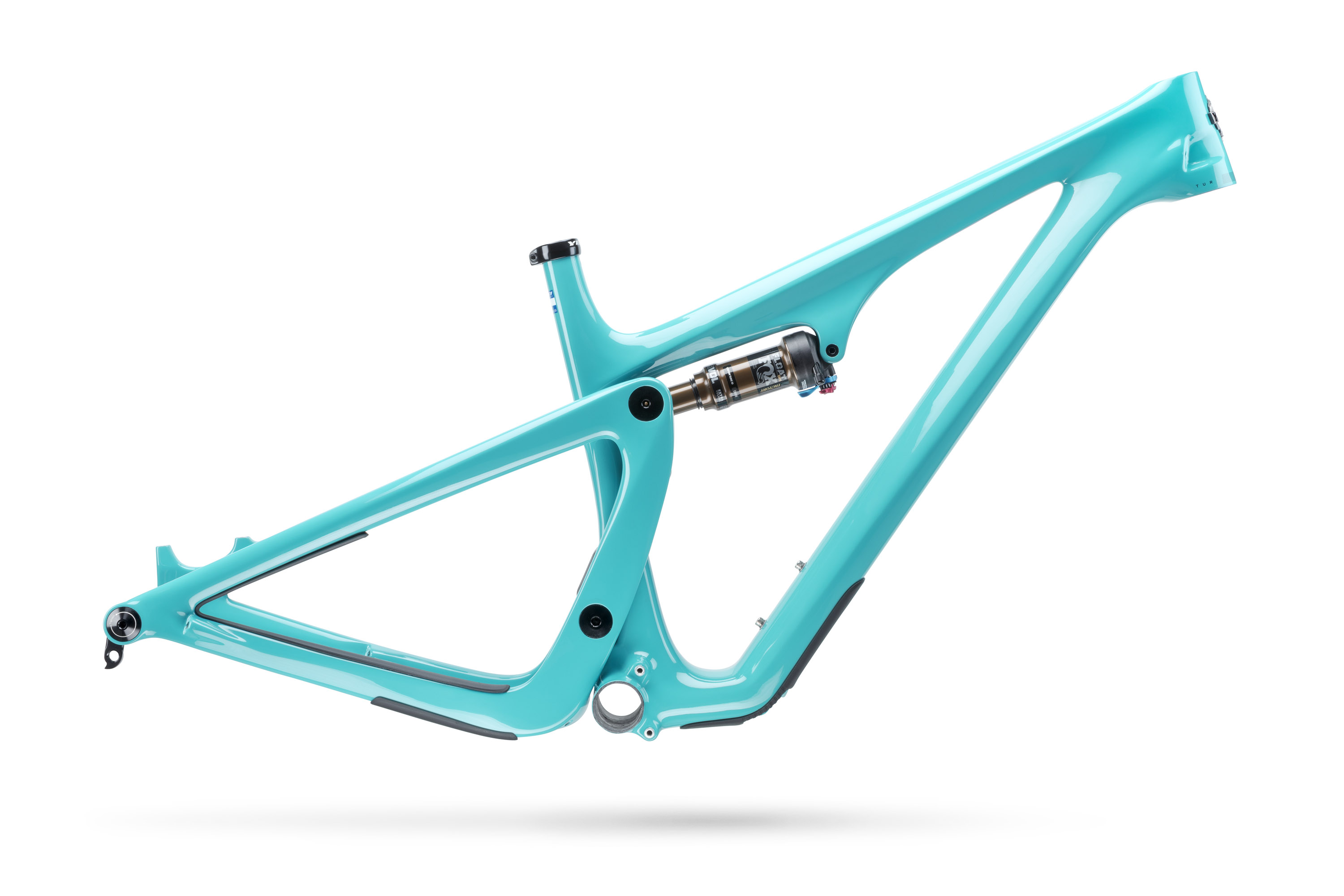 The special Yeti suspension feel comes from pairing the rear shock with Yeti’s Switch Infinity, a translating pivot that switches directions as you use more of your rear suspension to give the bike’s travel a bottomless feel.

Riding this bike, and most Yetis, you’re spending most of your time in the top to mid part of travel, and saving the end of the stroke for big hits. So the support doesn’t feel as poppy as some other shock designs, but when you do knock the rubber ring off the shock shaft, you won’t bottom out.

As you get deeper into your travel, the Switch Infinity changes directions and moves down, not up. That drops the anti-squat dramatically by decoupling the chain forces on the suspension, which lets the suspension work more efficiently to absorb impacts.

Yeah, yeah, yeah — translation: Yeti’s got your back and your landing. And when you don’t quite nail your landing, more often than not, Yeti’s suspension will save you.

One thing we appreciated about the SB115 and all Yeti bikes is that the company provides detailed rider weight-specific recommended settings for front and rear compression and rebound, as well as tire and shock air pressures.

The numbers are starting points. They help this bike ride great from the moment you roll it out the door of your shop, with plenty of adjustment points to customize the feel as you get to know it better.

With the SB115 release, Yeti upgrades the SB100 with threaded Switch Infinity suspension. It also introduces a new measurement in its geometry charts, vertical fork travel, which indicates how much actual up-and-down movement a fork yields.

In the past, Yeti has been accused of over-forking its bikes. This number asserts that Yeti’s fork specs are spot on. Because while rear wheel travel is a vertical measurement, front travel is not, due to a bike’s head angle. In the SB115, vertical fork travel is 120.2.

My only beef with the SB115 is the rear tire. As an east coast rider, I am annoyed when the first thing I have to do to my new $7,000 bike is spend another $70 to swap rubber.

Yeti specs a Maxxis Minion DHF 2.5 front and a Maxxis Aggressor rear. The Aggressor is great for Rockies and West Coast riding. In the east, it slips and slides. I immediately swapped it for a Vittoria Mazza. A Maxxis DHRII would be another good choice. Both are appropriate for how and where I ride.

I suspect Yeti didn’t go to the bigger, heavier tire on the SB115 because it adds significant weight. That is one of the first specs riders look at. Put on tires to match your ride style, and this bike won’t hold you back. 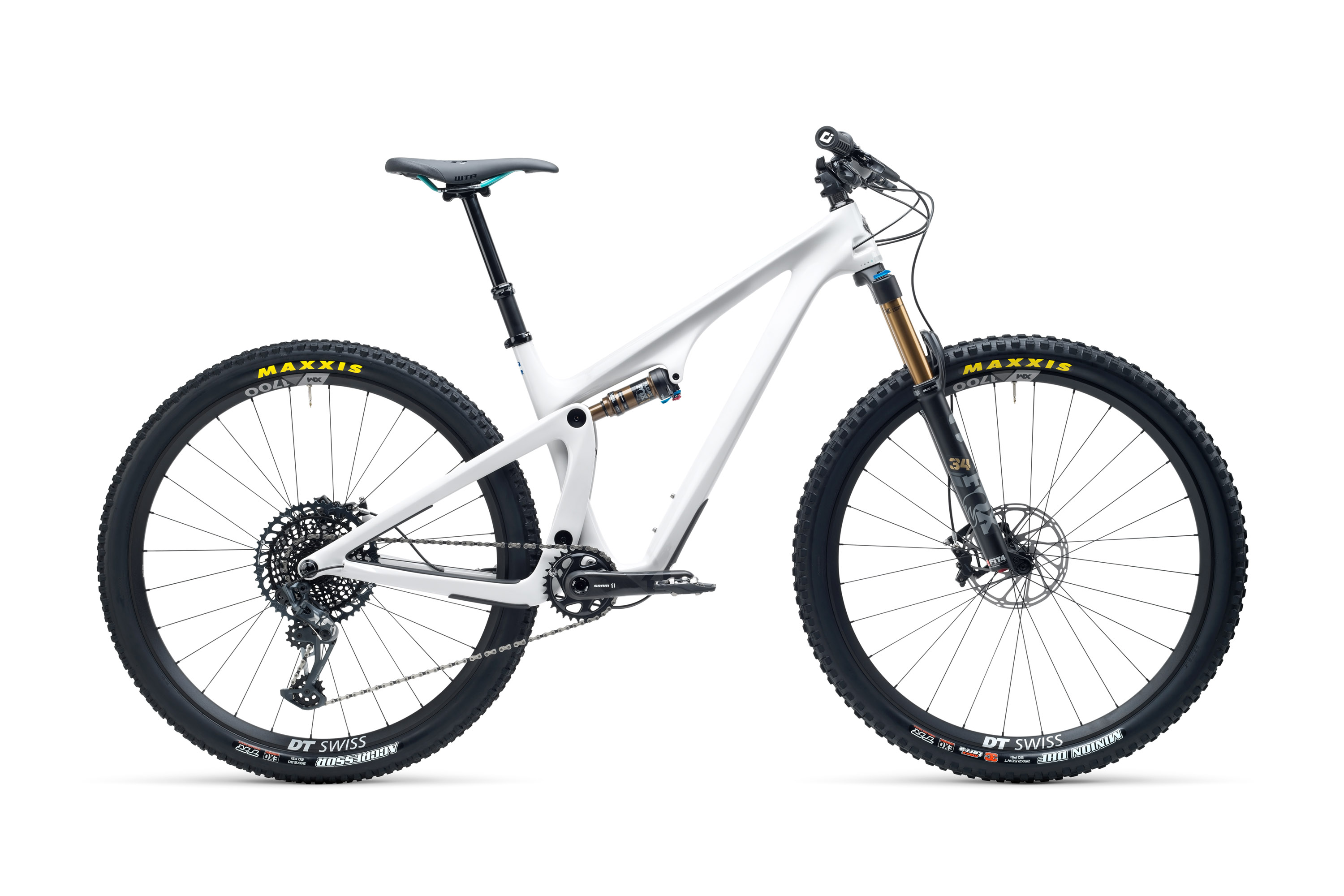 It’s also one of the cleanest-looking bikes on the market. Tube-in-tube technology keeps cables out of sight inside the frame, except at the handlebar and where they pop out underneath the bottom bracket for a hot second. And there aren’t extra mounting points for tools, racks, or bags. Yeti likes to keep their frames sleek and clean.

Like all Yetis, the harder you ride this bike, the more it gives back. The SB115 specifically hits a sweet spot. It really is one bike that can do it all, without sacrifice or compromise.

Up Next: Ride the Saddle, Not the Couch: Tips to Get Kids Outside

Saving…
Ride the Saddle, Not the Couch: Tips to Get Kids Outside
Bikepacking Gear: 10 Essentials for an Epic Ride
×