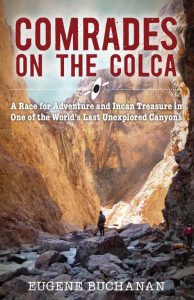 Mummy-filled caves and ‘skin-bubbling’ plants were some of the ‘attractions’ discovered during two rivaling expeditions’ race to the bottom of one of Earth’s last unexplored canyons.

In his new book Comrades on the Colca (a follow-up to his popular Brothers on the Bashkas), renowned journalist and paddler Eugene Buchanan recounts a hair-raising race down the upper Cruz del Condor section of Peru’s Colca Canyon, the deepest gorge in the world, between his team of Polish explorers and another Polish group in 2008.

An expert first-person narrative, rife with adventure and tales of lost Incan artifacts, makes for a riveting tale of ambition, peril, and discovery. We received an early peek at Comrades Of The Colca, released this month.

Excerpt by Eugene Buchanan; published with permission of the author and Conundrum Press.

IT’S ONLY DAY TWO, and our progress is painfully slow hauling our gear up, down, and around obstructions and back and forth across the river. Doing the math to break up the drudgery, I become acutely aware that we’re not on pace to finish the canyon in our rations’ allotted time frame. At this rate, we’ll run out of food way before we run out of canyon.

While I’m out ahead of the group scouting what lurks below, another abrupt horizon line—usually a sign of a hidden cataract—I discover something else: we’re not only in a race against dwindling rations, but against a rival group.

Climbing out of my boat at the end of a long pool, I scramble over a boulder and poke my head over a rock-strewn cascade leading further into the abyss. The water has separated into different channels like multiple strands of hair. There, toward the bottom of farthest channel on the left, three helmeted heads pop up over a rock, heading my direction. I rub my eyes. I can’t be that sleep-deprived. Then, like a sailboat coming into view after seeing its mast on the horizon, the helmets’ bodies slowly appear. Whoever they are, they appear to be making their way not downstream but back upstream.

And they look prepared—more so than us. They’re clad in full wetsuits and, unlike everyone on our team except me, they also have lifejackets. On their backs are huge, overstuffed backpacks draped with climbing ropes, carabiners, webbing, and other canyoneering gear.

I’m more dumbstruck than startled. Unless those coca leaves José had me chewing were hallucinogenic, there’s another group down here. That usually doesn’t happen on a first descent.

I yell out a greeting as soon as they’re within earshot. We’re on a first descent down the deepest canyon in the world and it feels the civilized thing to do. They grumble some sort of response that doesn’t seem overly friendly. But I recognize the accent immediately. It’s the same one I’m surrounded with on our trip. I’d bet my tea bag for the evening that it’s Polish.

I yell across the boulders again and ask in English if they know Yurek. Another grunt, then they continue on their way, passing me on a corridor of giant boulders about thirty yards away. I turn and watch them disappear over the horizon line above me. Scrambling back up for a better vantage, I see the rest of our group making their way along the opposite shore. The new group passes them without much conversation, save for exchanging a few words in Polish.

There are no high-fives, backslaps or other signs of cordiality. It seems that if there are two groups suffering down here concurrently, much less from the same place so far from home, they should have something to say to each other.

Soon they disappear around the next bend upstream, strangers into the night. When Yurek finally catches up to me in the boulder field, I ask him who the hell they are. My accent-based assumption is right. They, too, are Poles. One of their members is sick and two others are hiking him out back upstream before it becomes too late for them to backtrack. Five other members of their party are still downstream ahead of us, continuing down the canyon. They’re trying to pluck the exploration plum from under our noses.

I’ve found myself in a Polish Race to the Bottom of the Earth.

This excerpt is published with permission of the author and Conundrum Press.