An unlikely crew of scientists, artists, educators, and river lovers recreate a legendary river adventure to see how climate change and human development have changed things.

In 1869, John Wesley Powell, an American explorer, took off on a historic adventure. He and a company of men loaded up in dories and shoved off from Green River, Wyoming. The group wouldn’t be the first to explore the Green and Colorado Rivers, but they would be the first to float them in their entirety.

One hundred years later, in “A River Out of Time,” a bunch of people load up in rubber river rafts, charting the same course as Powell. But, things are drastically different this time. Not just because of all the human expansion and development, but because climate change is having a serious effect on these once-bountiful bodies of water.

Which is what this group of scientists, artists, educators, and river lovers is there to document.

“Dropping into this trip, I mean, it’s completely different from what Powell experienced,” says Ben Kraushaar in “A River Out of Time.” He noted as an example, “Right now we’re on a reservoir which wasn’t here when Powell rode this.”

Dams, reservoirs, farmland irrigation, and climate change have all stymied or siphoned off much of the water that used to run from Wyoming, down the Green and Colorado Rivers, all the way to the Pacific Ocean. Human demand is stretching the rivers’ ability to supply the water we need — especially in the face of climate change.

“A River Out of Time” follows this group along their journey to recreate Powell’s trip. And it illustrates just how much pressure our rivers are under and what needs to shift if we want those waterways to survive. 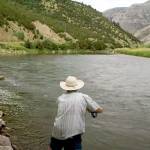 'Tribal Waters': A Fight for Sustainability in the Wind River Wilderness

A new video from Patagonia traces the troubled history of the Wind River and its profound importance to several Native American tribes.  Read more…