Perfect surfable waves every two minutes, all day long… that is reality at a one-of-a-kind venue in the hill country outside Austin, Texas. 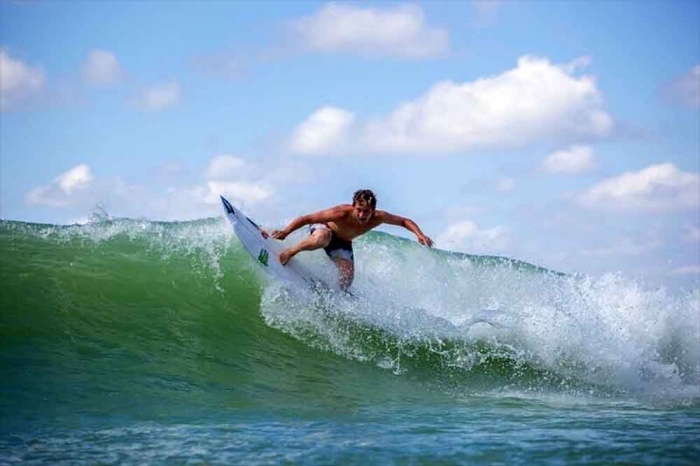 Sun beats down on the lagoon. A pier stretches into the distance, wood decking and rails above still water. Below, the surfers float and wait for a wave.

I am on the outskirts of Austin, squinting through repressive Texas heat. It’s July at NLand, a wave-making venue unlike anything else in America.

The wave machine comes to life with a shudder under the pier and a low humming. Now it appears: A wall of water, energy incarnate, pyramidal and breaking, with surfers paddling to hop on for the ride.

NLand opened last year. Its founder and CEO, Doug Coors, believes the park is a look into the future of the sport. “It’s analogous to a climbing gym,” he said. “The environment is contained and the sport is distilled to its essence, allowing anyone to practice and learn.”

Indeed, in one afternoon at NLand I caught more waves than I would manage surfing the ocean. The setting offers a concentrated experience, a wave every two minutes, where you can learn and progress.

Spain-based Wavegarden provided the technology for Coors’ ersatz ocean. The water-moving unit looks like a submerged snowplow. A cable pulls it back and forth across the lagoon to create a wave-on-demand venue tuned for advanced and beginner surfers alike.

Working with filmmaker Joshua Van Patter, I went to Texas to create a production on the NLand experience, a part of GearJunkie’s “Great Urban Outdoors” series, sponsored by YETI. The “future of surfing” angle intrigued me since I first heard of WaveGarden in 2013.

Consistent, contained waves have long been a holy grail in surfing circles. Wave pools and “standing wave” machines have existed for decades. But a technology that mimics long-breaking ocean waves never came to the mainstream.

WaveGarden, based in Spain, cracked the code with a proprietary, complex product. From its headquarters, the engineer-surfers who founded the company experimented for years.

One WaveGarden employee came from Spain full time to oversee NLand’s launch. Ion Eizaguirre now lives in Austin, on leave from his home country and far from any ocean.

Eizaguirre talked for our film about the challenges and the rewards of NLand. Water is filtered and controlled. Windy days reshape the waves, but the staff can fine tune the shape of the break.

Computer programs work with the sprawling, multipart WaveGarden product. NLand keeps its control room locked, but anyone can see the pumps, cables, counterweights, and supine latticed structure stretching across the lagoon.

A massive submerged foil moves water to make the wave. It’s the heart of the system, building a breaking wall of water as it moves down a track.

The shape and design of the lagoon are critical. NLand excavated earth to make its massive venue. The lined lagoon holds millions of gallons of rainwater collected on the 160-acre property. It is bio-filtered in a pond and stored in a nearby reservoir.

It’s a strange site from above, a mirage of water and wave. The surfable body sprawls 14 acres, a massive rectangle amid the cattle and dry sprawl past the Austin airport.

Surfers stream in and out for sessions in the water. When full, a couple-dozen aspirants bob on boards, waiting for a wave that boosts high, curling near the pier and breaking as a gigantic V outward toward shore.

Catch it right and you can shred for half-a-minute or more, surfing the whole length of the lagoon. It’s a bona fide ride, a wave you’d remember for a long time if caught in the ocean.

I paddled out to try the NLand experience one afternoon. A beginner surfer, I took a 12-foot foam board and got in line.

Lifeguards in the water shout instructions as the machine cranks on. The wave comes fast, breaking tallest near the pier. You look back, watch the water build, then paddle hard to catch a ride.

The first wave pummeled me. A caught edge or misplaced foot, and I was submerged and swirling — the power of the water is real.

I watched as more qualified surfers floated ahead. The wave petered out a few hundred feet beyond, and I swam back to position.

The foil runs in two directions, a wave generated both ways across the lagoon. You prep in formation, spacing out like in the ocean though tighter than when I have surfed. 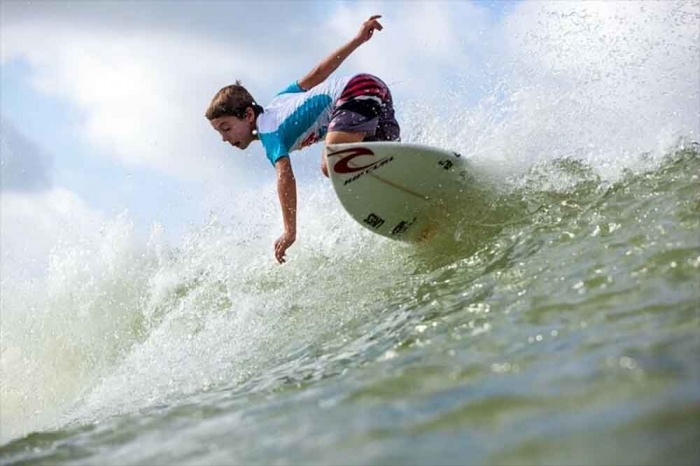 Energy builds behind me. I paddle and look ahead as bubbles and foam take over the board. A pop, and I am standing. NLand’s wave pushes my surfboard, floating fast on Texas raindrops toward a far, sandy shore.

This article is part of ‘The Great Urban Outdoors’ series sponsored by YETI. Learn more about its Rambler Jugs and other new products here.

Up Next: Watch What Happens When Surfers Put Floating Dock In Ocean