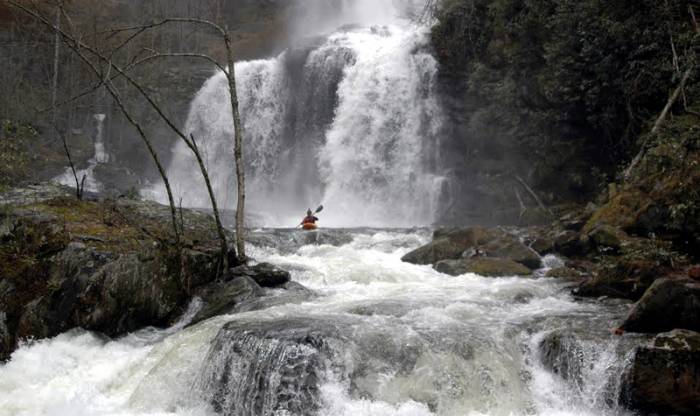 Whitewater fans rejoice: There’s one less dam in the mountains of North Carolina. This spring, river advocates and paddlers saw firsthand a decade-long effort materialize into rushing whitewater with a section of the Tuckasegee River again flowing natural and free.

Turbines and concrete still control the Tuckasegee upstream. But a stretch of the river near Cullowhee, N.C., that was dry for more than 80 years now runs thanks to an effort spearheaded by American Whitewater.

The full story of the dam’s destruction, including a drawn-out legal and political process, is a case study in the issues faced when a group works to return a river to its original state.

Across America dam removal campaigns are a nexus where environmental and recreational concerns meet. In North Carolina, the Dillsboro project netted not only new whitewater for boaters but it also reinstated habitat for fish and aquatic species held out by the defunct dam.

“I wish I could say these dam removals happen all the time,” said Mark Singleton, executive director of American Whitewater. “Truth is, they don’t happen enough.”

The organization has worked on projects to remove 13 dams nationwide since 2003. It’s a process that can involve Federal agencies, big business, land owners, and local town halls. With support from both KEEN’s Hybrid.Care giving program and the Conservation Alliance, American Whitewater succeeded in its campaign to have the Dillsboro Dam removed in 2010. It took three more years to implement a flow agreement for water in a class IV headwater segment above the dam.

This spring people are paddling a new section of river that had been dewatered for the bypass reach. “The quality of whitewater is very good,” said Singleton. “It adds advanced paddling in the summer months when local creeks are usually dry.”

Scheduled water releases happen seven times a year and are controlled by Duke Energy, which manages dams further up the Tuckasegee. Singleton said the releases add to the diversity of adventure-based tourism in the region. Dillsboro Dam being demolished in 2010

The dam removal, Singleton said, opened an area previously dewatered as flows were diverted into a penstock for hydropower generation. The area was inaccessible to hikers. Now, there’s a new trail with kayak put-ins and fishing access.

On the conservation side, the demolition has resulted in a “rebirth” of a section of the river, according to U.S. Fish & Wildlife Service biologist Mark Cantrell. He was interviewed in the Smoky Mountain News, which published a report citing “a growing number of aquatic species, from mussels to insects to fish” as the river habitat has been restored. This latest victory comes at a time of increasing pressure on North American rivers for hydroelectric power, irrigation and industry.

As a 5,900-member organization, American Whitewater advocates for both recreational and environmental river issues. The group is working on more than 100 projects across the United States this year.

“American Whitewater was one of our founding Hybrid.Care partners,” said Kirsten Blackburn, brand marketing coordinator at KEEN and co-manager of the Hybrid.Care program. “They do a great job of balancing recreational opportunities with conservation initiatives. We’ve been a proud supporter for almost a decade.”

With a solid membership and strong industry support, American Whitewater’s success on the Tuckasegee is evidence that with determination even dammed rivers can once again flow free.