Home » Camper & RV » How to Share an Airstream: One Co-Owner Breaks It Down

Want to own an Airstream, camper, or RV but don’t need one full time? One co-owner explains the advantages of sharing the storage, time, and costs of a camper. 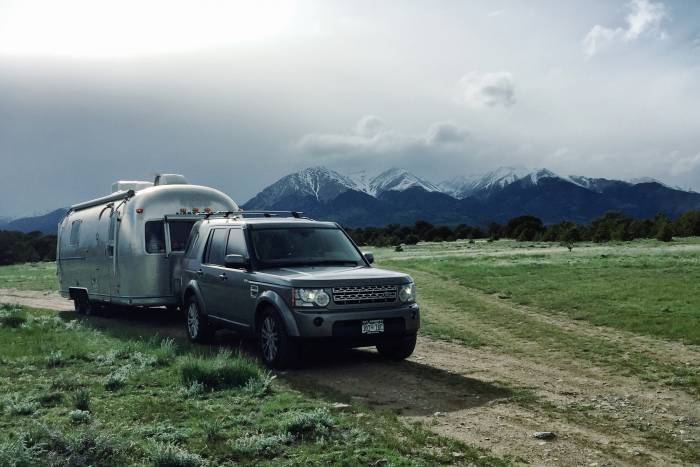 But between busy days at a digital company, Price also likes road tripping, camping, and spending time outside with his family. He’s fulfilled many of those life-crunched desires by sharing an Airstream.

Years ago, Price bought an Airstream for half off thanks to another family going in for the other half.

GearJunkie caught up with Price to learn a little more about how — and why — an “Air Share” works for him.

GearJunkie: How did you decide to share an Airstream? 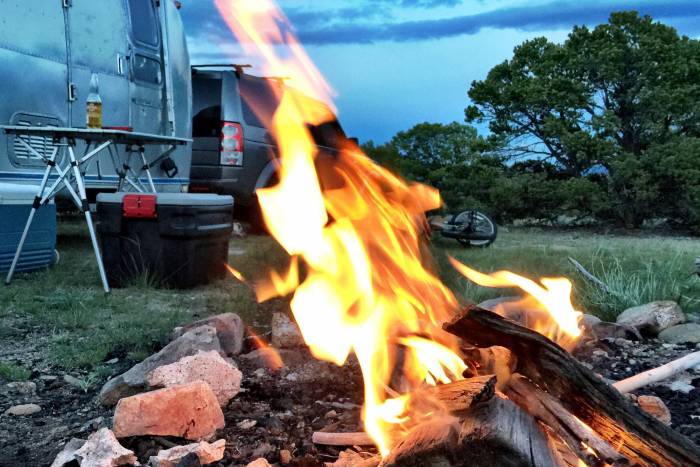 Andrew Price: I’ve always been a little more of a purist — a tent guy, you could say. I never saw myself with a bulky trailer or RV. But one year, we went camping with a bunch of families in spring. We arrived first, and I set up our tent. Then I watched friends roll in with popup trailers and set up these canvas and aluminum palaces.

Over the course of the really chilly weekend, I realized the value in structured living spaces with propane heaters and kitchen areas. Now, my mind was open to the idea.

Shortly after my awakening, my good friend came across an opportunity we couldn’t say no to. He knew this guy with an old Airstream and had been prying him for about a year to sell it. The owner finally folded. We purchased Louise, the camper, for $10,000 all-in and split it 50/50.

How do you share it fairly with the other family? 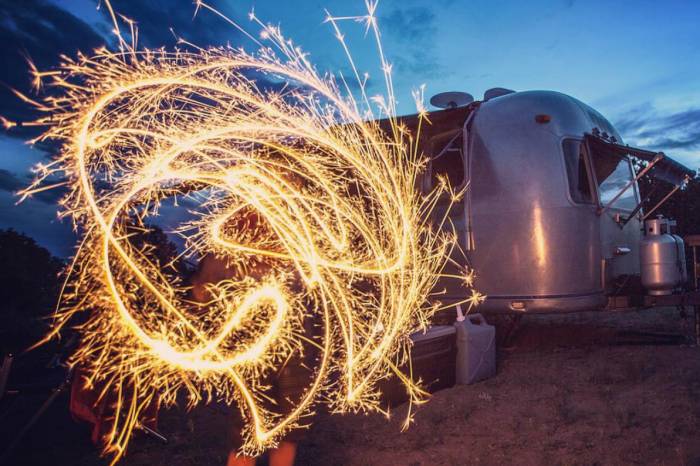 Our Airstream co-owners are close friends. We’re lucky in that way. We share similar outdoor aspirations, and our families often ski and mountain bike together. We discussed the idea of a shared trailer because neither family felt like they’d be using it all the time, and the cost is not trivial if you just want to “try it.”

The key is doing this with someone you trust. An Airstream is big, unruly, and finicky to keep in working shape. If there’s a new ding after a trip, or a cabinet door falls off, it’s important you trust that the other owner treats it the same as you and would be willing to chalk up the repair with a shit-happens attitude.

How does sharing registration, insurance, and maintenance work? 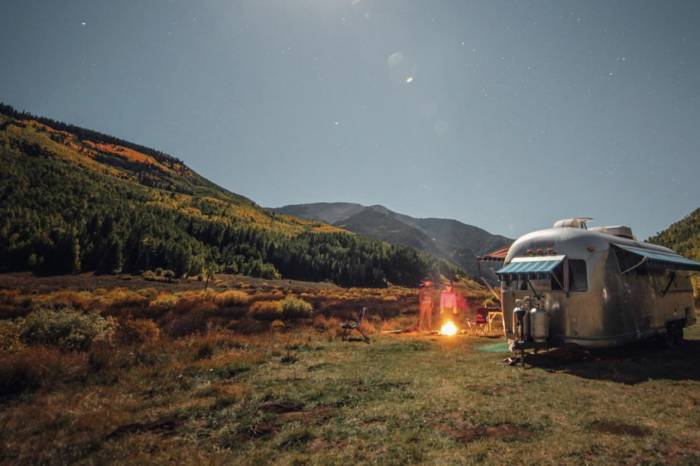 For our situation, it was just easier to put title, registration, and insurance all under our co-owner’s name. It is an old rig, and it’s a recreational vehicle that we use fairly sparingly, so insurance is relatively inexpensive. We settle that expense grouped with other repair costs at the end of the summer.

However using my insurance to cover my own liability issues could be challenging, so I have a small policy of my own to cover that risk.

For repair and maintenance expenses, being old friends, we operate on the honor system. There’s a lot of nickel-and-dime stuff we just take care of on our own. But for bigger things like new tires or batteries, we keep a shared spreadsheet and settle up once a year. I have a nice setup for storage, so we try to split up ownership stuff like that.

We do not have legal documentation established between us as owners. While we all love the Airstream, it’s not a marriage. 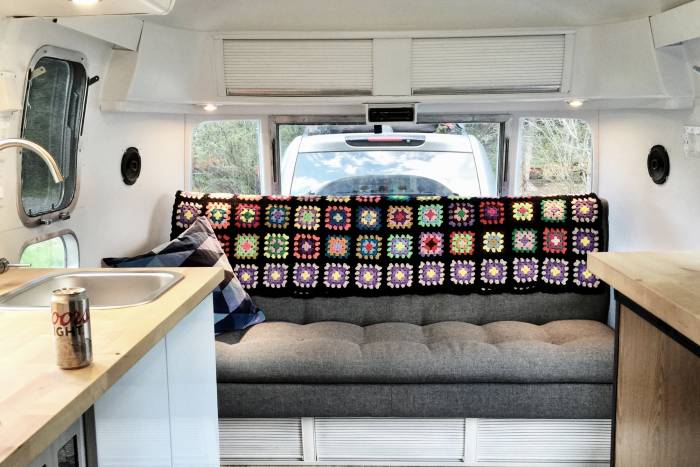 We’ve done some significant renovations to the interior, so, yes, we agree on what’s worth it and our design style. Luckily, we have similar tastes.

While Airstream is a master of manufacturing functional space, ours is from 1978. The original aesthetic was big, dark, and dated. So we took the front-end interior down to the floorboards and rebuilt the cabinetry, lighting, and color palette.

Now it has a more clean, modern, minimalist look with vintage accents. It feels aspirational even though it’s an old-school camper at heart.

What would happen in the event of a major repair?

That would be a major bummer, but it’s a reality. However, with sharing, it actually makes that decision a little easier.

Even if the expense is massive, you are still paying half of what you would be if you owned it outright, so that’s not so bad when you look at it that way.

What does the Airstream share let you do more of? 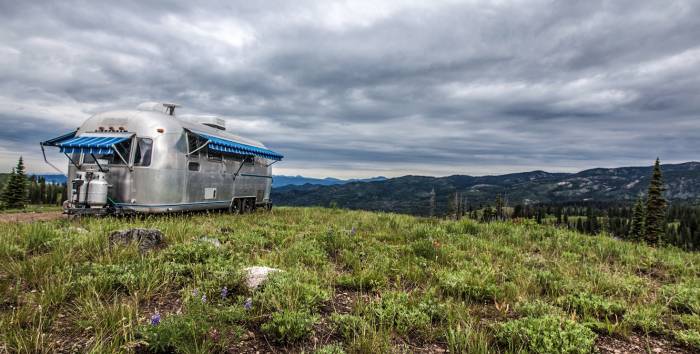 It makes getting out and exploring super accessible. We can plan trips out in detail or just roll out spontaneously.

Once we arrive at a destination, setup only takes a few minutes. It’s not a popup, so everything is in place. Often, it’s just a few coolers and chairs tossed out of the camper and we’re are good to go.

Plus, it’s secure and lockable when we leave camp — and a truly enjoyable to experience in a full-on downpour.

Favorite road trip in the Airstream? 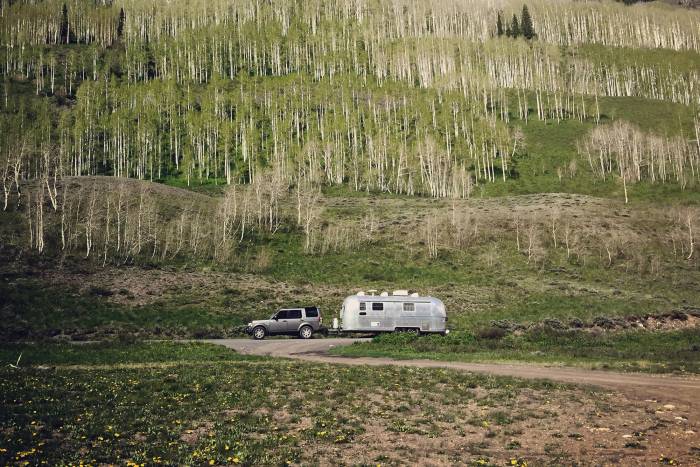 Fruita, Telluride, and Steamboat. We tend to take Louise to explore Colorado on extended weekends — about four to five trips a year. The other family uses her less but they go big when they do. They’ve hauled Louise to Crater Lake, Glacier National Park, and Yosemite, among other destinations.

Really, the more remote the better. It boondocks incredibly well, so I always love the looks and discussions we encounter when people come across us camping off the beaten path. Honestly, any trip fits into the Airstream lifestyle. She’s vintage rolling Americana, and you won’t find a person who doesn’t smile when they see her.

Does sharing work for you? 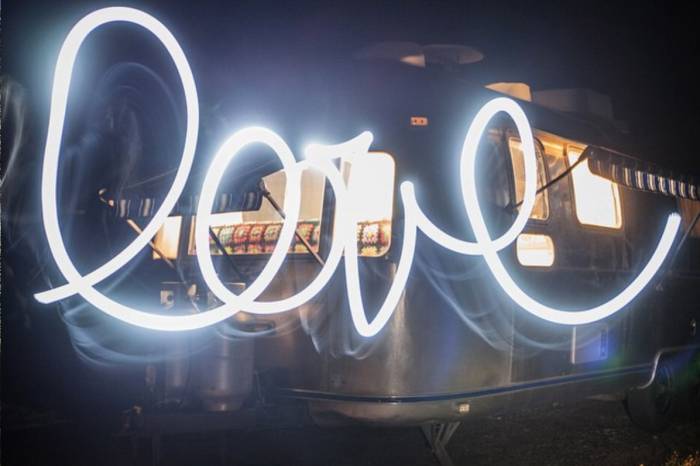 The sharing idea works perfect for us. As much as we both wish we could, neither family is going to use the Airstream every weekend.

It allows us to both make memories in a way that feels super unique. And we can do that without the burden of the cost. Going Dutch on expenses with no real conflicts on the sharing schedule has made this an extremely enjoyable endeavor.

Good things come to an end. What if one of you decides to sell?

Honestly, that would be a challenging conversation. Both families have a real affection for Louise, so if we are having this conversation, something has gone wrong or a big change is occurring.

With the gravity of that in mind, one party would just buy the other out. The value of the Airstream has increased since we bought it, so it would be easy to buy out the other partner for what we both have in it, minus the depreciation of costs spent on repairs.