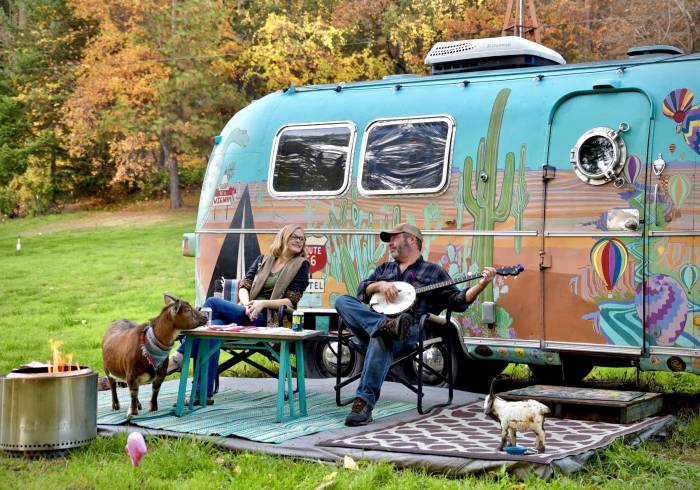 Everybody knows about van life — but what about goat life? A traveling Oregon couple and their goat step into the spotlight in a new Discovery series.

As a group of van-lifing goat-owners chat around a campfire in Discovery Channel’s new docu-series, they make their priorities very clear.

“Never trust a person who doesn’t like goats,” one of them says.

That’s the attitude of Cate and Chad Battles, an Oregon couple with a psychedelic Airstream and a beloved goat named Frankie. This unusual family has traveled together for more than 60,000 miles and through dozens of states. After the couple built an online presence through a goat-filled Instagram, Frankie really hit the big time last summer.

A talent scout approached the Battles about appearing on a new Discovery Channel series. Produced by Robert Downey Jr. and his wife, Susan Downey, “The Bond” explores human relationships with unlikely pets. That includes a cheetah, a dolphin, a kangaroo, and yes — a goat named Frankie.

For the Battle family, Frankie helped them through the grief of losing their dog Maggie. Now, “pretty much everything we do is centered around Frankie,” Cate says.

Hitting the Road With Frankie

Back in 2015, Cate and Chad lived in a house in Asheville, N.C., and owned a local bar. Feeling the itch to travel, they sold both, converted an Argosy Airstream, and took to the road with Maggie and Frankie in July 2016.

They’ve been traveling for several months of the year ever since. Initially, Cate and Chad worried about living on the road with a goat. Many people give up pets for a life change like this, but leaving behind their furry friend felt “unfathomable,” Cate said.

“We took a gamble on it. We couldn’t leave our kid behind!” Cate said. “So we had to find a way to make it work.”

Eight-year-old Frankie isn’t a big goat. She’s a mix of pygmy and Nigerian dwarf that loves to travel and explore, Cate said.

“Goats are incredibly inquisitive,” she said. “Frankie is very adventurous. She really enjoys traveling as much as we do, especially in Oregon.”

When not traveling to off-grid, pet-friendly sites with Frankie, Cate, and Chad park their Airstream on a farm in Applegate Valley outside Grants Pass, Ore.

Chad and Cate may love their colorful odysseys with Frankie, but living with her also comes with challenges.

Since goats have a well-known tendency to eat and destroy just about anything, they can’t leave Frankie alone in their Airstream.

“She’d probably eat our trailer if we did that,” Cate said.

When arriving at a campsite, the first priority for Chad involves scoping out the area for trash. Frankie will find and eat it, so ensuring the campsite is free of cigarette butts and plastic is vital. Frankie sleeps in their bed, and she is — mostly — housebroken, Cate said.

If the couple wants to hike a trail where pets aren’t allowed, they go alone and take turns caring for Frankie. But more often, the couple does “extra research” to find pet-friendly places, like many National Forests.

However, the Battles got some welcome help during filming for “The Bond” last fall. Two “cool guys” from Austin, Texas, followed them for a month through Idaho, Montana, and the Oregon coast.

They would babysit Frankie sometimes, allowing Chad and Cate to go on hikes together, or scope out bumpy roads.

“The way we roll is typically away from towns and cities and people,” Cate said. It was a unique experience to have other people with us … Nothing was really staged at all.”

The Battles have taken Frankie to about 25 states now, and have made “thousands, if not millions” of great memories together, Cate said.

A painter and photographer, Cate runs a studio based in Oregon, and Chad manages a beer draft cleaning business. They both work hard to support their traveling, she said. Asked about their growing online following, Cate said, “People just really love it.”

“You don’t have to have a lot of money. You don’t need a lot of things. We live simply and we get the most out of life,” Cate said.

The Battles would eventually like to buy property in Southern Oregon and fill it with animals. However, Cate also said she’s not quite done with traveling around the country.

But would the Battles have more goats after Frankie?

“We plan to have many more,” Cate said. 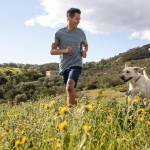 Pooped Pup? Purina at PetSmart Wants to Up Your Running Dog's Endurance

Certain dogs make great trail running companions, but they need to ease into it. Help your dog build up their endurance and energy with these training and nutrition tips. Read more…