Andrew Muse had a dream to build a traveling adventure home. So he bought a 40-year-old Dynacruiser truck camper, rolled up his sleeves and got to work stripping the shell and rebuilding it from the ground up.

Fortunately for us, he also made a great time-lapse video of the project, which he says he expected to take 2-3 weeks and cost $500-$600 to complete.

A great video and a cool finished product is the result of his effort. His full report about the project is below. 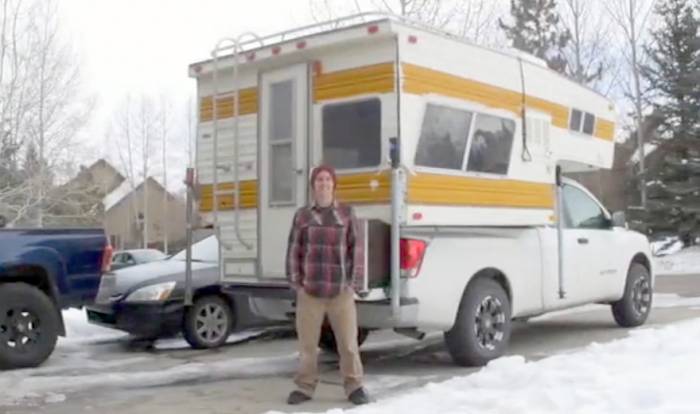 I have never been more dedicated and passionate about a project. I have always had a dream about living in a small log cabin with my dog, a guitar and some books somewhere high up in the mountains. Three months ago a made a step in that direction. I bought a 1976 dynacruiser truck camper. It was in phenomenal condition being that it is almost 40 years old. I purchased it from a gentleman in northern Utah for $500. He was clearly a good ole’ Mormon man, 70 years old, a fire fighter his whole life who lived on a small farm in a nice log home he had built himself. He was selling the camper because he had purchased a new more up-to-date model. It was honestly heart breaking buying the thing from him because He was borderline in tears letting it go. I assured him it would be going to a good home.

I spend the last few month working in this beast with all of my free time… I mean all of it. I was in the camper by 8:30 every morning and working till 11 every night possible. I was full-on obsessed. With over 400GB of footage here is the edit. 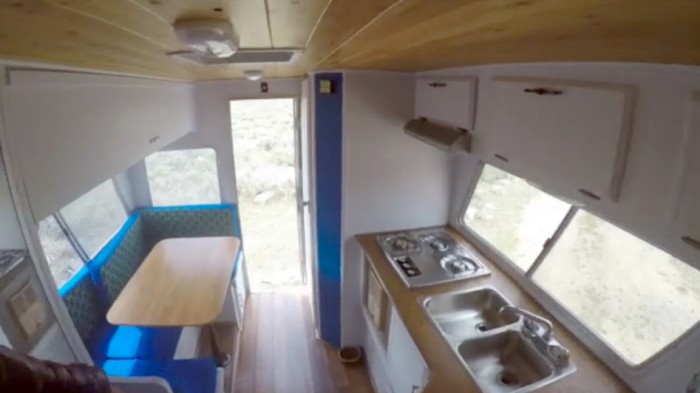 I started by removing one of the cabinets at the entryway to the bedroom and re-attached it inline with the rest of the cabinetry. This opened up the bed area nicely allowing a lot more light into the rest of the cabin. I also rebuilt the shelving over the dining area. It used to be a three-section shelf that rolled out into a small bed. Now it is designated kite storage.

Next was the ceiling/solar mount. After spending several hours pealing away the flaking vinyl and to paint over the existing wood, I came to realize that it was going to look terrible and I needed to address/reinforce some rotten wood and set the mounts for my Goal Zero solar setup. I found some super light/affordable cedar tongue and groove which smelled amazing. I spent a few days staining. I have never worked with T and G but I went for it. The installation went pretty smooth and came out amazing! With the ceiling not being flat the T and G was able to bend to the contour and made a really cool wave in the ceiling.

I have always had a strong fascination with solar, so got in contact with Goal Zero (a company that makes portable solar panels and also has a badass mission statement: “Goal Zero’s mission is to empower people because we believe in human potential”). I use a bunch of their products for filming in the backcountry and have really loved everything they make so far so I inquired about there larger solar options. I ended going with 2 Boulder 90s (90 Watt solar panel) and their Yeti 400 (Solar storage/power conditioner with outlets) This whole setup runs about $1500

After that I prepped, primed and painted everything. Adding some Magnetic primer to one section of wall and finishing with some chalk board paint, I went with a super light grey to allow more light to reflect throughout the cabin. I Installed all LED lighting fixtures to conserve energy.

Once painted, I installed some laminate hard wood flooring. This was my favorite part of the processes. It was super easy to install and came out amazing!

With the ceiling and floor done I trimmed everything out, which was honestly the most difficult part of the remodel. With nothing being square to begin with there was a lot of trial and error. Measure three times then Cut, Cut and recut. But once it was finished I had the tiny adventure home of my dreams!

I have put everything I have into this project with the hope of being able to live my dream lifestyle for as long as I can while documenting everything along the way.

Huge thank you to my good friends Ted St. Peter-Blair, Croshane Hillyard, John Duda, and Josh Heiner for the much needed extra hands and company along the way!