A new kind of form factor and integrated ‘pots’ that double as rocket-stove chimney walls make the to-be-released Jetpack unique. We got a scoop from the designer this week. 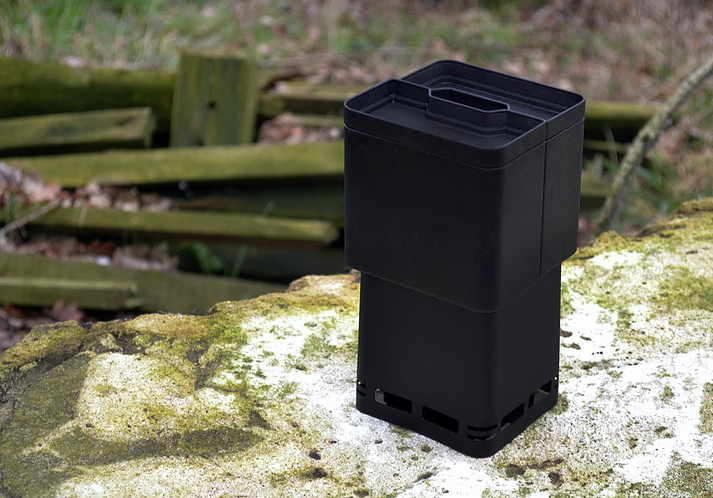 Two pots, two lids, and a stove base… that is the entirety of this box-shaped stove, which burns wood and gives a bare-bones alternative to food prep in the wild.

Using the Jetpack is as simple as tossing a handful of small, dry sticks and tinder into the base. Light it up and the stainless steel cube with ventilation holes serves as a rocket-stove platform, pulling air through as the fire burns to stoke the flame.

Two C-shaped “cups” (small cooking pots) slip atop the stove, forming a chimney that funnels a geyser of flame through the assembly’s center.

The cups, which come with matching lids, can then be filled with water for boiling, beans, broth, or whatever you want to cook.

According to Jetpack’s inventor Vincent Koenders, cook times are “similar to kitchen standards.” A boiled potato, he said, takes about 20 minutes.

Koenders’ 3-D-printed prototype is not a new concept – it works on the same principle as a Dakota smokeless fire pit or rocket stove. But the Jetpack’s unique modular, all-in-one design make it perhaps the most simple, portable and self-contained system yet.

Koenders is keeping some details secret until the project starts receiving production funding, but he said that, when fully assembled, the Jetpack stands one-foot tall and weighs around two pounds – pretty small for a portable kitchen with “pots” included.

This looks like a fun DIY experiment for your next camping trip. All you need is a drill, 1" bit and length of firewood. Read more…

There is no time table or price available for the Jetpack as Koenders finalizes patents and seeks funding. But he assured that once launched it would ship worldwide.

A designer and developer with a background in aeronautical engineering, Koenders is actively seeking support and feedback on his design on his Facebook page and website.

Saving…
Cast Iron ‘Field Skillet’ Raises $1.4 Million
How To: Choose A Cooler For The Outdoors
×