The last couple years have seen a boom of investment and innovation in hammock technology, perhaps the most critical piece of the “Just how comfortable can I be?” puzzle. Here are five you ought to know about. 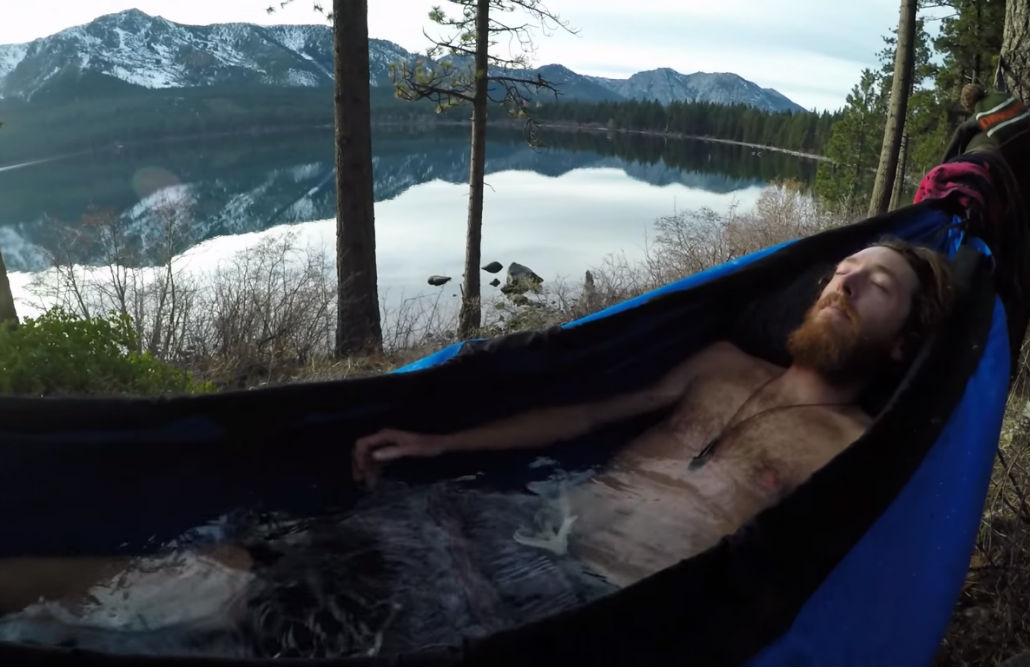 No, it’s not the latest online fantasy war game; the Hammocraft is the mother of all water-based, group lounging inventions. Granted, it’s probably a short list, but this is undeniably cool. The aluminum hammock frame seats up to five and fits onto various makes of raft, stand-up paddleboards, duckies, and drift boats. 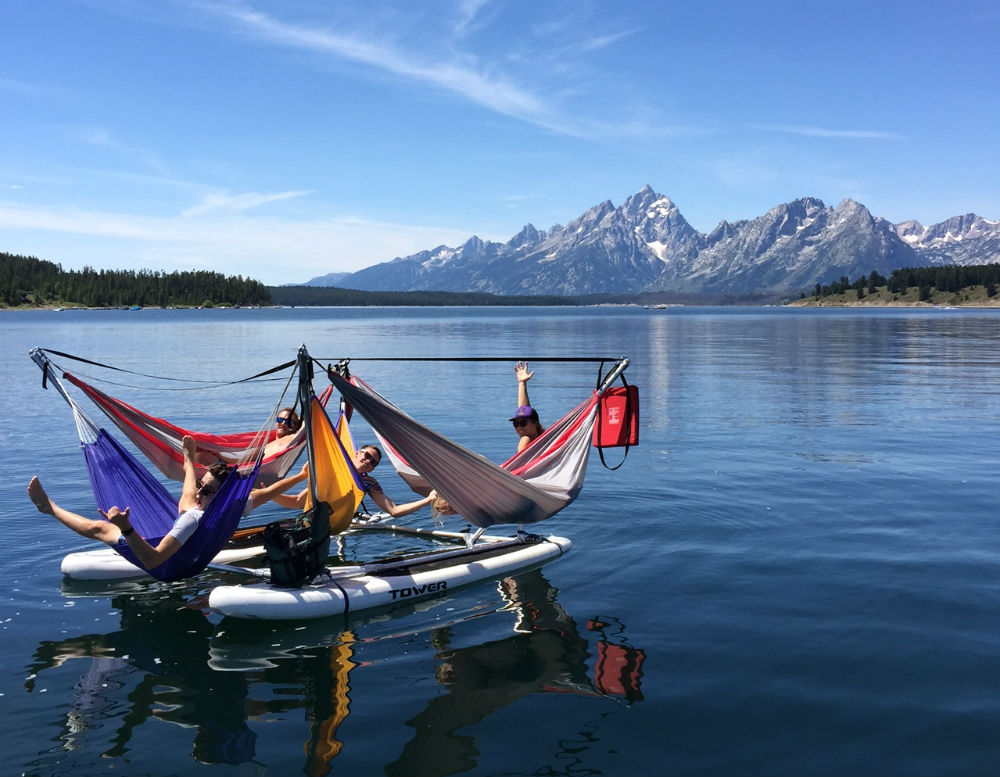 The Hammocraft also free-stands, so you can enjoy a land-based lake hammock.

For $1,000 – yes, really – you receive the frame alone (though the company has hammocks available for extra), which offers adjustable heights and quick disconnect for safety in the event of a “Hammocraft-tastrophe.”

At $200 per person, this could be a fun investment. We’d just like to see how you get in without tipping it over.

Keeping in line with the hammocks-belong-in-water theme, the Hydro Hammock offers you the option to be wet while you relax. 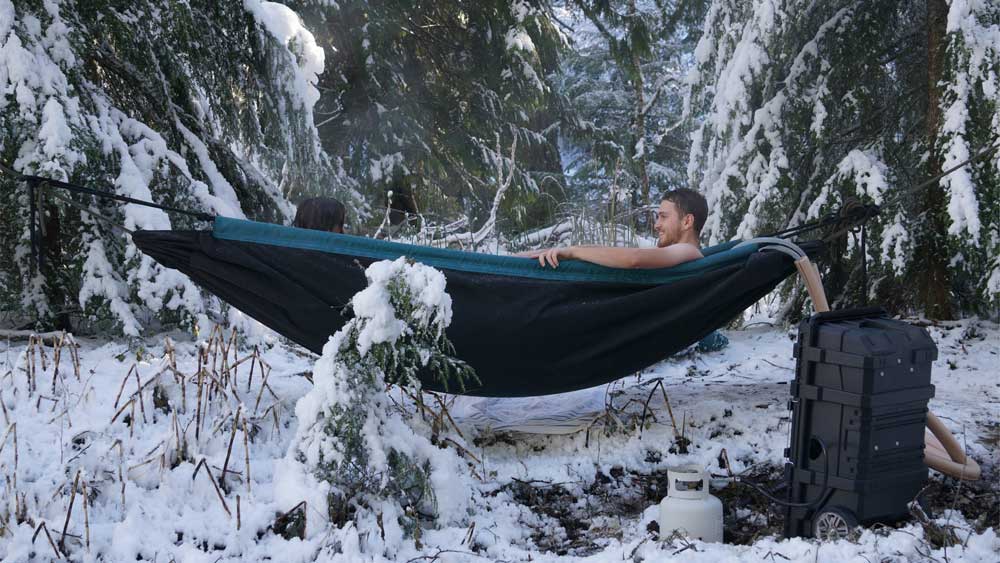 There was a time when waking up in a puddle meant you had a $300 waterbed repair to look forward to. But Hydro Hammock sells its customers on the dreamy idea of a hanging hot tub.

You Know You Want A 'Hot Tub Hammock'

Alone, they're just hammocks and hot tubs. Together, they form a 'bliss bath.' Read more…

We covered Hydro Hammock when it dropped last year, and while it sounds like the “bliss bath” it advertises, there are a few drawbacks: it costs $1,500, weighs 80 lbs., and holds up to 50 gallons of water that you have to fill and dump out when you’re done.

Who are we kidding? That’s a small price to pay for the luxury of nestling into a hanging broth of ultimate delight.

Here’s what the Fuut hammock, made by Korean manufacturer Connect Design, has going for it: it is by far the most affordable hammock on this list. Here’s the rub: it only fits one part of your body. The Fuut is for your Feet. 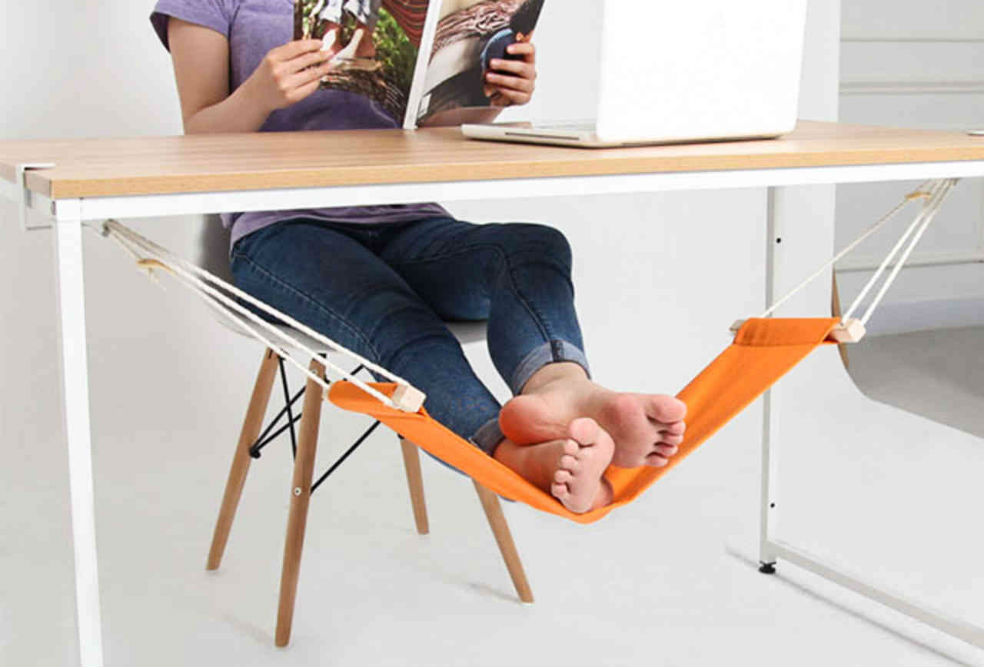 For $30, you can have a fraction of the overall comfort of a full hammock, but sitting at your desk, that’s better than nothing.

The simple canvas sheet measures six inches wide by two feet long and hangs from the underside of a desk or table. Its height is adjustable, so you can set the level of relaxation – high for the full kicked back feeling, or low for a just a little extra comfort.

This looks like the perfect gift for anyone who likes the task of building Ikea furniture and doesn’t have anything resembling a foot rest.

While we’re on the topic of workplace hammocks, we’d be remiss to leave out Schnap, the mother of all at-work loungers. 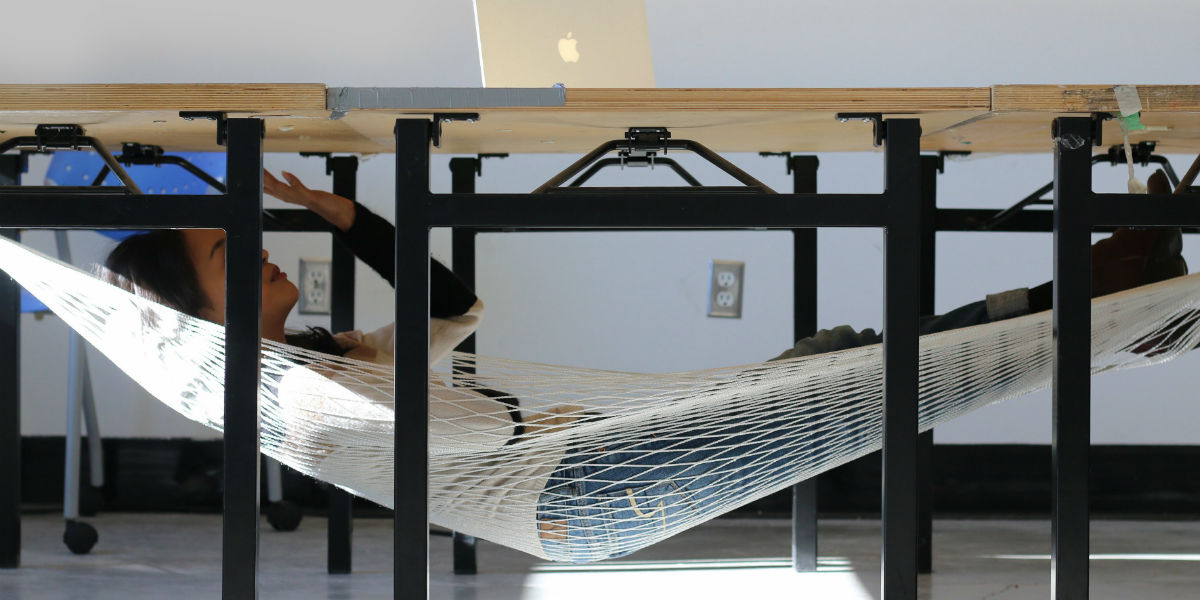 On the one hand, a full-body hammock that rests covertly under your desk is an ingenious way to catch some Zs in the middle of the work week. On the other hand, if you’ve worked so hard you immediately need a place to sleep, it might be time to consider a new career path.

Either way, Schnap has you covered, literally. Though there’s no official word on a release date or price, the Schnap looks like a simple concept: a couple c-clamps and an adjustable-length rope hammock that fits under a work table or large desk.

The Schnap’s inventor, Aqil Raharjo – a graphic design student at OCAD University in Toronto – came up with the concept for a class project after watching fellow students curl up under their desks, or plop face down on a table during long study sessions.

The Schnap is reportedly in a research and design phase to develop commercially.