Cook food with the sun — that’s the basic premise of GoSun Stove, a glass-and-aluminum contraption that looks like it landed from space. 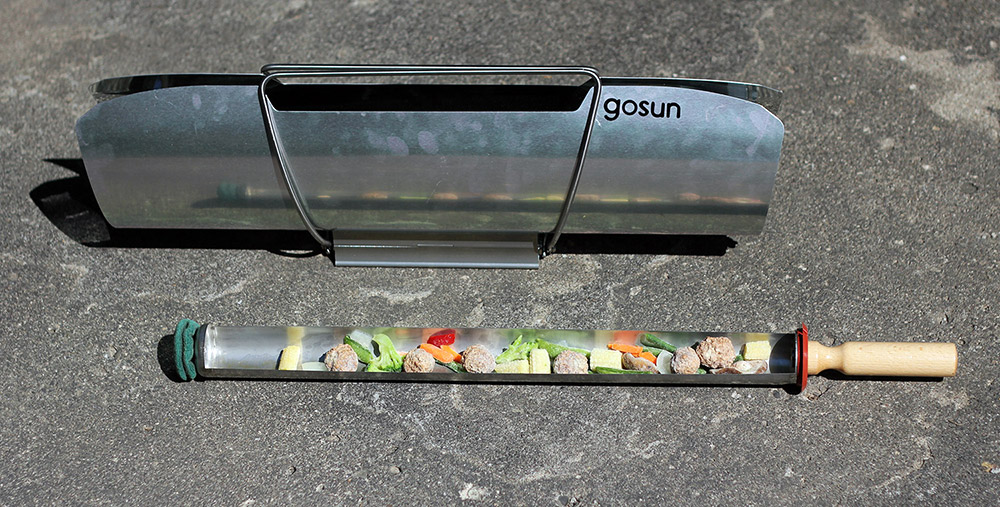 A sword-like cooking tray pulls out of a glass tube. Hot dogs, potatoes, eggs, muffins, stir fry, and more is baked inside.

I reheated strips of pizza in the GoSun this past weekend. Later, I put frozen meatballs and vegetables on the tray and set it in the sun. Twenty minutes of cooking time and the hash was steaming and hot, ready to eat.

No fuel is required. It doesn’t need batteries. Solar energy cooks the food.

Reflectors capture sunlight then focus it onto the unit’s “oven,” a two-layer vacuum vessel made of glass.

The company, based in Cincinnati, touts temps inside between 200 and 700 degrees.

After three cooked meals I was sold. For campers, the GoSun can replace a charcoal grill or a gas stove. The bigger picture sees the unit deployed to families in need around the globe.

Portable and simple to use, the unit will reduce the need for wood as fuel in the developing world. Using the free energy of the sun, the company has a greater mission of protecting forests and helping women who are burdened each day with cooking over smoky fires and gathering wood.

All you need is direct sun. I set the unit up on a June morning and tilted the reflecting panels to the east.

Rays bounced off the aluminum. The glass tube became hot inside.

I checked it 15 minutes later, pulling the tray out an inch, and steam escaped from my little oven in the sun.

GoSun says up to 90 percent of sunlight is “caught” in its stove’s footprint. The design relies on parabolic reflection and the greenhouse effect to create heat.

The vacuum between two layers of glass in the cooking tube keep ambient outside temperature from transferring into the oven.

You can cook in winter and summer. As long as the sun is up, the stove can work.

Cooking times vary greatly depending on food type and sun strength. We heated frozen corndogs one day in about 20 minutes in mid-May. The meatball and vegetable dish, as noted, was done in less than a half-hour.

The food was hot and cooked through, if a little soggy. The tube of glass traps moisture from the cooking, and it’s sealed so tight that almost no steam escaped.

Pull out the tray a smidge to make a steam gap. The cooking takes some trial and error, though it’s straightforward and much less messy than a gas grill.

The GoSun weighs about 3.5 pounds. It has handles, and the reflectors fold over the glass tube to protect during transport.

Around the globe, in developing nations, GoSun has a plan to give away stoves for free. The company is on a mission to make the world a little better via the power of the sun.

Saving…
‘Dual-Chamber’ Design: Best Camp Pad of 2015
Campers Vs. Glampers: Which Team You On?
×