The tent came in the mail. But when I pulled it out of the box, I was skeptical — could this tiny thing really work?

I was headed to the Brazilian Amazon to retrace Teddy Roosevelt’s first descent on the River of Doubt. Now officially named the Roosevelt River after the expedition, it remains a remote, wild stretch with more than 70 rapids.

Our team expected a lot of portaging through dense jungle, and we needed to pare down our gear. The 22oz tent by Sea To Summit, called the Specialist Solo, would save me significant weight during the 5-week trip.

In the woods behind my house I set it up. I was impressed by how easily it came together, including a nice tensioning system and other thoughtful details.

Sea To Summit makes good gear, so I decided to trust it and use the Specialist as my main shelter on the Rio Roosevelt Centennial Expedition.

Overall, I was impressed with how well the tent held up during our 5 weeks in the rainforest. The only downside was the lack of ventilation, which made the inside of the tent uncomfortably hot, but even a screen tent without a fly can feel too hot in the Amazon.

After returning to my home in Minnesota, I continued to use my tiny tent while guiding canoe trips in the Boundary Waters Canoe Area Wilderness. Sure it’s small, but I am basically only in my tent when I am sleeping.

I love the fact that the Specialist Solo is quick to set up, hardly takes up any space, and helps me keep my personal pack ultralight. I look forward to using this tent on more canoe trips in the Boundary Waters this summer and beyond.

Where To Test It: Rugged mountains, wild lakes and rivers with lots of portages, long trails, or ultralight bike tours. Basically places where every ounce you carry matters.

Who’s It For: Weight conscious backpackers, cyclists, paddlers and wilderness wanderers who want an extremely light and compact solo tent.

Set up and take down: Set up is pretty straightforward: After a few nights I could set up or take it down in a couple of minutes. The tent has four tiny poles sewn into the corners, and two collapsible poles that stand vertically on the inside. Pitching the tent is easy — just lay it out, stake the six guy lines, unzip the door, and insert the two collapsible poles into special holders to form the ridgeline.

After the poles are in place it is easy to fine-tune things with the guy line tensioning system. The Specialist Solo is a single-wall tent, which makes it a snap to pack up. 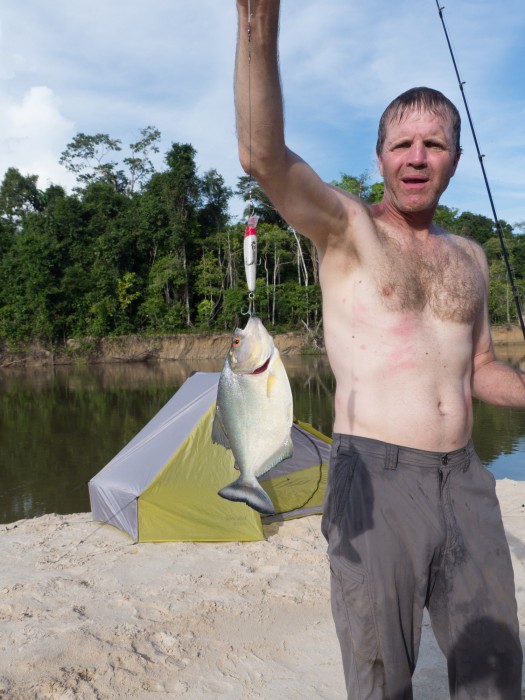 Poles: It comes with alloy poles but can be pitched with a pair of trekking poles to save mote weight. Leave the pegs behind, too, and use natural anchors if you’re trying to cut every gram.

Flaw: This shelter does not have enough ventilation for hot climates; in the Amazon it felt like a coffin some nights. But, as noted above, almost any tent was too hot on our trip. In heavy rain the foot of my sleeping bag often gets damp because it ends up making contact with the tent walls. Also, at $429 msrp this tiny tent does not come cheap.

Final Thoughts: I love having a tent that packs down to the size of a water bottle. It is easy to set up, and very well thought-out. The guy lines are reflective and super simple to adjust. All the details are in place on this simple, effective, single-wall design. I look forward to camping out in this solo shelter over this coming summer and beyond.

—Dave Freeman led an international team of paddlers on an expedition down the Rio Roosevelt in the Brazilian Amazon 100 years after Teddy Roosevelt’s first descent in 1914. Dave and his wife Amy Freeman were named National Geographic Adventurers of the Year in 2014.

Up Next: Made in USA: Gerber ‘StrongArm’ Survival Knife