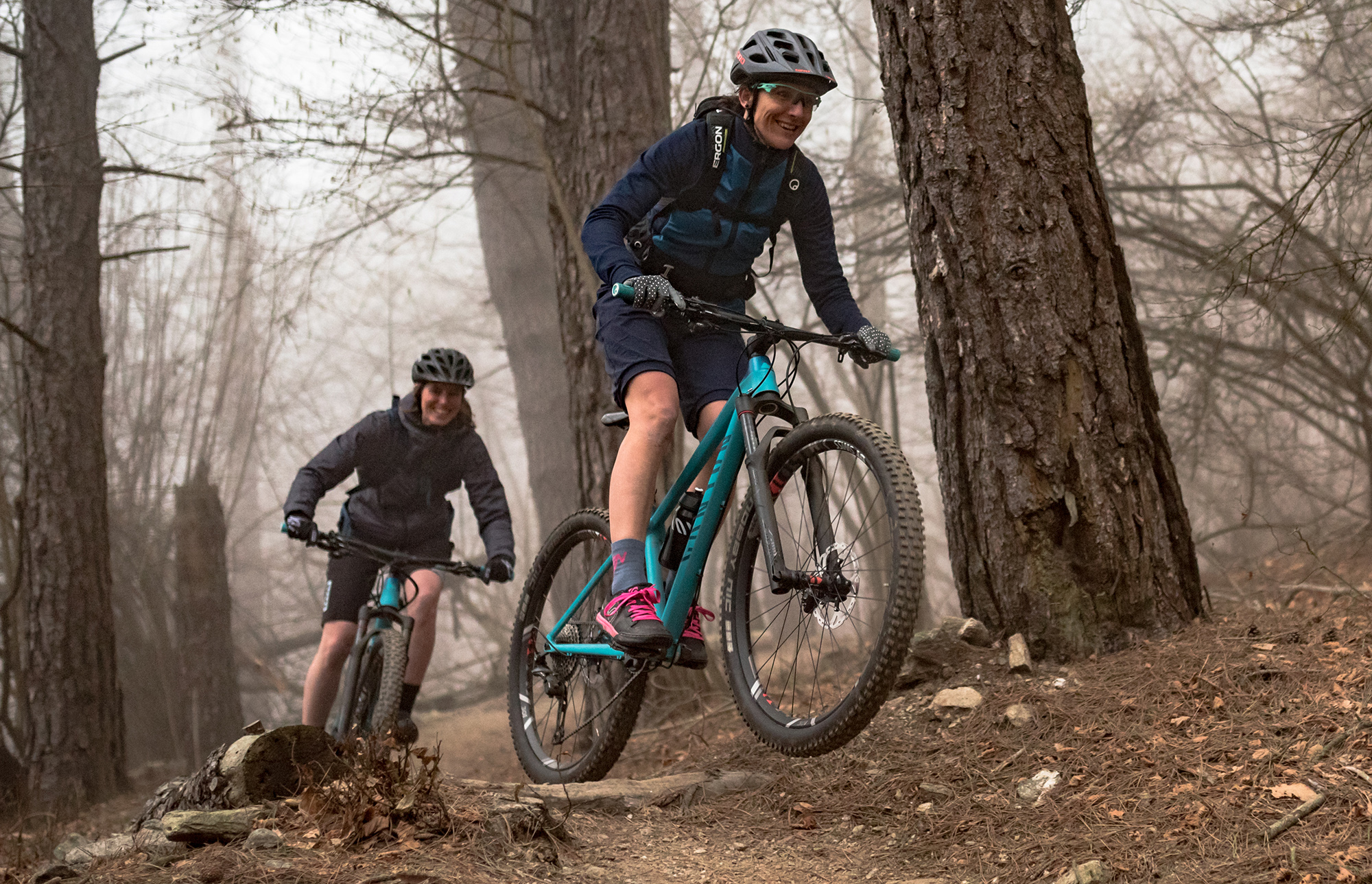 Women’s mountain bikes typically fall into one of two camps. Camp one is a rebranded, repainted version of a men’s bike, shock-tuned for a lighter rider with a female-specific saddle added available in smaller sizes. Camp two comprises bikes supposedly built to accommodate women’s presumed longer legs and shorter torsos.

The first solution gives women great bikes, but they’re not really different from unisex models. Meanwhile, the second strategy has been abandoned by most companies because good and great female riders didn’t like bikes that put them in a more upright riding position; it was unstable and hampered their progression. 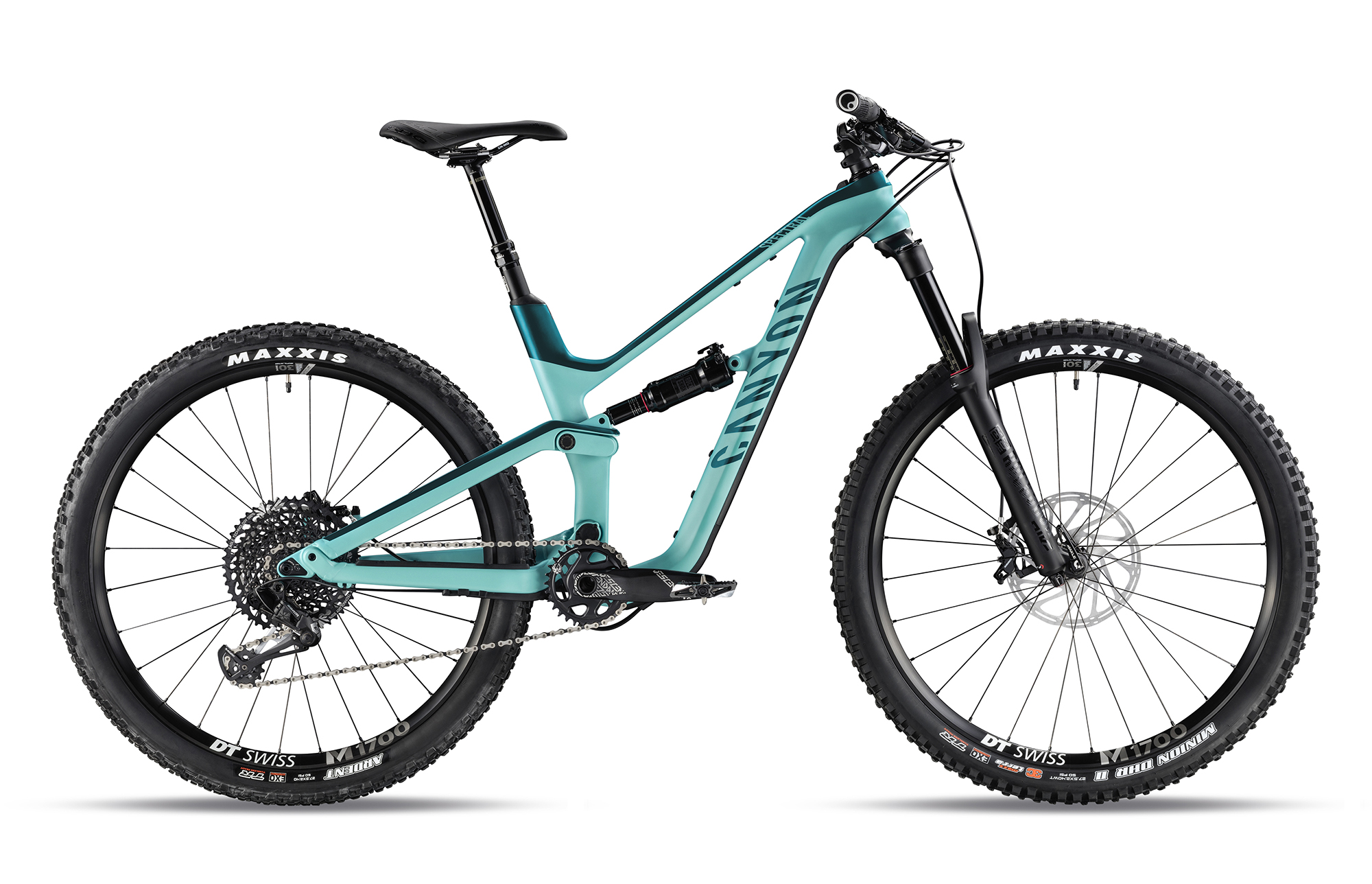 But with the new Spectral WMN, Canyon took a third approach. After assessing data from its current customer base of 68,000 women, the brand built a bike spec’d as nice as the unisex version. But it took into consideration the real differences in women’s physiology. The result gained props even from the hardest charging women riders.

I had a chance to get on the Spectral WMN before it came to market.

In short: It inspires confidence for women riders. It’s a great all-mountain bike for women of varied abilities, from recreational riders to top-end rippers. Read on for my review and more details about the bike.

As a premium brand, Canyon knows that female riders, including their bad-ass female staff, want the highest performing bike. And, ideally, a bike to help them become more skilled, faster, and better able to have fun on the trail.

So, Canyon product manager and former XC racer Katrin Neuman and her team aimed to answer the question: How can we help women be more capable, confident, and inspired on bikes? Then, they looked at physiological data from Canyon’s Perfect Positioning database to see how women are physically different from men.

Physiology Applied to a Women’s Bike

Some of what Neuman and her team found was obvious. Most women are smaller and lighter than men. The most common bike size for a woman is extra small or small. Most men ride medium or large. But they also saw a demonstrable demand for double-extra-small bikes and less need for large ones. 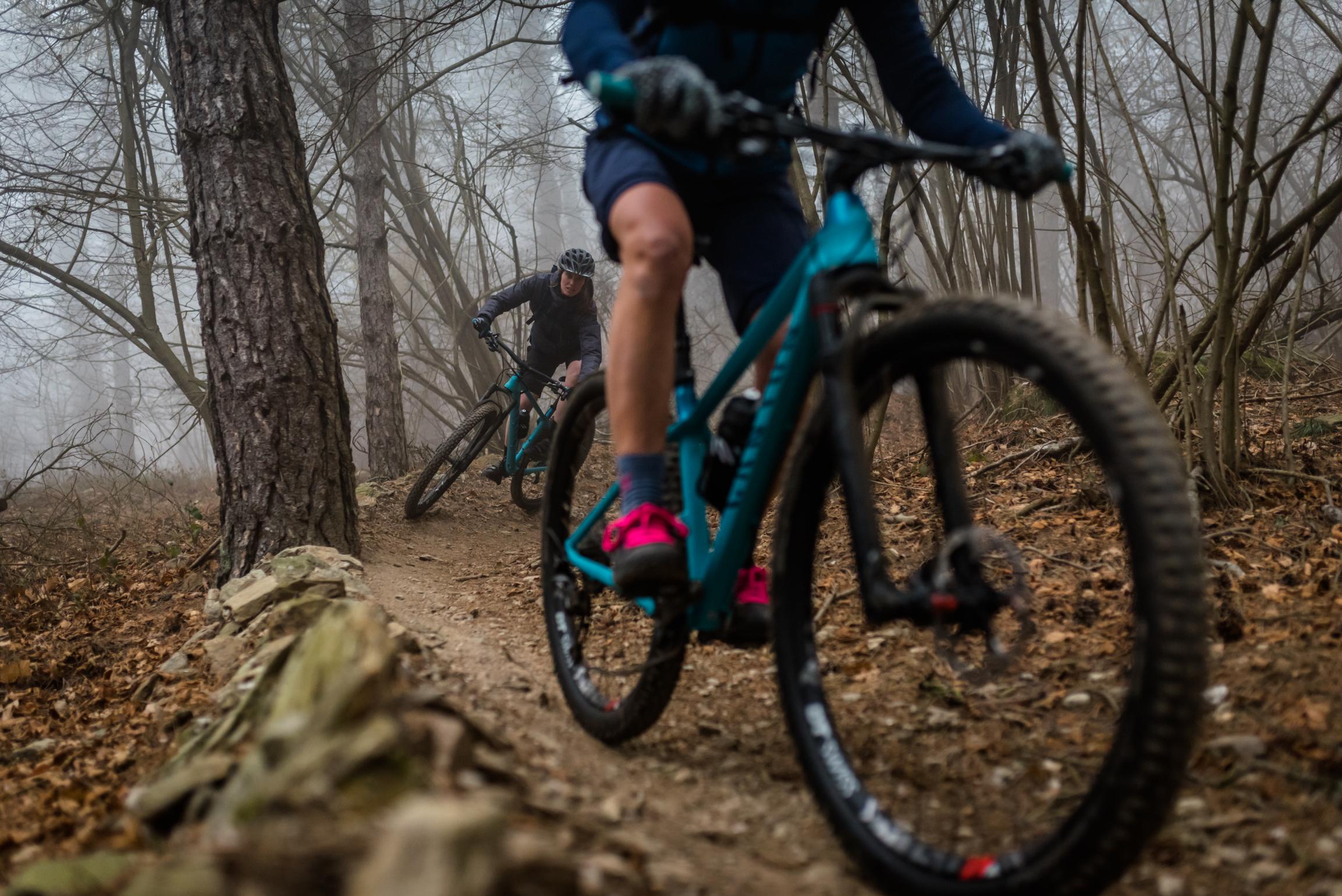 Other companies have claimed women have longer legs and shorter torsos. So those companies shortened the top tube, making the bike feel scary and unstable in technical terrain. Canyon’s data shows women have shorter arms, not shorter torsos – just shy of an inch shorter – and narrower shoulders. Both factors put women in a stretched position on a unisex bike. They also learned that women prefer greater standover height than men.

So the team concepted the Spectral WMN to improve a woman’s ability to control her bike by making the reach 2 inches shorter for a more balanced position. Women generally have less power in their upper body, and sitting too far back on the bike reduces traction and control of the front wheel.

Next, they moved the top tube lower down on the seat tube for more standover, giving the rider extra room to maneuver. They did this subtly, without dropping the top tube so far as to make the Spectral WMN look like a girlie bike. 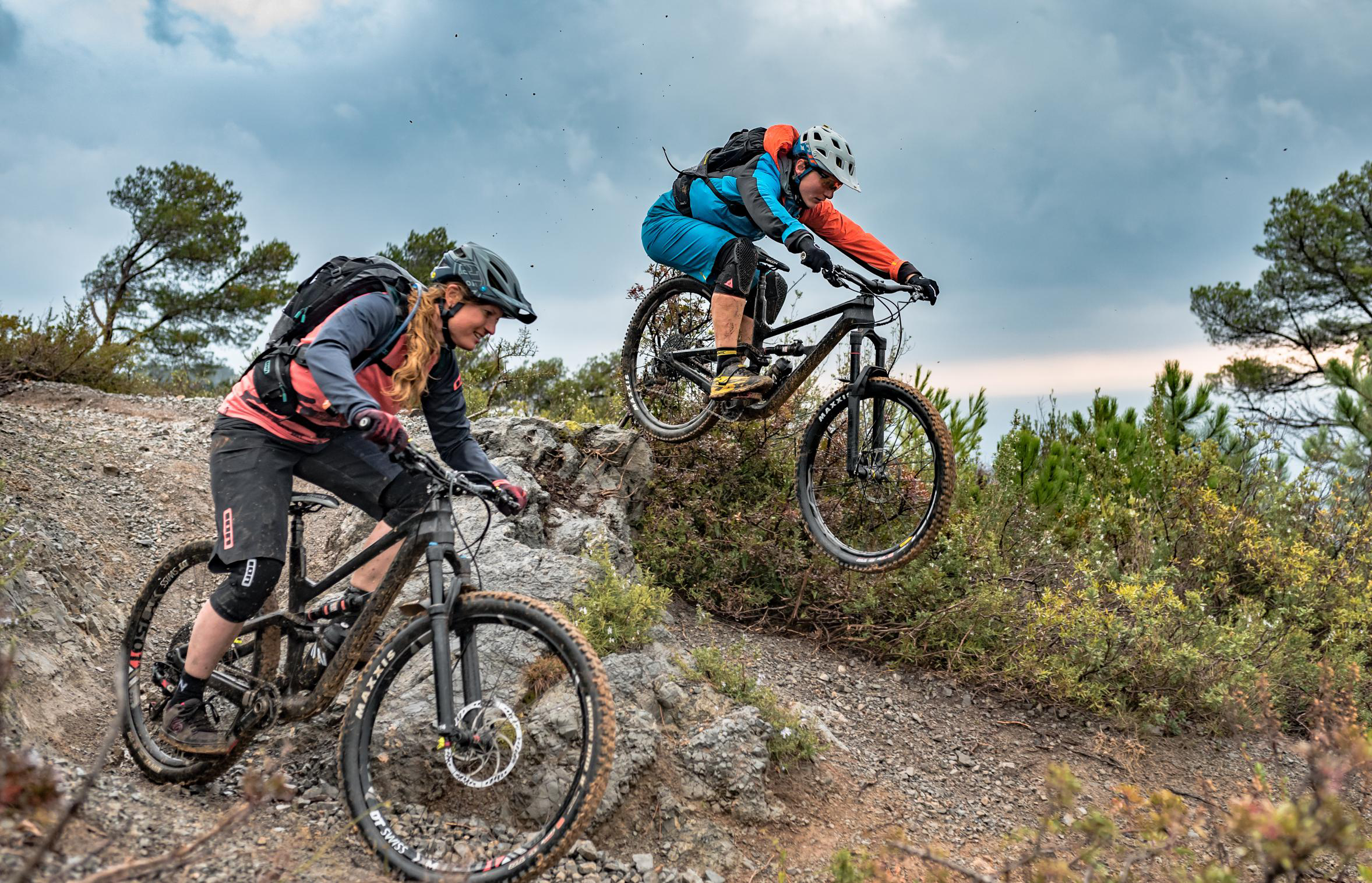 Then they lowered the bottom bracket and shortened the chainstays to give the bike a planted, not tippy, feel on trail. That lowered the center of gravity while keeping climbing spry. And for good measure, they designed the bike starting with size small, not medium.

“The best proportions in a frame are usually between medium and large,” said Neuman. “This time, we gave our best to small.”

The goal was to make the bike look like any other bike. It had to have Canyon signature features, like aesthetic lines from the head tube back, and to be a true all-mountain bike, one that women could ride on technical enduro trails or anywhere else.

How a mountain bike rides is heavily influenced by its suspension design. Canyon custom tuned a 140-mm RockShox Reba for a rider weight of 141 pounds instead of the standard men’s tune for a rider of 165–175 pounds.

Also, the pivots and the shock position are different from those of unisex bikes’ and set up so that the bike sticks to the ground and feels plush. 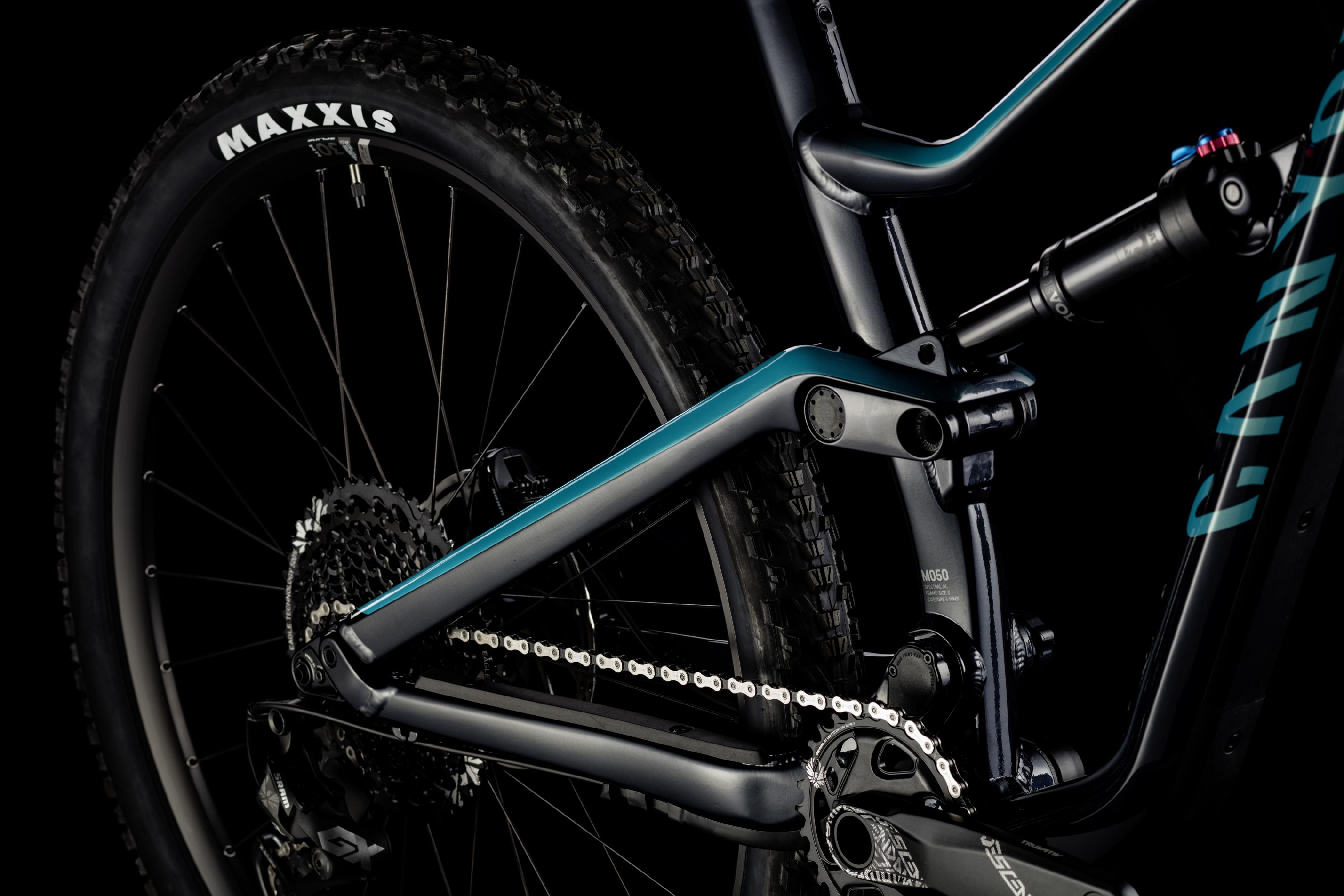 Canyon added a 150-mm Fox 34 fork and a SRAM XO Eagle with a 30-tooth chainring in front. The Spectral WMN’s suspension has a new leverage curve engineered with extra responsiveness at the start of the stroke so that lower-weight female riders can engage the suspension sooner.

It rounded out the package with DT Swiss XMC 1200 Spline wheels with Maxxis minion DHR II 2.4 and Maxxis Ardent 2.4 rear tires. A 740-mm handlebar, which is shorter than what comes on the unisex bike but by no means tiny, finishes the front end.

The result?  The Spectral WMN is one bike that does a lot of different things – 140-mm rear/150-mm front suspension is the sweet spot for a bike to be able to manage all terrain you throw at it. That includes aggressive and technical rock spines, washed out gullies, baby head debris, and roots – all without the bike feeling sluggish on smoother, cross-country terrain.

I am 5 feet 7 inches and above the median rider weight, and I am an aggressive rider. I have broad shoulders and almost never opt to ride a women’s bike. But I liked this one enough I’d consider buying it.

I climbed on the test bike, and I immediately felt confident and in control. We shot into a steep, sandy, rooty gully, with small drops the whole way, and the bike steered precisely around the washouts. I rode faster and more confidently than I normally would on a trail I’ve never been on. 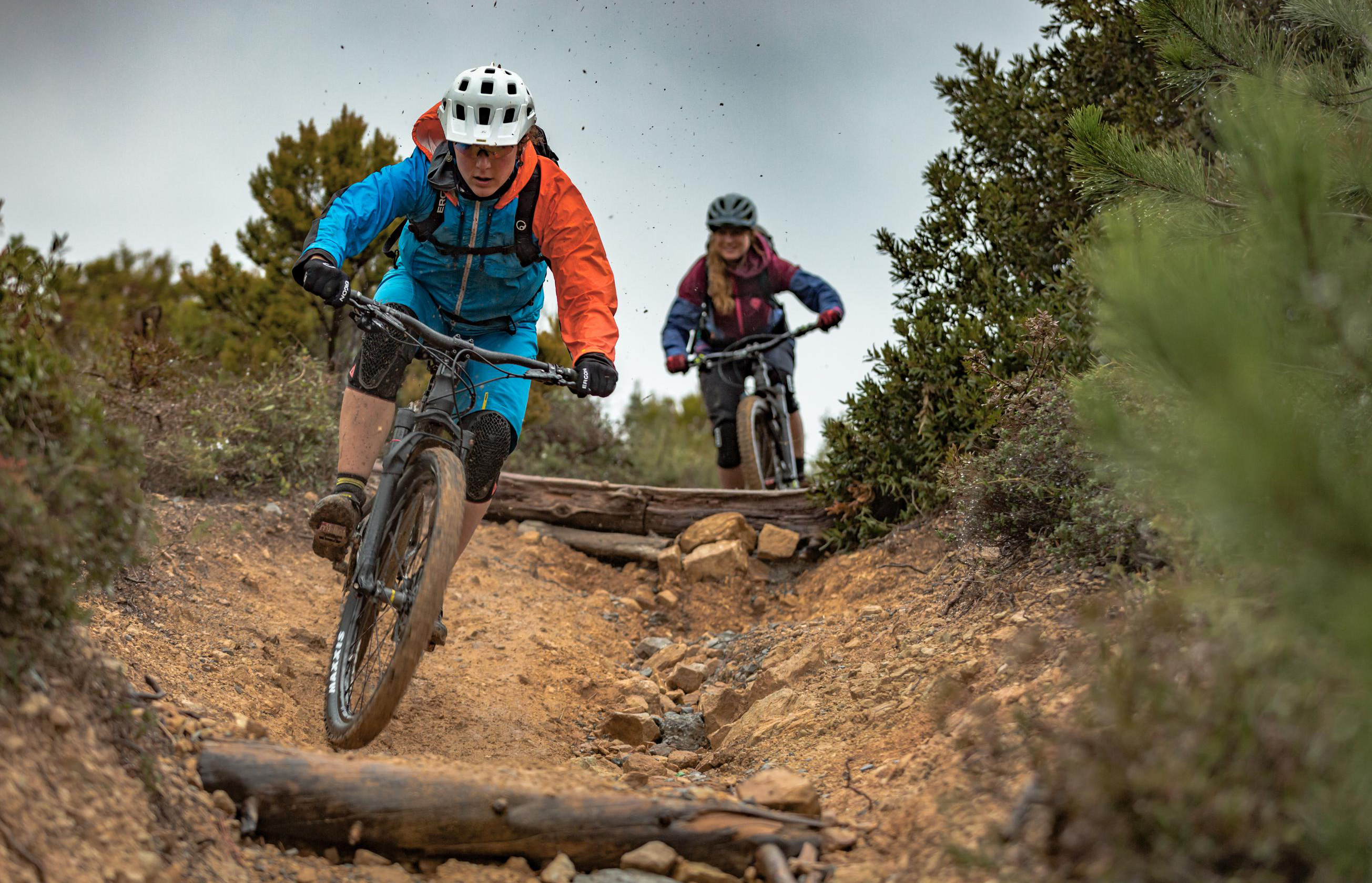 Neuman said that when she rides this bike she feels like the driver, not a passenger. I swapped the women’s medium for a men’s medium and back, and I get what she is saying. The steering on the Spectral WMN is incredibly responsive – almost effortless. Where you look is where you go whereas the men’s bike felt like it was finding the route for me. The women’s let me choose my own path.

The leverage on the rear shock is different than on the men’s bike. I rode both and ended up putting an extra 20 pounds of pressure in the women’s version to get my sag correct. Then, the suspension felt progressive, stable, sensitive, and never bouncy, even though I never locked it out.

The only place I noticed a negative was on climbs. The shorter reach made it harder for me to get my body over the front of the bike when it was steep. Though, as I spent more time on the bike, I adjusted my climbing position.

The biggest winners with the Canyon Spectral WMN will be the smallest female riders, who get a kick-ass bike in sizes down to 2XS. But any rider who wants to push her skills can do it on this bike.

Neuman said that in testing she was consistently faster on the Spectral WMN than she was on the unisex Spectral. She swears I was faster on the women’s too.

The Spectral WMN lowers the barrier to entry on a top-end bike. If you’ve ever gotten on a mountain bike and felt like the bike was riding you instead of you riding it, this is a bike you should consider. 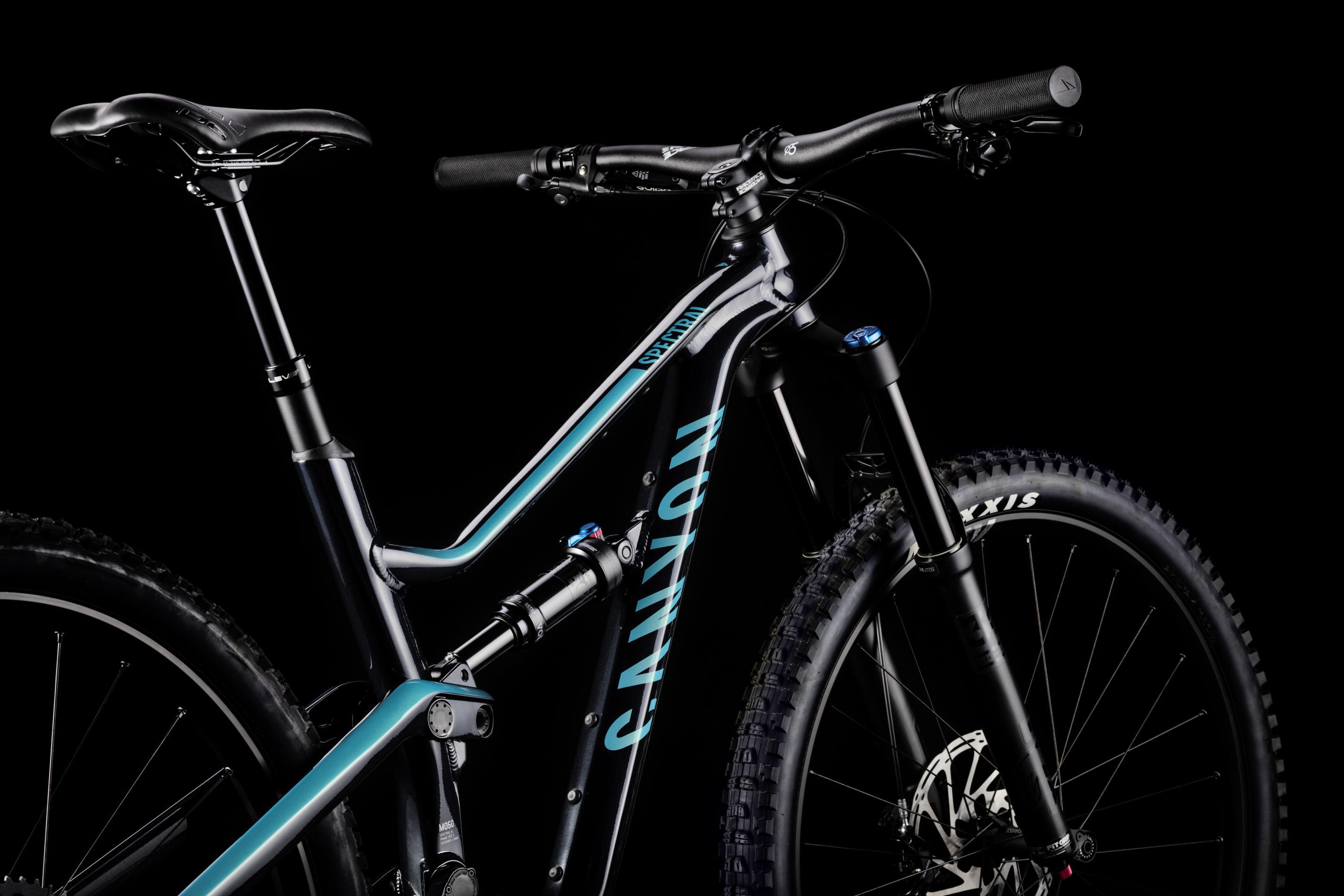 Clearly, Canyon expects that some women will buy the “unisex” version of this bike – they insist on not calling it “men’s.” But the Spectral WMN gives women a great option, one that’s different than what’s available from other brands. If you’re an ambitious beginner, it’s a bike you can grow into. If you’re already a good rider, it will make you better.