Is this a new frontier, or a sci-fi fantasy? A group of future-minded scientists want your help in making Martian exploration, and recreation, a reality.

Climbing Mt. Everest is one of the most grueling feats on Earth. Weeks of slogging up close to 29,000 feet, battling altitude sickness, tackling icefalls, and sucking at dwindling oxygen make it a test of human endurance.

Now, imagine climbing nearly three times higher — more than 13.5 miles into the sky — with virtually no oxygen in average temps 10 times colder than the top of Everest.

Oh, and of course you have to travel 33.9 million miles across the vacuum of space first. Alpine start anyone?

These are the impossible barriers climbers must overcome to scale Olympus Mons, Mars’s tallest peak and the highest planetary summit in our solar system. 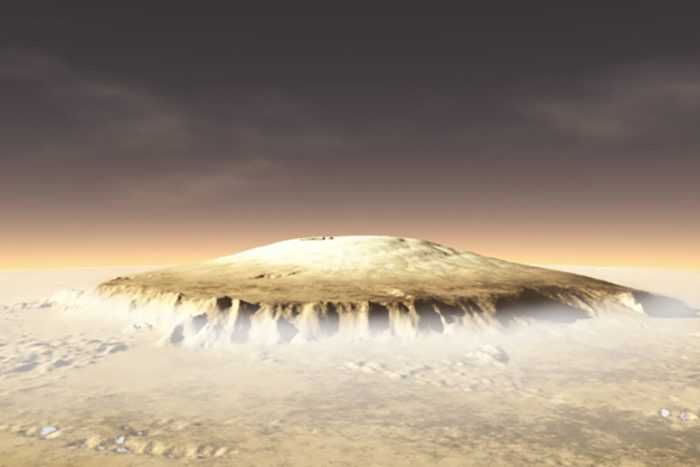 “I’d like to extend a personal invitation to become involved in our effort to establish a climbing route to the summit of Olympus Mons,” writes Michael Chalmer Dunn, director at 4th Planet Logistics, on the company’s blog. His post is a callout to outdoor enthusiasts, experts, and brands to help “generate attention and support for future manned Mars missions” by making a virtual reality climbing experience like no other.

According to Dunn, the casting call of sorts is not aimed at a full logistical plan. That would require gear to keep climbers warm at near -100°F, a full complement of oxygen (the Mars atmosphere has almost 200 times less O2 than Earth’s), and enough rations and equipment to sustain a 72,000-foot climb (likely six months to a year).

Instead, 4th Planet wants to “image map” Olympus Mons and create a plausible VR route. The goal is to create an immersive experience for the public to try, and stoke excitement and support for real Mars exploration.

Anyone interested in throwing their name in the (tinfoil) hat to plot a course up the tallest-known planetary mountain should contact 4th Planet Logistics. It may sound far out… because it is.

The odds of an actual ascent of Olympus Mons is, well, astronomical. Mankind has barely scratched the surface, literally, of deep-sea exploration, let alone deep space. The Mariana Trench, the deepest point on Earth, is only half the distance down (36,000 feet) as Olympus Mons is up (72,000 feet).

I asked Dunn for specifics on a planned ascent — cost, time, equipment… rationale. But he told me finding that information was the whole point of the callout. Plus, 4th Planet has only been posting updates as a business since December. Right now, there isn’t a lot of tangible substance behind its lofty mission.

But Dunn and his team are serious. He told us 4th Planet recently reached a formal agreement to use an underground lava tube in Iceland to test gear that could be used on Mars.

“[We’re] researching and developing inflatable, terra forming and pressure barriers,” he told us. The end goal is to have inflatable tents that would be home to the first generation of Mars explorers.

So far, most of 4th Planet’s work is hypothetical. But the company’s board consists of accomplished scientists and former NASA workers. With a little help, it might help launch the future of human endeavor. And who knows, maybe that help is you.

Up Next: GoPro Pivots, Gets ‘Spherical’ With New Camera