Black Diamond’s impossibly engineered 21-inch Camalot sure was a good April Fool’s joke, but climbers actually use similar-looking pieces of gear for off-widths. These are some of the widest.

It takes an odd sort of person to really enjoy off-widths. This type of climbing requires full-body movement (and sacrifice) in a wider-than-average crack. The gear required to climb these routes is, by design, weird as well.

Back in the ’80s, there were few options to place gear in cracks wider than 4 inches. Climbers used tube chocks, sideways placements of bong pitons, and hexes for placement of Camalots. But for a crack over 4 inches, the only option was to run it out. Wide gear allowed ambitious climbers to push the limit of what was possible.

Here’s a collection of some of the most formidable trad gear, designed to help conquer this impressive discipline.

In 2001, Thomas Kasper stumbled upon an article about a group of climbers from Korea who created an 8-inch cam for the infamous Hollow Flake pitch. It’s one of the most brutal off-widths on El Capitan’s Salathe Wall, and climbers often run it out without protection. A cam big enough for that crack was unknown.

Motivated by the story, Kasper began making what he dubbed “Valley Giants” in his machine shop. He hadn’t climbed in 17 years. But Kasper said there was only one foolproof way to test the homemade cams in the wild: Throw on a harness, rack up with the Valley Giant, and place it in a really wide crack. The first generation survived the test on Kasper’s off-the-couch climb of the 2,700-foot route Excalibur Wall on El Capitan.

With a usable span from 6 to 9 inches, the $225 Valley Giant #9 became the widest piece of gear on the market at the time of creation. The lobes are an aluminum alloy cut in Swiss-cheese fashion to optimize the strength of 17 kN and weight of 31 ounces. The creation of the Valley Giant led Kasper up Excalibur and six other routes up El Capitan in Yosemite. His gear has allowed other climbers to do the same.

To purchase, contact Kasper at valleygiant@gmail.com for all inquiries.

While exploring the rocks of Utah’s Escalante Canyon, Craig Lubben felt inspired to climb the wide roof cracks he found throughout the desert sandstone. Unfortunately, these routes were un-protectable with the gear on the market.

So with a desire to venture into this new terrain, he thought of a solution: expandable tube chocks. Driven by springs, the tube would lock into place upon use. Once weighted, the gear would be cammed into the sides of the crack, securing the device in case of a fall or take. 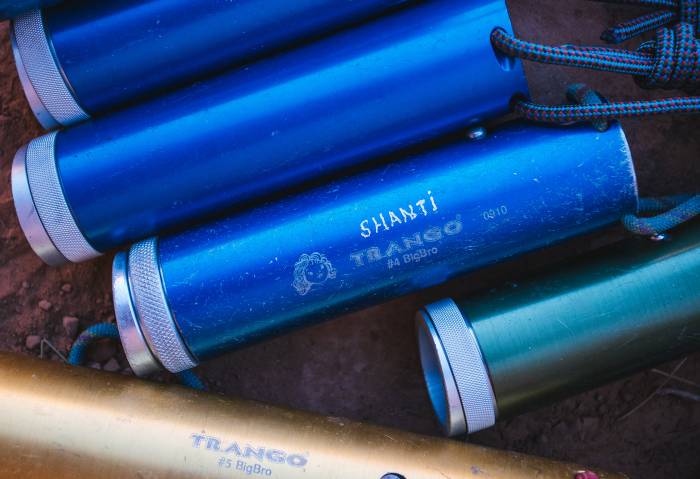 He approached the founder of Trango, Malcolm Daily, with the engineering concept, and together they created the Big Bro. The original production runs were sizes 1-4. Soon after, Daily introduced the half-inch and #5.

At the time, Lubben was pioneering a lot of roof cracks, and the half-inch size was designed to be placed at the end of a roof crack, preventing the rope from sucking in the cam and eliminating the possibility of getting your cam or rope stuck.

The #5, meanwhile, became the largest piece of off-width gear available at 11.3-18.4 inches. The gold piece of gear is now the golden ticket for climbers to protect large features on routes.

In Lubben’s memory, the caricature on the Big Bros is a sketch of his daughter, done by artist Jeremy Collins. The Big Bro #5 is available in limited quantities from Trango Climbing Gear. To add your name to the waitlist, click here.

The Italian Company Kong is renowned among climbers for its unique approach to the world of climbing. Its innovative gear ranges from twisted carabiners to inventive belay options. And it has no shortage of ideas for off-width gear as well.

The Kong Gipsy 6 doesn’t look or operate like a traditional camming device. Upon pressing a button, two legs extend like a Swiss Army knife, making it easy to use with one hand. The gear is then placed vertically, with two legs on one side of the crack and the central point on the opposite. Like the Big Bro, it can’t be bumped upon placement.

The Kong Gipsy 6 doesn’t look or operate like a traditional camming device. Upon pressing a button, the two legs extend like a Swiss Army knife, making it easy to use with one hand. Climbers then place the gear vertically with two legs on one side of the crack and the central point on the opposite. Like the Big Bro, it can’t be bumped upon placement.

The Kong Gipsy 6 is difficult to find; the best chance for purchase is to contact Kong USA directly here. 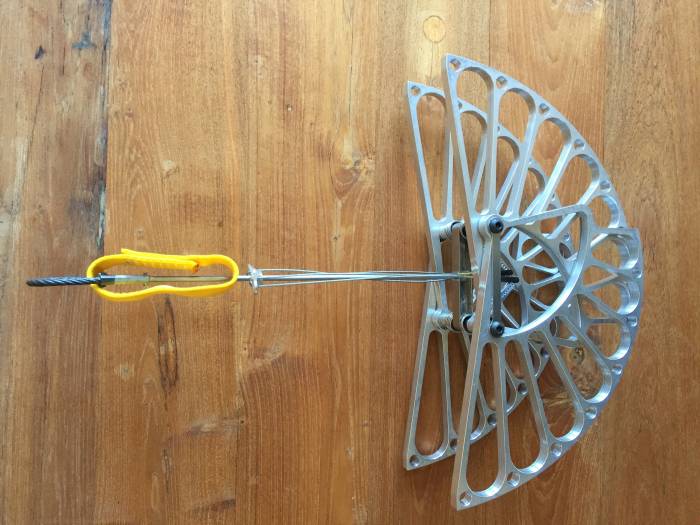 Merlin’s beard, it’s a mega-cam! Weighing 28.9 ounces with a strength rating of 9 kN, the Merlin #10 is currently the largest functional cam in existence.

Unsatisfied by what he saw on the market, creator and mechanical engineer Erick Davidson decided to create a wide piece of gear for both his wife and himself to use on burly off-widths. The goal was simple: maximum range, maximum weight, and an easy-to-use trigger lock.

“The Merlins were never intended to be sold, but a photo was leaked on Supertopo,” Davidson explained. “That created enough demand that I agreed to start making them for other climbers.” 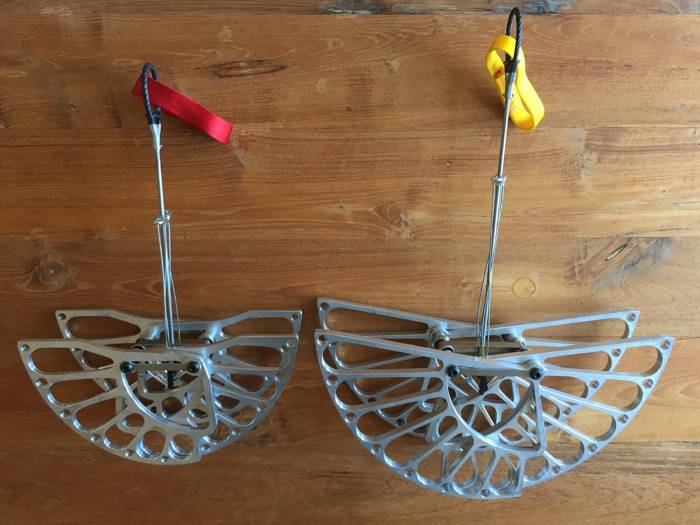 He began by making 8-inch cams and later created the gigantic Merlin #10. With a range of 7.3-12.9 inches, this cam is not for the faint of heart. This size is ideal for a climber who likes full-on chimneys but isn’t a fan of runouts.

Davidson noted they were very happy to have the #10 on the route Right North Book in Tuolumne, which has a 100-foot runout with no other pro wide enough for protection. Weighing 29 ounces, the Merlin #10 will set you back $300.

To purchase, contact Davidson at merlinrockgear@gmail.com for all inquiries.

Before jumping into this one, we’d like to preface it with a big helping of “don’t try this at home, and if you do, it’s at your own risk”!

With that said, this creative piece of protection harkens back to climbing’s early days, where bold explorers built protection through creative means like nuts and bolts and chocks. But again, this is not safe, and we don’t recommend you try it. 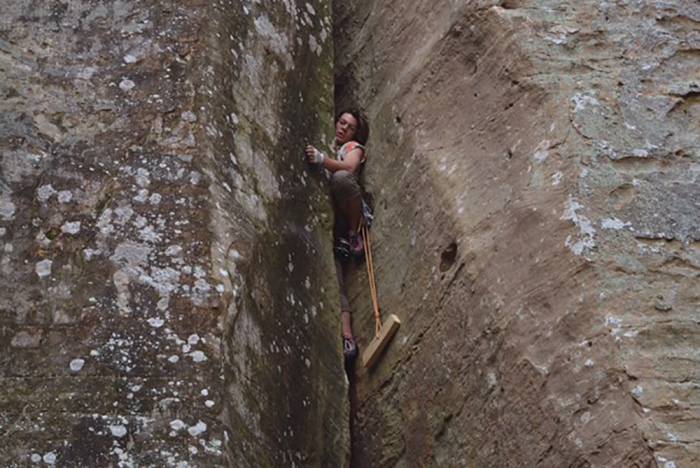 Deep in the Midwest wilderness of Jackson Falls, Illinois, resides an ungodly route that climbers call the “Off-Width Exam.” The 5.12a off-width route is as burly as it sounds.

Marshall King and Aidan Zuber, two eager young climbers from the area, desperately wanted to lead the route but didn’t have the necessary gear to do so without a terrifying runout. Instead of wallowing around, King followed the example of climbers before him and explained, “We did what we had to do.”

Out of adversity came the Brig Bro, a piece of lumber cut directly for the dimensions of the Off-Width Exam. 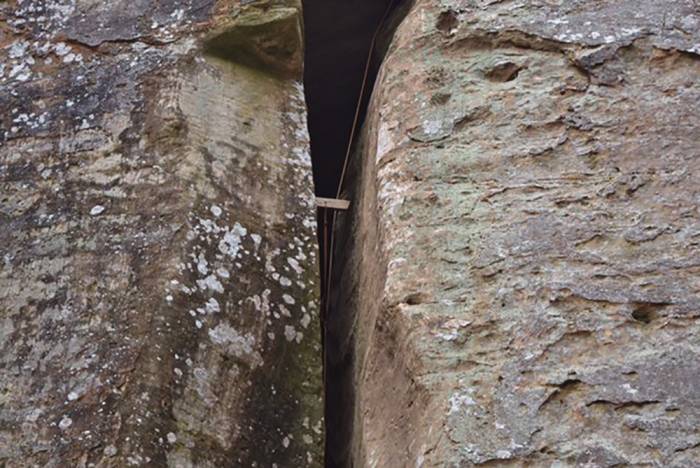 The Brig Bro operates simply. Constructed from white pine and drilled by hand, the gear doesn’t need a special mechanism to be placed on a route. King and Zuber fitted a sling through the center to clip with a carabiner.

Like the other, more refined products listed here, the Brig Bro was an invention of necessity. And as climbers continue to push their limits, we can look on as the gear they use to protect themselves continues to evolve, bigger, wider, and, often, even a little bit weirder.