They’re not actually custom-made, but the fit makes Hestra’s Climbers Short 5-finger belay gloves feel like they were made just for you.

If such a thing exists, I’m a belay glove curmudgeon. I love having a pair and damn near won’t go out without them. Over the years, I’ve come to include them for everything from crag days to multipitch outings.

That being said, I don’t always like what I’ve got. I’m fussy about dexterity, sizing, easy on/off, and durability. But during testing, Hestra’s fingerless Climbers Short 5-finger belay gloves excelled in each of those categories.

I found the brand used the most solid materials in the correct places, while the patterning, sizing, and stretchy textiles facilitated a comfortable fit.

In short: True to the company’s longstanding reputation for quality, Hestra’s fingerless belay gloves checked every box in our testing. A durable, double-layered palm fought off abrasion, and careful material choices kept it dexterous. 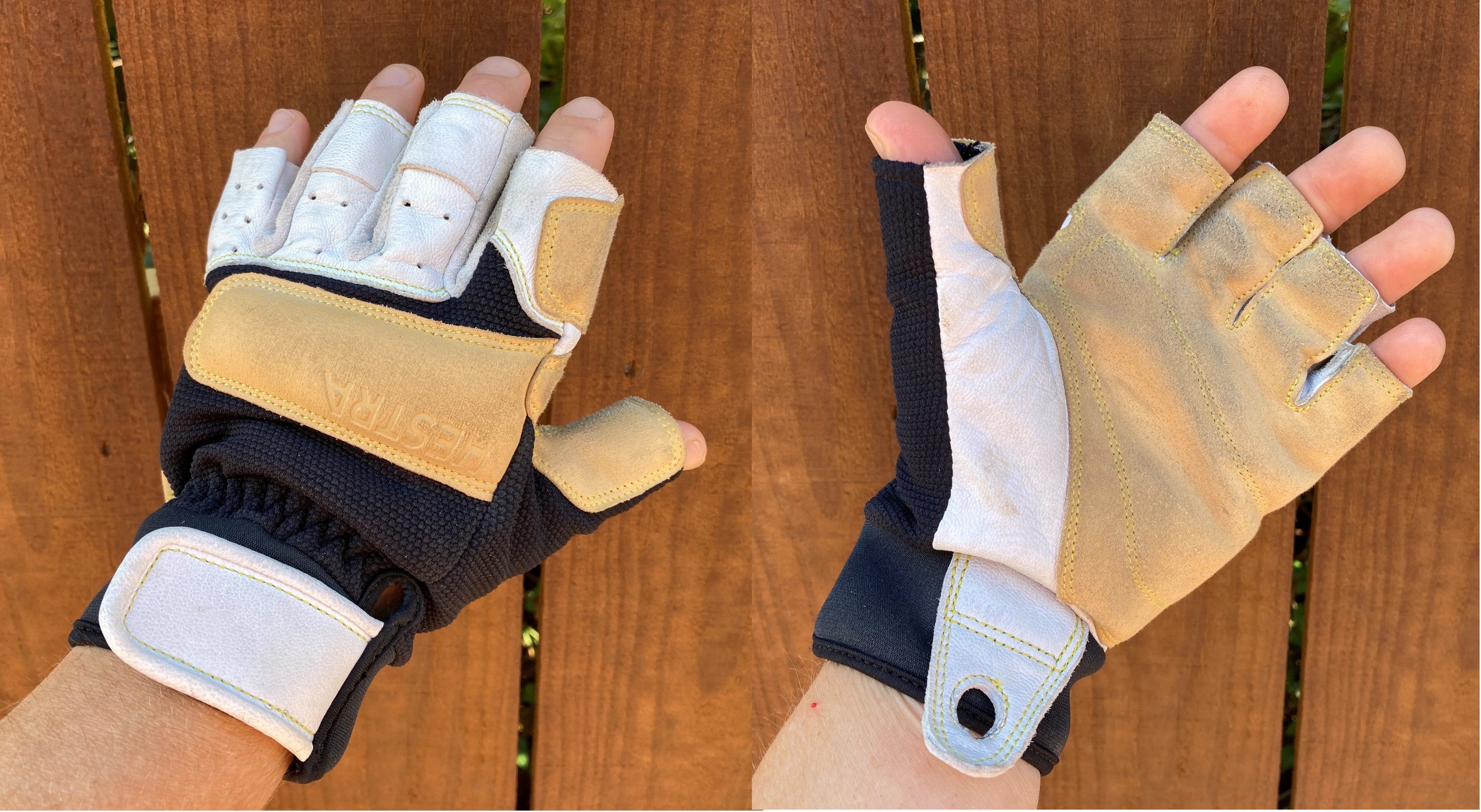 Hestra positions itself as a tradition-anchored, quality-obsessed glovemaker. The Swedish company started making gloves out of a shack in 1936, and it still doesn’t make anything else.

Hestra still outpaces its contemporary competitors with innovations like the sizing system. Instead of the usual S/M/L, Hestra sizes its gloves from 5 to 13.

Palm circumference determines your size on the unisex scale. Sizes revolve around “average hand dimensions,” so the brand advises that the sizes are recommendations.

I wore a size 9 for my 215mm hands, which put me in about the lower third of the size range. The gloves felt comfortable right out of the package — not too tight, not too loose.

At first, that did concern me a little because I worried they’d get too loose once I broke them in. A well-fitting leather glove is nice because it shapes to your hand, but once it stretches to fit, there’s no going back.

Hestra seems to have addressed the stretch-out factor by using a textured polyamide/elastane fabric on the back of the hand. The panel combines with an elastic wristband strap and Velcro strap to make the glove adjustably snug. 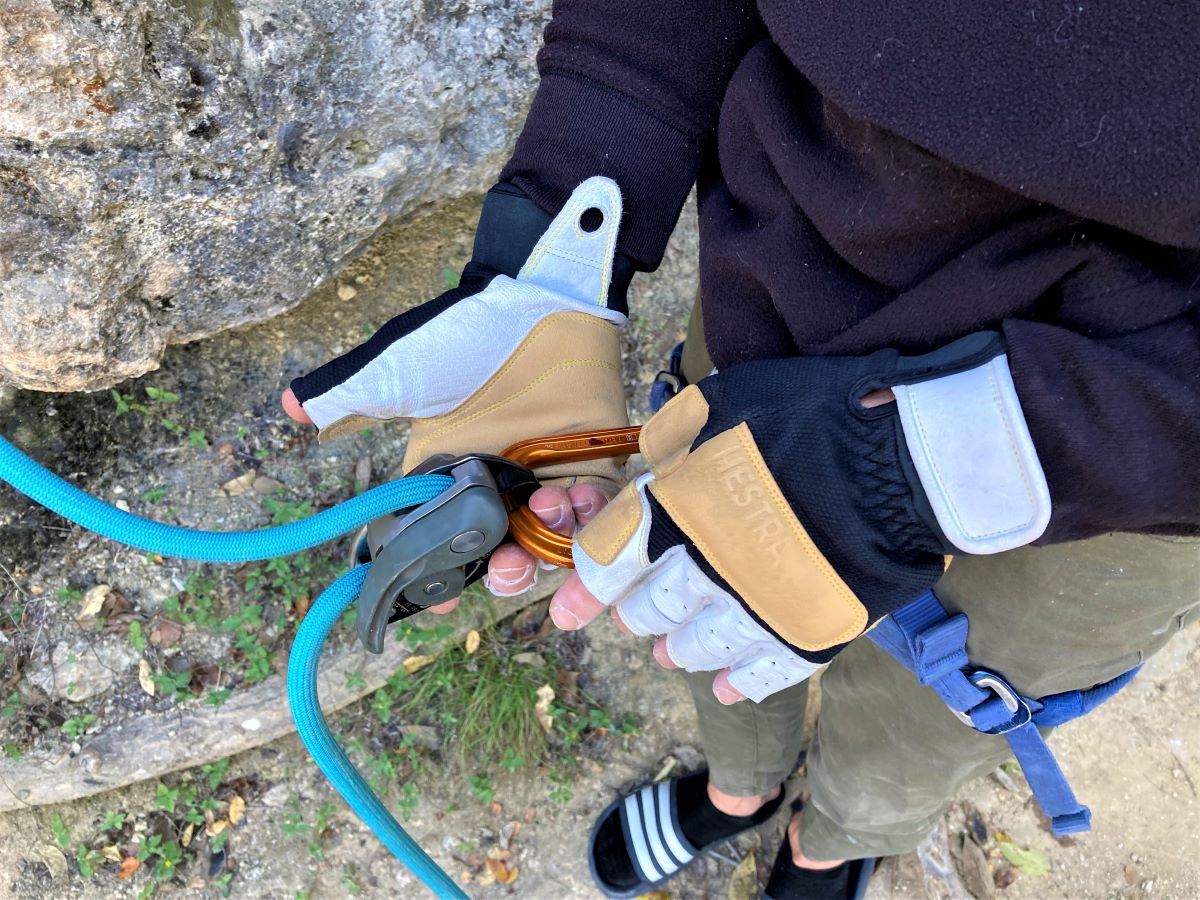 In practice, the gloves were outstanding. In my home climbing areas, it’s crucial that belay gloves handle well but also hold up to abuse.

The climbing is short, bolt placements are critical, and clipping stances are often well-defined and somewhat low. For the belayer, that means frequently taking and giving armfuls of slack rapidly and catching leader falls carefully.

A layer of DuraTan sewn over the leather on the palm and fingers held up to substantial rope friction while I paid out and yarded in slack. The finger openings, while broad, never snagged or caught on anything. The gloves never popped a stitch or showed a fray, and they fit the same at the end of the testing period as they did initially. That was the case despite a couple of my bigger-handed friends trying them out.

At first, the goat leather used for the insides of the fingers seemed almost too thin. I could tell they would handle well, and the DuraTan palm made sense — the brand says it resists abrasion 10 times better than leather.

But I wondered if the exposed leather would wear out, especially on the thumb and between the fingers. 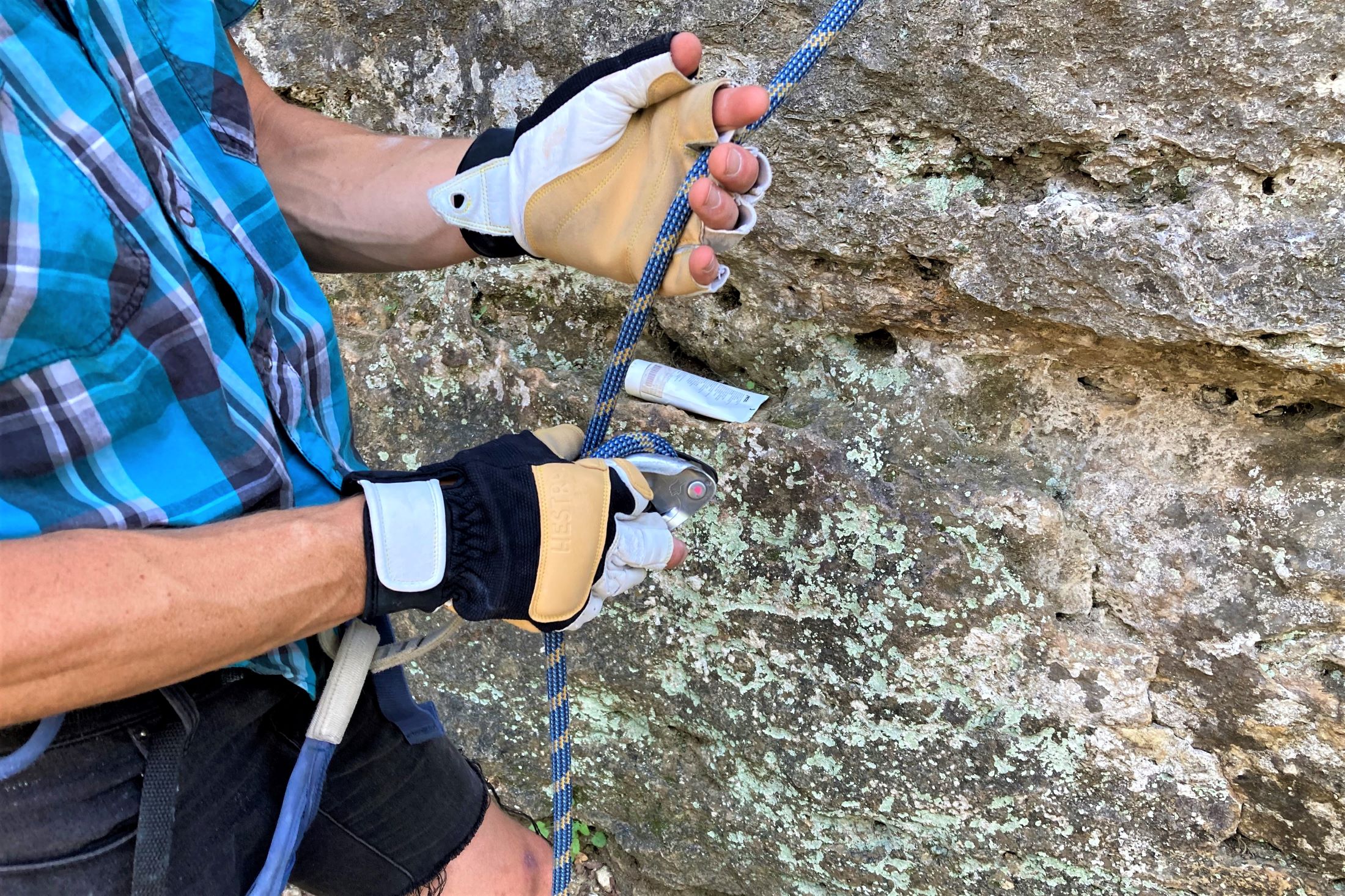 That wasn’t the case. Instead, the gloves shaped nicely to my hands and grip almost instantly. And the reinforced areas proved solid enough to handle the brunt of the abrasion.

Not only that, the DuraTan refused to take on a patina like most leather eventually will. The effect improved my grip, especially on greasy ropes.

One man is suing a climbing guide and ACMG for alleged "negligence and breach of contract" that lead to a near-fatal climbing accident. Read more…

In addition to construction, Hestra pays evident attention to specific user comfort in the belay gloves.

The perforations on the backs of the fingers helped prevent my hands from getting swampy even on hot (85 degrees Fahrenheit or higher) belays in direct sun. Still, they were thick enough to ward off the numb, claw-like feeling you get during long belays on cold days.

Meanwhile, the padded knuckles gave me a surprising security boost. At first, it seemed a little weird. Have I ever punched anything (or anyone) while wearing belay gloves? No, not intentionally, but I have raked my knuckles on rock plenty of times while stacking and rearranging carabiners on anchors.

And as a 125-pound person who almost exclusively belays bigger people (not pictured), I’ve often pancaked fully into the wall while taking the ride on a lead fall. 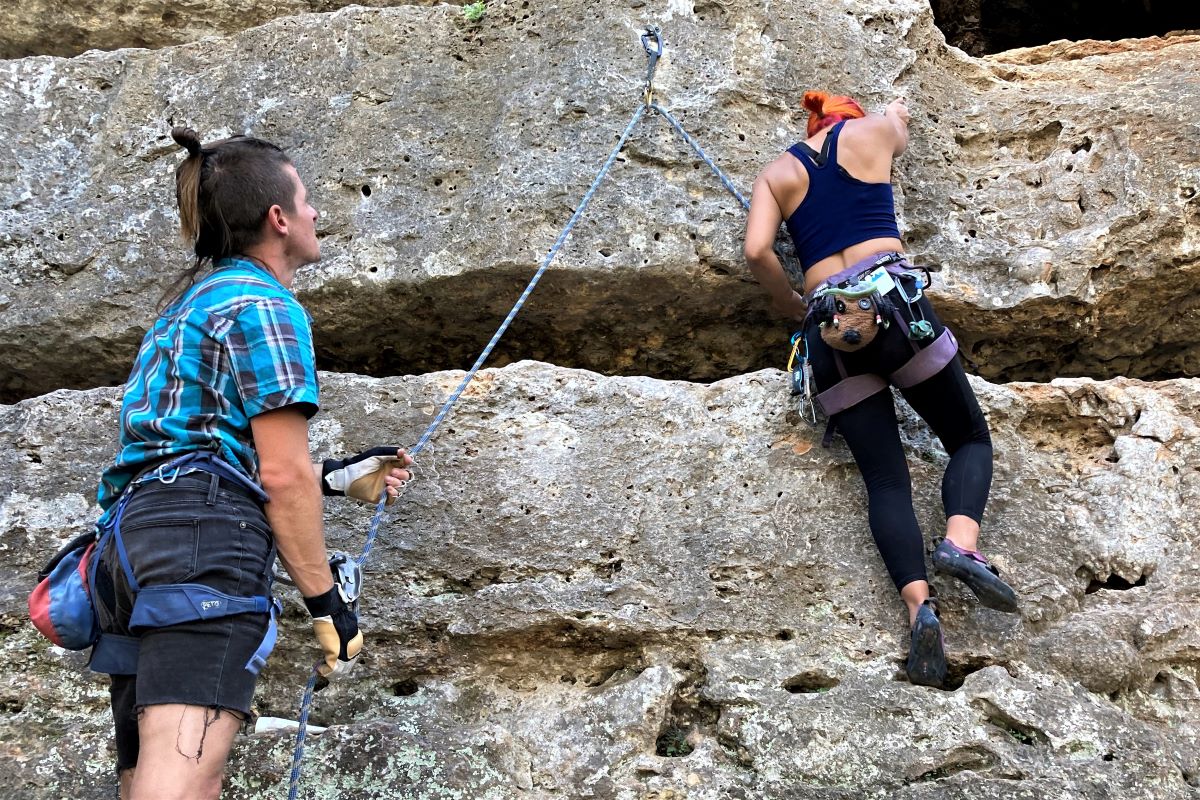 Hestra’s knuckle pad registered as a welcome security blanket for those scenarios. In practice, it also felt good for belaying long hangs/shakeouts when I often wrap the brake strand around my hand.

My only criticism of Hestra’s gloves was the size of the hang loops. Unfortunately, they weren’t wide enough to comfortably fit a real carabiner through.

But this nitpick wasn’t a significant issue. After a few sessions, I’d stretched them to fit agreeably. In an ideal world, the cut of the reinforced palm might be a little wider at the thumb notch. However, that has yet to create any issues with my gloves. 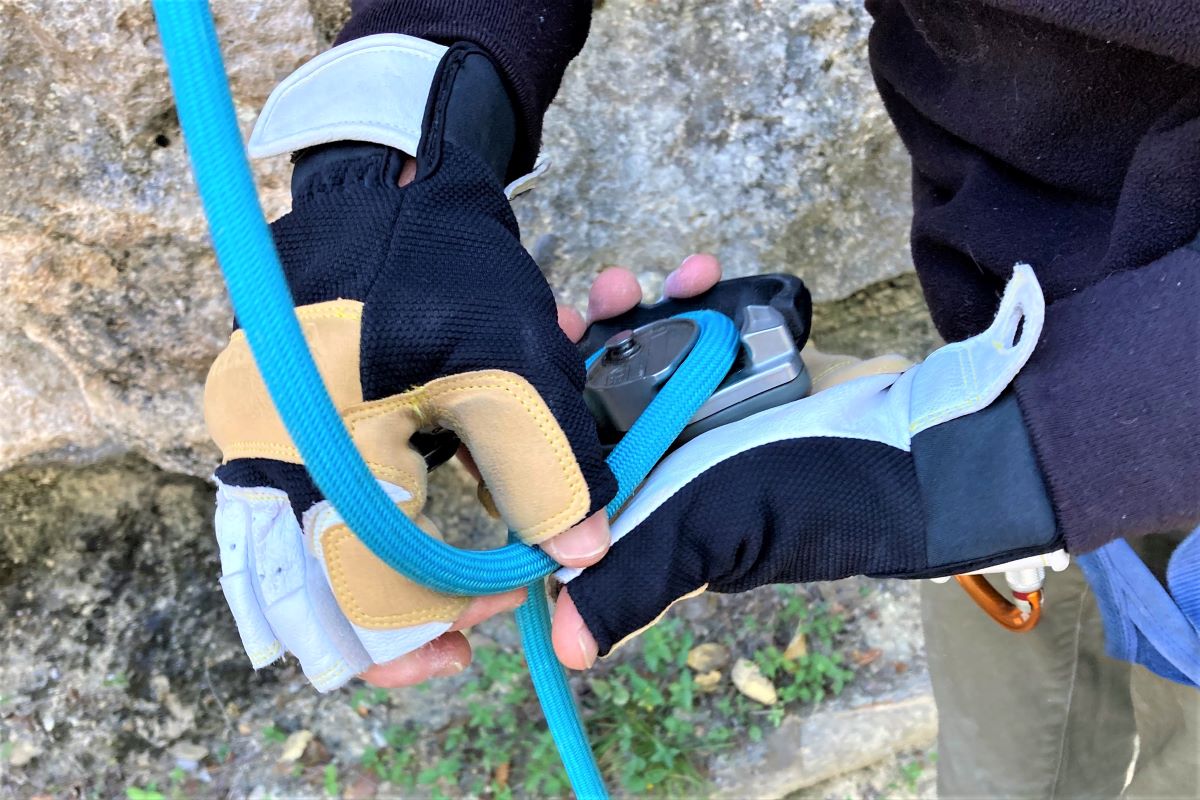 In its fingerless Climbers Short 5-finger belay gloves, Hestra packs a lot of effort into a simple item. Belay gloves can be anything from annoying to an afterthought, but Hestra elevates the form with thoughtful design.

And at a moderate $55 MSRP, the Hestra outperformed every other belay glove I’ve worn in both handling and construction quality.