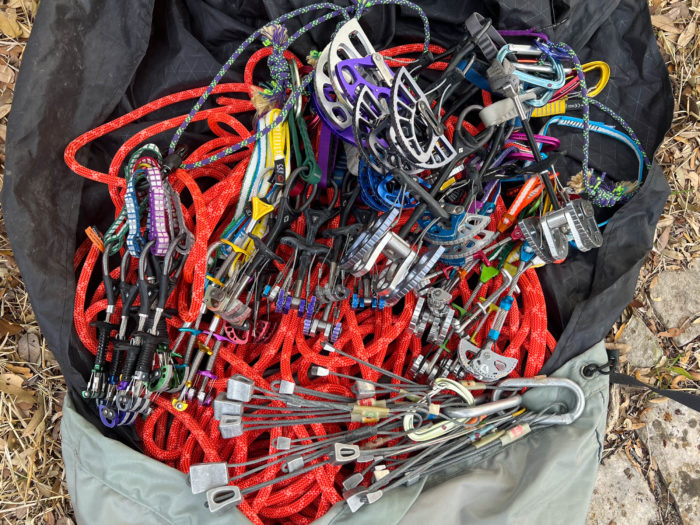 It makes sense. These venues are full of fun, safe, and straightforward routes that can usually be tackled with minimal experience.

What’s the Difference Between Trad Climbing and Sport Climbing?

Heck, many climbers don’t venture beyond the realm of sport climbing. Fixed bolts in walls provide a strong sense of safety and reliability that can make a world of difference in confidence as the amount of space between a climber and the ground goes up and up and up.

Trad, or traditional climbing, is a whole new ballgame. Rather than relying on fixed bolts and anchors, trad routes require climbers to place their own protection at different points in the route. Since no rugged bolt or fancy glue is holding an anchor point to the wall, there’s no guarantee that trad gear will hold in the event of a fall other than the climber’s faith in their ability.

Cams are a form of trad protection known as active protection. They contain moving lobes that retract and expand to fit into cracks. They come in various sizes to wedge into cracks ranging from less than an inch in width to those in which climbers could fit a good portion of their bodies, also known as off-width cracks.

Cams are color-coded according to their size, making them easy to identify. One end of a cam will have the actual cam system, which includes a trigger mechanism that moves three or four different lobes into a thinner position when engaged. When the trigger disengages, the lobes move back into a broader configuration to press against the rock.

The other end of a cam will have a sling on which climbers can attach a carabiner and clip into, just like a sport climbing quickdraw.

When a climber falls on a cam, the downward force exerted on the device works to expand the lobes. This locks the cam into its placement as it’s loaded.

Most cams come in a standard four-lobe design, but some, known as TCUs, or Three Cam Units, only use three lobes.

What Are Nuts and Hexes?

Unlike cams, nuts and hexes are known as passive protection. They don’t have any moving parts. Instead, they contain metal shapes that wedge into small cracks or divets in the rock, along with a metal cable loop. Nuts have tapered or curved edges that should fit into a crack with the most surface area in contact with the rock as possible. Since the nut tapers, they should wedge themselves in the rock under force and hold during a fall.

Hexes function similarly, but they are shaped in six-sided tubes. When they’re pulled downward, they can rotate to lock into place. These can be placed vertically or horizontally and are ideal for parallel cracks, whereas nuts are better for cracks that taper or constrict.

Nuts come in sizes ranging from 1 to 13 and are available in various materials including aluminum, brass, and copper.

Since neither of these types of protection has complicated the moving parts of slings, they’re much lighter than cams. They can become stuck relatively easily and often require a unique tool to dislodge.

Tricams fit somewhere between cams and nuts. Climbers can use them both actively and passively. One side of a Tricam is curved like a nut, while the other features a sharp point.

Placed in one direction, a Tricam will lock into place with downward force like a nut. Set in the other direction, the point can dig into rock or ice to increase security with the added benefit of increased pressure due to the webbing rotating the head. In this case, the Tricam is active protection.

What Are Big Bros?

Big Bros fit into wide cracks. Unlike cams, Big Bros use a spring-loaded telescoping tube design to expand between two sides of a crack until they’re wide enough to press into both sides.

They’re typically lighter and smaller than cams, especially on the larger end. Big Bros work by placing the side of the device attached to the climber slightly higher than the opposite end. When a climber falls, the higher side of the Big Bro will lock into position.

To safely climb trad, climbers need to be confident in their knowledge of these devices and exactly how to place them. Some routes are perfect for small nuts and hexes, while others call for larger cams or Big Bros.

How climbers place each of these devices can determine where they’ll hold in the event of a fall. YouTube is full of videos of trad protection popping out of cracks as climbers yell, “Falling!” Learning about these pieces of protection and how to use them properly is no joke.

So why not just stick to bouldering and sport climbing? Well, many of the most famous routes in the world are not bolted. So, the only way to climb them is the traditional method. Also, knowing how to trad climb will open up a ton of new options to climbers outside of more heavily traveled sports routes.

Where other forms of climbing are usually cheap, traditional climbing can get expensive quickly. For example, Black Diamond’s Camelot Ultralight Cams come in seven different sizes ranging in price from an MSRP of $100-150 each at REI. That’s nearly $1,000 for the whole set. A complete set of Black Diamond Wired Stopper nuts goes for an MSRP of $125 at REI.

While it’s not cheap, getting into trad climbing opens a lot of doors for climbers who want to step through. 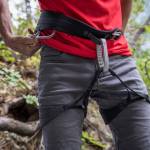