Two Ecuadorian climbers team up with a Nat Geo photographer to attempt a first ascent on Dhaulagiri in a compelling new documentary.

We’re not sure when mountaineering documentaries became so cool that even Eddie Bauer is now involved — but we’re not complaining.

This 40-minute documentary follows an Ecuadorian climber with dreams of establishing a new route on Mount Everest. To get there, Esteban “Topo” Mena teams up with Cory Richards, a National Geographic photographer and the first American to climb an 8,000m peak in winter.

But the pandemic had other plans, closing the mountain before they could attempt the route. So the duo shifts their attention to Dhaulagiri, the world’s seventh-highest mountain.

Once again, Mena wants to find a new way up the mountain. Needing a third climber to complete the route, he taps another Ecuadorian alpinist. Mena picks Carla Perez, the first woman ever to successfully summit Everest and K2 without supplemental oxygen in a single year.

As avalanche dangers nearly kill another team on the mountain, the climbers confront the age-old question of risk — and how much they’re willing to take. 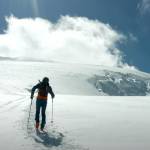 Dynafit GM and ski mountaineer Benedikt Böhm says having kids has made him 'more cautious.' But in 2019, he still nabbed a ski record on Dhaulagiri. Read more…