Home » Climbing » Climbing Explainer: What Is a Portaledge and How Does It Work?

Nothing quite compares to lying down, or even sitting, after toiling on a big wall for 10 hours. If you’re not lucky enough to find a natural ledge, it’s crucial to have one trusty piece of equipment: the portaledge.

A portaledge can be considered a hanging cot, designed for two people. It’s constructed of aluminum tubing divided into six pieces that connect to form a rectangular frame. Ripstop nylon fabric is attached to the tubing and then tensions to make the platform rigid.

The climbers then suspend this platform with six adjustable pieces of webbing. These level the portaledge and run from the corners and edges of the frame to a masterpoint at the top. A separate rain fly attachment drapes over the whole structure.

Despite the simplicity of the design, they can still be difficult and confusing to assemble. Below we’ll cover the ins and outs of hauling, setup, breakdown, anchoring, and other nuances of portaledge use.

How to Haul a Portaledge

Portaledges come in dedicated haul bags, suspended by two straps. Typically, a locking carabiner clips through these straps and attaches to haul-loops at the bottom of a primary haul bag, keeping it out of the way during the day.

Portaledges come in a variety of sizes and weights. Some models weigh in at almost 28 pounds with the rain fly included. Others weigh in at roughly 15 pounds total, although these can be a bit smaller in size. Both styles are great depending on whether you prioritize living space or weight.

The most daunting and challenging part of portaledge use is the setup, especially at a hanging belay. However, if you follow some simple guidelines, one person can set up most portaledges in just a matter of minutes.

With the portaledge haul bag clipped to the anchor, the first step is to take the locking carabiner that sits through the top adjustment strap masterpoint and clip it to the anchor or bolt.

This is the main point from which the portaledge will be suspended. Most hanging belays on big wall routes have a few bolts spread out, or at least one bolt further away from the rest meant for a portaledge.

From here, you can take the rest of the portaledge out of the bag and unravel it. It will probably look like a hanging mess of metal tubes, fabric, and straps, but fear not!

First, ensure that the straps suspending the frame are not twisted. Next, find the wall-side length of the frame to assemble first, followed by the opposite air-side poles.

Next, you’ll build a third short side, connecting the two long sections. At this point, three sides of the frame will be connected, and you can assemble one corner of the last frame piece. 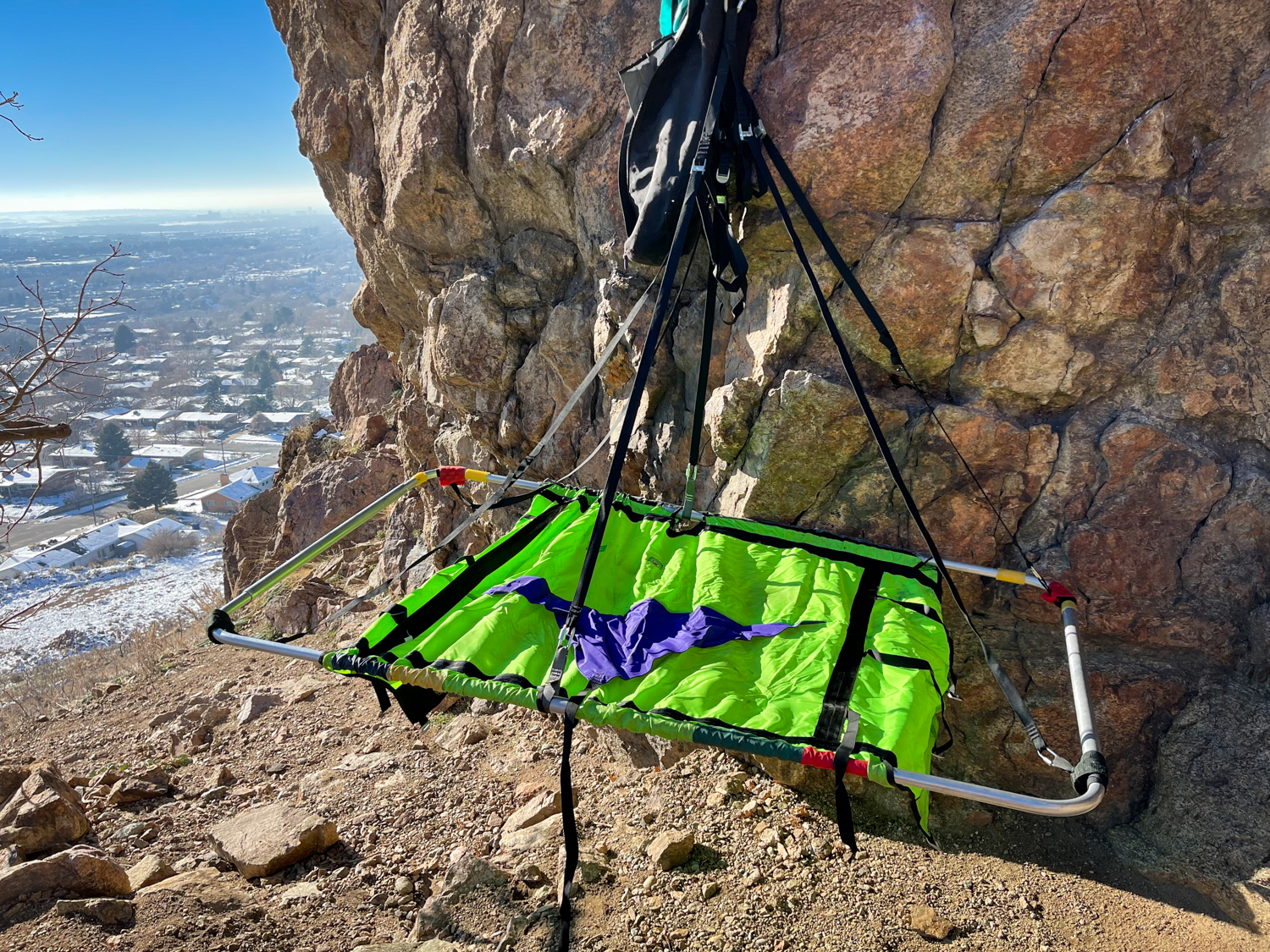 With only one corner left to connect, this last step is often the most difficult due to the tension in the rest of the frame. One thing that helps is to scrunch up all of the bed frame fabric into the middle of the center long poles to relieve pressure near the edges. This allows the last corner to enter smoothly into the connector (possibly with a bit of palm hammering).

This process can prove confusing at first, especially if you’re performing it from a hanging belay while swinging around on the rope. Patience and organization are essential!

If your portaledge has a spreader bar to hold the frame shape, you will install this last on the underside of the frame. They can be challenging to get on, and having two people helps significantly.

Note: On most square-frame portaledges, one corner connection has a cutout along one side, allowing you to tap in the last pole. On newer round-tube designs, it doesn’t matter which corner goes in last.

With the frame now assembled, the next step is to tension the bed fabric over the frame to create a rigid surface.

There are three tensioning straps on the head and foot of the bed frame that wrap around the outside poles before connecting back to themselves. Once you thread all three straps on each side, tension them gradually, trying to keep the tension even between opposing straps.

At this stage, it’s essential to not let the portaledge “taco” as you tension the straps, which is when the ledge frame rotates torsionally and deviates from a flat rectangle.

As you tension each set of straps, re-flatten the frame as you go until all straps are taut and the bed frame is rigid.

The last step of setup involves using the cam-buckle suspension straps to level out the platform. Without standing on the portaledge, adjust all of the straps to a similar tension.

It’s best to keep all the straps as long as possible while maintaining a level platform. The longer the suspension straps are, the more stable the frame and the more room it will have when sitting inside the ledge.

Once the ledge is roughly leveled, have one person stand in the center of the portaledge and make microadjustments to the leveling straps to ensure even tension. You’re now ready to relax and enjoy sweet, sweet flatness!

When you’re ready to sleep for the night, don’t forget to attach and tension the center divider that pulls the centerline of the portaledge taught. This will ensure a flat sleeping space for you and your partner, avoiding any sore shoulders from rolling into the center of the platform during the night.

If opting to use the rainfly, you will need to install it into the system in between the wall anchor and the main carabiner suspending the portaledge.

If any adverse weather is in the forecast, it’s best to do this when setting up the portaledge initially. You can deploy most rainfly designs from above and wrap it around the entire ledge. Some have an extra tent pole to help create more space on the inside.

One method is to anchor one side of your climbing rope from the anchor, run that to a knot in the portaledge-suspending carabiner, and then down into the portaledge.

A figure-eight on a bight knot at the end can serve as a safety masterpoint for clipping into when on the portaledge. The climbing rope system would catch you if the entire portaledge were to fail for some reason.

Breaking Down the Portaledge

After you’ve enjoyed a glorious morning of hot coffee and breakfast up on the wall, and the haul bags are all packed up, it’s time to break down the portaledge. Reversing the setup process works well, with some added nuances.

Start by releasing tension in the bed frame, sliding the fabric into the center, and disconnecting all corners and poles.

Once you have a hanging pile of fabric and poles, find the folding method that gets all of the poles lined up. I find that folding the corners into the center in a reverse orientation from each other works quite well.

After all the poles line up, roll all of the poles and fabric into the suspension straps so that the straps wrap around everything to keep it tight. This makes putting the whole bundled unit back into the haul bag easy.

At the end of a long day of leading, hauling, and jugging, nothing compares to relaxing on a perfectly flat surface with a warm cup of tea and dinner. You can relax and watch the sunset with your legs hanging over the edge and 2,000 feet of air below them.

It’s these moments that make all of the hassles of big wall climbing worth it!

Up Next: Climbing Explainer: Belaying for Top Roping vs. Leading