Many people consider the EarthRoamer to be the most capable overland rig ever made. We recently caught up with Bill Swails, the man behind the vision, to talk about his adventure into entrepreneurship and his globe-circling machines.

When Bill Swails set out to create the most uncompromising overland vehicle, his checklist wasn’t long, but it was ambitious. It had to conquer any road with unrivaled reliability and mile-crushing range. It had to drive laps around the globe with yacht-like comfort and self-sufficiency.

And perhaps the most audacious marker of all: There couldn’t be anything better. 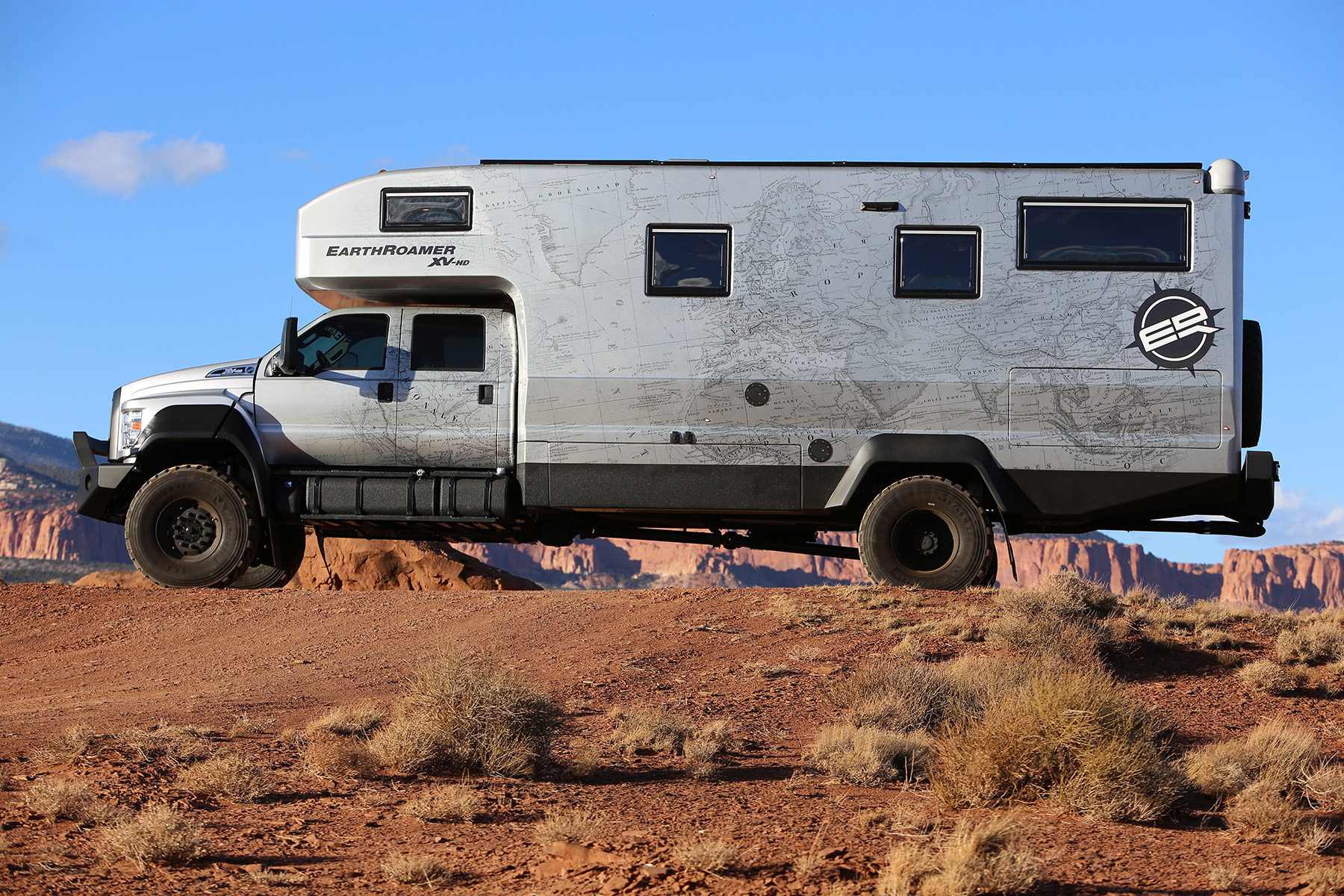 In 2003, the first Ford-based EarthRoamer rolled off the shop floor and in one fell swoop redefined self-contained, go-anywhere travel. It was bold, beautifully crafted — and expensive.

“I can’t remember, but I think our first truck sold for $145,000,” Swails said. “Everyone thought we were crazy. I wasn’t sure anyone would pay that much, but we started building the next trucks right away, and people kept calling to buy them.”

When we last spoke with Swails in 2015, a freshly minted LTS model with full trim fetched more than $500,000. Driving the higher price, the chassis received a full reboot with a reinforced frame, air-ride suspension, and mil-spec tires and wheels. Custom bumpers and fender flares completed the brawny stance. 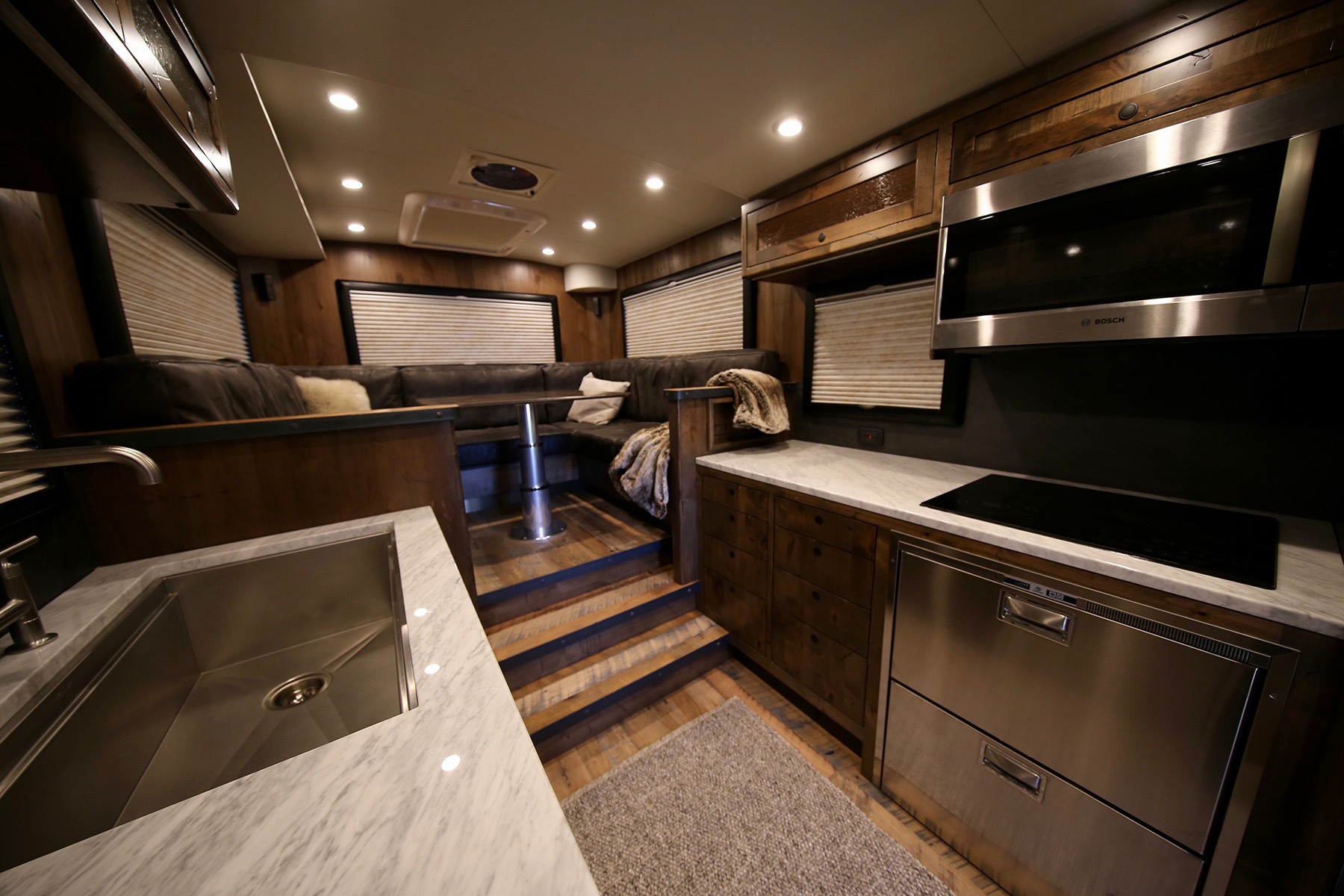 In 2017, EarthRoamer doubled the size of its Dacono, Colorado, factory and hired additional designers and engineers, a few from the aerospace industry. With the new resources in place, the brand increased production efficiency.

Today, its team of 88 employees can build a complete LTS truck in just 54 working days. And despite the naysayers who say the prices are too high, EarthRoamers sell as fast as they roll off the factory floor.

Celebrities like John Mayer and Jason Mamoa placed orders, with Mayer currently awaiting his second rig. In 2017, Swails also unveiled EarthRoamer’s largest project to date, the colossal EarthRoamer HD. Built on a Ford F-750 chassis, it’s a continent-conquering beast with a price equal to a stable of Ferraris.

“If you would have asked me in 2003 if I would ever sell a truck worth $2 million, I would have said, ‘No way, that’s crazy,'” Swails said. “I didn’t know if people would spend more than $300,000. I think it speaks to the vehicles we build. If buyers see the value, they will invest the money. We just have to keep innovating and delivering the quality we’re known for.”

A Sneak Peek of the New EarthRoamer

I recently returned to the EarthRoamer factory at the invitation of Swails and was the first to see how the best is now even better. And as I expected, it’s more expensive.

If you add your name to the waiting list, which is long, this thing will set you back more than $700,000. As one of only a few journalists fortunate enough to travel in an EarthRoamer for days on end, I still think it’s worth every penny — if you have them to spend.

Swails said, “We’re always looking for ways to make our vehicles better, but we’re set on our current concept. The F-550 paired to our shell is a perfect combination. But we continue to find ways to make significant improvements.” 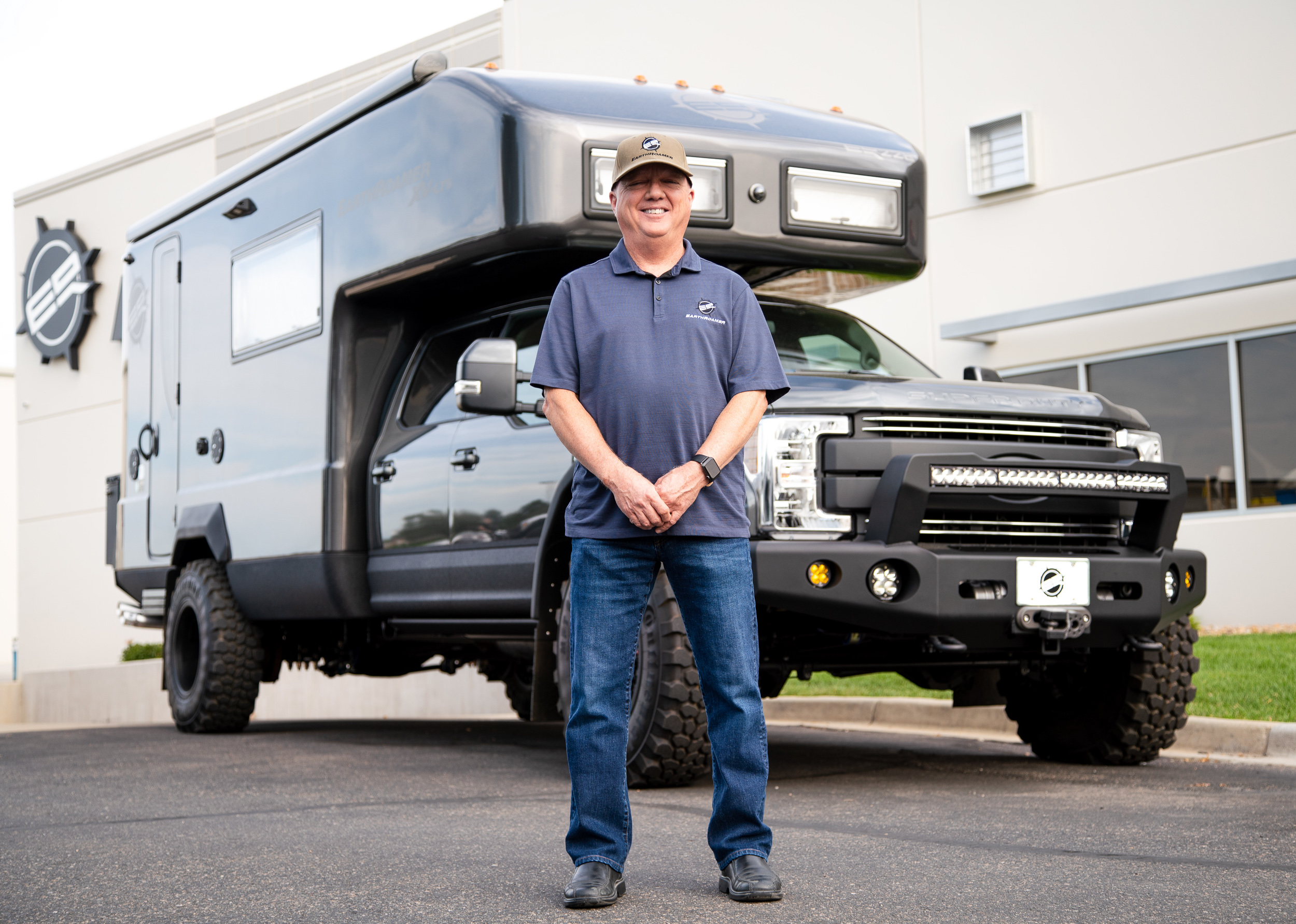 As we walked to the far end of the factory, the new direction of EarthRoamer came into view. We arrived just as technicians lowered an enormous panel from a pressurized mold. The latest generation of EarthRoamers, both the LTS and HD models, now feature living habitats constructed entirely of aerospace-grade carbon fiber formed as a solid monocoque enclosure.

“Carbon fiber allows us to reduce weight, add stiffness, and create shapes with more precision,” Swails explained. “That increased internal volume with higher ceilings, a bigger shower, and deeper cabinets. The satellite dome and awning now sink into the roofline. Our fiberglass bodies made EarthRoamer unique. Carbon fiber seemed like the obvious evolution.”

“Lithium battery cells are an expensive upgrade, but we feel they represent our commitment to building vehicles with only the best components,” said Swails. “They save dozens of pounds and don’t require any maintenance. The smaller size saves space better used for gear storage.”

Both the HD and LTI trucks have gone high-tech with a state-of-the-art touchscreen panel to manage all onboard systems. The sophisticated control center monitors power levels and automatically starts the diesel engine if necessary.

Users can operate lights, climate controls, or unfurl the awning using a paired smartphone. As EarthRoamer makes new software features available, it dispatches updates to vehicles anywhere in the world via a roof-mounted satellite link.

The Truck 20 Years in the Making

As I stood in front of the most recent HD build, the scale seemed metaphoric of the EarthRoamer business endeavor.

I remembered Swails telling me why he set out to build such superlative trucks in the first place. He told me about his long weekends 20 years ago, traveling around Colorado in a Dodge truck fitted with a slide-in camper. The more he used it, the more it conspired to self destruct.

It’s obvious he never wants his customers to suffer such disappointments. Staring at the behemoth HD, all I could see were thousands of tiny details painstakingly executed.

In an effort to design away the foibles of his first truck and camper, his tireless pursuit of perfection shaped the EarthRoamer of today. There’s no doubt that both the LT1 and HD, clad in carbon and powered by lithium, are worthy of the most protracted travels to the far reaches of the planet.

“Soon we start construction of our latest HD trucks. One customer plans to ship his to Australia, where he wants to travel across the entire country. It’s a perfect place for the HD,” he said.

Swails started EarthRoamer chasing a dream, and a big one at that. Now, his customers get to dream big too. No adventure aspiration is too grandiose for an EarthRoamer. Sure, they cost a fortune, but the experiences they deliver — those are priceless.

Up Next: Road Work: Tips to Make the Most of Your RV Office

Saving…
Road Work: Tips to Make the Most of Your RV Office
Drive, Tow, or Haul? A Breakdown of RV Classifications
×