With miles of beach and slick wet rocks disappearing under tides twice a day, the Lost Coast Trail is one gnarly ultrarun. Dylan Bowman faced those challenges last month as he set a new speed record, or fastest known time, on the trail. 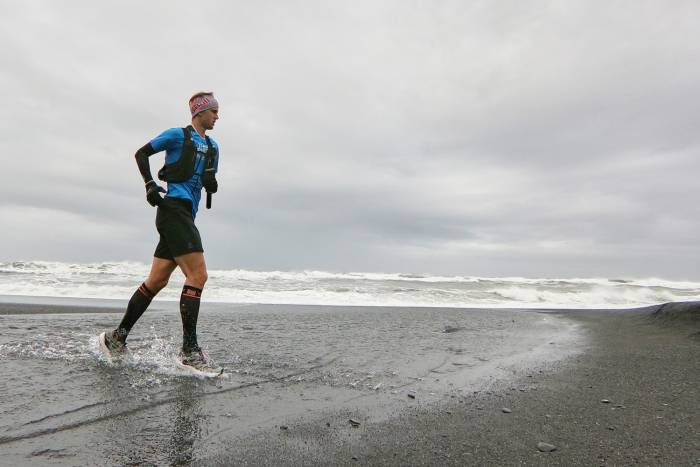 “30 minutes later, we might have been swimming” is an unlikely phrase to hear on an ultrarun. But then, the Lost Coast Trail is no normal ultra. It boasts the longest uninterrupted coastline in the contiguous United States and poses 11,000 vertical feet of climbing. And you’re as likely to see elk as elephant seals.

On March 8, 2018, Bowman established a new FKT on the 57-mile trail in Northern California, finishing in 11 hours, 12 minutes. He surpassed previous FKT holder Rickey Gates, who accompanied him for half of the trek.

The runners faced many unique logistical challenges. Several trail sections are underwater during high tide. Eight hours in, the FKT attempt found Bowman scurrying around boulders at the base of ocean bluffs with a rising tide closing in on him. Check out the video below to witness some of the risks.

GearJunkie joined Bowman and his crew in California to witness the attempt.

The Lost Coast Trail sits four hours north of San Francisco. Heading to the trail’s start, the closest thing you’ll find to a city is Leggett, a bucolic town known for its iconic drive-through redwood tree.

Wilderness thrives there. Bears, mountain lions, elk, elephant seals, golden eagles, and peregrine falcons all call it home. Once you’ve reached the coast, you’ll only encounter one road, near the midpoint of the trail, more than 20 miles away. 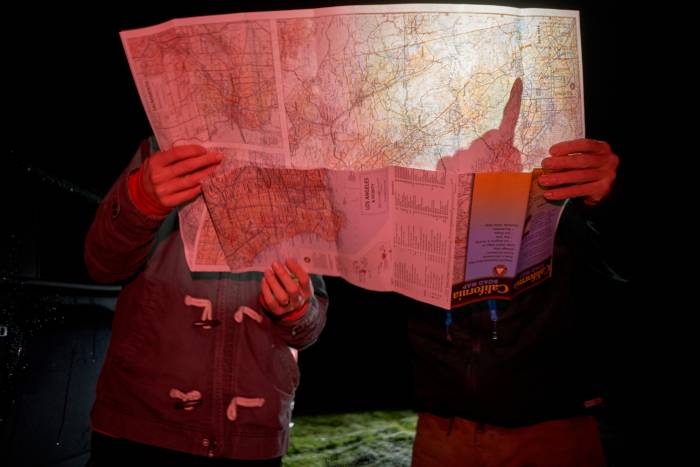 The reason for the isolation is the massive King Range National Conservation Area rising out of the Pacific Ocean. Some 68,000 acres of protected landscape keep any kind of development or infrastructure at bay.

To give an idea just how remote this place – and Bowman’s FKT attempt – is, the Lost Coast Trail actually disappears twice a day. The LCT cuts through an intertidal zone for 25 of its 57 miles, and the ocean swallows it whole during high tide.

And even though Bowman and his team planned the attempt around this factor, there remained a chance of “sneaker waves.” Although rare, these large waves come out of nowhere between high tides. They have the power to sweep unsuspecting ultrarunners out into the ocean, where healthy populations of seals and great white sharks await.

Dylan Bowman is one of the premier ultraracers in the United States. He recently won the Tarawera ultramarathon, a 100-mile race in New Zealand. Bowman has podium finishes at the Leadville 100, Western States 100, The North Face 50, and many more. 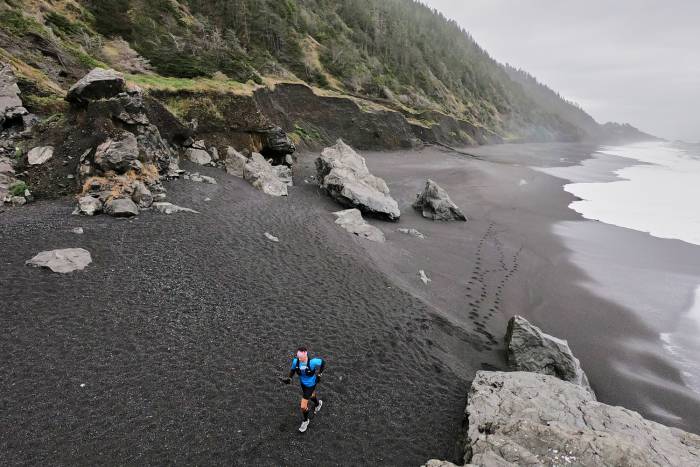 With almost a decade under his belt as a professional runner, he’s established himself as a top runner. He even helped The North Face develop its running line, specifically the Ultra Cardiac II shoe.

A resident of Mill Valley, Calif., just outside of San Francisco, Bowman eschews the overpacked drudgery of urban marathons. As he’ll tell you, he thrives on the adventure and challenge of running on trail with only himself to rely on.

And unlike the miles of crowded beaches and mansions tucked into the hillside for which California is famous, the LCT spans miles of untouched wilderness. For Bowman, that raw exposure presented the perfect goal.

“You’re out there feeling like you’re on Mars,” he told us. 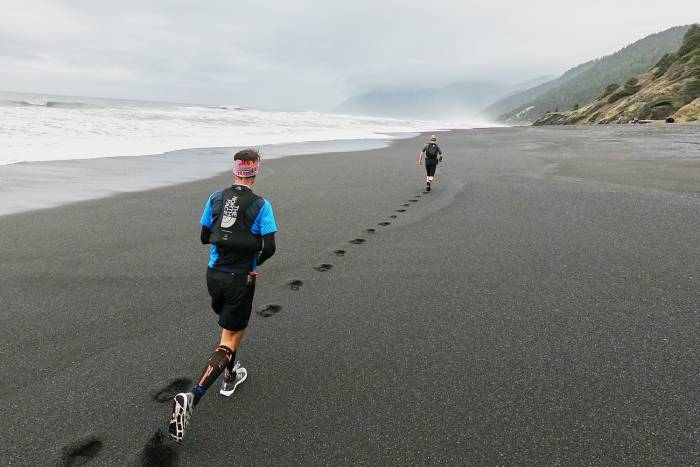 Bowman, who’s run ultras for nearly a decade, called he LCT “one of the most spectacular runs.” He said he hopes it becomes one of the premier FKT routes in the country.

At 7 a.m. on March 8, with the sun peeking over the southern end of the King Range, Bowman approached the bluffs overlooking the Pacific Ocean. Nearby, a large herd of elk grazed on the dewy morning grass. A massive bull, apparently one of the alphas, looked up at Bowman, curious as to his motives.

Already four hours into his FKT attempt, Bowman considered it a spiritual encounter. The 32-year-old still had another seven hours ahead, but by this 20-mile mark, he said it was already his favorite one-day race ever. 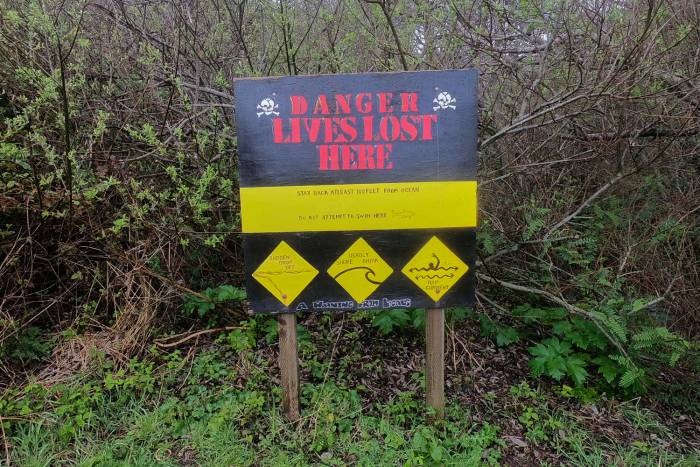 Along the southern half of the route, Bowman was no longer running on the beach. Douglas fir and tall grasses lined the coast from Usal Beach to Shelter Cove – the halfway meeting point.

Although not on the beach, it’s a tough slog where most of the 11,000 feet of elevation gain occurs. In fact, the only thing that proved consistent on Bowman’s FKT was the wet – be it from rain, puddles, creeks, or dew.

Rain made the trails slick. Because of the lack of foot traffic, getting lost was a constant danger. One estimate suggested no more than 10 people per week traverse the area. At the halfway point, myself and Rickey Gates, LCT pioneer and FKT holder, joined him.

The ground was constantly changing: small rocks, sand, and creek crossings. That’s when the going was good. Other times, the duo had to scurry up and behind rocks to avoid an eagerly encroaching ocean.

Each step felt like a small post hole. Continually planting and pushing into soft beach is a grueling type of running. I couldn’t imagine doing so for 30 miles. 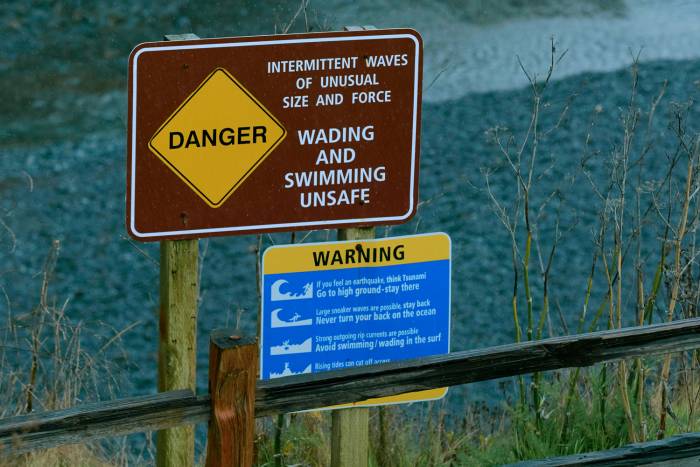 Soon, the ocean became a serious factor. As the duo ran between giant elephant seals, they raced against more than the stopwatch. The tide was rising, pushing both closer toward the bluff walls.

At one point, Gates fell on the slick rocks. The impact was jarring and painful. The pair’s isolation suddenly became very real.

“To be frank, I was a little worried about the last one,” Bowman recalled of the lapping oceanfront. Indeed, 30 minutes later they might have been swimming.

After 11 hours of continuous running, Bowman and Gates arrived cold, wet, and tired at Point Mattole. But with the exhaustion came a new FKT title for Bowman. He accomplished what he had set out to do on the taxing, remote trail.

It was a truly wild running adventure.