A race series founded by one of the true hard-men of ultrarunning is coming to Colorado to highlight air quality problems.

Jared Campbell is one tough guy. The ultrarunner completed the brutally hard Barkley Marathon – three times. He’s the only person who has ever done that.

But he’s not too tough to recognize that bad air sucks, especially for runners. He created a race called Running Up For Air in 2016 in Utah. Now, the time-for-distance ultradistance race is coming to Colorado.

Campbell trained for the Barkley Marathons in the peaks near Salt Lake City. The region is notorious for horrible smog, particularly during winter temperature inversions.

“Every time I went below about 6,000 feet, I’d plunge into this really nasty air,” Campbell said. “It got to the point that I was wearing a respirator when I got below a certain elevation.”

And when the time in his training came to do 24-hour nonstop loops, inspiration hit.

It was the winter of 2011–12, and Campbell decided to use his training as a chance to raise a few bucks with friends. He asked them to pitch in if he could complete 10 laps of his training route. And he invited them to join in on the run. 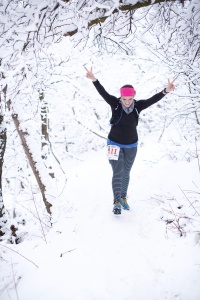 Thus, Running Up For Air was born. The first few years were just Campbell and a handful of friends. Gradually, it grew to the point that he contacted the Forest Service and made it an official event in 2016.

This year, Campbell estimated that it and a parallel event at a climbing gym, Climbing Up For Air, raised $15,000 for Breathe Utah, a not-for-profit that works to improve the state’s air.

‘Running Up For Air’ Denver

Hosted in Evergreen, Colo., just up the road from sometimes-smoggy Denver, Running Up For Air Colorado starts at a lung-busting 7,700 feet. 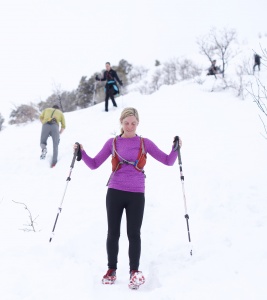 Runners will do 2.7-mile laps that take them up to 8,500 feet. There, they will enjoy views of Mount Evans and the state’s capital city. They will also most likely suffer some pain cave moments as they complete 3-, 6-, or 12-hour sessions up to Granite Peak and back down.

Organizers, Colorado-based Suffer Better ask that participants obtain pledges for their laps from friends, family, and colleagues. The proceeds go to Conservation CO, a local 501c3 organization, to support work and advocacy to improve air quality. The Colorado race will also donate 10 percent of proceeds to Breathe Utah.

Running Up For Air Colorado race takes place on March 31 and starts at 7 a.m. Learn more at www.runningupforairco.com.

Up Next: Rise of FKT: How Wild Spaces Sparked an Ultrasport