Home » Endurance » Running » Where No One Has Gone Before: 600 Miles Across ‘Crown Of Continent’

Twenty-three days, 13 mountain ranges, and only three paved roads along the way. “The Crown Traverse” is a North American backcountry route unlike any other.

IT WAS THE SECOND DAY of a 23-day trek. Mike Foote and Mike Wolfe were sketched out. “You know this is not a moment where you can mess up,” recalled Foote. “If you slipped, you’re going for a 2,000-foot fall.”

“We were on [Montana’s] Mountaineer Peak, and none of us had been over it,” said Wolfe. “There was a fresh coat of snow, and underneath was ice, and we were picking our way through this fourth- and fifth-class ledge system” in running shoes.

“The Crown Traverse,” a never-before-attempted backcountry route, was underway. 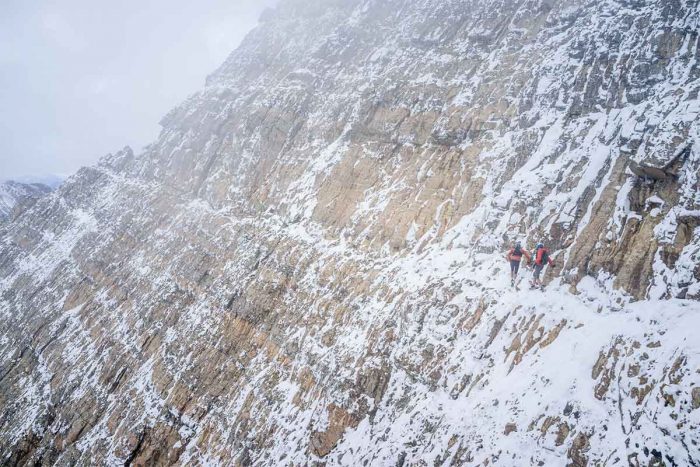 Known in the ultra-running world as “The Montana Mikes”, the duo was attempting to run, scramble and bushwhack a little-explored stretch through the mountains.

The region, spanning more than 18 million acres, is one of the largest intact ecosystems on the continent. It spans from southwest Montana north through the Canadian Rockies as unpopulated wild land.

The “Crown of the Continent” was a pinnacle expedition sponsored by The North Face last year. According to Foote and Wolfe, the intention was to run between the two points, traversing ridgelines and off-trail routes in the “most aesthetically pleasing way possible.”

Later this summer, the company will release a film of the feat in coordination with The North Face “Never Stop Exploring” Speaker Series. (See trailer here.)

We caught a screening last week in Minneapolis and “the Mikes” also stopped into GearJunkie headquarters for a visit.

The following article is based off our interview with Mike Wolfe and Mike Foote, including stories on icy ledges, busted gear, and sleepless nights along the remote way. 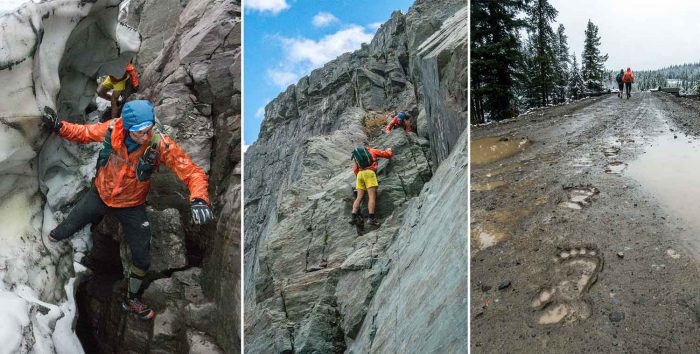 Glacial traverse (left), vertical climbs, and bear tracks… all part of a normal day on the Crown; photos by Steven Gnam

THOUGH KNOWN AS ULTRA-RUNNERS, the Mikes have a background in mountaineering. That skill would come into play almost every day as they trekked, ran, and scrambled on ridges few have ever seen.

They ran ultralight, with equipment the pair depends on during ultra-distance races around the world, 20-liter packs, and a small tent.

Still, ultralight has its price. Both Foote and Wolfe said if they were to do the journey again, “Bring More Shoes” is what they would do differently.

“I went through about eight pairs,” Wolfe said, “and I wish I would have had more.” 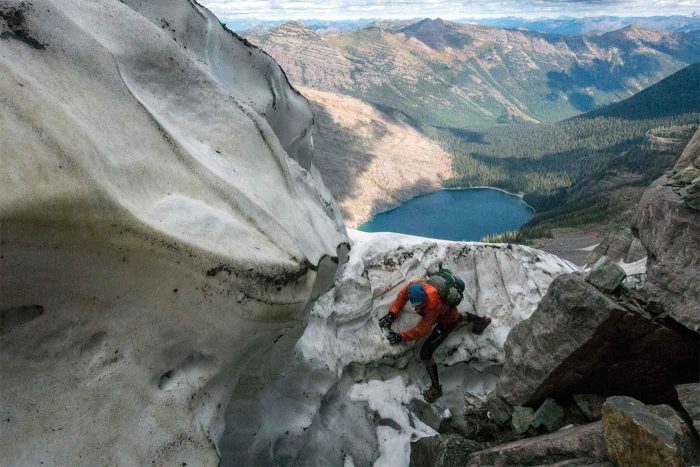 Careful footwork on a descent; photo by Steven Gnam

Wolfe noted he’d never seen terrain eat up footwear so fast. The lighter-weight running shoes he depends on, from multiple brands, were not built for the rigor of day-in, day-out mountain running.

Not to mention rock climbing. And glacial crossings. While the pair mapped out their route overall at the beginning, each day brought fresh challenges to find a line.

This meant climbing vertical cliffs and traversing ledge systems (without ropes) on snow. “Our climbing background was key,” Wolfe said.

On one peak, the pair planned to glissade an immense snow field. However, poor conditions required a painstaking down-climb through melting ice caves where crampons would have been nice.

A support van followed the route from a distance, meandering around the mountains on rare roads. The team was able to meet up with the vehicle every few days.

But most nights were spent in the backcountry, where Foote said he was often cold and had trouble sleeping.

“I had two sleeping bags and a small pad,” he noted, “and for weight, I often grabbed the lighter sleeping bag; next time I would bring more warmth on those nights.”

The tent, the O2 model from The North Face, on the other hand, was a good choice. Foote said it was bomber, and at 1 pound 5 ounces, it’s lighter than two bivy sacks.

The duo tested a prototype jacket from TNF, a “permanent beading” shell that would become the HyperAir GTX. Foote commented on its durability, as the thin jacket held up to bushwhacking for miles on the route.

Beyond gear from their main sponsor, the team used 20-liter Ultimate Direction running backpacks, Therm-a-rest pads, and shoes from Salomon, Nike, and others. “It was a two-week gear test,” Foote said, noting that most of his picks performed over the entire trip.

Their packs weighed about 30 pounds when loaded with water and food. Sustenance consisted of “anything high calorie,” including Oreo cookies, potato chips, nuts, bacon, and meat.

“We tried to eat oatmeal for breakfast but it just did not do anything,” Foote said. The pair gave oats up for denser food each morning. “We just needed to crush thousands of calories a day.”

High ridge traverses made water rare. The pair had to descend thousands of feet at times to access a mountain stream or lake, sucking water through a Sawyer filtration straw and then stashing H2O in their packs before moving high again.

They built a rhythm. The days blended together, September wore on, and as they got further north the cold set in. “We were wet and cold a lot,” Foote noted, and a mantra of “eat and move, eat and move” took over as they ticked away the miles and the mountain ranges.

At the end of the trip, when Foote, Wolfe, and photographer Steven Gnam (who joined them for much of the route when not nursing injuries) finished after 23 days, they plopped into some chairs in a Banff parking lot. Wolfe checked his DeLorme GPS Tracker, which recorded their trip.

So, the trio wrested themselves up and ran around the town until the total read 600 even.

–See the trailer for ‘Crown Traverse’ and get the full scoop on Foote and Wolfe’s The North Face feature page.

Up Next: Watch: Trail Run With Bronze Medalist Emma Coburn