Two friends head out on an ambitious day-long run, the 26.5-mile ‘Four Pass Loop’ in Colorado’s Maroon Bells–Snowmass Wilderness. Ahead are hours of effort and thousands of feet of vertical gain.

Very little light has crept into the sky as my good friend Kristin Zosel and I, Meghan Hicks, greet each other with a still-sleepy hug in the trailhead parking lot. What light has arrived is yellow, the precise color that the sun burns into your eyes if you make the mistake of looking straight at it, and it is pressing its way across the electric-blue sky of waning night.

Tall, black silhouettes looming up from the ground are the giant mountains that surround us. We meet this morning to run the famed Four Pass Loop in Colorado’s Maroon Bells–Snowmass Wilderness. It’s a 26.5-mile loop outside Aspen that features a bold 8,000 vertical feet of climbing (and as much descending), largely through high-altitude, alpine terrain.

We head up the trail where a rock garden greets us for the first stretch of running. Our feet tap a staccato rhythm on the small spots of bare earth between the rocks, and our knees rise high to lift our legs over the obstacles. Our arms swing hard, instigating more forward propulsion than normal because our legs are busy with tasks beyond just moving forward. Moving requires the full attention of our minds and bodies, a natural wake-up call. 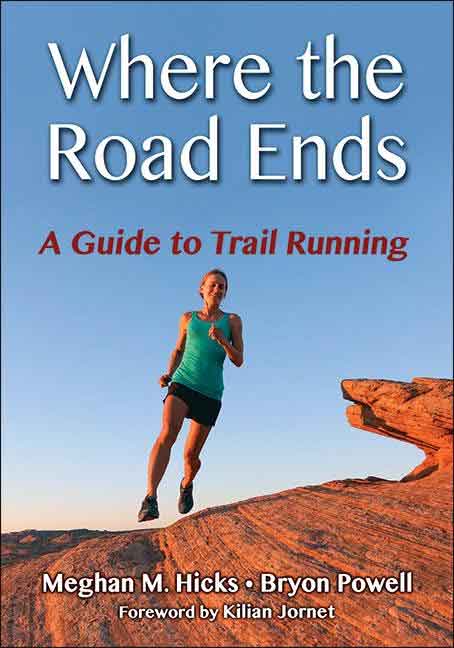 The trail leads to Crater Lake, its surface a perfectly still mirror that reflects everything: the conifer trees on its shoreline, North Maroon Peak and its companion mountains glowing pink in alpenglow, and a pale blue sky containing poofs of white clouds. We stand silent for a moment before jogging on.

We turn left at the trail junction and head up the West Maroon Creek drainage on a well-established trail that traces the valley bottom uphill. Here and there the trail is briefly muddy. I concentrate on making sure that my feet land right beneath me and straight into the ground so that the lugs on the soles of my shoes can grab the gook. With a little attention, good traction comes easily.

Kristin and I alternately jog and powerhike up the large valley. When the trail steepens, our heart rates spike, and we temporarily slow to a powerhike. As the trail moderates again, we switch back to a jog. Our bodies naturally seek the most efficient way to move across the dynamic terrain. The hillsides are choked with wildflowers—Indian paintbrush, lupine, and dozens of other species. Strokes of red, purple, yellow, and orange flash up the hillsides before giving way to the coral pink and rust-colored bare cliffs above. Simply said, the scene is stupendous.

We reach the first of the four namesake passes on this loop, West Maroon Pass, which acts as the topographical divide between two drainages. We’ve watched the clouds grow big and gray, expanding from separate units into a continuous layer. At the top of West Maroon Pass, we see an ominous curtain of rain falling a couple miles off and headed our way. We stop for just a moment—to take photos and don our rain jackets—before bulleting downhill.

Raindrops come first; they patter gently against my jacket. Then tiny pieces of hail begin to tap Morse code on my hood. Next comes a soaking rain. But just as the curtain of rain envelops us, we see through to the other side. The rain ends within 15 minutes, just long enough to soak our shoes.

The second pass, Frigid Air Pass, comes unexpectedly fast. At a little pond, the trail makes a quick, signed jog to the right and then pitches into the sky. Just a half mile to the top, the steep grade forces us to hike every step. I remind myself to inhale deeply with each breath to give myself access to as much oxygen as possible and to engage my core muscles, which act as the support structure for this hard work. We leave the bounty of wildflowers and ascend through rocky terrain devoid of nearly all vegetation.

Another trail runner climbs the opposite approach to the pass. We watch him tackle the switchbacks with command. He mostly jogs, although occasionally he switches to a powerhike for a couple steps, pressing his hands down on his thighs to add extra, upper-body oomph to each step.

In the valley after the pass, we encounter one backpacking group after another, maybe 75 people total over the next 10. We also intersect another pair of trail runners sauntering together. The Four Pass Loop is a mecca for outdoor enthusiasts of many kinds.

The 2,000-foot climb to the third pass comes in what seems like two giant stair steps. First, the trail steepens as we snake up a forested hillside on switchbacks. Just past tree line, the grade flattens as we meander past another unnamed pond. Trail Rider Pass is now in view, a V dipping into a ridge of rocks maybe 800 feet above us, the second of the two big stairs. In the nook of the V, humans who are already up there appear as wee dots, like ants.

Up Next: Stairway To Hell: Vertical Tube Race Is Insane