Home » Endurance » Running » Kyle Richardson Sets an FKT in the Flatirons, Tells All

GearJunkie caught up with Kyle Richardson to talk about his deep relationship with the Flatirons, the Quinfecta FKT, his training, and more.

Some of the best mountain athletes I’ve ever met are rather unassuming. They never willingly talk about their accomplishments and only discuss them when asked. Even then, they don’t brag or boast.

Competitions don’t really motivate them, but, if need be, they can throw down with the best of them. The desire to work hard and improve comes from a deep love and respect for their sport.

Kyle Richardson is one such athlete who fits this bill. If you’ve ever spent time up and around Boulder’s Flatirons, you’ve surely seen him running and scrambling around shirtless.

After years of playing in the Flatirons, on September 1, Richardson set the fastest known time (FKT) of 1:46:22 at the Flatiron Quinfecta, a linkup of the five Flatirons.

I caught up with this Black Diamond- and La Sportiva-sponsored mountain runner to talk about his deep relationship with the Flatirons, the Quinfecta FKT, his training, and a pretty damn cool pair of custom La Sportiva shoes he used. 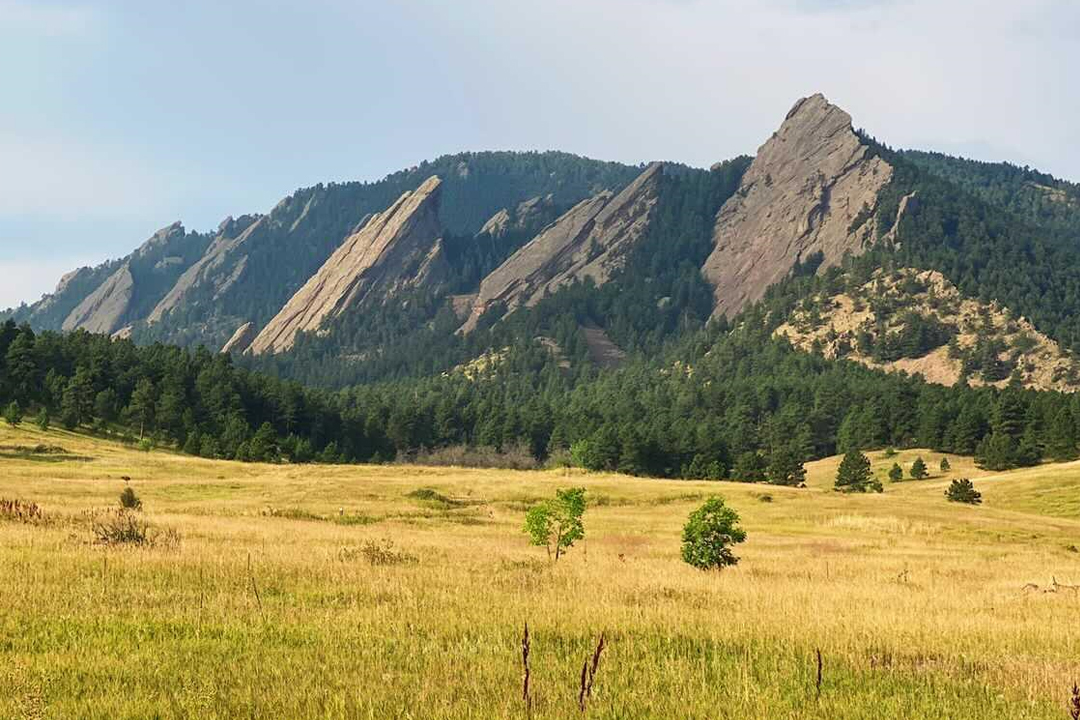 GearJunkie: I’d like to hear about your relationship with the Flatirons. What makes them so special to you?

Richardson: The Flatirons are the ultimate playground where you can combine running and technical scrambling and climbing. It’s a place where you can really flow between those two disciplines and make them into one. Whereas in other places around the world, it’s like ‘okay I’m running, and now I’m climbing.’

The Flatirons are so low angle that you can honestly run straight up into them and it just feels like a natural continuation of the movement. That’s always been something that’s drawn me towards exploring and spending lots of time there.

How’d that day go? Did you know you were going to try for the FKT that morning?

It wasn’t something that I had on my radar at the beginning of summer, but on Monday I had looked at the forecast and saw that Wednesday was supposed to be overcast. I was like, I’ll loosely plan on Wednesday to go for a time trial but ultimately, I’d wake up that morning and decide.

I tried to get up pretty early so it would be pretty quiet up on the rocks. Oftentimes, roped guided parties will get an early start, so I didn’t want to have to be navigating around roped parties.

I hopped on my bike and was up at Chautauqua at 5:30 in the morning. I did a little warmup and thought, I’ll just go for it. It was still dark out, so it can be hard to convince yourself to go for an effort like this because it’s a little daunting, and you know it’s going to hurt. I figured, let’s just run as hard as you know how to run and try your best.

Ultimately, that’s all you can do. So, it wasn’t about the record but more of trying to bring your best effort to the landscape. 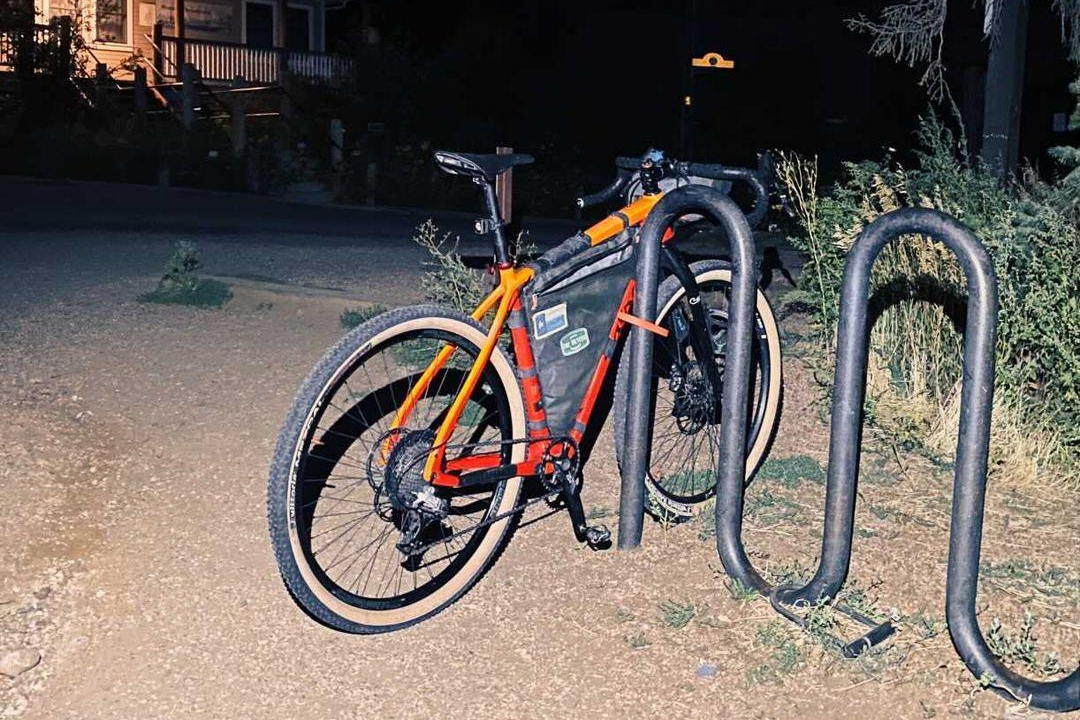 The start and finish are at Chautauqua at the ranger station. The total route is just under 5 miles with 4,500 feet of vertical gain. So, pretty steep. For each Flatiron, you start at the base and go to the top, any way or any route that you want.

It’s up to the person because there are many different routes varying in difficulty and how direct they are — the only exception being the Third Flatiron.

How difficult is the climbing?

The only time you’re going up, you’re on fifth-class terrain that’s 45 to 50 degrees.

Depending on how you want to optimize your route, you can take slightly easier lines, but I tried to take pretty direct lines that required a little bit of 5.7 scrambling. It’s technical but not too steep. Where you’re on your feet, there’s always holds or something to put your feet on.

Really, it’s a game of footwork; it’s not straining, you’re not pulling on holds. It’s being able to read the rock and figure out there’s a steep section up ahead, but there’s kind of a contouring line that’s a little bit lower angle that seems more featured. 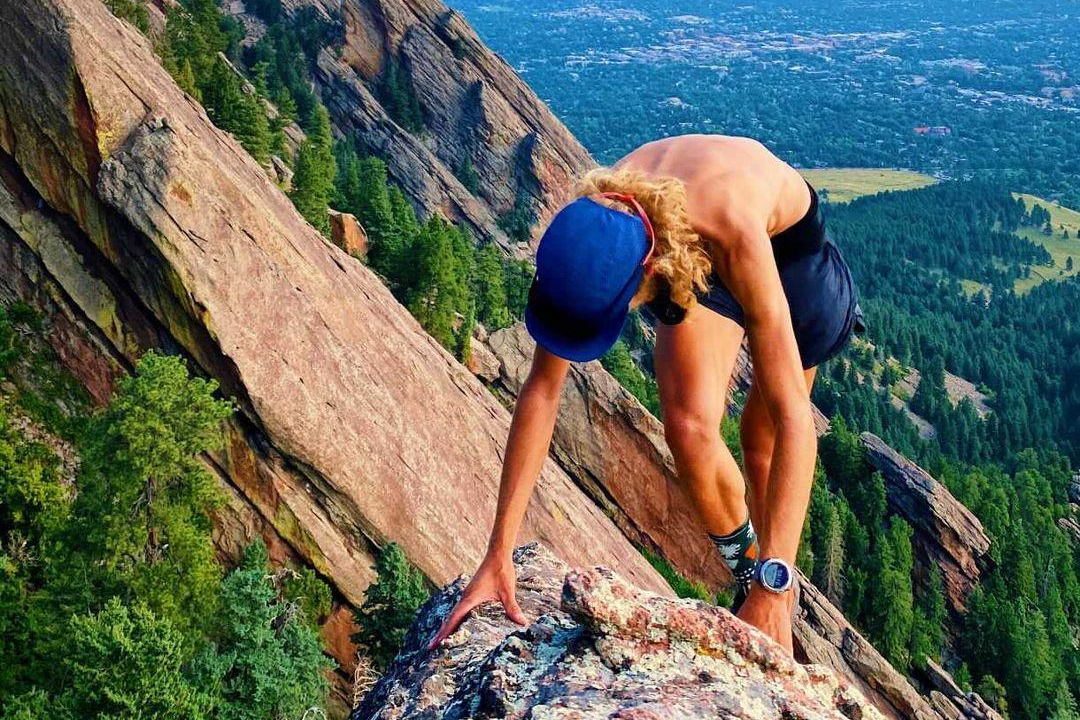 Have you ever had any close calls up there?

No, I’ve never had any sketchy moments. Not to say that that can’t happen. I know that happens all the time, but I got into it super slow.

How did you go about training for an objective like the Quinfecta FKT?

I feel like in some ways I’m always training for this kind of effort and the more technical aspects of mountain running.

While this hasn’t been an objective that’s been over my head, it’s something that I occasionally will revisit, given my history with it and coming so close to the record 3 years ago. In terms of training, I did the exact same route five times in 2 weeks to just redial it and relearn the nuances of some of the routes, and the connections between each one.

Over the years, I’ve spent more and more time learning the landscape and testing speed on numerous different routes. I feel like that brings out a certain level of focus that’s hard to achieve when you’re just kind of going casual.

Still, it’s not so much about chasing records or chasing a fast time. It’s more of a certain experience that I find really fulfilling and rewarding.

What type of shoes did you wear?

I wore a pair of La Sportiva Kaptivas I use for time trialing and racing in the Flatirons. I got them half-resoled with dot climbing rubber on the front.

I think it’s actually unparalleled rubber, if people want to geek out on the specifics. With dot-climbing rubber, it almost feels like cheating. It’s like Velcro on the rock. 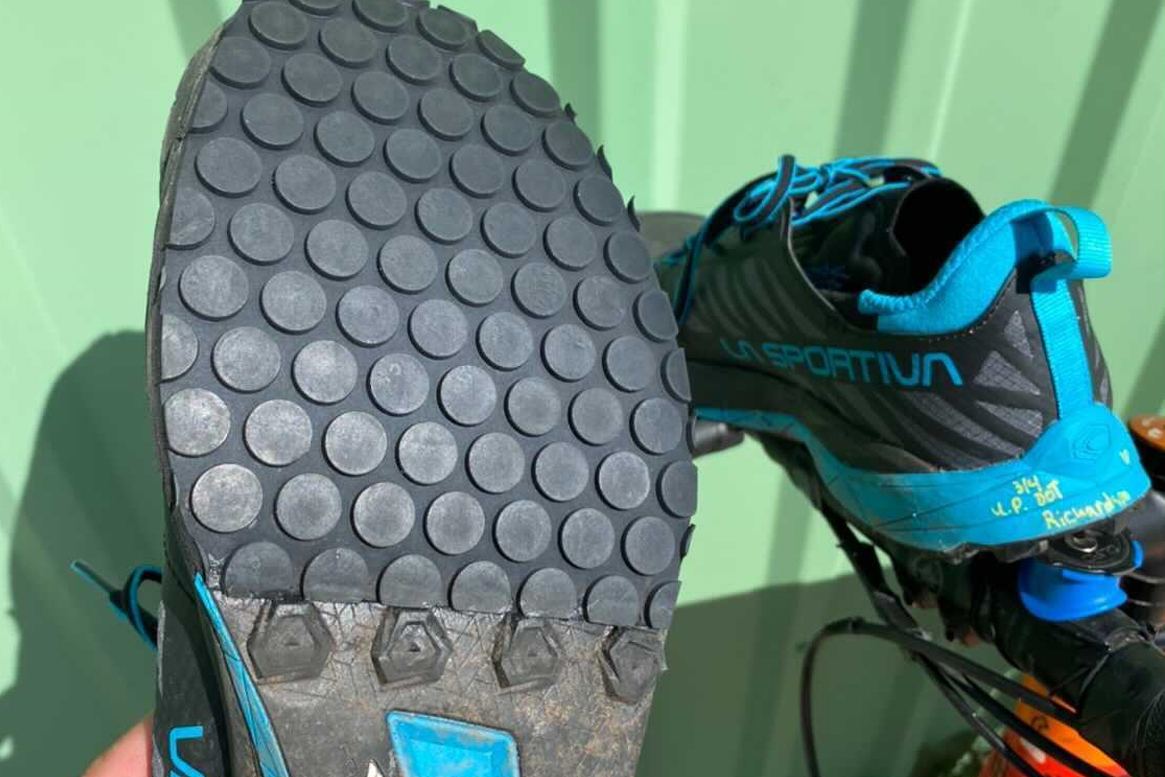 What advice would you give someone who was interested in this style of technical mountain running?

I get lots of questions about this and it’s hard for me to be like, ‘Oh, you should do this or you should do that.’ Ultimately, it helps to have mentors. And really just take it slow. There’s no shame in bringing ropes.

I remember the first time I climbed the First Flatiron, I brought a rope. People think that if you’re not doing it without ropes, it’s not the same thing. But, it is the same thing. It’s just different; one way is not better than the other.

I want to make that clear because people often think that in order to feel a sense of achievement, they need to do it in the same way that they saw someone else do it. And that’s just sort of unrealistic.

What’s next? Any big plans this fall and winter?

I’ll be doing the Tour de Flatirons, which is a 5-week-long time trial scramble we do here in Boulder. In terms of other objectives, my buddy Michael and I have a couple of loose linkup objectives in Eldo and the Flatirons. One of them is called the Top 10 Classics in the Flatirons.

Gerry Roach is kind of the Flatiron OG that wrote the guidebook that has all the 53 classic Flatiron scrambles. And he designates 10 of them as like the top 10, ranging all the way from the First Flatiron down to Eldo, like some of the formations down south. There’s a record where you link up all 10. It’s been done solo and as a partnership.

I think I’m curious about doing that with a partner and bringing a rope because there’s more technical vertical climbing versus kind of scrambling.

Up Next: Arcade Parkour! Freerunner Pasha Petkuns Pounces Around in ‘Human Pinball’