Ultrarunner Scott Jurek broke the record for completing the Appalachian Trail. Park officials in Maine were not happy with how he celebrated.

After a display of physical, mental and emotional fortitude, Scott Jurek was publicly scolded by officials of Baxter State Park, the terminus of his record-setting hike in Maine. (See our coverage, “Scott Jurek Breaks Appalachian Trail Record.”)

For what? For doing what many of us do when celebrating a major milestone — popping a bottle of champagne, taking a drink, and allowing himself to be applauded by a group of people who admired his accomplishment.

But the park took another view, and it is juvenile, tacky, and likely inaccurate. 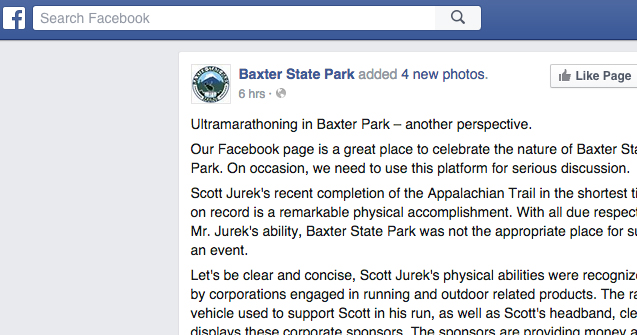 In a post titled “Ultramarathoning in Baxter Park – another perspective,” Baxter Park Director Jensen Bissell bashes Jurek for alleged littering, drinking alcohol in public, and the display of corporate sponsors. The media in attendance were also cited for filming within 500 feet of Baxter Peak (Mount Katahdin), according to the post.

The entire post is on page 2 of this article.

We at GearJunkie are disgusted, not with Jurek, but with the actions of the park, particularly with the public “shaming” of Jurek.

A public official took it upon himself to castigate Jurek in public. Mind you, he’s not yet been found guilty of his “crimes.” This would be akin to a police officer writing an angry blog post about a person he’s cited for a parking violation.

Beyond the champagne, the park charged people in the group with “illegal filming.” We are staunch advocates of the first amendment, and have long fought for the rights of photographers and writers to cover any event on any public location, regardless of jurisdiction.

Baxter State Park may not be a “federal” park, as the official pointed out, but it is part of the United States and the Constitution still applies. That any park will fine an editorial photographer documenting a major news event is unconstitutional.

The rest of the noted citations given to Jurek are silly in our opinion, but possibly justified by the park. The public scolding on social media? Not in the slightest.

Jurek declined to comment for this article. He understandably doesn’t want to spread the park’s message, but this issue is bigger than a single through-hiker.

Jurek is the kind of man who leaves the trail cleaner than he found it. He is the kind of runner who, after winning an ultra-marathon, waits at the finish to cheer every last competitor across the line. He is, in short, a true steward of the environment, and his accomplishment on the AT is bringing much needed attention to the world of outdoors sports.

Baxter State Park has chosen to publicly air a grievance, writing as if Jurek has been tried and found guilty. Commenters on the original post, some of whom were at the scene, recalled that of the people who celebrated with Jurek at the peak, many had come to watch history be made. Here’s how one woman described it:

I was on the summit when Scott Jurek arrived on Sunday, so my perspective may be a bit different than others. I had my trip planned for months in advance, and although I am a fan of Jurek and followed his trek, it was only by pure accident that we were there the same day. I’ve lived in Maine all my life, and this was my first hike all the way to the summit of Katahdin – and it was amazing. The pristine beauty is impossible to describe. When we reached the top there were 25 or so people who had also summited that day, and many were waiting for Scott Jurek’s final ascent, and we decided to wait too. While there, we watched a couple take wedding photos in full wedding gown and dress blues. We spoke with a gentleman who was carrying a fallen soldier’s stone for The Summit Project. We had lovely conversations about running, hiking and the amount of endurance and internal fortitude that it would take to complete an AT trek in 46 days. It was calm, peaceful and great to connect with people from all over the world. It wasn’t rowdy, loud or disrespectful. There was a lot of excitement when Jurek made it to the summit, and I would expect there to be. It didn’t take away from the beauty of Katahdin, and even Jurek commented on how stunning the area was. The champagne was a celebration of a long test of endurance, and he deserved every sip. Just like MANY hikers deserve their celebratory beers when they reach the summit. Yes, it ‘s against the rules, and maybe Jurek deserves the citation…but it happens all the time. It was not a party like BSP is describing it. He opened a bottle and then sat down to answer questions. I’m also surprised he was cited for having more than 12 people in his party. I watched them arrive, and I didn’t think there were even that many – but regardless, they were close friends and they deserved to share that achievement with him. All the people you see in the picture that BSP posted were NOT in his hiking party – that was the total of people who had hiked up independently, and the ones who had hiked with Jurek. The picture BSP posted is quite misleading. Overall, watching Jurek accomplish this awesome feat made my first summit of Katahdin all that much more special – it was incredible to witness, I felt honored to be there and it did not detract from my experience at all. I will summit Katahdin again someday, but I don’t expect any summit experience to ever be so memorable as my first.

We are disappointed with the leadership of the park. While we do believe in upholding the law, publicly smearing an athlete’s accomplishments for minor infractions is wrong.

We know Scott Jurek, and he is an upstanding advocate for the environment and responsible outdoors recreation.

When Jurek arrived at the summit in Baxter, he was greeted by about 20 people, opened a bottle of champagne and celebrated for what we would imagine was a half-hour of laughs with friends and strangers.

The park does indeed have a duty to protect the wilderness experience for park visitors. But when a once-a-decade opportunity to celebrate a remarkable achievement arises, officials ought to embrace, not condone, the occasion.

If you’d like to join the voices calling Baxter State Park out for their behavior, they’re right here on Facebook.

Up Next: World’s Coolest Aid Station Is Above 13,000 Feet