‘I for sure launch full psychological warfare during a race.’ – Oz Pearlman 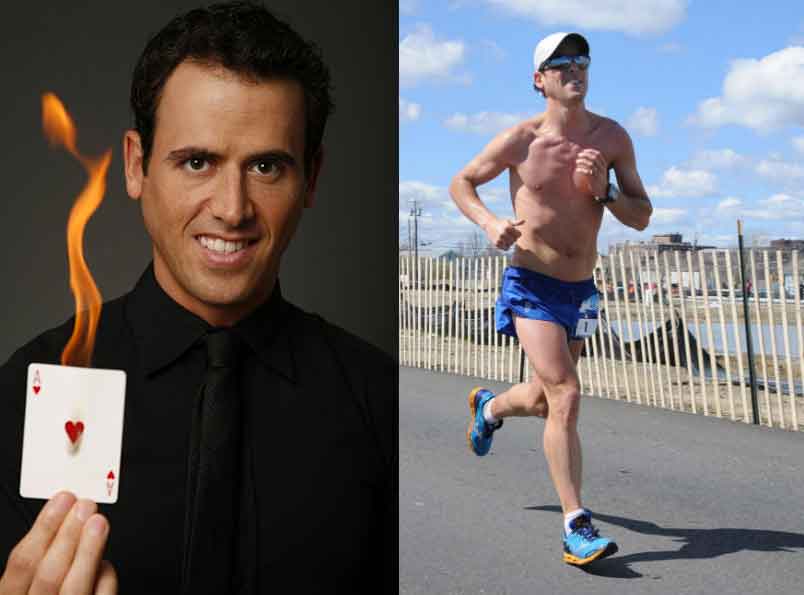 There are many ways to improve your marathon time, but have you considered ‘mentalism’? We learned some psychological tricks to break the tape at your next race from famed mentalist and distance runner Oz Pearlman.

In 2005, Oz (pronounced “Oh’s”) Pearlman quit his job on Wall Street one year after launching a Broadway show that dazzled audiences with his seeming ability to read minds and predict people’s actions.

That same year he tried his first marathon, and it changed everything. 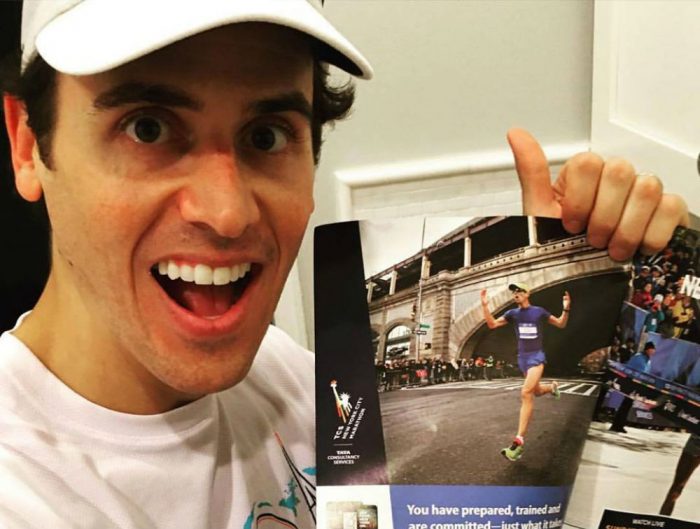 “I love competition, I absolutely love it – and it was totally lacking in my nine-to-five,” he said. “That race was awful. A complete debacle of crying, and walking, and agony,” he said of his first marathon.

You wouldn’t know that now. Since that first race, Oz completed the Ironman in Kona, won the New Jersey Marathon four times, the Hamptons Marathon three times, and, most recently, won the Long Island Marathon with a time of 2:25:23 (see picture below).

The Science Of Mentalism

As it turns out, mentalism, arguably a real word, is half showbiz and half science. And that science can be used to gain a competitive edge. But what is mentalism?

“Unlike magic, which is visual illusion and sleight of hand, mentalism is more about reading and understanding people,” Oz told us. “The effect is in the mind, not the eyes.”

For example, go around and ask a bunch of people to pick a number between one and 10. “If you pay attention, you’ll notice most people pick seven,” he said. “If you keep at it, you’ll pick up all sort of cues that people give off that tell you what they’re thinking – who’s shy and picks four; who tries to fake you out and thinks one; who’s the random outlier that thinks nine. It’s all there.”

Pearlman’s shtick is all about focus and attention. Knowing his tricks offers control and insight into how people behave, which gives you an advantage at your next race.

Train, train, train – that’s the number one key to being physically able to go the distance. But, as Pearlman notes, “Training is absolutely most important, but if it’s not fun, you won’t do it.”

The key to effective training? Visualize each training session like it’s a race. The high of racing goes a long way to boosting performance, but that same high can be used to train harder and more effectively. Visualize yourself in competition, or better yet, train with a partner and race each other. Control your mindset and you will maximize your fitness.

The cardinal sin among endurance athletes is thinking about the miles to come. “It’s the worst thing you can do,” he warns. “If five miles in you start thinking ‘Oh god, I’ve still got 21 miles to go,’ it’s over.”

Best advice? Compart’mentalize’. Your training will handle the physical side; your job is to focus the mind. “Stay in the moment and assess what’s wrong. Small increments, mentally and physically.”

Don’t run the marathon, just run the next mile.

The real magic to competition is appearing stronger than your opposition – that is an invaluable mental edge that often makes a real difference.

“I for sure launch full psychological warfare during a race,” admits Oz. “I will congratulate people I pass, or give them a smile and thumbs-up – anything to make them think I feel better than I actually do.”

Think about it, being passed sucks. Being passed by someone who’s happy and running effortlessly is demoralizing, and that can be the straw that breaks a runner’s will.

Ultimately, your state of mind is the number one ally and obstacle in endurance athletics. The body will adapt to near anything and there are a thousand and one resources to get stronger.

The mind can adapt as well, but it takes focus. Control your fitness – don’t train to train, train to race. Stay present, avoid the race ahead and focus on what you’re doing. Play the game, including bluffing your opponents, which is well within the rules.

The little tricks can add up to better finishes. After all, as Oz says, “It’s all mental.”

–Learn more about Oz Pearlman the Mentalist on his website and track his upcoming races on Twitter.

Up Next: Trail Runner Suspended For Doping In UTMB