Coloradan Megan Kimmel won the summit sprint to 14,115 feet (and back down) in 4 hours, 15 minutes, 4 seconds at the Pikes Peak Marathon over the weekend. And she broke the women’s course record that had stood since 1981.

Kimmel, 38, had the high-altitude conditioning required to smoke the field. She lives and trains just three hours away in Ridgway, Colo. The mountain town sits at 6,985 feet. The thin mountain air suits her, she said in a press release.

Kimmel reached the summit of Pikes Peak in 2 hours 42 minutes. As she told the press, she didn’t rule out a win, but she was more focused on keeping a healthy pace. Well, at least until she heard someone say she could beat the record if she kicked up the pace.

With 1 mile to go, Kimmel went all out and bested the longstanding record by just 14 seconds. It was the 14th-best overall time.

The feat was especially impressive, given that Kimmel had just competed in the Swiss mountain race Sierre-Zinal the week prior. And she was in new shoes. Kimmel raced in a prototype version of the S/Lab Ultra from Salomon, which sponsors her.

Laura Orgue of Spain came in second, 15 minutes behind Kimmel. And Pikes Peak Marathon defending champion Kristina Marie Mascarenas settled for third this year in 4 hours 37 minutes even. On her way to the podium, Mascarenas added to the women’s course archives with the fastest downhill time ever run by a woman.

Downhill History in Men’s Marathon Too 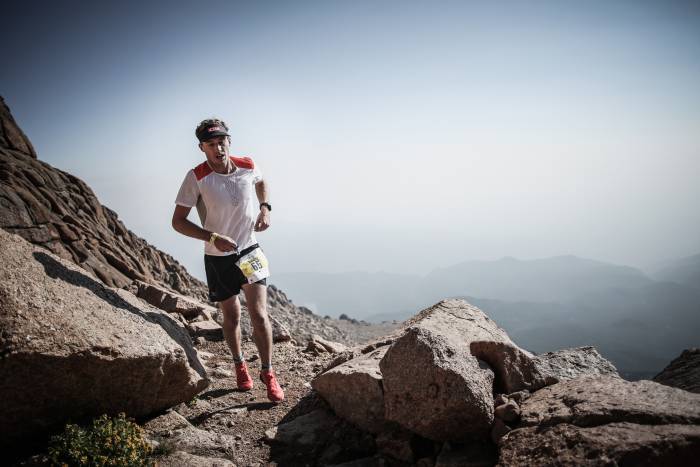 Jones did that after riding his bike 250 miles from Durango, Colo., to the Colorado Springs race to raise funds for Protect Our Winters.

In the press release, he said it was “fun to come out here as a Colorado boy and represent.”

Hats off to all the stunning performances at this year’s Pikes Peak Marathon. And special kudos to Megan Kimmel for pushing through to put her stamp on a longstanding record!