Tiny gaps on the edge of the sole give a glimpse at the technology inside. Its upper is intricately manicured, balancing running-shoe performance with street style. 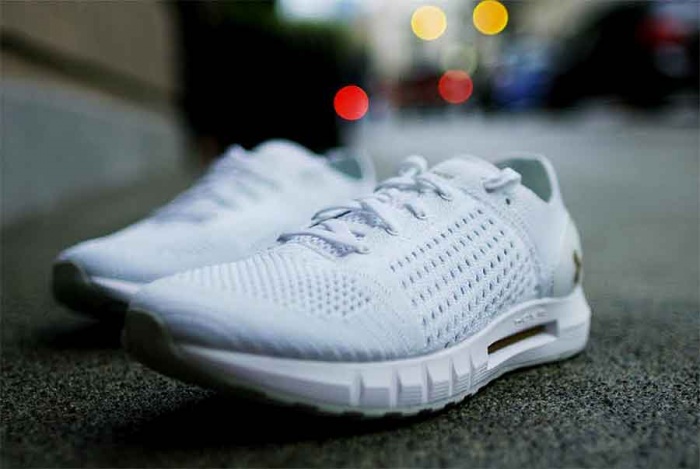 Under Armour this week took the curtains off a project in the works for more than two years.

We visited the brand’s just-opened Portland, Ore., facility (located in a remodeled YMCA just south of downtown, running track included) to see a new take on footwear for running.

The technology is called HOVR, and Under Armour touts that it offers a new realm in comfort and energy return. This means the shoes will cushion and give better perpetuation of energy as you stride, Under Armour states.

A new kind of midsole made of olefin was designed by Dow chemists. It’s called UA HOVR Foam, and it’s a lightweight alternative to commonly-used EVA foam.

That proprietary foam is encapsulated in material the company calls an “energy web.” The package (foam plus the external “web” material) is the heart of the HOVR technology.

The brand notes the web helps “maintain the midsole’s shape and, in return, delivers strong responsiveness and energy return.”

This combination, Under Armour states, lets the shoe absorb “some of the impact your body would normally feel, aiding in your comfort and keeping your legs fresh.”

The line includes two shoes in men’s and women’s models, the HOVR Sonic and HOVR Phantom. The former is a shoe, while the latter (Phantom) is more a mid-top with a knit collar around the ankle.

Influence for the Phantom’s upper comes from bike shorts. Yes, the company notes the 3D-molded material has more in common with a bike chamois (pad) than a traditional upper.

This results in a futuristic look that also seems to take cues from the basketball court. Indeed, the Phantom is the more superlative shoe in the line and will turn heads as you jog city paths.

“We could not have built this shoe in a normal footwear factory,” said Topher Gaylord, SVP/General Manager of Outdoor at the company. “The HOVR design links to Under Armour’s roots as a performance apparel company.”

On the Sonic (the low-top shoe) the upper is a svelte knit material. The shoe comes in black and white, and the knit provides subtle support and great breathability.

With both models Under Armour markets better energy return and padding when your feet pound on pavement.

I took a pair for a run along Portland’s waterfront for a first review. It was a typically rainy Pacific Northwest November day.

The stark-white Sonics popped off the dark pavement but quickly became splotched with gray after puddle-hopping toward the trail.

As promised, the shoe delivered comfort and responsiveness. The longer I ran the more I appreciated the shoe—the HOVR tech is a notable new platform upgrade for pounding miles on pavement.

They feel comfortable and pad each stride but are not sluggish. I would wear these shoes for training as well as 10K and longer race events.

Both shoes have a sensor in the sole. It measures distance, cadence, pace, and other stats, and stores them to sync with apps later.

The sensor system is in current Under Armour shoes as well. It works independently of a phone. In other words, you don’t need to tote a phone along during a run.

Once your run is complete, the shoes sync via Bluetooth to a MapMyRun app on your phone.

You download data from there to keep track of metrics and workout stats on a personal page. It’s a slick system we have used with other UA shoes this year.

I look forward to pounding more miles in the HOVR line and will update this story as our review progresses. For now, with about 10 miles on the shoes, the HOVR has proven to be a nice ride.

–Get updates on HOVR and its 2018 release schedule here.

Up Next: Beef Jerky Store Opens In Minneapolis, First In US