We competed against an Olympian, an overland industry expert, and a host of top automotive journalist talent in the media wave of the 2021 Land Rover TReK competition. And we came away victorious.

As the morning fog lifted off the nearby pond, I found myself dragging heavy oak planks with two teammates. We were building a bridge deck over a creek, which was also a puzzle with the Land Rover logo on it. The bridge had to support the fully kitted-out, bright-orange Land Rover Defender that was our adventuremobile for the day, and we were on the clock.

We had already navigated and run a few miles to find our Defender 110 and completed a difficult trailering challenge. So we were already huffing and puffing only an hour and a half into the 6-ish-hour competition. Even though we barely knew each other, we worked as a tight team and managed to complete the task in record time.

The stopwatch stopped and we were off, bouncing down a rough forest path toward our next challenge. 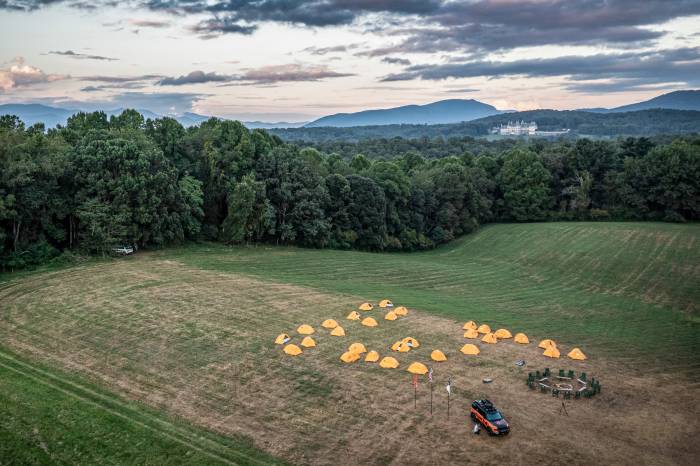 All of that was the start of the competition day of Land Rover TReK 2021 for Team No Time To Cry (Bond reference). The team consisted of Jeff Glucker of Hooniverse, Tommy Mica of The Fast Lane, and myself. Land Rover PR put our team together, as well as five other three-person media teams. We were on the media wave of TReK 2021, competing before the Land Rover dealer teams started to roll in the next day.

While it lacks the grandeur of the Camel Trophy, the TReK competition is held in its spirit and on the no-doubt grand Biltmore Estate in Asheville, N.C. Land Rover specifically designed this event to experientially impart the brand’s signature adventurous off-road lifestyle to its dealer personnel. Seventy teams of three from dealers across North America competed in Land Rover TReK 2021, the largest field ever for the competition.

Land Rover said, “TReK allows [the retail staff] to experience the guts of Camel Trophy, the adventure of a genuine expedition, the freedom of exploring the unknown, the individualism of pushing oneself to the limit, the supremacy of competition, and the authenticity of the Best 4X4 X Far.”

The TReK competition started back in 1996 in the U.S. and has gone international. But the event has taken place only a handful of times since. Very few media have ever participated, so it was an honor and privilege to get the invite for this year’s media wave.

“We’re thrilled to be able to bring the TReK competition back this year for all of our Land Rover retail staff across the U.S. and to give them the opportunity to not only learn but to experience firsthand what the Land Rover brand represents and utilize the New Defender to its fullest capabilities,” said Joe Eberhardt, president and CEO of Jaguar Land Rover North America.

Land Rover TReK is a one-day vehicle-based competition that puts teams through a wide variety of challenges based on off-road driving, off-road recovery, navigation, brand knowledge, and teamwork. Being physically fit, mentally sharp, and a strong team player are all necessary skills to do well at TReK. 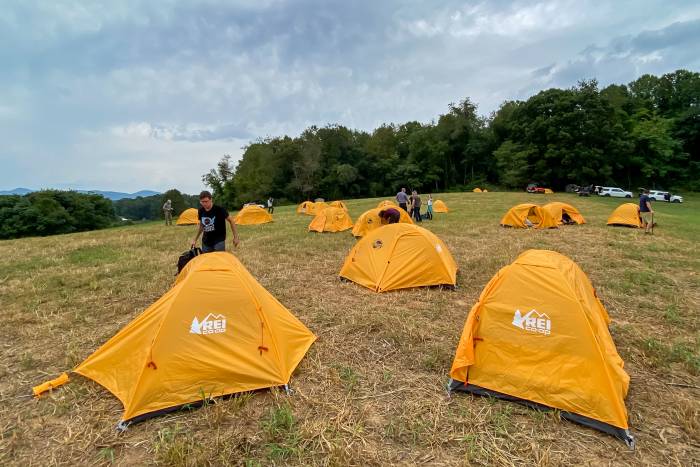 Upon arrival at base camp in the middle of the sprawling Biltmore estate, we were greeted with TReK-edition tents (the three-piece camping starter set from REI with TReK branding). These tents would be our home for the night and were required as the skies opened up and the typical East Coast downpour came down on us all night long.

The team to beat was obvious to everyone involved. A large Outside TV film crew consistently surrounded the all-women team. It consisted of Olympic skier and Land Rover ambassador Lindsey Vonn, high-altitude ski mountaineer Hilaree Nelson, and ESPN journalist and experienced navigation rally competitor Alyssa Roenigk. They called themselves Team Rocky Road and put in a strong effort in the competition.

The special tasks/challenges spread across the Biltmore estate are what the TReK competition is all about. Each task is worth a different point value, and we had no clue what the tasks would be beforehand. On the map we were given, we only got a fun task name and a GPS coordinate. 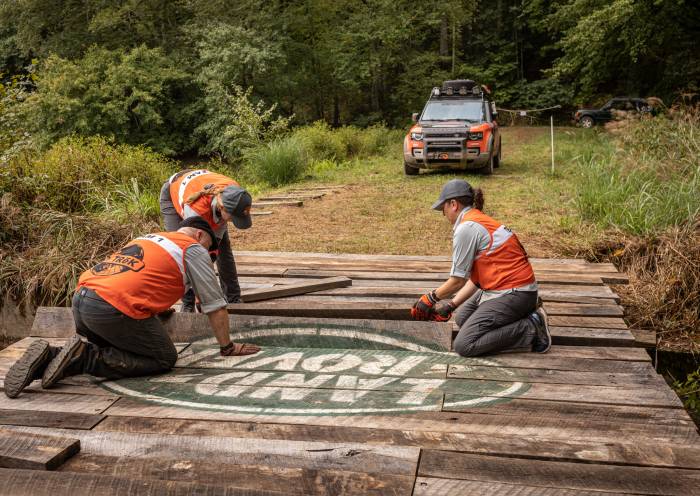 While the aforementioned trailering and bridge tasks were challenging and fun, there was much more in store for us throughout the day. It was impossible to get to all 14 challenges in the allotted time, so it was vitally important to choose the right ones.

Our team went for big points early and headed immediately for the opposite end of the course from where we figured most competitors would start. 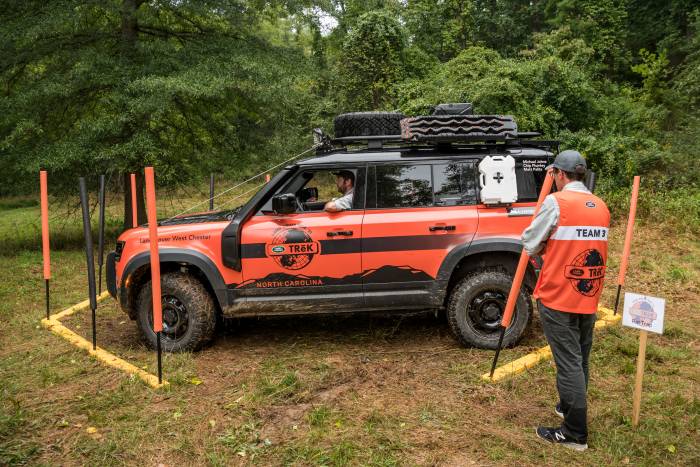 Rat Trap was the only challenge that truly beat our team. It involved rotating the Defender around 360 degrees within a very tight octagon with vertical poles, without hitting the poles. While it sounds easy, it’s most definitely not. The only way to do it is to do a million-point turn, Austin Powers style, and hope you did each of them just right. We did not, got a bunch of penalties, and wasted a lot of time.

While the bridge-building task was super physically challenging, it was nothing compared to the 2 Car Lengths challenge. This is the dreaded use of a Hi-Lift as a come-along challenge. The task was to move our Defender two vehicle lengths up a steep slope backward.

The task required some basic off-road recovery knowledge, solid communication, and a ton of physical effort. We were on the clock and had to do it in under an hour, including rigging everything up and putting it all away. We managed to set the fastest time of the day, but our bodies felt the effort for days afterward.

Some big point challenges required two teams to work together. We did the highest point option on offer, teaming up with team S2K to get the most points possible. It was a super fun double winching challenge that required precise teamwork and some outside-the-box thinking.

My only disappointment about Land Rover TReK 2021 was that there was no mountain biking, kayaking, or real running. Those are normal elements of the competition, but from what I understand, the organizers couldn’t gather enough gear to make it happen. I guess that’s just the insane supply chain shortage world that we now live in. 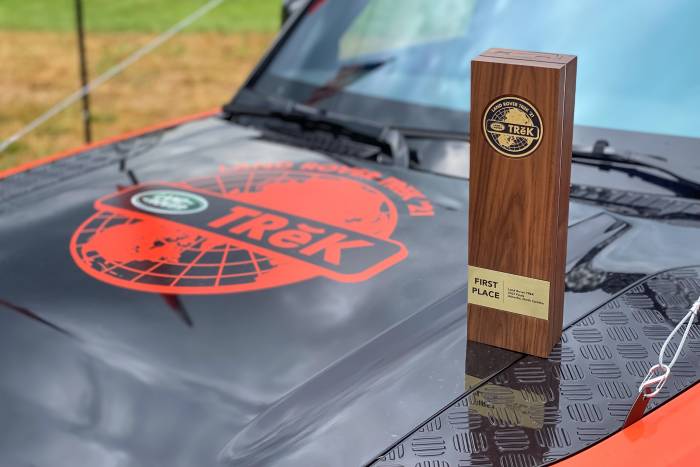 A real sense of accomplishment and exhaustion set in after all the teams rolled into base camp before the time cutoff. But everyone was itching to see how their efforts from the day panned out in terms of the competition. Could anyone beat Vonn’s Team Rocky Road?

After the results were announced from last to third, we knew we, Team No Time To Cry, had a top-two result, alongside Team Rocky Road. After holding our breaths, the next announcement came: We had won the media wave of TReK 2021!

We congratulated Vonn and her team and then shook our heads in disbelief. Not only had we won with 221 points but had won by 57 points over the second-place team. That was especially surprising given that there was only a five-point spread from third to fifth place.

I’m extremely proud of having this opportunity and competing alongside such awesome people. The camaraderie in my team, and across teams, was such a breath of fresh air in the divisive world we live in.

While we won the media wave of Land Rover TReK 2021, the real winners this year are the Land Rover Rochester team. They beat out 69 other retailer teams to take the overall competition win. With a prelim round and then a final, the team worked hard and fought a close battle, with Land Rover Riverside in second place and Land Rover Buckhead in third. 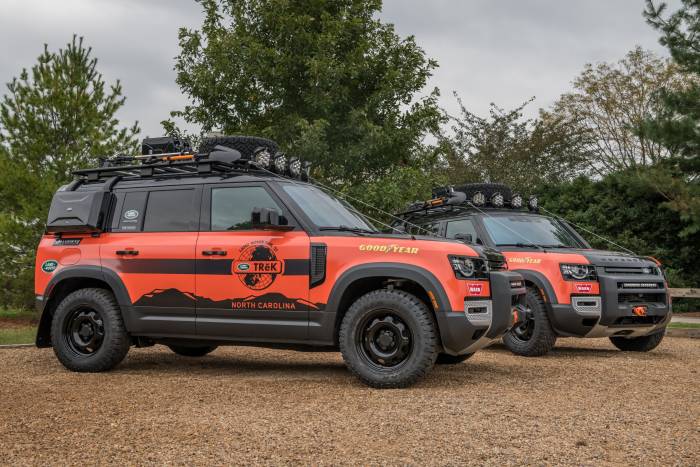 The star of the TReK competition is the Land Rover Defender 110 P300. The truck we competed in has the new 2.0L inline-4 under the hood and was fully kitted out with all the off-road accessories you would want, many developed by the Land Rover aftermarket experts at Lucky8 Off Road.

We found special custom touches throughout these very cool off-road machines. Each Land Rover Defender TReK edition truck has special TReK logos in the exterior wrap, mud flaps, rear ladder, rear metal Defender badge, a plaque under the hood, the gear selector surround on the dash, on the built-in air-compressor in the cargo area, and even holograms on the B-pillar inside the doors.

And how can you not like the orange-and-black color scheme, with black steel 18-inch wheels! 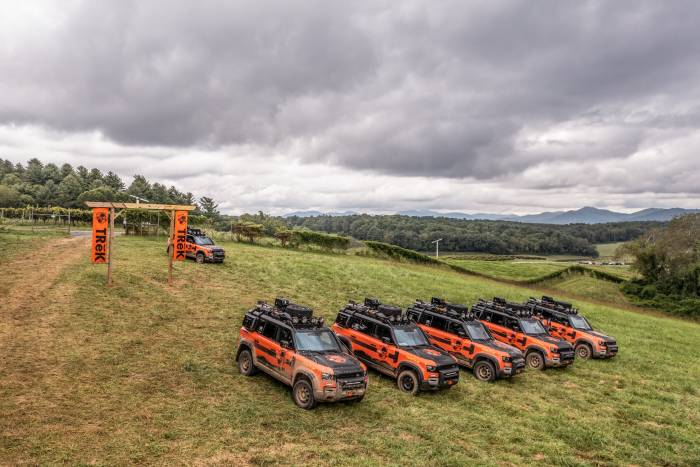 There are only 70 limited-edition TReK 2021 Defenders. Each dealer in the competition bought their own built machine and gets to keep it or sell it. These trucks will be a hot commodity on the used market for years to come.