Thirsty? Pop this edible water balloon into your mouth and swallow the whole thing — no plastic, no waste. 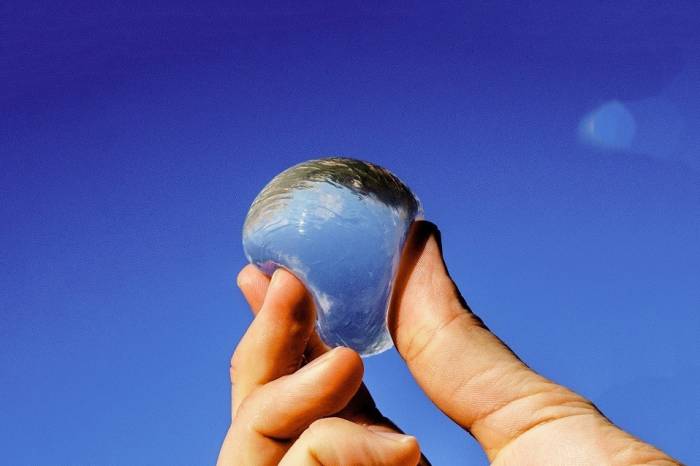 Something’s gotta give. Upstart renewal packaging manufacturer Skipping Rocks Labs believes it has the answer: Biodegradable “bottles” you can eat.

Originally unveiled in 2014, the company’s Ooho concept garnered small internet fame, but was mostly conceptual at the time. But this week, Ooho launched a crowd-investment campaign to ramp up production.

The era of plastic water bottles may be drawing to a close.

The unusual tech is based on seaweed. The principle involves dipping a ball of ice in a mixture of calcium chloride (a common food additive) and brown algae extract. As the ice melts, the membrane stays intact, creating a gelatinous, contained ball of water.

While the Ooho is edible, it’s not necessary to eat it. The brand likens the plant-based packaging to a fruit peel. It’s safe to consume, but equally suitable for composting. The algae membrane decomposes in four to six weeks.

The best news for eco- and thrift-conscious consumers is that Ooho claims to be cheaper than a plastic bottle. There is no word on exactly how much Ooho costs, but Skipping Rocks Labs work the last two years focused on refining production and reducing costs.

The brand expects Ooho to be a hit with endurance athletes and festival-goers. Plus, for athletes interested more in energy drinks than water, the same technology works for other liquids.

We haven’t tried these yet, but look forward to chomping into one of these water balls soon.

Up Next: What to drink? If Your Sport Was A Beer

Saving…
What to drink? If Your Sport Was A Beer
Space Beer Has Landed!
×